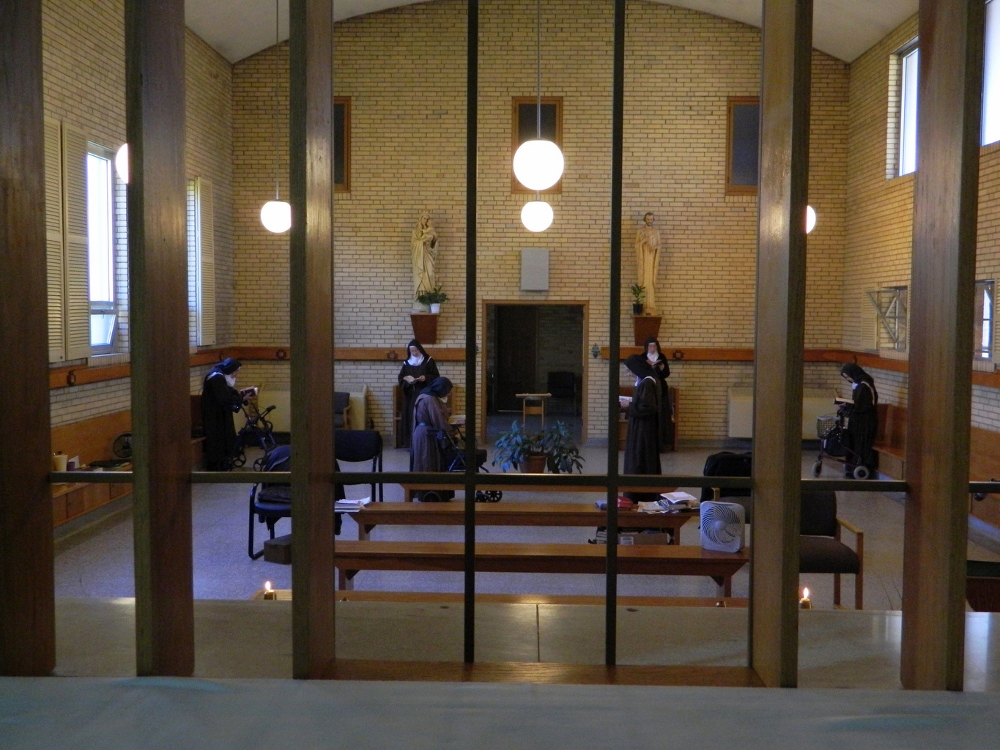 Seen through a divider of wood and metal bars, cloistered nuns sing vespers March 30, 2015, in the chapel of the Carmelite Monastery in Louisville, Kentucky. On March 28, the nuns celebrated the 500th anniversary of the birth of their order's foundress, St. Teresa of Avila. (CNS photo / The Record / Marnie McAllister)

St. Louis, Missouri — More than a year after Pope Francis issued new guidelines for contemplative women religious, leaders of those communities are still working to figure out what changes will be required.

In July 2016, Francis issued Vultum Dei Quaerere ("Seek the Face of God"), an apostolic constitution for communities of women who live in cloisters or whose lives are devoted mainly to prayer rather than outreach or ministry.

Benedictine Sr. Nancy Bauer told attendees at the Resource Center for Religious Institutes' National Conference Nov. 1 the new norms will not take effect until the Congregation for Institutes of Consecrated Life and Societies of Apostolic Life delivers instructions on how to implement them. There has not been any indication of when those instructions may be delivered.

Nearly 600 sisters, priests, brothers and lay people are attending the conference, which runs from Oct. 31 to Nov. 3, with sessions on topics such as the legal and canonical implications of governance decisions when a community is approaching completion. Bauer is a canon lawyer and an assistant professor of canon law specializing in consecrated life at The Catholic University of America.

Bauer noted the modifications made by Francis continue a succession of the changes made since those issued in 1950 by Pope Pius XII, which were the first since 1298 to loosen rules regarding cloister rather than making them stricter.

"There's a development. It's not like Vultum came out of thin air," Bauer said. "Over the centuries, the rules for cloister have become stricter and stricter, and what Pius was saying was that some had become too isolated and some had become economically destitute."

Francis' apostolic constitution calls on the women religious worldwide to first reflect on 12 aspects of the monastic tradition — formation, prayer, the word of God, the sacraments of the Eucharist and reconciliation, fraternal life in community, autonomy, federations, the cloister, work, silence, the communications media, and asceticism — and then implement changes to address them.

One of the most troubling, Bauer said, is his directive to increase the time candidates spend in formation to at least nine years and no more than 12. Currently, the maximum is generally nine years.

"It's not good for someone to be in a temporary situation that long. It leads to discouragement," Bauer said. 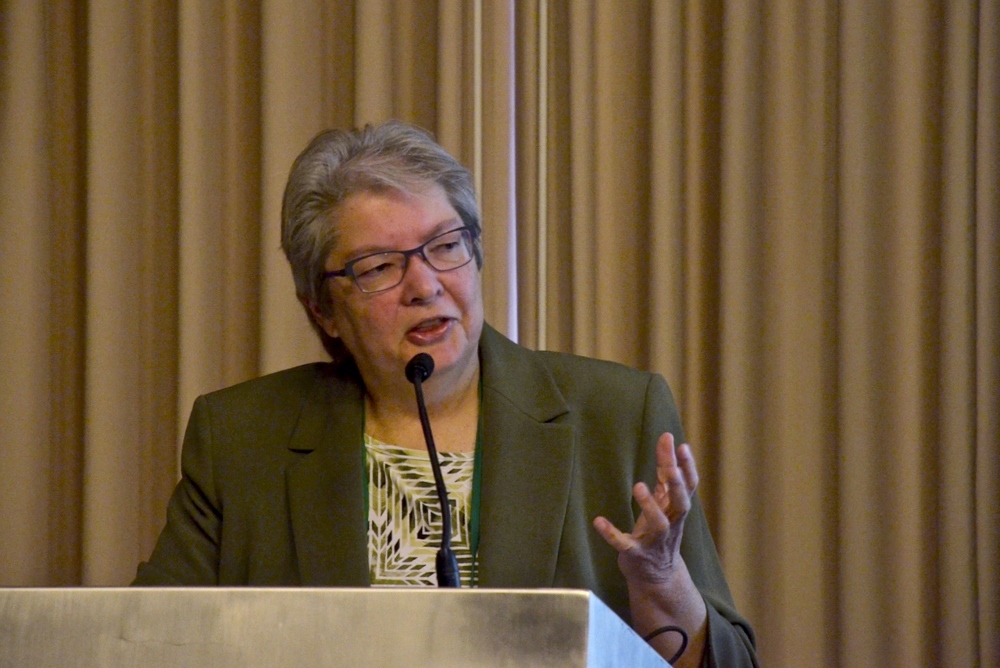 Sharing outside the community

Other changes that will have a big impact on communities include Francis' call for the use of Lectio divina, the traditional Benedictine practice of scripture reading, meditation and prayer. And not only are they to adopt the practice if they don't already use it, but they are to share it with priests, other religious and lay people.

Each community is to determine how to do that, Bauer said, but it could include writing.

"They spend all these hours in study and contemplation of the Scriptures, but rarely are their insights written for anyone to see," she said. "I think it would be marvelous if the church and the world could benefit from the fruits of their spiritual life."

Along the same lines, Francis calls for communities to engage in Eucharistic adoration, and also to share it with the local church communities. It remains to be seen how that will be accomplished by those living under strict cloister, Bauer said.

"For centuries we heard 'Enclosure! Don't go out, don't let others in,'" Bauer said. "Now Pope Francis is saying, invite people in for Eucharistic adoration."

But there is much to celebrate, as well, she said. The section on community life calls for those in authority to foster a joy-filled environment of freedom and responsibility, to promote personal and community discernment and to promote truthful communication of what each person does, thinks and feels.

"There are monasteries where, even after decades of living together, the sisters really do not know each other because they're discouraged from expressing themselves," Bauer said. "A community can be harmed by individualism, but it can be enhanced by responsible individuality." 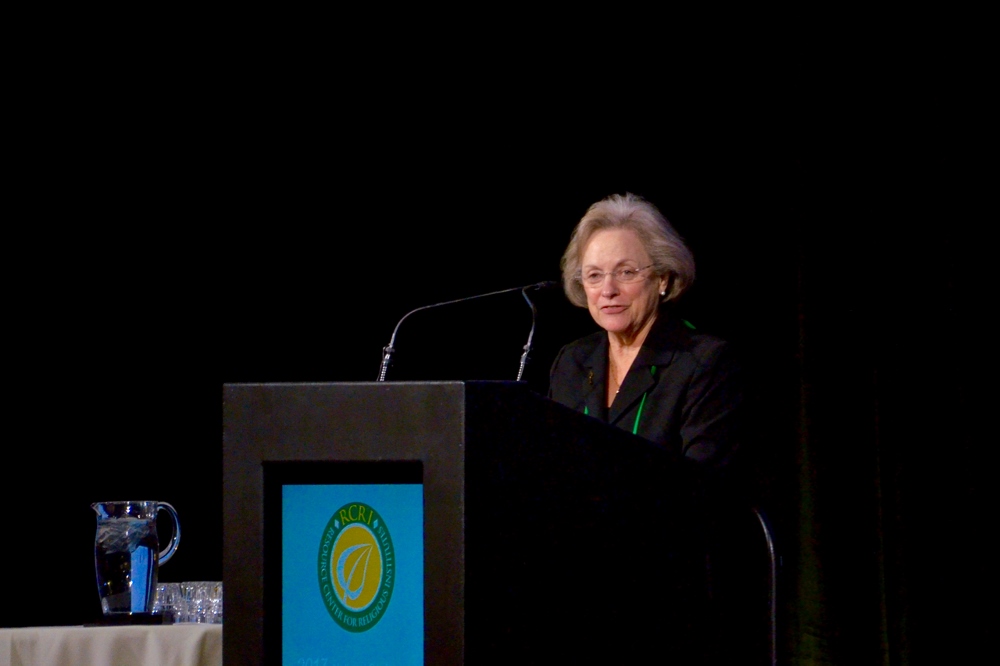 Bauer also contends that the provision causing concern for many communities will actually do the opposite of what they fear: The pontiff calls for every community to join a federation of monasteries, unless they get an exception approved by Rome. The federations will allow the sharing of resources, including formation efforts, and even the exchange of nuns.

Many fear that will lead to a loss of autonomy, but Bauer said Francis makes a distinction between juridical, or legal, autonomy and a genuine autonomy of community life, which has vitality and capacity for things such as formation and governance.

"They fear [federations] will decrease their autonomy, but I think that fear is unfounded" because the norms state they exist to increase autonomy, Bauer said. By strengthening bonds between communities and being able to share resources, monasteries will be able to have a genuine autonomy of life, rather than just legal autonomy as they slide into completion.

There are also conspiracy theories, she said, that the federations are "a plot by Pope Francis to force the more conservative monasteries to become more liberal," she said. "We laugh, but I don't want to make light of it because there is a legitimate fear they will have to join in federations with monasteries that do not share their more traditional ways."

The conference began with a keynote address by Dr. Carolyn Yauyan Woo, former CEO and president of Catholic Relief Services. Woo was scheduled to talk about how the agency reaches out to the poorest and most vulnerable, but she changed it when she saw the theme of the conference was "Changing Times: Challenges and Transitions," and instead talked about transformations and ensuring organizations remain relevant.

"The question is not, 'What do we do?' but 'What must we do?'" Woo said. "What can we not accept? What offends your sense of fairness, of goodness, of justice? Changing times call us to ask that question: What must we do, and are we relevant to what needs to be done?" 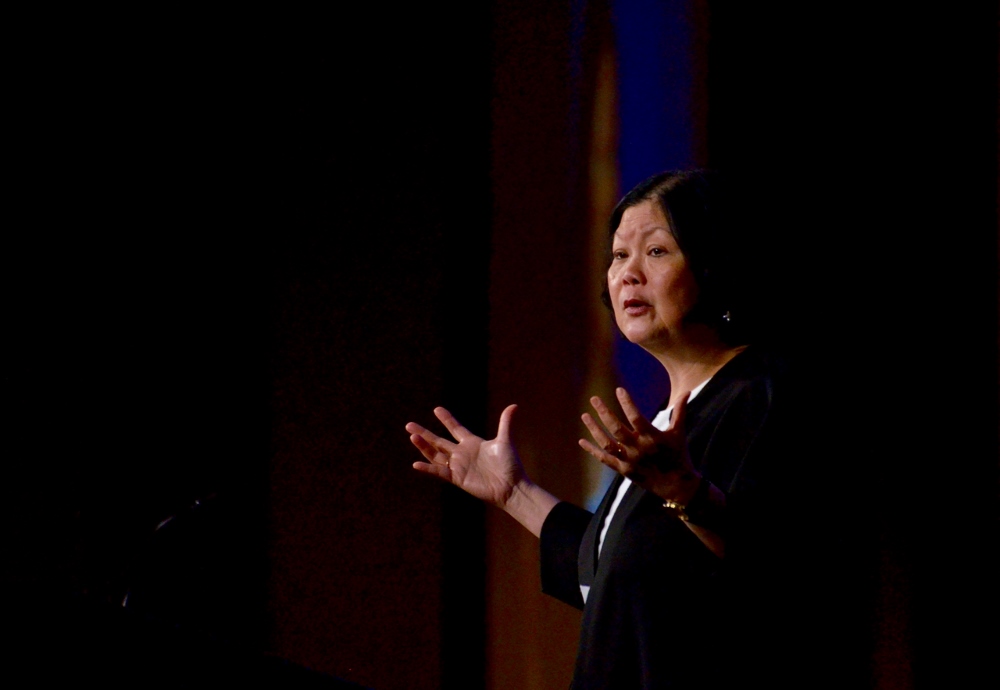 Q & A with Srs. Eileen Reilly and Winifred Doherty, teaching others to be global citizens

Archbishop warns of 'balkanization' in US church