Shannen Dee Williams stumbled on the subject of black nuns by accident. Later, she would wonder if she had done the right thing by digging further.

“Had I known what I was going to uncover, I probably wouldn’t have done this project,” Williams said. “I was naive. I didn’t get it.”

What she didn’t get – what she never expected to find – was that the history of black women religious in the United States is replete with shocking examples of racism, racial segregation and marginalization, perpetuated by their white religious leaders and peers. At their peak around 1965, there were about 1,000 African-American sisters, Williams said, but there are only about 300 today.

Her project was first her doctoral thesis and is now a forthcoming book, Subversive Habits: Black Nuns and the Struggle to Desegregate Catholic America after World War I. Last week, she presented some of her research at “The Nun in the World: Catholic Sisters and Vatican II,” international symposium at the University of Notre Dame’s London Global Gateway campus, hosted by the university’s Cushwa Center for the Study of American Catholicism.

Williams is an assistant professor at the University of Tennessee Knoxville, where she teaches courses in U.S., African-American, women’s, civil rights, and religious history. When Subversive Habits is published, it will be the first historical monograph to examine the lives and labors of black Catholic sisters in the 20th-century United States.

Williams discovered the topic while a graduate student nine years ago researching something else: The history of her mother, who, in 1972, was the first African American woman admitted to Notre Dame. Though the distinction was a source of family pride, her mother always changed the subject.

“She does not speak about it,” Williams said. “It is unspeakable. The most she would ever say is she didn’t want us to go to Notre Dame.”

In her research, Williams came across a news item about the 1968 creation of the National Black Sisters Conference. Intrigued, she wrote to some of the founders, mainly just to see if they were still alive. Then the letters started pouring in, saying things like, “We’ve been waiting on you. We’re so glad someone’s trying to tell our story.”

Their stories were heartbreaking, she said, and she’s been collecting oral histories ever since. Soon she was at Marquette University in Milwaukee, researching the papers of the NBSC, which are collected there.

She found stories like that of School Sisters of Saint Francis Sister Daniel Marie Myles, who entered her community in 1949 said of her postulant days, “I tried to act and talk and live white, because it was the only way I’d be accepted at all in the convent. And I forgot my own culture, my own black parents down South, and tried my best to be what the white nuns wanted me to. . . . The other sisters always laughed at me for the way I talked and walked. And I tried not to resent their laughter. In fact, I tried to laugh right along with them.”

Williams said the few communities that have publicly acknowledged and confronted their past admit that when they did allow black women to enter, they tried to turn them into white women, and that it was a mistake.

There’s a reason there are so few black sisters today, Williams said, and the reason is that for about a century – from the Civil War until the 1970s – they were often either kept out of religious life entirely or they were forced or hounded out later.

“How am I a cradle Catholic and never saw a black nun until nine years ago?” Williams said – a fact especially troubling because her research into black women religious shows they date to St. Ifeginia, an Ethiopian woman converted to Christianity by Saint Matthew, who founded a convent of 200 women in the 1st Century.

“Their history in religious life is not new,” Williams said. “There is a black Catholic tradition that is old, that goes back to the beginnings of the church. They should not be treated as something new.”

Williams’ comments on black sisters were echoed by Franciscan Sr. Jannette Pruitt, who is the coordinator for black Catholics in the Intercultural Ministry office of the Archdiocese of Indianapolis, and a board member of the NBSC.

Pruitt said she grew up taught by white nuns in Bay St. Louis, Mississippi, in the 1950s and always wanted to join them.

“The white sisters raised us, they were with us and taught us, but they saw us a different way. I always wanted to be a sister even before my First Communion, but they wouldn’t let me, and didn’t tell us where we could go to become a sister,” Pruitt said. “So I found myself thinking that’s not for me. . . . I never saw the black sisters until I was older, I didn’t know they were just across the water in New Orleans.”

But the call never left her, and after raising a family, she joined the Franciscan Sisters of Oldenburg, Indiana.

Williams said the record shows that in the late 1800s, many religious orders in the United States specifically excluded black women. Sometimes black women formed their own orders – Williams said nine historically black orders were founded, of which three still survive – and black women founded two other orders that were predominantly white.

When black women were barred from entering a white congregation, Williams said, they were sometimes told to seek out the black orders, but other times were not, because the rejecting congregation didn’t want other sisters to know they were segregating. Others admitted black sisters, but later wrote them out of their histories.

After World War II, some white orders slowly began to accept black sisters, but they were treated like Myles was, Williams said, or worse. One black sister reported that every time she moved, they burned her old sheets because no one else would sleep on them; white sisters refused to use the silverware she used. Some orders accepted black sisters but made them take their vows separately, in the sacristy.

And when the civil rights movement began, things got even worse.

Black sisters who became outspoken about civil rights were often pushed out or hounded to quit. One had her final vows delayed seven years, some had their final vows delayed indefinitely. Ironically, some of the worst actions were committed by orders that included sisters traveling to Selma and other hot spots to fight for civil rights.

Williams said that the oral histories she has collected and the papers collected by the NBSC show that when the Rev. Martin Luther King Jr. was killed in April 1968, some convents celebrated. Soon after, Williams said, black sisters began leaving religious life at double the rate of their white peers.

“At one convent they heard the news on the radio and the mother superior turned the station as if nothing had happened,” Williams said she found in her research. “At another, one of the white students stood up and said, ‘Well we got him, which one’s next?’”

So many black sisters were leaving, Williams said, that then Religious Sister of Mercy Martin de Porres Grey founded the NBSC in 1968 and became its first president [Grey later left religious life to get married, and now goes by Patricia Grey].

It is the sisters who stayed and persevered who keep her going, Williams said.

“It’s a powerful history, a powerful story and I’m honored to write it,” she said. “But at the root of it is faith. . . . I’m staunchly Catholic – you’ll have to drag me out – because these women and their faith demand it.”

Pruitt also said it was her faith that sustained her, even when rejected by white sisters.

“We’re here, we’ll always be here. It’s our church. All the stigma, all the things that go on that are not so great within the church, we still hold our own,” Pruitt said. “God said, ‘My church is going to come to me without spot or blemish,’ and those words resonated with me. . . . The Catholic church is my church, it’s universal.”

Williams said that despite all she has uncovered, there is not only hope, but great reason to hope.

“Sisters are so diverse, but they all agree that racism has no place within the church, and that’s different – that suggests the future is going to be OK,” she said. “There will always be challenges, but if you start from that fundamental understanding that there is no place for segregation and racism in the church, that’s a different starting point than 50 years ago.” 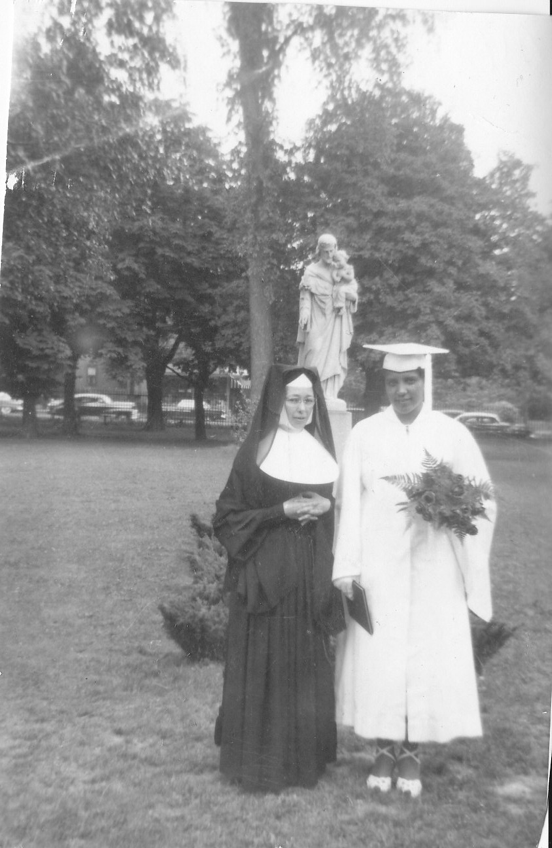 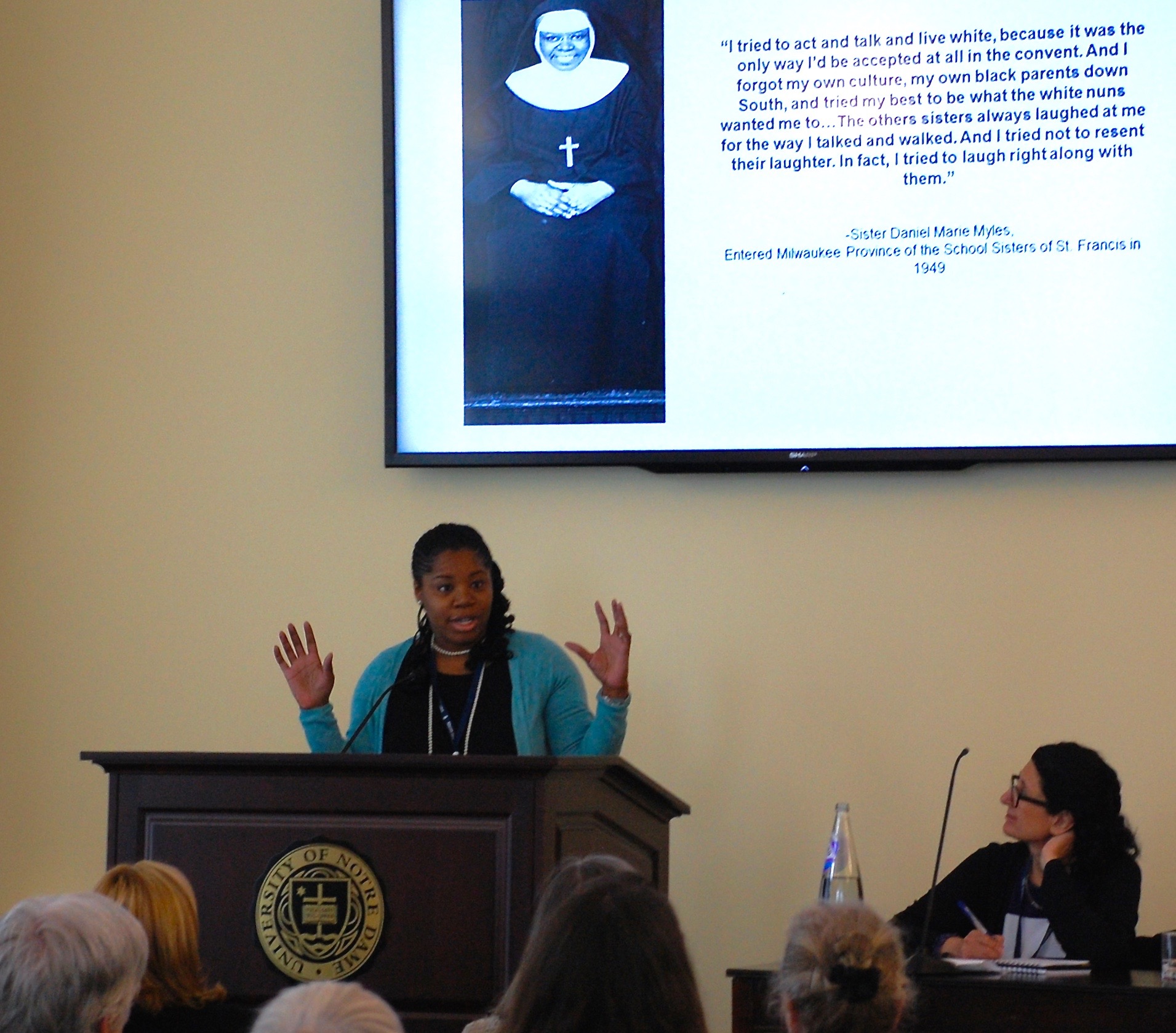 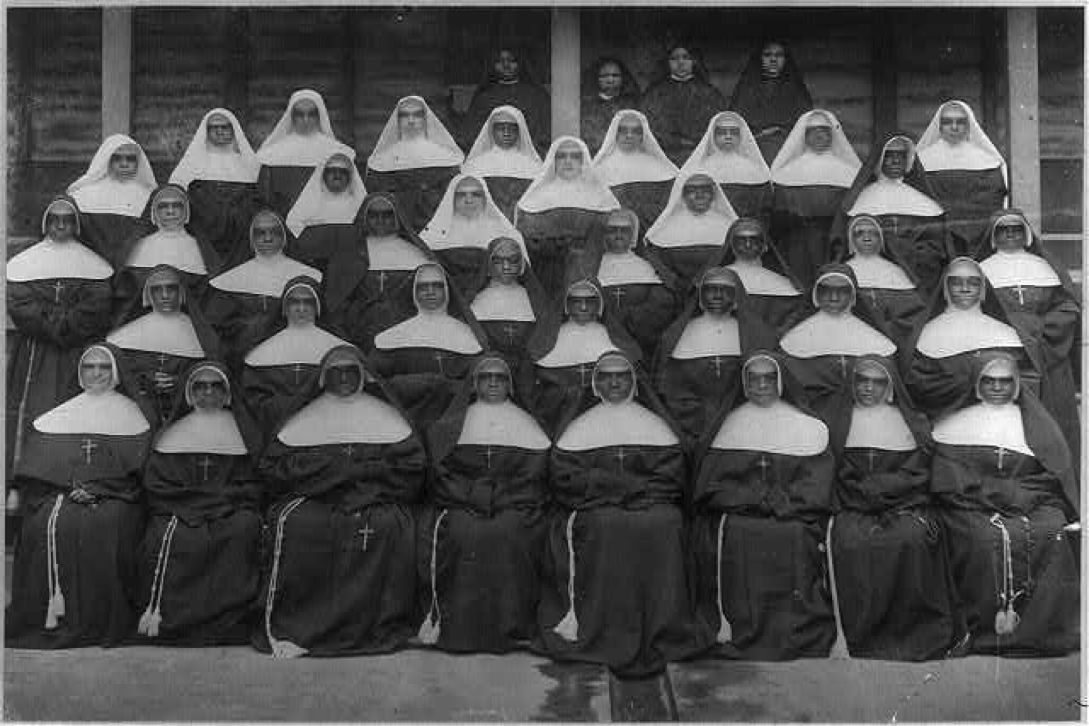 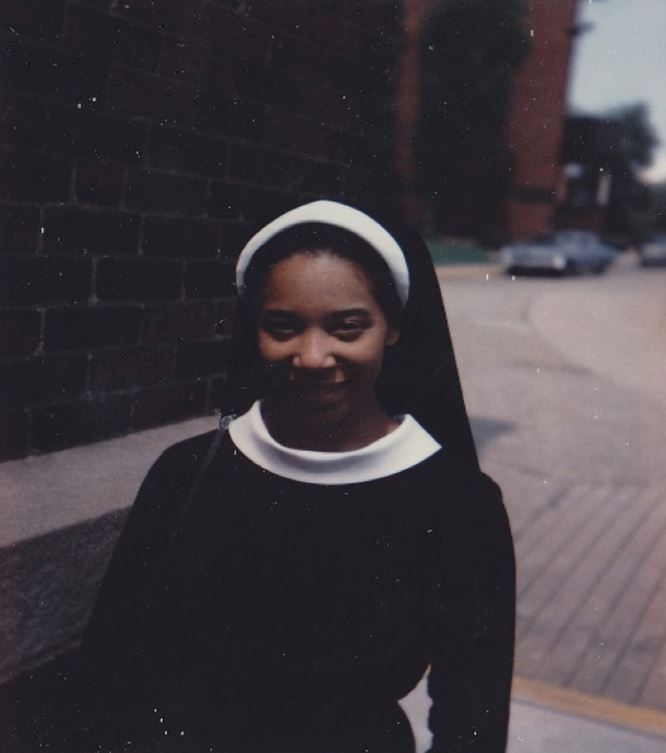 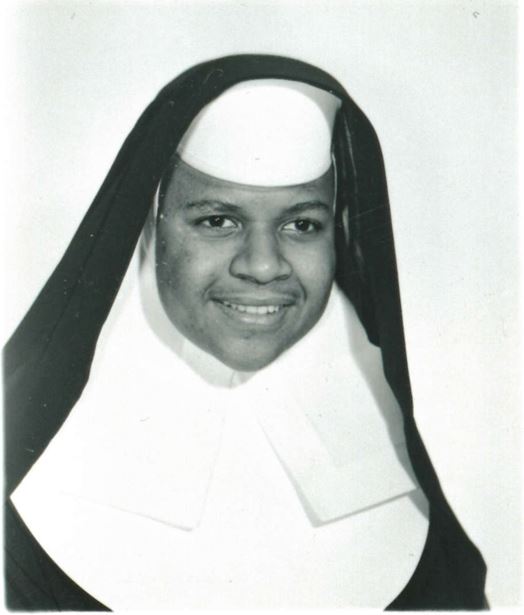 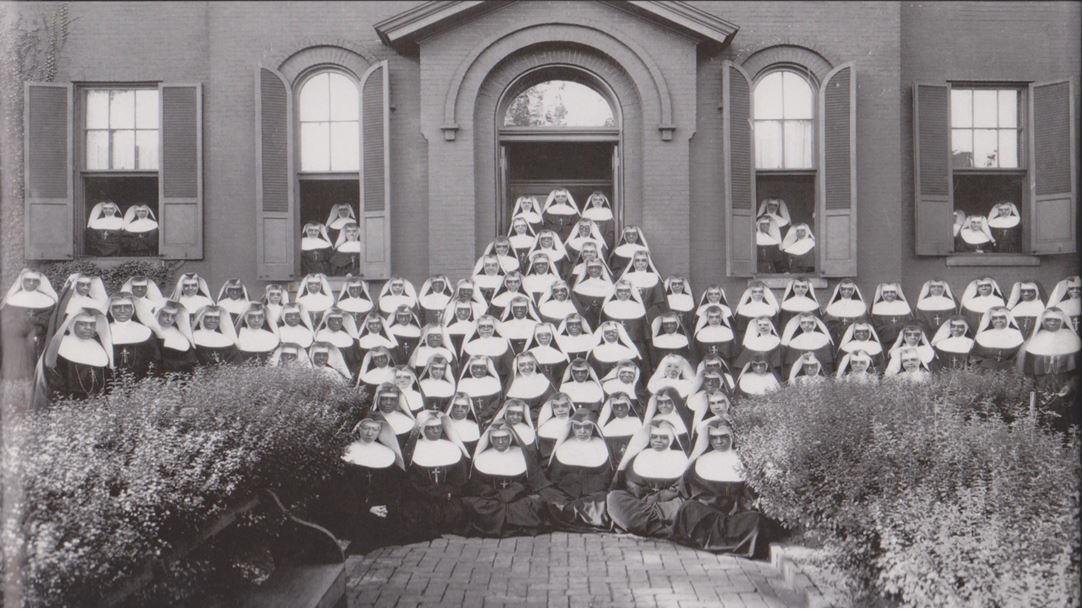 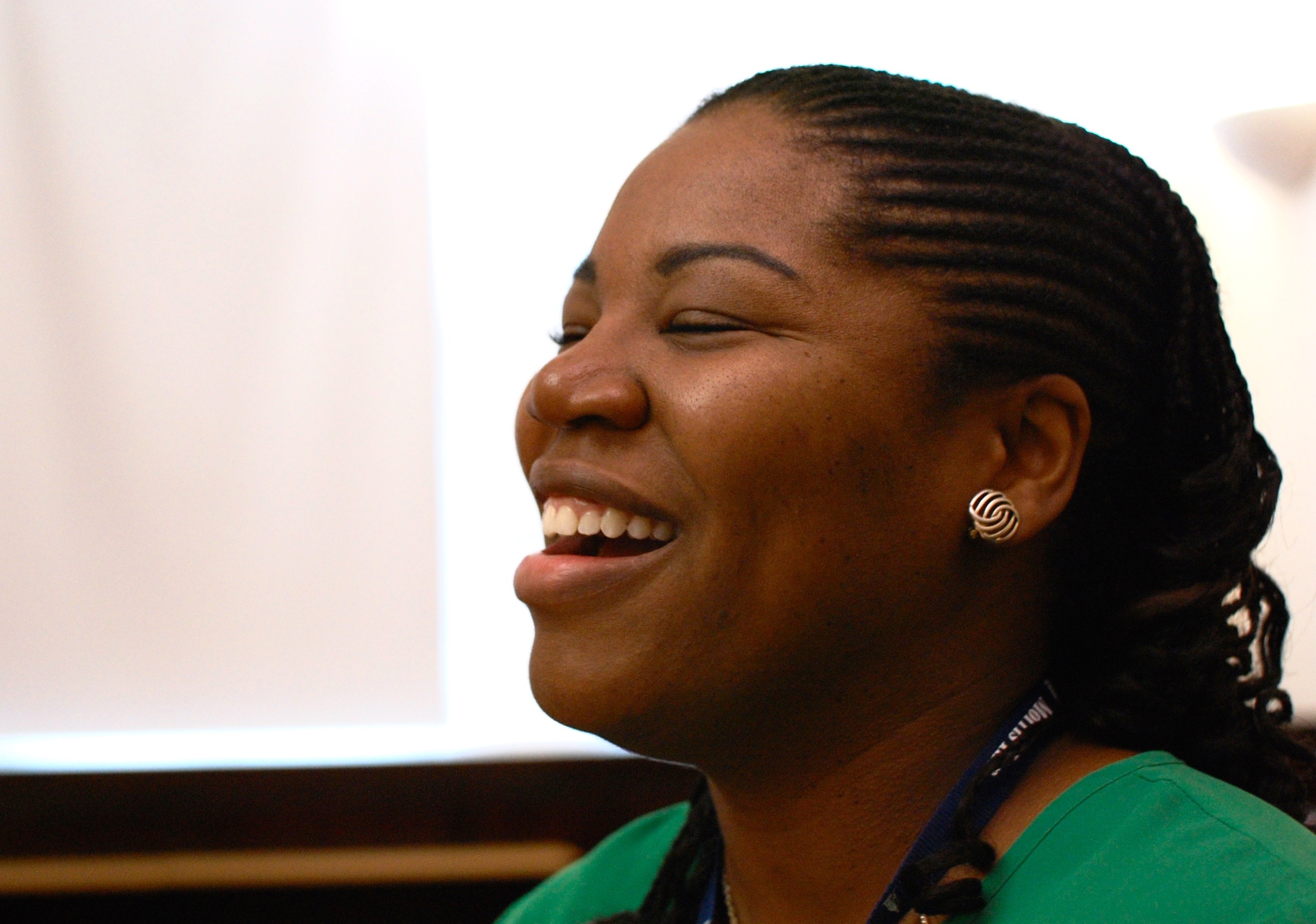