Respecting differences. Communicating clearly. Adjusting formation programs to create connection among novices and postulants from various cultures. Extending such awareness training to older members of the community. Remembering that Christianity and the Catholic Church are rooted theologically in international mission.

These were some of the key points discussed Nov. 5-10 during the Council of Delegates meeting of the International Union of Superiors General (UISG) in Manila, which was focused on the theme of "building community in an intercultural world."

The meeting opened with symbolic presentations of colorful scarves, netting and other cloths the 45 delegates who attended brought to represent their regions, joining them together to "weave" global solidarity as they began the weeklong series of sessions, which sister volunteers translated into English, Spanish, Italian and French.

Building on the UISG plenary in May 2016 in Rome and in preparation for the upcoming plenary in May 2019, this halfway-point meeting was to assess how the 36 regional groups, or constellations, across the globe are doing and to get input on the organization's structure, plans and programs. There are 52 delegates total, representing congregations in 115 countries.

Sessions included updates on UISG programs and goals, an overview of the Vatican Commission for the Protection of Minors and the role sisters can play in protecting children and vulnerable adults, and visits to some congregation ministries in Manila.

Even congregations with members from the same country are often made up of different ethnic groups, "and sometimes it is more difficult to live together from one country than from many," Sammut said. "These difficulties often turn around money, power, ethnic superiority — topics we are often ashamed to speak about and so remain unspoken. In the meantime, there is much suffering and unevangelical behavior."

A series of speakers, including a panel of four young sisters from Asia, addressed interculturality in depth. Fr. Anthony Pernia, the dean of studies at the Divine Word Institute of Mission Studies, said the goal is to move from being multicultural — people of different cultures in the same group — to intercultural, so the various communities enrich each other.

Making several theological points about multiculturality, he said it isn't just about the human experience. "It is about God, about the mystery of God," he said. "We encounter the God of mystery only if we encounter others who are different from us."

"Each member needs to be convinced that internationality or interculturality is an ideal to be sought after or a value to be promoted," he said. "Intercultural communities do not come about automatically just by simply putting together under the same roof people from different nations and cultures."

Our instinctive response is exclusion, he said, which is "far easier than inclusion. Exclusion is simple and less complicated, less demanding, less disconcerting, less painful. Once we reject others, we don't have to deal with them anymore," he said. Inclusion is complicated, requiring change and taking into account others' experiences and history.

Formation programs ideally should have candidates for religious life experience living in an intercultural community or training program, he said in response to a question.

Sr. Christine Burke was province leader for the Institute of the Blessed Virgin Mary sisters in Australia, Vietnam and East Timor from 2005 until 2011, then moved to the Philippines in late 2013 to start a house of studies for younger sisters from the province. There, she pioneered a shared community with a group of Congregation of Jesus sisters from Korea and China.

"We're different ages and cultures and presumptions of religious life," she said. While the experience has been enriching, "it has been a challenge to live together in one community."

Differences in culture — on the importance of tradition, deference to elders and authority, fear of making mistakes versus taking risks — are evident, Burke said. There's even a big difference in the understanding of religious life because there are not as many translations of books and articles about the Second Vatican Council available in Asian languages as in English and European ones.

In response to questions she posed to them, Burke said younger sisters in her current community said communication and potential miscommunication is a big challenge. Beyond language, experiences with repressive governments or war can also affect sisters' willingness to communicate openly. Despite the challenges, Burke said the sisters noted they appreciate the opportunity to let others' cultures widen their thinking and deepen their own self-understanding.

Sr. Eden Panganiban, who has held several leadership positions with the Missionary Sisters Servants of the Holy Spirit, gave an overview of the cultural changes within the congregation and an acculturation process that the Philippines North Province community uses in welcoming sisters from other countries.

For example, the Missionary Servants of the Holy Spirit were founded in Germany 128 years ago, and, until 15 years ago, Germans were the largest ethnic group in the congregation. By the end of 2016, Indonesians were the largest group in the 3,045-member congregation with 763 sisters (25 percent), followed by Indians at 13.6 percent and Germans at 11 percent. Fifty-one nationalities are represented among the 427 Missionary Sisters Servants of the Holy Spirit communities around the world, based in 49 countries.

The Philippines North Province has received 100 sisters over the past 10 years, most from other communities throughout Asia for university study, formation courses, to learn English or for cross-cultural mission experience. Currently, the province's 162 sisters are from 12 nations, with Indonesians and Vietnamese being the largest.

While the integration process is fluid, depending on an individual's needs, language proficiency and experience, Panganiban said there are four distinct parts to the process. The first two steps provide basic information about the community and sensitivity training to appreciate cultural differences through formal sessions or informal exchanges. A third step is guided immersion, or "learning by doing," which helps foster a sense of belonging and addresses culture shock. The final step is gaining proficiency in the local language, which facilitates adjustment and enhances social skills.

But key to all of the steps is the individual's attitude, she said: her openness to what's new and different and their acceptance of others. Seminars on effective intercultural living, differences in communication styles, developing empathetic listening and other skills are helpful.

The panel of four younger sisters shared their experiences living in multicultural communities in the Philippines. Sr. Marysia Malating, who made her perpetual vow in 2014 as a Franciscan Sister of the Immaculate Conception and is studying theology at the Institute of Formation and Religious Life, lives with sisters from six congregations and eight countries: Cameron, Chad, Korea, Malaysia, Papua New Guinea, the Solomon Islands and Vietnam.

Growing up in a small village in Malaysia, she said she had to overcome a limited view of the world and a conviction that other cultures were inferior.

"Narrow-mindedness kills community life," she said. "Openness of mind helps me to see the richness of other cultures, and it invites me to accept them and draws me to love them."

"Its whole intent is to have this global solidarity network," said Siemen, whose congregation has more than 600 vowed women religious and 200 associates who minster in five countries. "Just the experience of being day-in, day-out and having conversations with sisters from five continents — there's a breadth of experience here and universality of the church that I haven't seen before."

The sessions on interculturality were relevant even to congregations that are in only one country, said Sr. Illumina Virginia Jenny Katsukunya, superior general of the Little Children of Our Blessed Lady , which is in four dioceses in Zimbabwe.

"At first, I didn't think this applied to me," she said. "But differences in language and attitudes occur even within a country."

In other sessions, Sr. Pat Murray, executive secretary of UISG, recounted the organization's progress on strategic objectives approved at the last assembly. One key objective — raising the profile of UISG and, by extension, that of women religious within the Vatican and major Catholic organizations — involves strengthening ties with national and regional religious conferences and Catholic organizations such as Caritas Internationalis, Jesuit Relief Services, Pax Christi and others.

"More and more, our visibility has increased as women religious, and we are constantly being invited to participate in Vatican meetings, commissions and working groups," she said. "This is a change."

In addition to standard Vatican meetings, UISG has been working with the Congregation for Institutes of Consecrated Life and Societies of Apostolic Life to develop a document to replace Mutuae Relationes, which outlines the relationship between bishops and orders of religious. (Pope Francis called for the update in November 2013.) It has also been working with the new Dicastery for Promoting Integral Human Development.

Ongoing projects, such as the anti-human-trafficking network Talitha Kum and the Sicily Migrant Project, continue to expand. The canon law program — which includes the UISG council, workshops and scholarships for some women from Eastern Africa studying canon law — and theological training of sisters under the Regina Mundi project fulfill UISG's objective to support members and contribute to religious life, she Murray said.

At the end of the week, in a ceremony filled with joy and laughter, the sisters presented the cloths they had brought to one another. They shared prayers written on paper in the shape of footsteps, symbolizing steps forward they would take themselves and in their constellations.

Strengthened by the meeting, the sister leaders planned to help their communities and missions face the challenges Sammut laid out in her opening remarks. Digital technology is changing the nature of relationships, allowing people to connect more than ever, even as countries grapple with massive migration flows because of political unrest, ethnic and religious conflict as well as a shift politically to the right with nationalistic attitudes that keep out refugees and migrants, she said.

"In front of these enormous problems, we have not given up," Sammut said. "We have the courage and perseverance to continue working in order 'to welcome the stranger, to feed the hungry, to liberate the captive,' as Jesus has told us. And to be more effective, we are determined to do it together."

[Gail DeGeorge is editor of Global Sisters Report. Her email address is gdegeorge@ncronline.org. Follow her on Twitter @GailDeGeorge.]

Read next: UISG's spirit manifests in connections that sisters forge during Manila meeting 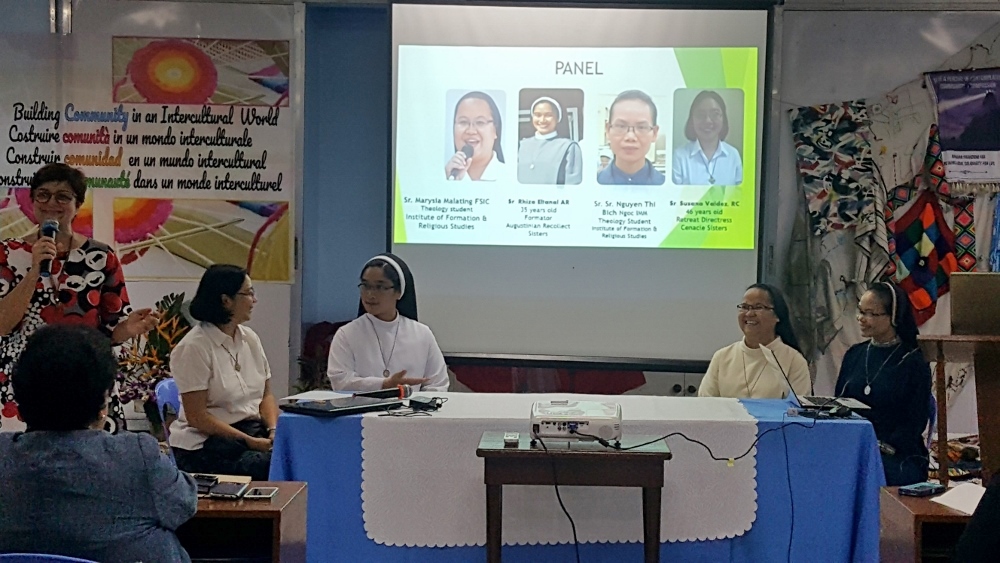 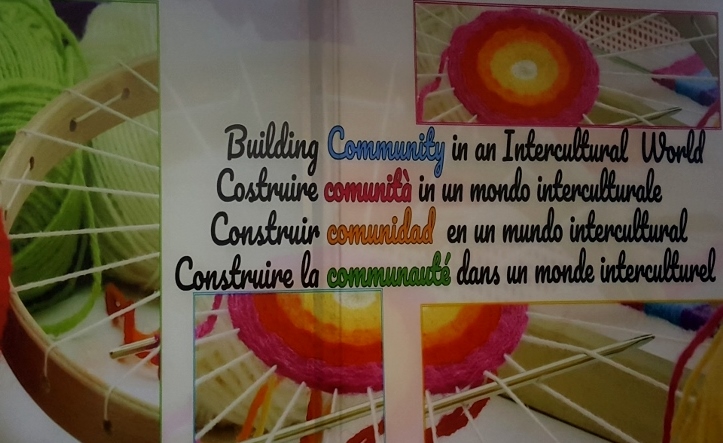 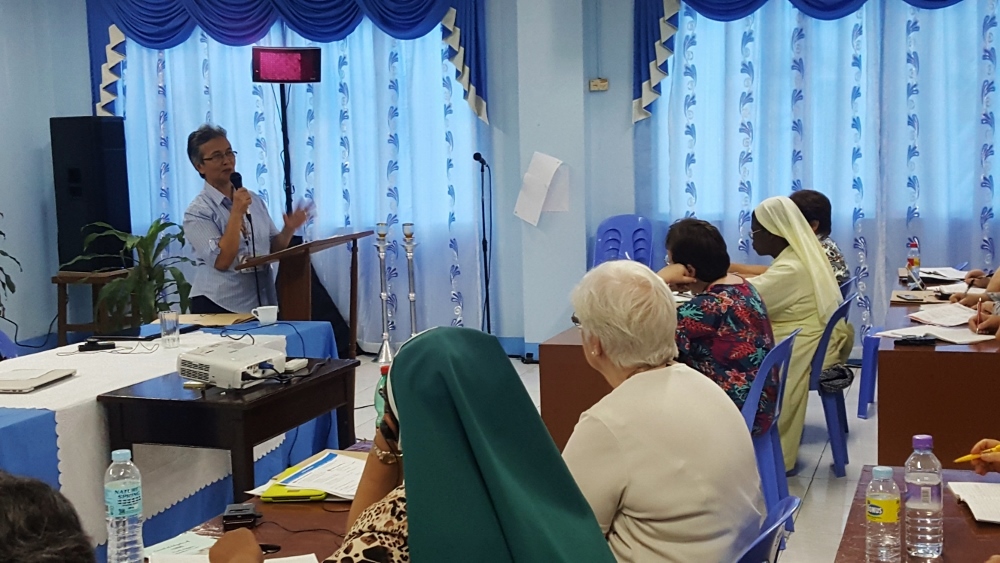 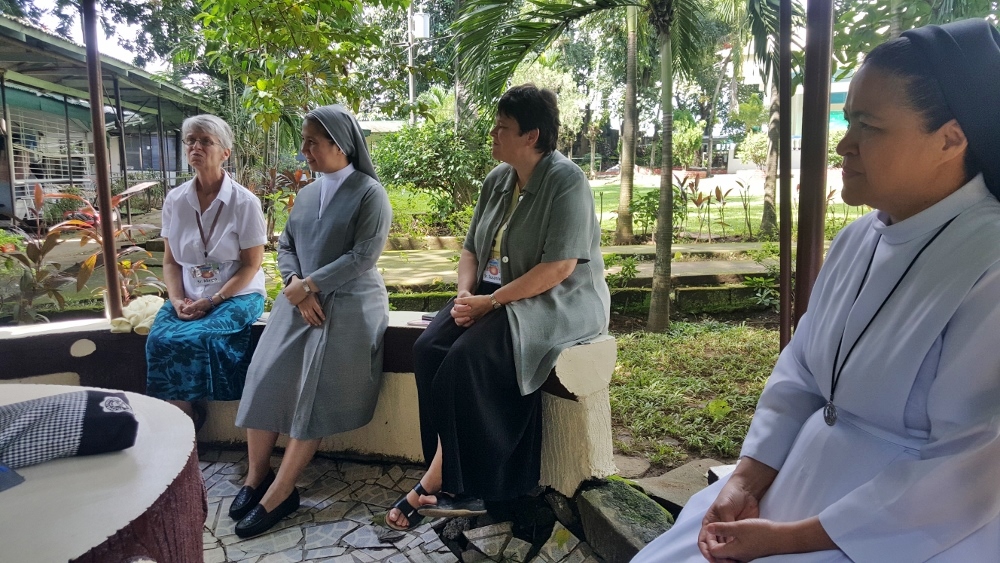 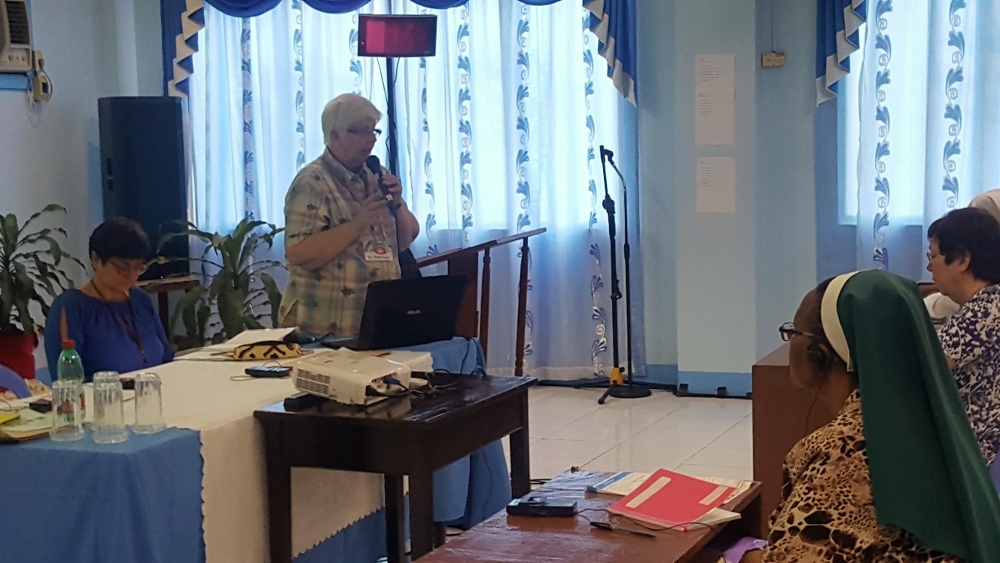 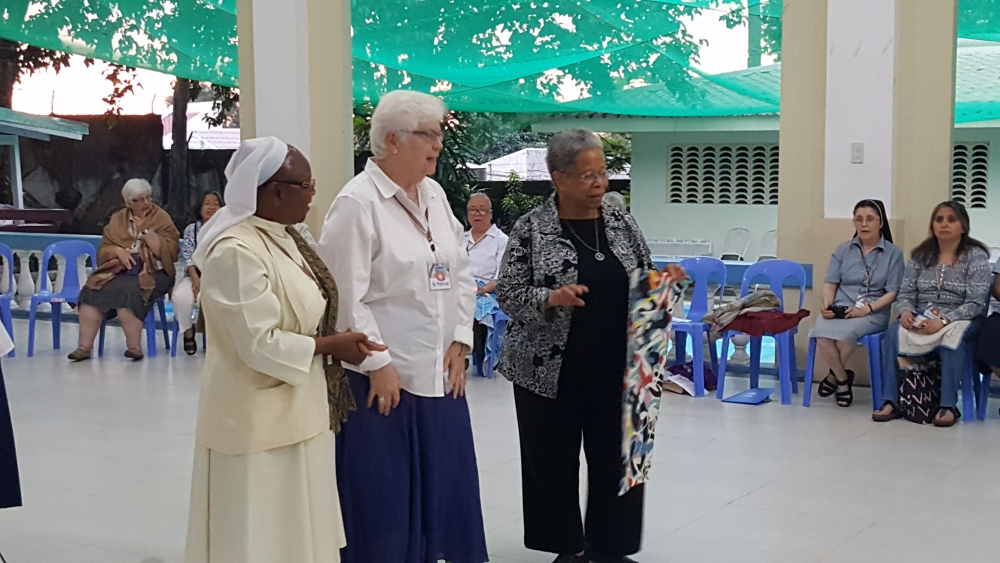 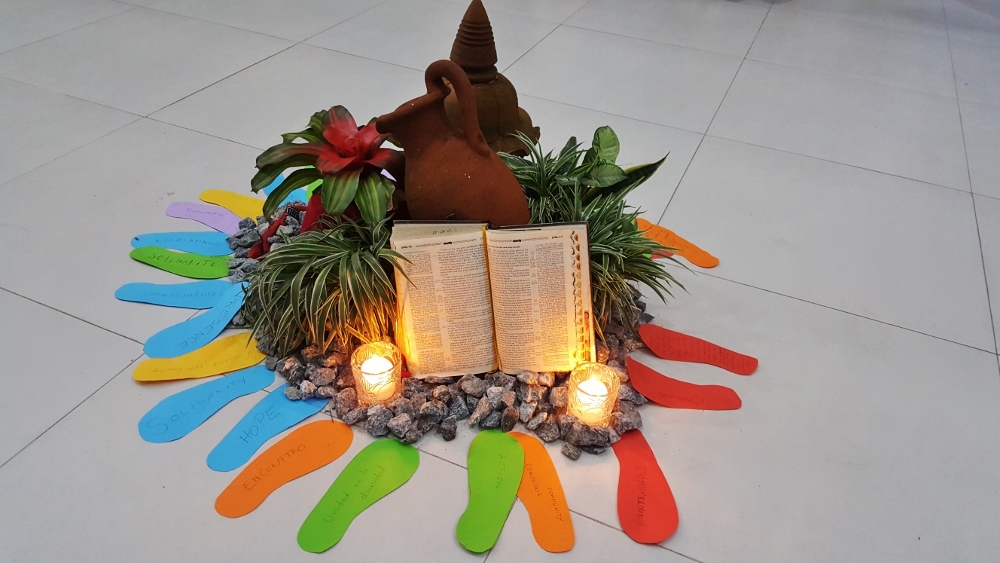