Johnson to LCWR: Sisters ahead of hierarchy in living Vatican II renewal 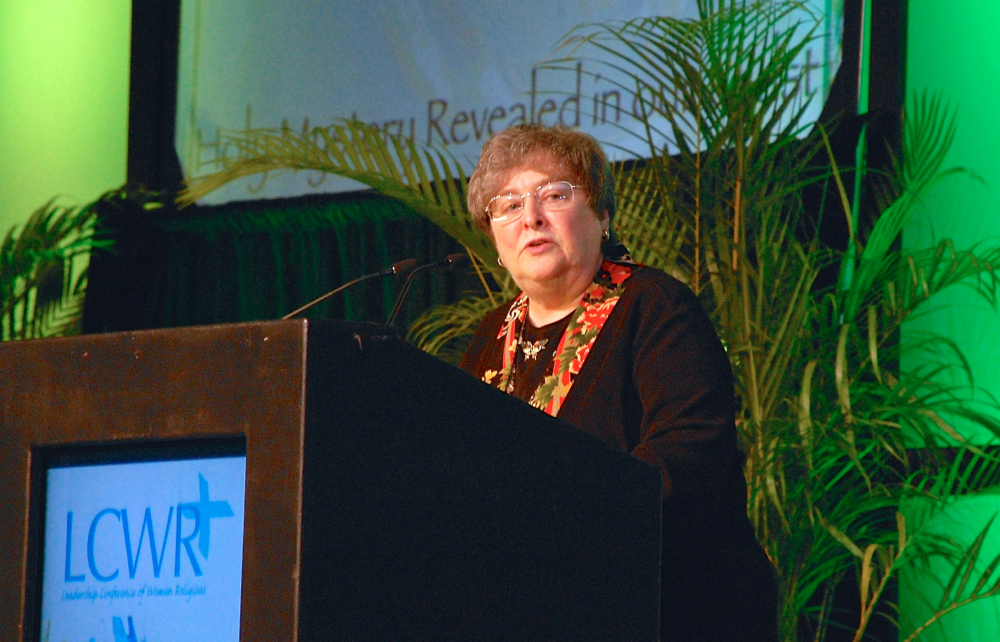 LCWR has posted the text of her speech here.

The Vatican and women religious are caught up in a tension with historical, sociological and ecclesiastical roots, but a solution could be found, Sr. Elizabeth Johnson said.

The Fordham University theologian praised the sisters for their commitment to "meaningful, honest dialogue" and urged them to stay the course.

Johnson was honored Friday with the Outstanding Leadership Award by the Leadership Conference of Women Religious, the largest group of women religious leaders in the nation, representing about 80 percent of the 51,600 sisters in the United States.

Both Johnson and LCWR have been criticized by the church, and Johnson told the nearly 800 sisters gathered here for LCWR’s annual assembly that the criticisms of her writing and of LCWR are intertwined.

Johnson is widely admired by LCWR members, and she urged them to hang on despite an ongoing investigation by the Vatican’s Congregation for the Doctrine of the Faith.

“I think both of us are caught in a situation not of our own making,” she said.

Johnson, a Sister of St. Joseph from Brentwood, N.Y., is considered one of the architects of feminist theology. She has published nine books and more than 100 essays in scholarly journals, book reviews, book chapters and articles; her work has been translated into 13 languages. She holds a doctorate in theology from The Catholic University of America and is a distinguished professor of theology at Fordham.

She is also controversial. In April, Cardinal Gerhard Müller, prefect of the Congregation for the Doctrine of the Faith, ordered that after this assembly, speakers at the group’s events must be approved by Seattle Archbishop J. Peter Sartain, who heads the congregation’s five-year reform agenda for LCWR. Müller cited LCWR’s selection of Johnson for the Outstanding Leadership Award as one reason for the mandate, noting that Johnson has been “criticized by the Bishops of the United States because of the gravity of the doctrinal errors in [her] writings.” Sartain attended each of the public events during the LCWR assembly except for Johnson’s presentation, as he was traveling Friday night.

LCWR communications director Immaculate Heart of Mary Sr. Annmarie Sanders said the assembly directed the board members to respond to the mandate but would not say what that response would be.

“They told the board to take the next steps,” Sanders said.

A statement on the action to be taken is expected sometime after the board finishes meeting Monday.

In 2011, the doctrinal committee of the U.S. Conference of Catholic Bishops said Johnson’s 2007 book, Quest for the Living God, is not in accordance with official Catholic teaching.

Johnson’s selection as a speaker, Müller said in April, “will be seen as a rather open provocation against the Holy See and the Doctrinal Assessment” and further alienates the LCWR from the bishops.

“It was clear from his statement that Cardinal Müller neither read the book or my response, but simply echoed the criticisms of the panel,” Johnson told LCWR members. “But the committee’s assessment of Quest is itself theologically flawed.”

Johnson reiterated her stance that the book does not say the things the panel claims it does and that she does not believe the things they say she wrote.

“It criticizes positions I take that are in accord with the Catechism of the Catholic Church, and in several instances, it reports the opposite of what the book actually says in order to find fault,” she said. “In my judgment, and this is difficult to say, but I do believe such carelessness with the truth is unworthy of the teaching office of bishop.”

Johnson said the doctrinal congregation’s criticisms of LCWR are similar.

“The investigation’s statements express a vague, overall dissatisfaction and distrust on certain topics, and judgments are rendered in such a way that they cannot be addressed,” she said. “But your willingness to stay at the table and offer meaningful, honest dialogue is a powerful witness.”

Johnson said historically, there has always been tensions between religious communities and the hierarchy because one is based on a radical living of the Gospel and the other is based on administration, which requires order.

The issue is also sociological, she said.

“The church did not start out this way, but as an institution, it has evolved a patriarchal structure where authority is executed in a top-down fashion and obedience and loyalty to the system are the greatest of virtues,” Johnson said.

Finally, she said, the tensions are ecclesiastical because women religious have undergone the renewal called for by the Second Vatican Council and the hierarchy has not.

“Certainly, the LCWR and the sisters they lead are far from perfect, but they have got the smell of the sheep on them,” she said to heavy applause. “Post-Vatican II renewal has not taken place at the [Congregation for the Doctrine of the Faith].”

LCWR said Johnson was chosen for her distinguished academic achievements and scholarly contributions and for her consistent focus on those suffering and in need.

“Through her engagement of the most difficult questions of our day and her attention to violations of God’s beloved creation,” the LCWR statement regarding the award said, “she works tirelessly for change in our world that is in accord with Jesus’ vision of the reign of God.”

“She names things so clearly, but at the same time, her commitment to the faith is unquestionable,” Schreck said.

“Her analysis of the difficulties between the hierarchy and where religious communities are was right on, and she did it on so many levels,” she said. “What do you do when you’ve gone ahead and implemented Vatican II and they haven’t?”

Following her speech, Johnson received a long standing ovation, and afterward, dozens of sisters waited in line to speak with her while dozens more waited outside the hall to order audio recordings of the speech.

Johnson closed her talk by sharing an Apartheid-era photo of a wall in South Africa where someone had written “Hang Mandela!” Someone else had come and penciled in “on” to make it “Hang on, Mandela!”, completely changing the meaning of what had been a statement against anti-Apartheid hero Nelson Mandela, who was still in prison at the time.

That creativity, she said, subverted a slur into an inspiration, a curse into a blessing, and that same creativity can be used to change the present situation.

Francis praises US women religious, but is non-specific on sexual abuse