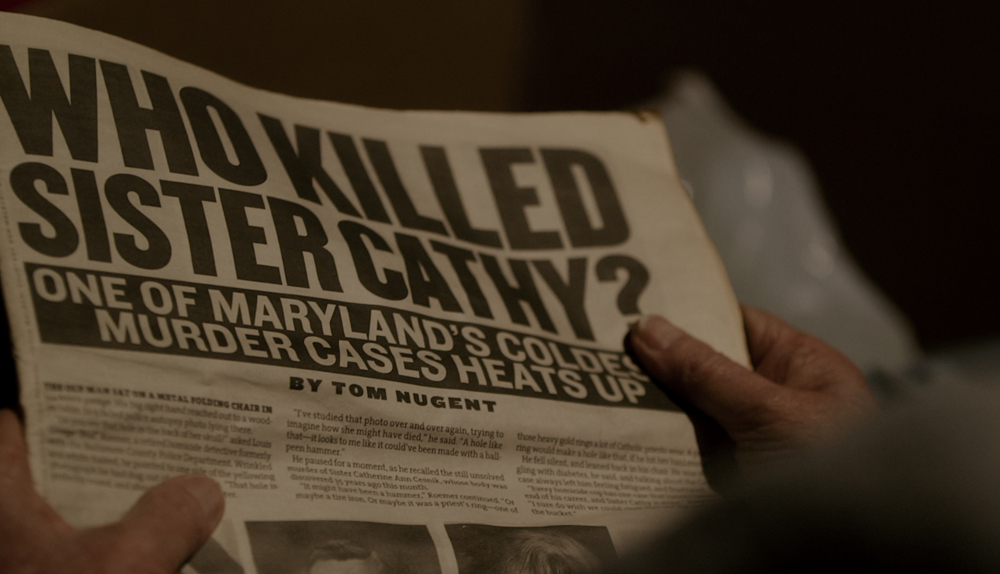 Still from "The Keepers" (Courtesy of Netflix)

Just when you think the clergy abuse phenomenon is over, another story rears its ugly head. This one is brought to us via a seven-part Netflix series called "The Keepers" that will begin streaming on Friday, May 19. It is a tale of the murder of two young women nearly 50 years ago (one a Catholic nun), sex abuse of minors on a devastating scale, and possible cover-ups that could include local law enforcement, the FBI and the Catholic Church.

On the evening of Friday, Nov. 7, 1969, Sr. Catherine Ann "Cathy" Cesnik went out to cash her paycheck, pick up some rolls and buy an engagement gift for her sister. She disappeared. The next day, her car was found parked askew across the street from her apartment, the tires muddy and a twig hanging from the key fob.

The impact of the series is already being felt. There was breaking news the afternoon I was writing this review on May 17. Test results show that the DNA profile of a dead Catholic priest who was a suspect did not match DNA found at the scene where Sister Cathy's body was found, but Baltimore County police authorities say this does not exonerate the seven suspects in the crime.

Sister Cathy was a School Sister of Notre Dame, born in Pittsburgh in 1942 to a devout Catholic family. By 1965, she was a professed sister and teaching English at Archbishop Keough High School in Baltimore (it later merged with Seton High School* and became Seton Keough; it is scheduled to close in a few weeks.)

As part of a post-Vatican II experiment, Sister Cathy and another nun, Sr. Helen "Russell" Phillips, applied for exclaustration, wore secular dress, moved into an apartment and began teaching in a public high school. When the religious congregation reviewed their experiment, the two sisters were told that permission was withdrawn and they had to decide whether to return to the community or leave by the end of the year. Sister Cathy never got to make that decision.

Her body was not found until Jan. 3, 1970, near a dump in Lansdowne, Baltimore. Her head had been bashed in.

Four days after Sister Cathy disappeared, 20-year-old office worker Joyce Helen Malecki went missing. Her body was found Nov. 13, 1969, on the grounds of Fort Meade. She had been strangled and stabbed. The FBI had jurisdiction of the case because the body was found on federal property. Fr. A. Joseph Maskell's name was on a card the clerical staff at the parish sent to her family. 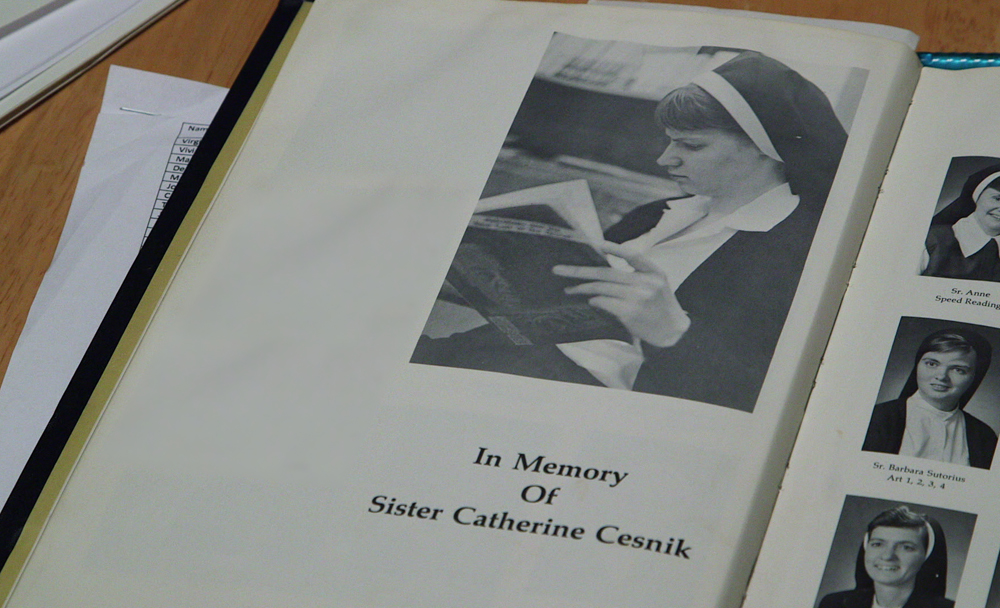 Still from "The Keepers," featuring a photo of Sr. Catherine Cesnik (Courtesy of Netflix)

Five decades later, these murders are still cold cases, though things are heating up thanks to the sleuthing talents of two intrepid former students of Sister Cathy, Abbie Schaub and Gemma Hoskins, and a persevering freelance journalist, Tom Nugent. It is still not known — but highly suspected by Schaub and Hoskins — that the murders are linked.

The crux of the investigation by this group is focused on the supposition that Sister Cathy, remembered as a physically and spiritually beautiful person and approachable by her students, was about to report Maskell and other men for the rape, molestation and psychological abuse of students at the all-girls high school. At the start of the school year in 1975, Maskell was still there but parents complained to the new principal, who fired him immediately. He was reassigned. 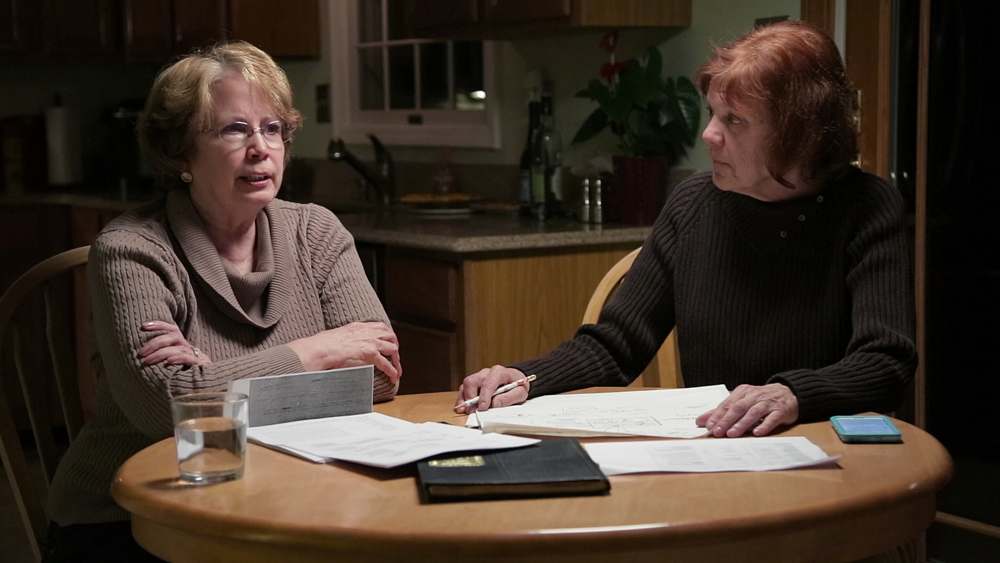 Abbie Schaub and Gemma Hoskins in "The Keepers" (Courtesy of Netflix)

In 1994, two former students, Jane Doe and Jane Roe, filed a civil suit against Maskell, the Archdiocese of Baltimore, then-Archbishop William Keeler, the high school, the School Sisters of Notre Dame, and a gynecologist, Christian Richter, that Maskell had examine the girls. The women sued for crimes committed against them as students. The case was thrown out because the statute of limitations had run out. When the women testified about "recovered memories," experts mocked their testimony. Jane Doe (Jean Wehner), and Jane Roe, (Teresa Lancaster), who did not know each other prior to the lawsuit, figure prominently in the series. Their accounts are sad, devastating and heartbreaking; their courage and strength is beyond heroic.

Authorities in the case questioned Maskell but did not bring charges. The archdiocese instead relieved him of his duties. He fled to Ireland.

"The Keepers" has already had an effect on the search for the identity of Sister Cathy's killer and a change in the statute of limitations for civil cases. At the end of February, Baltimore County exhumed the body of Maskell, who died in 2001, at the age of 62. This indicates that there is DNA evidence to compare as the investigation hopefully continues. On April 4, Maryland's legislature passed HB 0642 that extends the statute of limitations in sexual abuse civil cases.

I reached out to the School Sisters of Notre Dame in Baltimore for their take on the series. Sr. Charmaine Krohe, provincial leader, read me a statement on the phone:

"Sister Cathy was a vibrant and very well-loved sister. Her death is shocking and painful and her spirit lives on. Our hearts go out to the women who had to courage to come forward to talk about their abuse and we need to walk with them and all those who suffer with their pain. We are grateful to the authorities who continue to seek answers about that evening."

Sharon May, an assistant state's attorney for Maryland for many years during investigations into Maskell, is interviewed often in the series but asserts repeatedly and calmly that there was no evidence and no corroboration to bring charges against Maskell while he was alive. You will have to decide if you believe her and the surprising evidence that did emerge that May and her office evaluated.

The Archdiocese of Baltimore does not come off too well in the series, especially in regards to efforts to block the extension for the Maryland civil statute of limitations on sex abuse (there is no criminal statute of limitations) now seemingly resolved with the passage on HB 0642 in April. One of the most fascinating threads in the Netflix series has to do with what the archdiocese knew and when they knew it dating back to the 1960s and Maskell's first years as a priest. The series intimates that the archdiocese influenced police investigations into Sister Cathy's murder; Maskell had a brother who was in law enforcement and the priest was chaplain to both the city and the county police departments. All parties deny these allegations.

In a robust article prompted by "The Keepers," the Archdiocese of Baltimore reaffirms its cooperation in the investigation into Sister Cathy's death and its ongoing efforts to prevent abuse and assist survivors. The archdiocese posted an FAQ page responding to the Netflix series (archdiocesan officials requested to see the series but were not granted access) and a list of articles beginning in 1970 on Sister Cathy's death.

In 2016, the Archdiocese of Baltimore settled with 12 of Maskell's alleged victims.

"The Keepers" is an outstanding criminal-investigation documentary. The victims who participated in the series as well as the filmmakers form the beating heart of the story. The arteries reach out to local, county and federal law enforcement entities and church authorities to reveal information that could solve the mystery of who killed the beloved teacher. The veins of the story are the many intricate connections between people (some who are suspects), places and dates that Hoskins and Schaub have mapped out on a large poster board.

The series is not for sensitive viewers; it is explicit and at times very, very raw. It is also riveting, intelligent and fascinating. "The Keepers" is well documented visually, and integrates interviews and evidence with skill. Director Ryan White credits the high craft of his editing team for the production. Each episode moves the story along with minimal repetition. If you appreciate complicated mystery stories with numerous plot turns and surprises, you might be tempted to binge-watch the series — though I recommend watching just one or two episodes at a time. This way you can process the information and maybe do some of your own research online. There is a huge quantity of information out there. I do wish the series would have presented and explored the statute of limitations issue more thoroughly, and stated it more clearly.

For someone who is supposed to be an objective reviewer it made me weep as I thought of the lost youth, pain and absolute horror so many of the victims experienced at the hands of Maskell and the men he allowed to abuse the students in his office and elsewhere over many years. There are 35 victims for sure, and could be up to 100. Some of these women have taken their own lives. Wehner and Lancaster have done wonderful things with their lives. I stand with the 800-plus women Schaub and Hoskins have gathered for sisterhood, justice and healing on Facebook. I mourn Sister Cathy and Joyce and wonder where their journeys may have led them had they lived.

* This story has been updated with the correct background to Seton Keough High School.

A life of presence, prayer and joy

After elections in the Philippines, life goes on with fear and hope