by Dan Stockman
Religious Life
This article appears in the In Our Own Words feature series. View the full series. 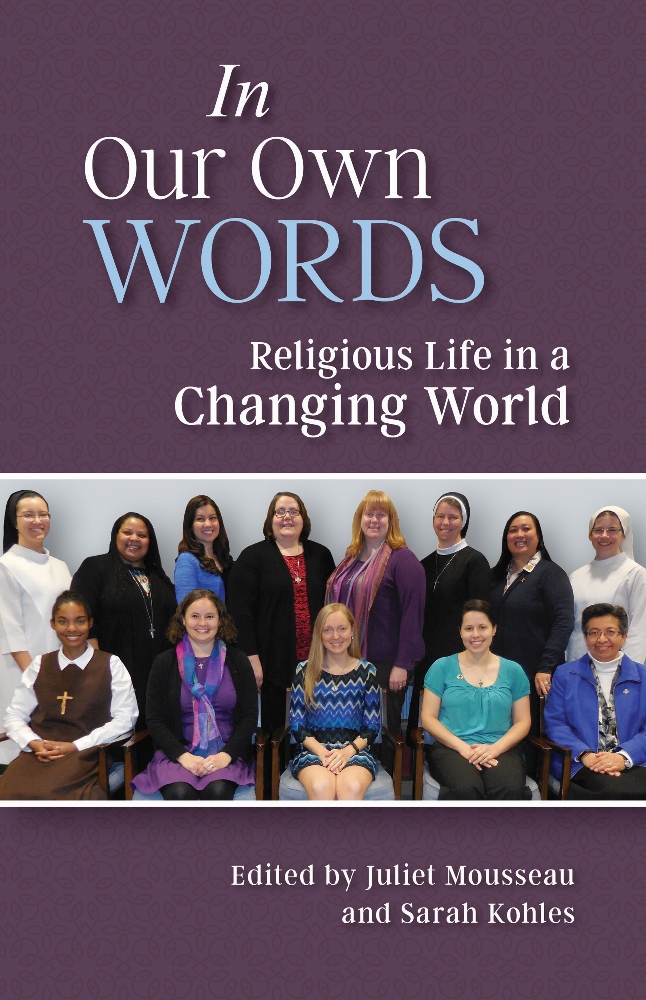 "In Our Own Words: Religious Life in a Changing World," edited by Juliet Mousseau, RSCJ, and Sarah Kohles, OSF, and published by Liturgical Press, 2018

Young women religious who have been making themselves heard through Giving Voice, a peer-led group for sisters under the age of 50, have now put their words into a book reflecting on the hopes, challenges and realities of religious life in current times.

In Our Own Words, published Jan. 25 by Liturgical Press, contains chapters written by 13 younger sisters, including a reflection from Sr. Virginia Herbers of the Apostles of the Sacred Heart of Jesus on diversity and unity in religious life and Incarnate Word Sr. Teresa Maya's thoughts on younger sisters in leadership roles.

Dubuque Franciscan Sr. Sarah Kohles, who edited the book with Society of the Sacred Heart Sr. Juliet Mousseau, said the idea for the project arose from a Giving Voice retreat four years ago for sisters in their 20s and 30s, when several women in early formation asked what books sisters were reading as they prepared for vows.

"We were all reading the same things, and they had all been written 15 years ago," Kohles said. "We realized we aren't reading anything newer because we haven't written it."

Sr. Susan Rose Francois of the Sisters of St. Joseph of Peace said the book will fill a widening gap.

"There's really been nothing out since I was in formation 12 or 13 years ago," Francois said. "I knew we needed this book and that all of us who can write need to write."

Kohles said Mousseau called her, said she felt it was time to start the project, and asked her to help. However, both wanted it to be a collaborative effort.

"We didn't want just 13 people who send in chapters, but all of us to be in dialogue and shape the process the whole way," Kohles said.

The authors took a weeklong writing retreat paid for by the Conrad N. Hilton Foundation, which also funds Global Sisters Report. That not only allowed the sisters to pray and write together, but to edit each other's work and make it stronger, the book's forward notes.

Francois said because of that collaboration, the book feels like a unified whole rather than 13 disparate essays.

"I didn't realize that the process they used, how that would create such a common sense in the book," Francois said. "I feel like I'm in every other chapter, even though I only wrote one. We didn't all know each other until we met at the writing retreat except through phone calls, but we have so much in common by virtue of our calling in life."

Sr. Tracy Kemme of the Sisters of Charity of Cincinnati said younger sisters want the collaboration used to write the book to be a model for religious life, where differences in congregations and leadership conferences don't create division.

"It was just a real feeling of communion and of being one as we worked on this," Kemme said. "That's our future."

Kohles said diversity was key in choosing who to ask to participate.

"We have no two from the same community. I'm Franciscan, and we don't even have other Franciscans. There's charism diversity, ministry diversity, ethnic diversity," she said. "We have four who wear habits as well as those who do not."

"I'm glad we did that," she said. "Virginia [Herbers] addresses communion in her chapter, and it's beautiful."

In the book, Institute of the Blessed Virgin Mary Sr. Christa Parra wrote in Spanglish about her experience as the only Latina in a community of older, white, mostly Irish sisters:

I picked up phrases like "that's lovely," "that's grand," "please God," and, my favorite, "céad míle fáilte," which means a hundred thousand welcomes in Gaelic Irish. I learned to drink leche in my tea and that a good cup of hot tea is the cure for everything! Even in the most open comunidades, this process of cultural bridging is more challenging for the minority than the majority. Everything was nuevo, as I was in constant transition learning about the culture of la vida religiosa and the culture of the Midwest all while being evaluated as a novice. I felt vulnerable most of the time and lonely some of the time, especially when misunderstandings occurred.

Younger sisters often feel vulnerable when they're thrust into leadership roles, Maya wrote in the book. Maya, who is president of LCWR, wrote about misgivings by older sisters about the ability of younger women to take on leadership and about how young women are often reluctant or unwilling to take those roles and are unprepared for them when they do.

"Whether our communities are ready or not, whether younger members are open to leadership or not, the transition of formal authority to the next generation has begun. A new journey in our understanding and appropriation of leadership and, more importantly, of authority has quietly begun despite ourselves and our concerns," Maya wrote. "We are seen by some as undeserving heiresses who will squander what we could not possibly cherish. Worse still, some elders are afraid that we do not love them enough to care for them as they enter the most vulnerable stages of aging. The pain of this lack of trust is acute for us and it requires a special brand of courage."

"It's much less about what the future will hold, and it's much more 13 younger sisters grappling with how to live this life now, what it means to say yes to this, and knowing what we are saying yes to is very different than what previous generations have said yes to," Kohles said. "We're not reinventing religious life, but connecting with our experience of religious life."

Kohles also wrote in the book about what it means to say yes to religious life in an age of diminishment:

Everything about this choice seems to be a reversal of expectations akin to the reversals found in Hannah's prayer [1 Samuel 1:11]. Furthermore, our older wisdom sisters are all going to die, and there will not be very many of us left. Some of us have even joined communities in which we have no peers at all. Who signs up for such a life? How can this be life-giving? It makes no sense by any worldly measure. Yet, for us intrepid few, we know this is where we belong. It is somehow in the midst of these impossible situations that God will gift us with life.

Francois also wrote about the precipice young sisters have stepped upon in the book.

"Our task is not to figure it all out and single-handedly ensure the future of our charism, mission, community, or religious life itself. That lies in the heart and mind of God," Francois wrote. "The central question that the present generations of religious life are called to live into together is this: what are we supposed to do now, during this time of fog, for the sake of our present and future as community for mission? I ask myself this question often."

Editor's note: Global Sisters Report will be publishing excerpts from In Our Own Words during the week of Feb. 12.

In Our Own Words: Charism of religious life today is both local and global

In Our Own Words: Charism of religious life today is both local and global