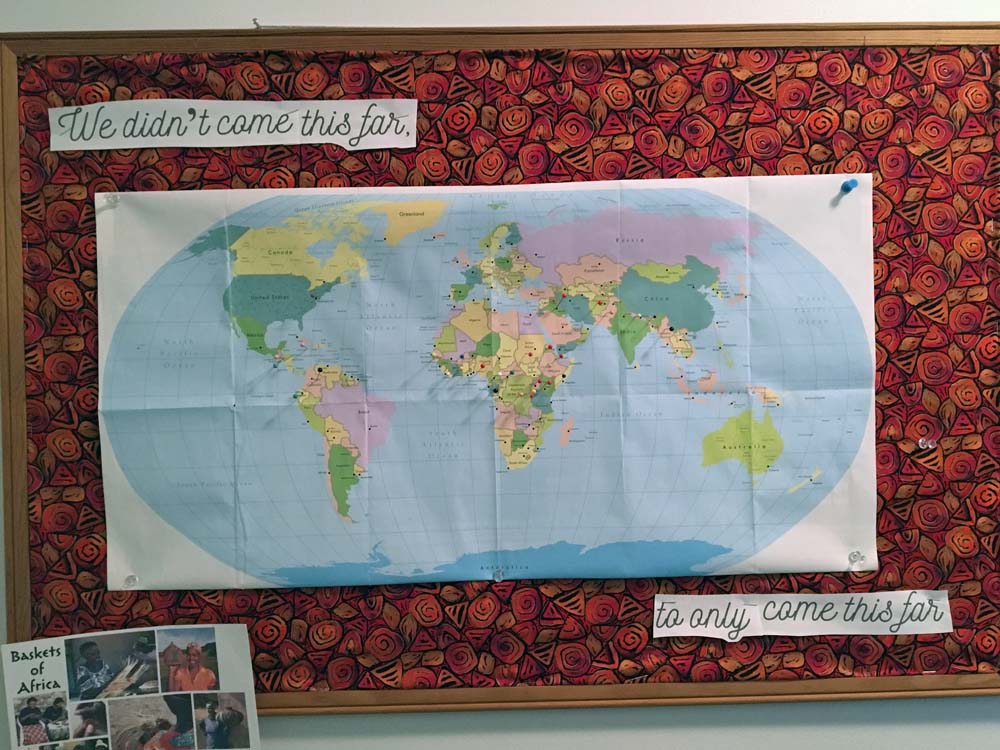 A map with pins showing the many countries Asylee Women Enterprise women come from. It reads, "We didn't come this far to only come this far."

Refugees are sent to a host country after extensive, multi-year vetting by the United Nations High Commissioner for Refugees, also known as UNHCR, that begins once they've left their homes and registered as refugees. Those who do not register cannot be resettled. UNHCR determines which country to refer refugees to; the refugees do not get to choose. Those assigned to the United States undergo significant additional vetting by multiple U.S. federal agencies before being accepted.

Once in the U.S., refugees receive official resettlement services from the U.S. Department of State for 90 days, including assistance finding housing, signing up for English language classes, obtaining Social Security cards, and registering children for school. According to one official resettlement agency, refugees are given a cash allowance of $925 per person spread over the 90 days. After this initial period, refugees may be eligible for additional time-limited services (such as cash and medical assistance) through the Office of Refugee Resettlement, which is part of the U.S. Department of Health and Human Services. Refugees must repay the U.S. government for all travel costs to the United States.

Currently, there are nearly 22.5 million people around the world who have registered with the U.N. as refugees; 43 million others are considered forcibly displaced but have not registered as refugees. In 2016, only 189,300 registered refugees were ultimately resettled, which is less than 1 percent of the 22.5 million refugees who are registered today. By law, the president, working with Congress, determines the number of refugees the U.S. accepts each year. The U.S. accepted 84,994 refugees for fiscal year 2016. Former President Obama's administration raised the fiscal year 2017 refugee ceiling to 110,000. President Donald Trump reduced that number to 50,000 after he took office in January 2017. According to the Migration Policy Institute, more than 42,000 refugees have already been admitted this fiscal year.

Asylum-seekers do not come through the U.N. refugee process and must already be in the United States when they request asylum. They must do so within one year of arriving, regardless of how they arrived and what their immigration status is. The largest percentage of asylum-seekers in the U.S. is from China (34 percent), followed by Egypt (12 percent), according to a 2016 fact sheet from American Immigration Council.

Asylum-seekers must show that they have been persecuted or fear persecution because of race, religion, nationality, membership in a particular social group, or political opinion. Once granted asylum, recipients may work in the United States and apply for a Social Security card. They may also, at that time, be eligible for financial and medical assistance, employment preparation and job placement, and English language training. Unlike refugees, they do not otherwise receive any government assistance.

According to the American Immigration Council, in 2016 there were more than 620,000 asylum cases pending. More than 22,000 asylum cases were decided in fiscal year 2016. The Trump administration has been tightening the rules under which asylum is granted, and the process of gaining asylum can take years.

Priests criticize head of doctrinal congregation for rebuke of LCWR