The leaders of the world's communities of Catholic women religious were warned against accepting an "entitlement creep" that numbs them from confronting poverty and environmental destruction at the opening session of a triennial gathering here.

While Zinn said such education is important, she said it also "numbs our minds and blinds our heart."

The gifts that women religious receive, she said, "can create a numbness of consciences and a blindness of heart through which we can easily see not the pain, but see what we want to see."

Zinn, a former president of the Leadership Conference of Women Religious and the former representative for the Congregations of St. Joseph at the United Nations, spoke Monday, May 9, at the opening of the 20th such assembly of UISG members, which will be held through Friday, May 13, on the theme "weaving global solidarity for life."

Over five days of plenary sessions and meetings, including a scheduled private audience with Pope Francis on Thursday, May 12, the community leaders will tackle questions of the role of religious life in the world in the light of current global issues, particularly the continuing economic and environmental crises.

Zinn focused much of her remarks on spurring action to fight global climate change and degradation of the environment. She called on the women to undertake a conversion of mindset, heart and will to become "weavers of solidarity for the planet."

The St. Joseph sister told the story of a young girl who was late coming home because she stopped to cry with another girl who had broken a favorite toy, adding that the story "captures the core of our vocation."

"How can we be present enough to the reality of our Earth today so that our hearts are broken?" Zinn asked. "It's so easy for us to avoid the reality . . . because the reality oftentimes stands before us, and we do not see it for what it is, and so we are unable to respond to it."

"I think the world is asking all of us women religious: Are you in there?" Zinn said. "Are you behind your eyes? Are you really seeing the Earth's reality?"

"The entire world, the entire planet, every species on the planet needs you right now," said the St. Joseph sister, who laced her remarks with quotations from Francis' recent environmental encyclical, Laudato Si'.

Women from five continents are taking part in the UISG meeting this week, and the discussions will be translated into 11 languages, including Japanese, Korean, Vietnamese and Chinese.

The meeting is to involve only one or two formal presentations each day, allowing the women religious periods of time to reflect on the presented topics in their table groups.

Maltese Sr. Carmen Sammut, UISG president and the general superior of the Missionary Sisters of Our Lady of Africa, opened the gathering Monday by saying the group chose the theme it did because many have familiarity with the "beautiful, complex, patient, creative, skillful work" of weaving.

"The commitment to global solidarity is also a most beautiful and complex enterprise which needs patience, solidarity and skill," Sammut said. "And like all weaving, it starts with one stitch and goes on."

She said the meeting would be an opportunity for the leaders to come to know one another and how religious life is lived in their various contexts.

"It is a grace-filled time when the weaving can be advanced so that when we are far from each other, our network can become more efficient," Sammut said. "Let us weave dreams that awaken what is truest in us."

Murray said so much work had been undertaken that it could be considered a "refounding" of the group, which was first instituted at the end of the Second Vatican Council in 1965.

One particular initiative mentioned was the creation of a five-member Council of Canon Lawyers. The members, prominent canon lawyers who are women religious from five continents, are now advising the UISG on canonical matters and will also offer advice to women's congregations around the world.

To give the group meeting in Rome an image of the type of organization UISG leaders want to build, Sammut showed a photo of an iconic painting of the Trinity done by Russian medieval painter Andrei Rublev.

The painting shows the parts of the Trinity as different individuals sitting at a table together. But each holds a walking stick, showing they are ready to move as needed.

The international women's group, Sammut said, is like the painting — different congregations from around the world remaining separate but "ready to move on together, wherever the Spirit calls us." 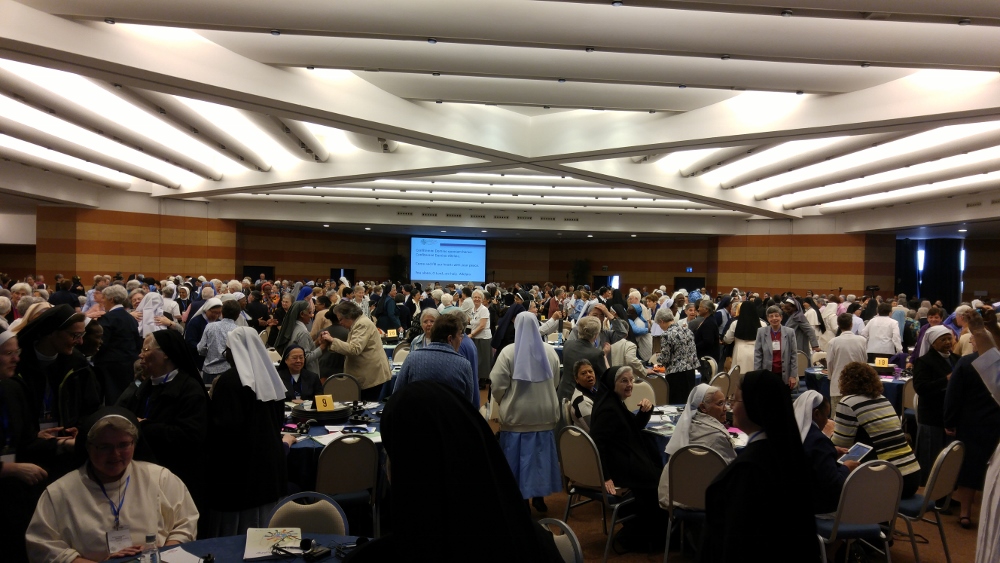