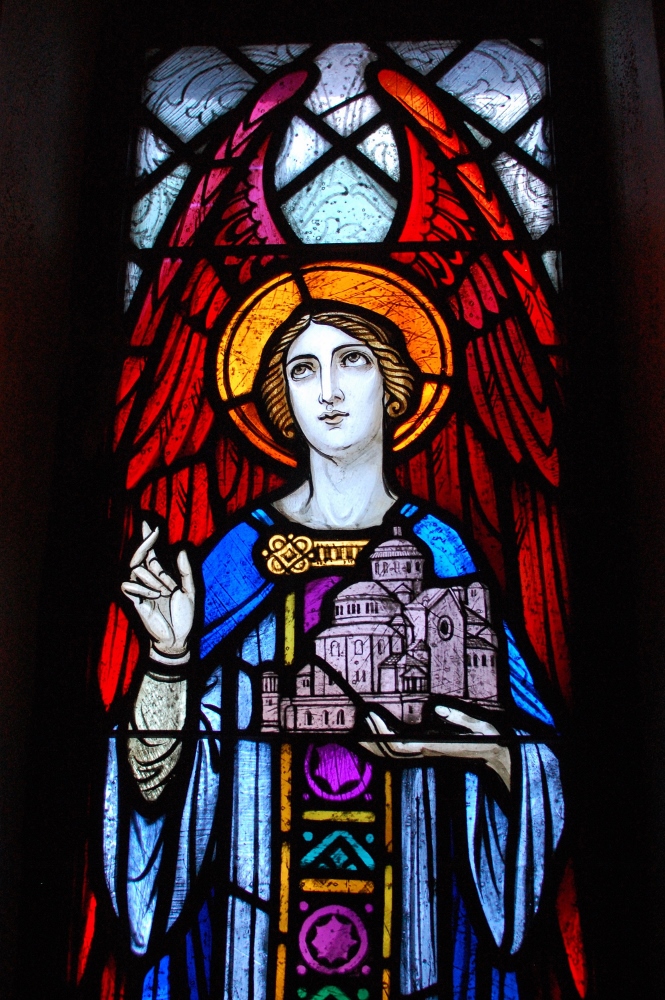 The stained-glass window in the church at the Immaculate Conception Monastery in Ferdinand, Indiana, is known as "the monastery angel" because she holds the monastery in her hand. (GSR photo / Dan Stockman)

Ferdinand, Indiana — The Immaculate Conception Monastery, a grand convent that crowns the rolling landscape for miles, is home to about 150 Sisters of St. Benedict. It's also home to four sisters.

To clarify: That's sisters who are also sisters to each other. As in siblings.

Their blood relation may be interesting — especially to outsiders — but what matters, they say, is that they are where God wants them to be.

"You can always have the best-laid plans," Rosemary said, "but that's not always how they work out."

In this area of southern Indiana, the monastery is hard to avoid. It sits on a hill overlooking the town and can be seen miles away. In addition to the convent, once home to nearly 500 women religious, there was a Catholic college and a Catholic girls' high school, all run by the Sisters of St. Benedict. The college closed in 1970, and the girls' academy closed in 2000. 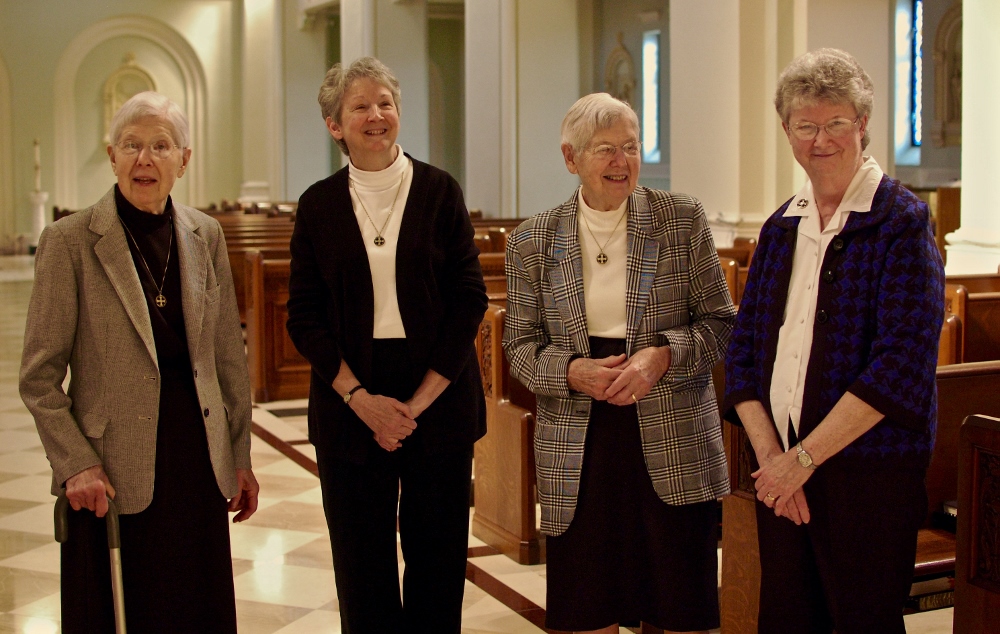 From left: Benedictine Srs. Mary Carmel Spayd, Rosemary Dauby, Mary Carmen Spayd and Agnes Marie Dauby talk about what it's like to have a sister at the same convent, the Immaculate Conception Monastery in Ferdinand, Indiana. (GSR photo / Dan Stockman) 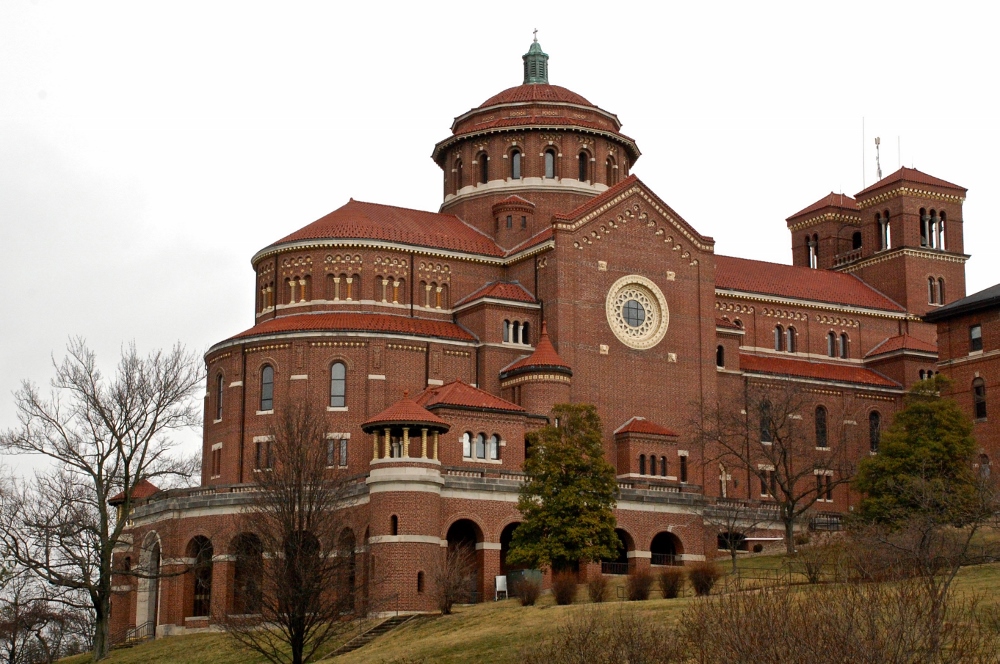 The outside of the church at the Immaculate Conception Monastery in Ferdinand, Indiana. (GSR photo / Dan Stockman)

Agnes, 65, Rosemary, 64, and two of their three other sisters attended the high school, and one of their older sisters was a Sister of St. Benedict for 17 years before leaving the order in 1982. They also had two aunts — blood siblings, as well — who were sisters there. That's five women from the same family.

"When Rosy entered, our brother said, 'One is OK, maybe two. But not three!'" Agnes said.

Kathleen Sprows Cummings, director of the Cushwa Center for the Study of American Catholicism at the University of Notre Dame, said there was a time, especially during the first half of the 1900s, when multiple siblings entering the same order was not unusual.

"It was much more common in the past, though there are no statistics at all to back that up," Cummings said. "Usually, the common path was that they were taught by nuns, and often an older sister would join, making it seem that much more viable for the younger ones." 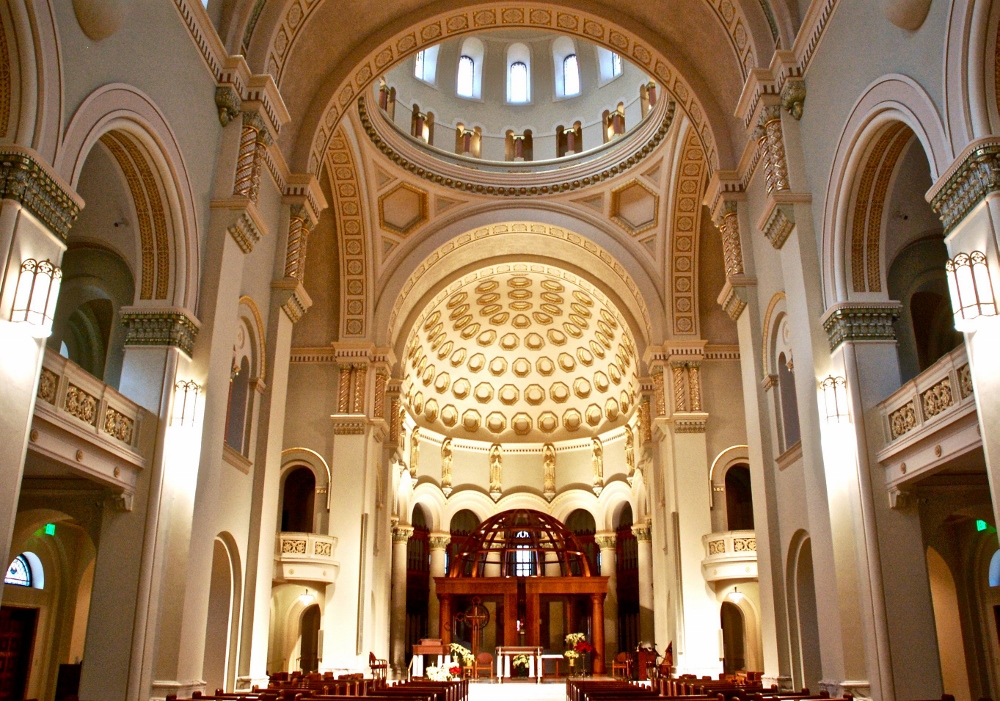 At that time, the career choices for many women were limited, and while some siblings would join different orders, it was much more likely they would join the one their family was already familiar with.

In the area around Ferdinand, the obvious choice was the Benedictines. In larger cities, Cummings said, there were often many congregations to choose from, but young women were more likely to choose the order that taught them in school.

'It just became a love affair'

Mary Carmen and Mary Carmel, both 90, grew up just 7 miles from the Immaculate Conception monastery. Mary Carmen said the Benedictines were the only sisters they ever knew.

"I was impressed by their kindness, and they were great teachers," she said. "Attending the academy on this hill, I became more acquainted with the sisters, and it just became a love affair."

Mary Carmen said becoming a sister was never really talked about, but from grade school on, both girls wanted to become sisters.

"Our mother encouraged it," she said. "She had always wanted to join, but her mother wouldn't let her until she was 21, and by then, she said, 'Forget it.'"

Outside the family, however, no one believed the two would become nuns. 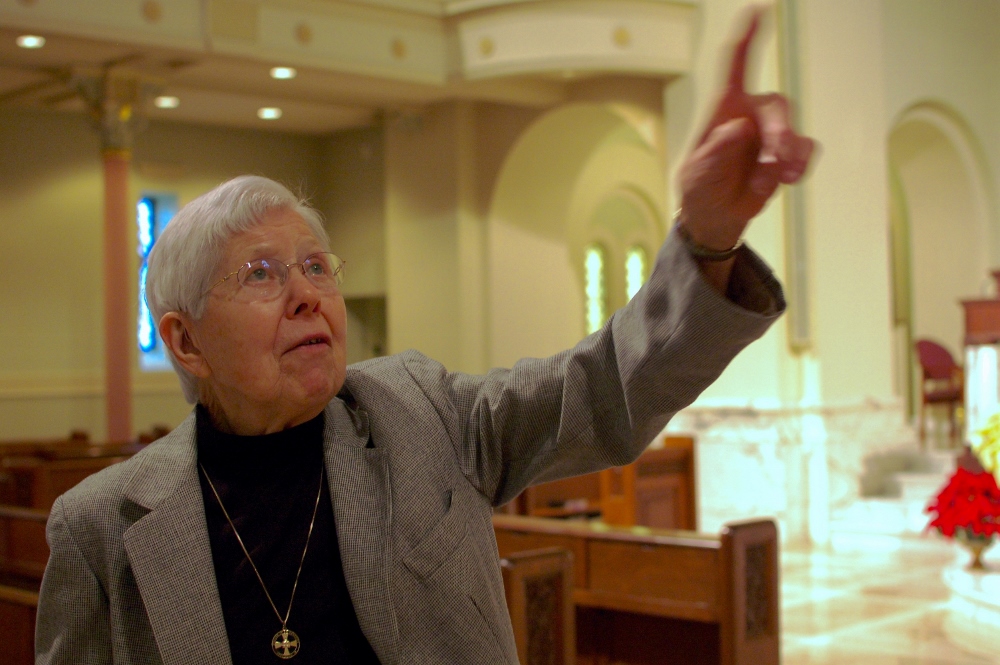 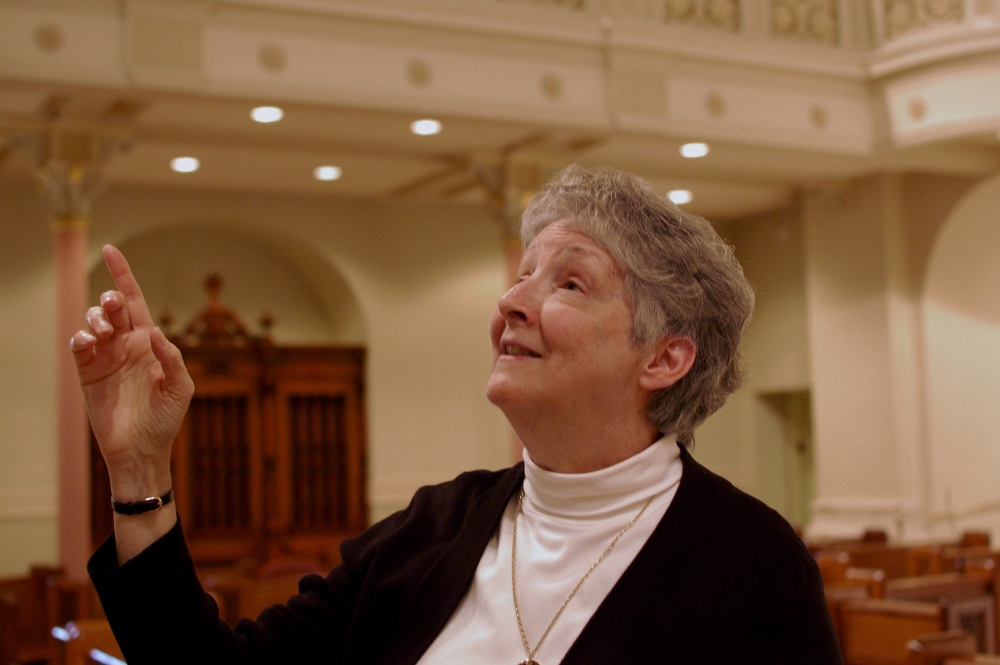 "We were tomboys," Mary Carmen said.

After graduating from the academy, the twins went to work in the offices of Republic Aviation in nearby Evansville, which built P-42 Hellfire fighter planes for World War II.

After a few months, Mary Carmel told her sister she thought they should go to Mass at the convent, and Mary Carmen agreed. From that day on, their paths were set. They formally entered the convent in 1944.

And, unlike today, it was indeed a loss — women religious were not allowed to visit home, and when they did, the visits were short.

"We were here five years before we got to go home," Mary Carmel said. "And when we did go home, it was like leaving all over again. It was very painful. We had to be back by 8 at night, so we hardly had time to see anyone."

And there was another love they had to leave behind.

"We loved to dance. It was the hardest thing to give up," Mary Carmel said. 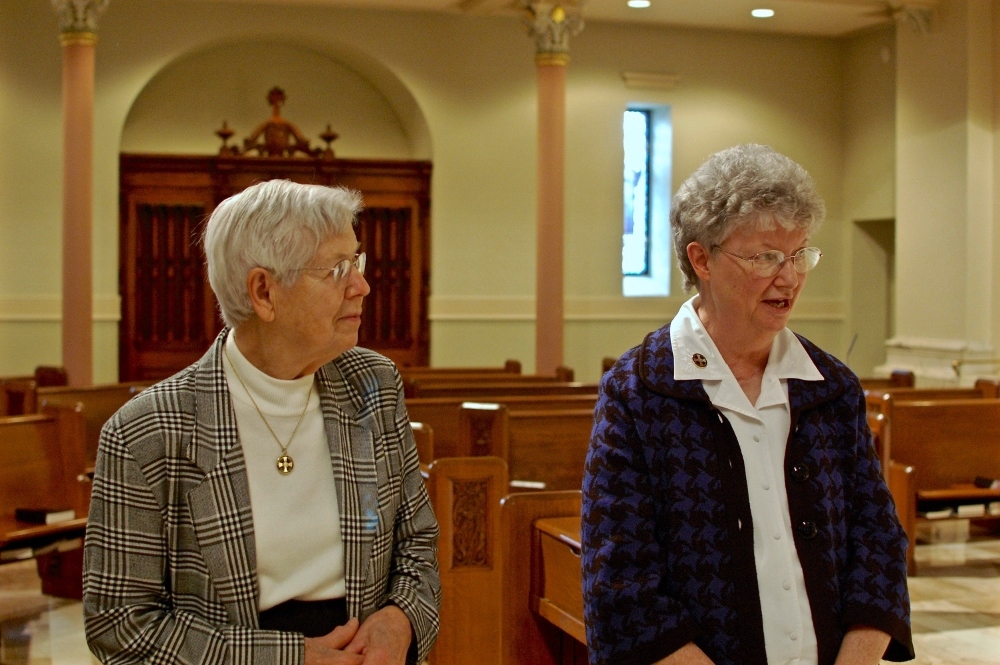 Benedictine Srs. Mary Carmen Spayd and Agnes Marie Dauby talk about what it's like to have a sister at the same convent. (GSR photo / Dan Stockman)

While still in high school, the two would take the bus to Camp Breckinridge near Evansville to go to the dances held for the soldiers training there.

"They had these wonderful bands," Mary Carmen said. "Tommy Dorsey and all the others. We just danced our lives away."

They almost danced their vocations away. It was very common for girls at the academy to enter the congregation after their junior year, Mary Carmen said. "Well, the twins did not do that. The sisters were very concerned."

They were so concerned that at one point, the twins were sent a letter implying that they viewed going dancing as much more important than their future.

When they lived in Evansville and worked at Republic Aviation, they would sometimes skip meals to be able to afford to go dancing. And when they were candidates in the monastery, they would sit in chapel and could hear a dance being held in the makeshift gym below.

"My foot would be tapping in time to the music," Mary Carmen said. "I was dying to go down there."

"I think I was in tears sometimes," Mary Carmel said.

Now they say they're "too old" to dance — but their eyes still light up talking about doing the Charleston and the jitterbug.

'God was telling me — I just didn't want to listen'

Agnes and Rosemary also found their way to the convent through the girls' academy.

"I went to a retreat and remember the director said it was important to pray to know what your vocation is," Agnes said. "So I made a deal with God. I said, 'If you help me know what to do by my senior year, I'll go to Mass every Saturday morning.' Saturday was the only day we didn't have to go, so that was a real commitment for me."

But by her senior year, she had decided not to join religious life and was accepted at a college in Louisville, Kentucky, to study social work. 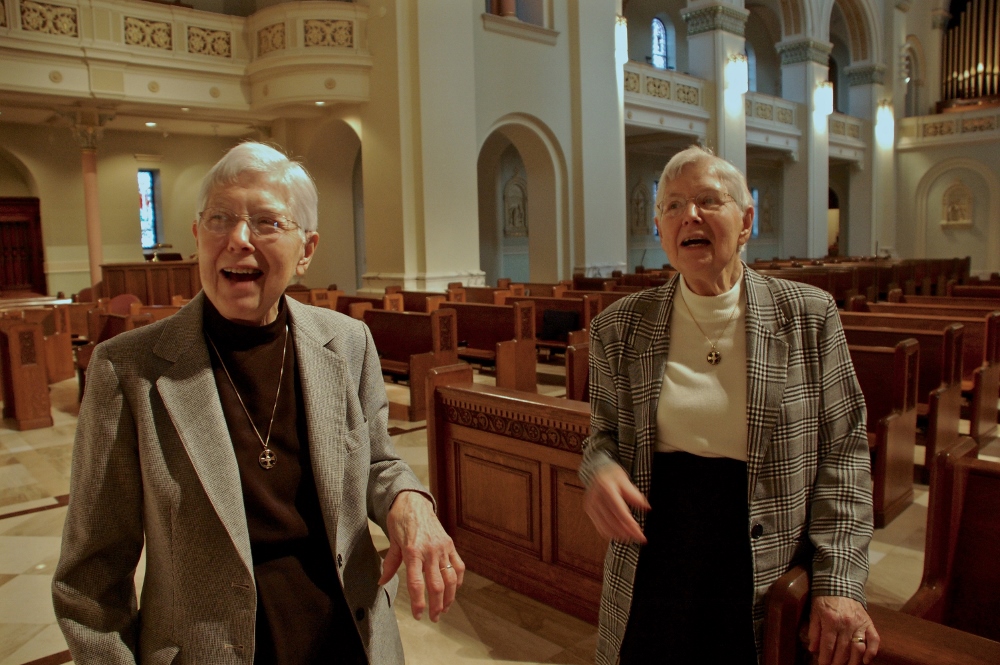 "Sisters would ask me if I ever thought about it. And people would say I had leadership qualities and had I ever thought about being a sister," Agnes said. "I remember trying to forget all about that. I didn't want anything to do with it. I went to a dance and a girl I knew from a Come and See weekend said, 'Are you going, or what?' I couldn't get away from it!

Then her older sister, who was already in the convent, asked her if she had thought about joining.

"I wrote her an 11-page letter saying, 'I wish people would stop asking me,'" Agnes said. "I went on and on about it."

Finally, on Feb. 9, 1968, midway through her senior year at the academy, Agnes met with the mother superior to talk about the possibility. After working as a carhop at the A&W root beer stand over the summer, she entered the congregation in August.

Agnes' younger sister, Rosemary, took a different path: She wanted to join, but didn't want anyone to know about it. Whenever people asked her if she had thought about religious life, she said no.

"If I was going to join, I wanted it to be because I wanted to, not because my sisters were here," Rosemary said. "When they had a Come and See weekend, I didn't go. The girls all came back and said how much fun it was, and I said, 'Nuh-uh!'"

Usually, when girls met with the mother superior to talk about joining, they were given a St. Benedict medal to wear, signifying that they were going to enter religious life. Rosemary met with her in secret and didn't get the medal. She told no one until graduation day, and entered in 1970.

The twins have been Benedictines for nearly 72 years and tell stories about teaching in the same school, where students could not tell them apart. At one point, their classrooms were next to each other; Mary Carmen taught junior boys and Mary Carmel taught senior boys.

"Students would say, 'This is not fair,'" Mary Carmel said, laughing. "One boy never figured out which one of us he had."

"Some of the boys called us Sisters X and Y," Mary Carmen added.

The twins can also tell you about all the physical labor they've done around the grounds, including mixing and pouring concrete and placing stones for a walkway. Giving a tour of the magnificent church at the monastery, they point to the dome that towers above the sanctuary and ask Agnes and Rosemary if they've ever been up to the dome. 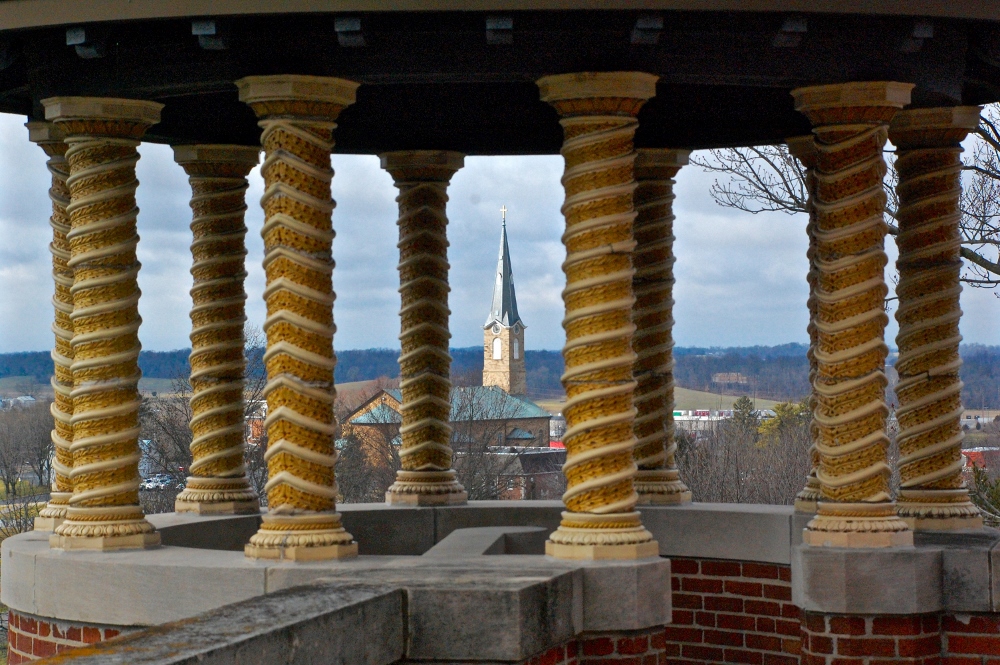 The Immaculate Conception Monastery looks out over the town of Ferdinand, Indiana. (GSR photo / Dan Stockman) 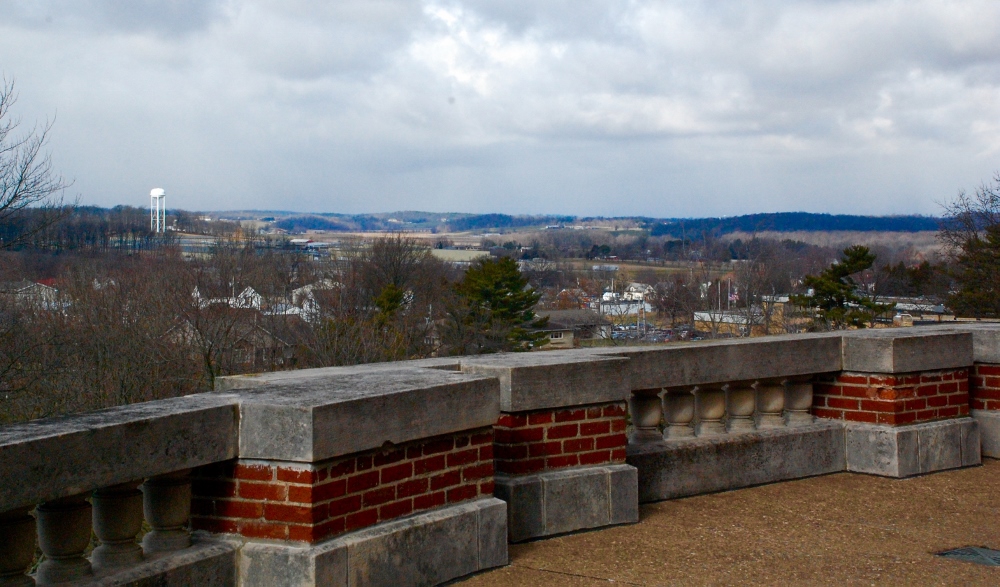 The view from the church at the Immaculate Conception Monastery in Ferdinand, Indiana. (GSR photo / Dan Stockman)

"We have!" Mary Carmen says.

And then they tell how, when the church was undergoing restoration in the early 2000s, the outside was covered with scaffolding. So the two of them climbed to the top so they could see what the countryside looked like from atop the dome, which sits at least seven stories above the top of the hill. They would have been about 78 at the time.

"This is home," Mary Carmel says. "But I never cease to be amazed. Sometimes I stand on the colonnade and just marvel. It could never be replaced."

Q & A with Sr. Marie-Paul Ross, providing an education on sexuality

An elder reflects on the transformation of religious life