Skip to main content
This story appears in the NCSW 2018 feature series. View the full series.

A team of eight women religious representing four communities took on a pub full of young adults for bragging rights, beer and "prayerful pretzels" at a March 13 trivia night in Arlington, Virginia.

While the sisters didn't win first prize — their team, Nun Better, came in fifth — they certainly won the evening, charming those in attendance at Ireland's Four Courts Irish Pub and even appearing on the local news later that night.

"Are you Smarter than the Sisters?" trivia night was part of an effort to reach out to more young Catholics while also promoting awareness of SOAR, Support Our Aging Religious, a nonprofit that raises funds for retired religious men and women and their practical, immediate health care needs relating to accessibility. It was one of many events held during the fifth annual National Catholic Sisters Week, March 8-14, funded by the Conrad N. Hilton Foundation, which also funds Global Sisters Report.

"We're shocked! We're thrilled!" at the turnout of about 100 people, said Sr. Kathleen Lunsmann of the Sisters, Servants of the Immaculate Heart of Mary in Scranton, Pennsylvania, before the trivia contest got underway.

The sisters had staked out a table early, meeting for dinner, prayer, and to strategize, said Lunsmann, president of SOAR. Most of them hadn't met each other before, but Lunsmann knew they were the right women for the job.

"I invited smart sisters to be on our team," she said.

"We just hoped we would have a second team playing," she said, gesturing around with amazement at the filled-to-capacity room.

Over five rounds of trivia, the sisters battled it out with 10 other teams of players. Each round included a bonus question about Catholic sisters; a drink special in their honor — the fuzzy papal, a renamed fuzzy navel with peach schnapps and orange juice — was on the menu.

She was one of the emcees reading out questions and joking with the crowd, warning them not to cheat by checking their smartphones lest they be "cast out into the outer darkness, where there will be wailing and gnashing of teeth."

The sisters, who all belong to congregations that receive financial support from SOAR, mingled with the crowd before and after the contest.

"Any opportunity we have to expose people to our work" is a good thing, said Lunsmann, whose background is development and fundraising. "These sisters have their game face on, and they are ready to go!"

Burley, who drove about 35 miles to participate, agreed that pub trivia was an excellent way to show religious sisters in a different light to young laypeople.

"It's just lighthearted fun. It's a chance for people to see us outside our traditional role, just having fun," she said. "And to show that we're still around. Some people think there aren't many of us anymore."

As director of mission integration and communication for her Benedictine monastic community, Burley said she and her sisters engage with young people through a high school they sponsor in Richmond and a primary school on their property.

This summer, through the Ora et Labora program, the community will host five girls from the high school, St. Gertrude, for a week.

"They'll have the chance to experience monastic life and what we do and how we minister to God's people," Burley said.

Three friends with ties to the Bishop O'Connell High School community in Arlington formed a team for the trivia night when they heard about the fundraiser through their Catholic circles. The school has an IHM presence.

"We were mediocre," said Meg O'Donnell, who admitted with a laugh to considering a vocation as a girl after seeing "The Sound of Music." She has supported SOAR in the past.

"I went to Catholic school, and I'm Irish," Patti Wilson said. "The whole thing spoke to me."

SOAR has benefited in the last year from a relationship with Notre Dame Impact Partners, a project of the university's Mendoza College of Business that provides grants and resources to Catholic nonprofits to help them with strategic problems. Seven alumni volunteers spent four months working with SOAR doing research on parishes and the community to help them engage more young people under the age of 40, educating them about religious life, gaining financial support, and perhaps even helping them explore a vocation.

Since then, SOAR has sponsored an Oktoberfest happy hour for young adults and a Christmas Jingle and Mingle night in their neighborhood in Northeast Washington, D.C., which is home to the U.S. Conference of Catholic Bishops and a number of Catholic congregations.

The jinglers started out as minglers at a local watering hole, then caroled their way to the home of the Little Sisters of the Poor, where the sisters joined in the holiday cheer.

Judging from the response of the crowd at the trivia night this week, the good cheer continues.

"I think it went very well," said Paul Wilson, SOAR's donor database coordinator. "It was good to see so many people so engaged. Who knows what seeds will develop? All you can do is plant the seed."

SOAR, which is based in Washington, D.C., was founded in 1986 to help alleviate the retirement crisis facing elderly religious men and women in the United States. The group raises funds to respond to the immediate needs of retired religious, awarding grants for things like whirlpool tubs for hydrotherapy, HVAC units, broken sidewalk repairs, stair cars, and automatic door-openers so that a sister using a wheelchair no longer needs another sister to accompany her throughout the building to open doors for her.

SOAR and the retirement fund have a close working relationship. There are currently about 62,700 Catholic sisters, brothers and religious order priests in the country. About 44,800 live in religious communities that have received financial assistance, support or services from the retirement fund.

Lunsmann said the trivia night was such a success that they're hoping to do another one this summer. Next time, she said they might break up the sister team and instead assign a sister to each team that participates.

"Our goal to bring together sisters from all different congregations and show the variety of religious life," she said. 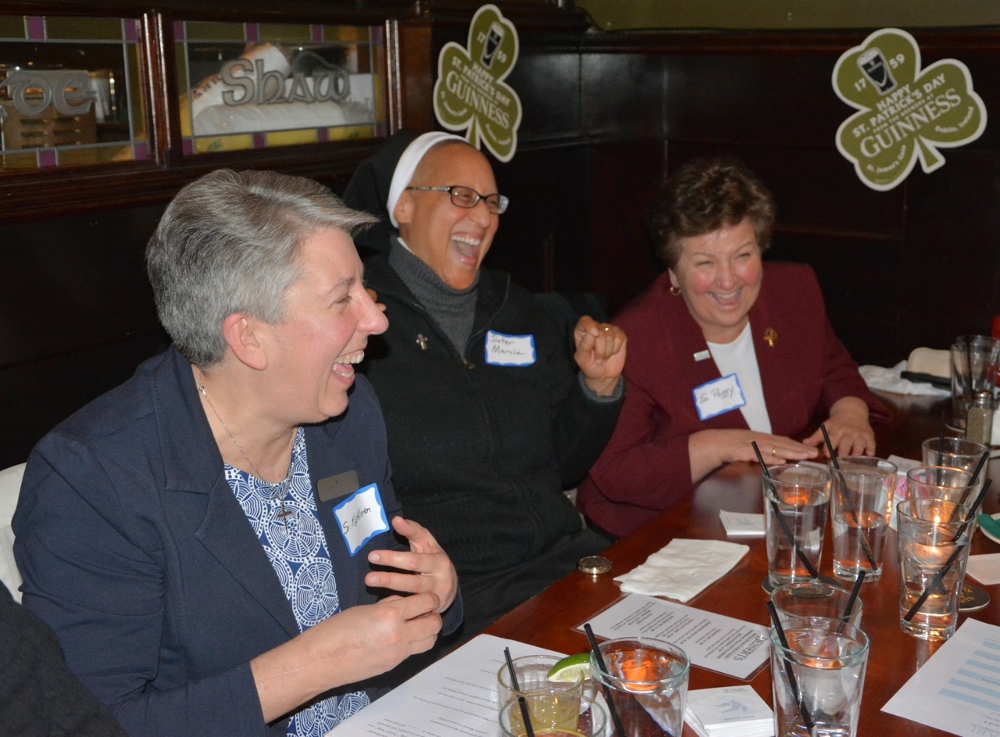 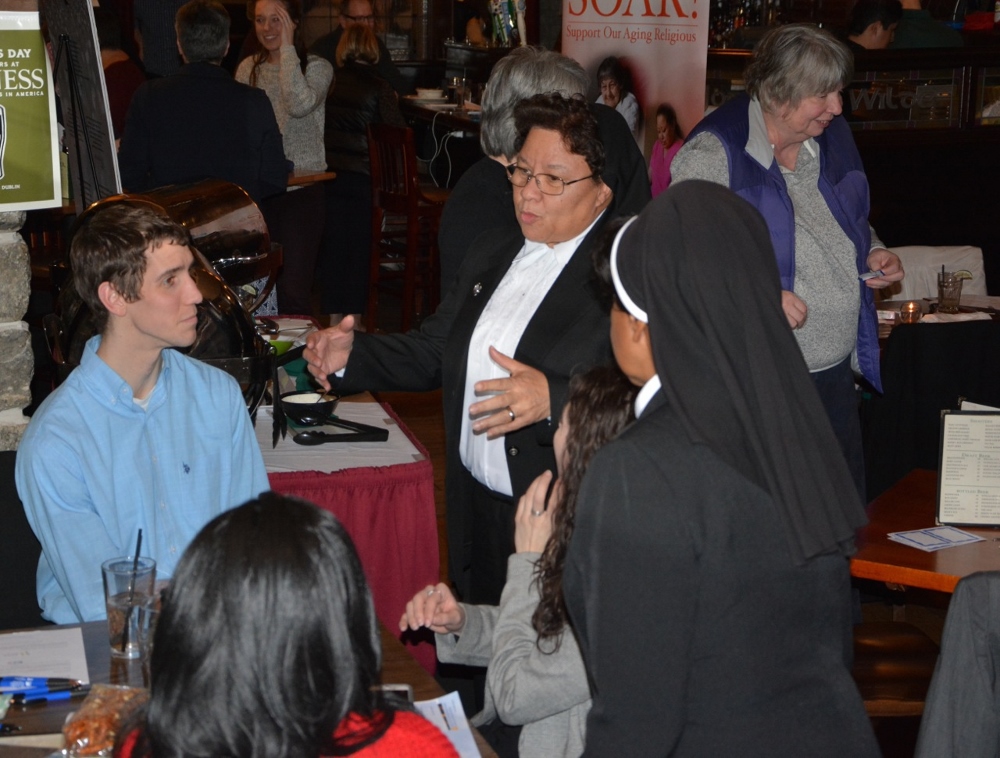 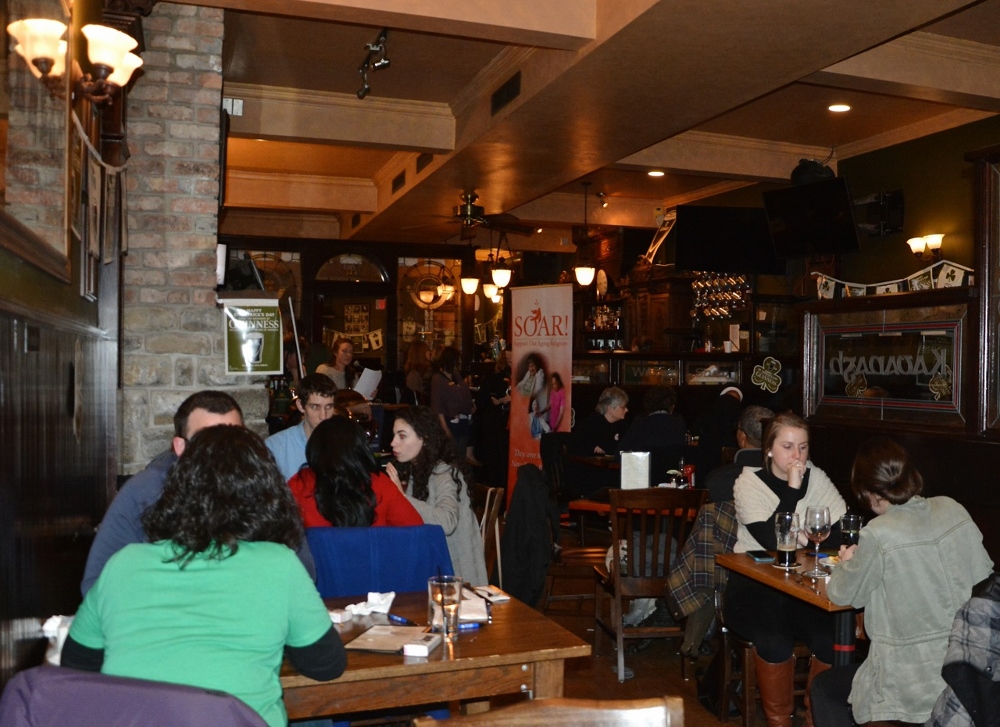 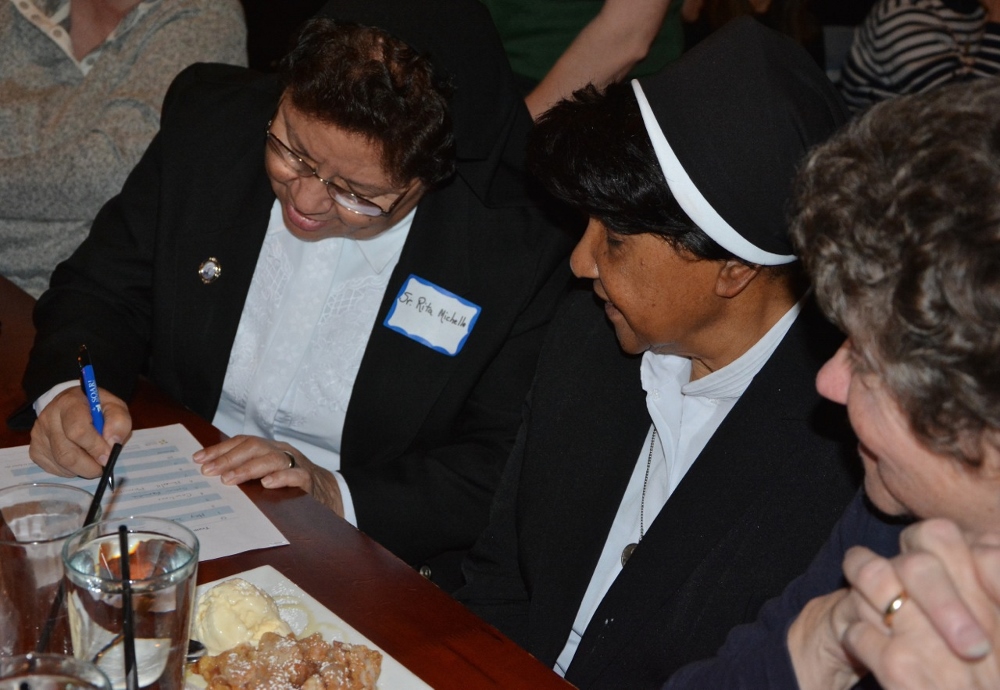 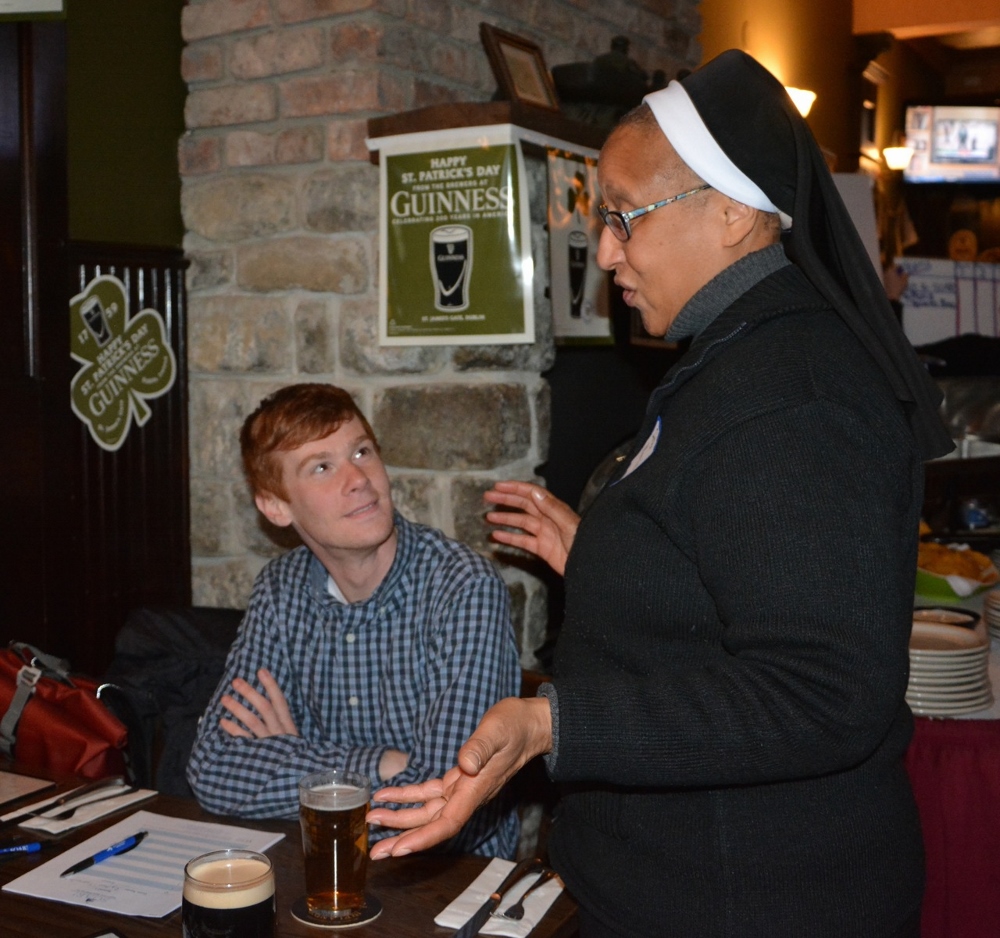 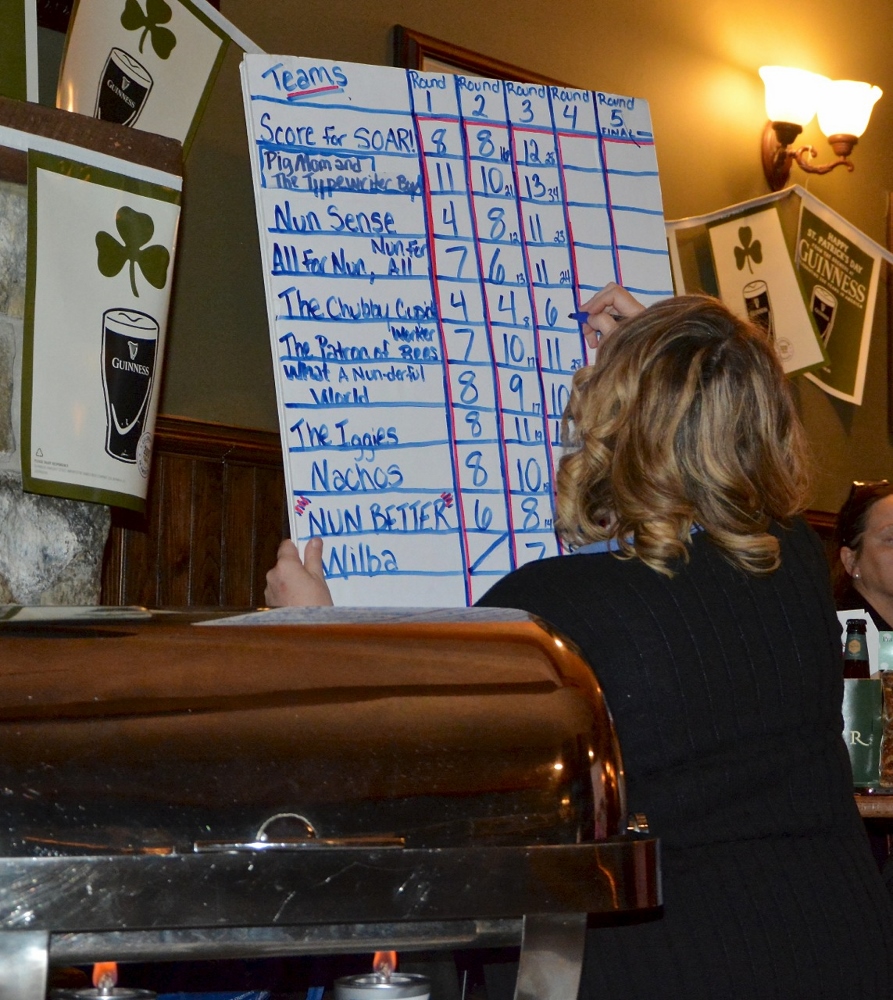