When 200 girls from local Catholic high schools arrive at Philadelphia's St. John Neumann Center on Feb. 12, they'll be participating in an event that's a tiny bit of history in the making: a one-day seminar marking the first time the (mostly black) Oblate Sisters of Providence and the (mostly white) Sisters, Servants of the Immaculate Heart of Mary will collaborate on a vocations project.

Designed by the Philadelphia Archdiocese's Office of Black Catholics to be one-part Black History Month celebration and one-part vocations event, the seminar will feature presentations from Sr. Marcia Hall, vocations director for the Oblate Sisters of Providence, and Sr. Marianne Therese Lallonne, vocations director for the IHMs in Immaculata, Pennsylvania, on Mothers Mary Lange and Theresa Maxis, the two black women who founded their respective congregations in time when the Catholic Church was decidedly hostile toward black people.

"As I see it," Lallonne wrote in an email to Global Sisters Report, "the goal is to ... show [Lange and Maxis'] strong sense of faith, courage and perseverance in following God's call despite the cultural challenges of the day."

That the Oblate Sisters and the IHMs were both founded by black women — in fact, in part by the same black woman — is the fulcrum on which their now decades of collaboration have turned.

Before she was known as Mother Theresa Maxis, the white foundress of the IHMs, Sr. Theresa Maxis Duchemin was a light-complexioned black woman who helped Mary Lange to found the Oblate Sisters of Providence, the first congregation for black women religious in the United States.

For 160 years, white IHM leadership worked overtime to distance themselves from Maxis' blackness. She was scrubbed from the official IHM history and, at one point, IHM leadership asked a cardinal to squash a book that would have told the truth about Maxis. It wasn't until the 1990s that the three IHM communities in Monroe, Michigan, and Immaculata and Scranton, Pennsylvania, openly embraced the Oblates as their spiritual sisters, allowing the process of healing and reconciliation to start.

Since then, the leadership of the four congregations has met annually, and they have taken on a number of joint ventures, including a committee dedicated to eradicating racism and another to support the Little Sisters of St. Therese of the Child Jesus in Rivière Froid, Haiti.

The seeds of this latest collaboration were planted a year ago, when Fr. Richard Owens, six months into his role as director of the Office of Black Catholics in Philadelphia, was given a copy of Scranton IHM Sr. Margaret Gannon's biography of Theresa Maxis.

Although he is a cradle Catholic, Owens said he had never heard about the IHM Sisters' black roots. But it inspired him to reach out to the IHMs and the Oblate Sisters about a joint vocations event.

At a time when the Catholic Church is battling yet another clergy sex abuse crisis, Owens said teaching young women how Lange and Maxis persevered in the face of anti-black racism might suggest to them that religious life can be a powerful way for them to also effect change in their church.

"As opposed to leaving the church, [Lange and Maxis] decided, 'Hey, I'm Catholic. It's a struggle, but I want to try to bring about some good from within the Catholic Church and its structures,' " he said.

It's not yet clear whether this joint seminar will be repeated every Black History Month, but Hall said she is open to the idea because she believes so strongly that not enough Catholics know about Lange and Maxis.

"I'm fairly certain that it's not history that's being taught or talked about in a lot of venues," she said. "But it's important as American history, it's part of church history, and it's part of women religious history."

Ultimately, Hall said she wants Catholic girls, regardless of their race, to understand that black women religious are not an inherent anomaly. 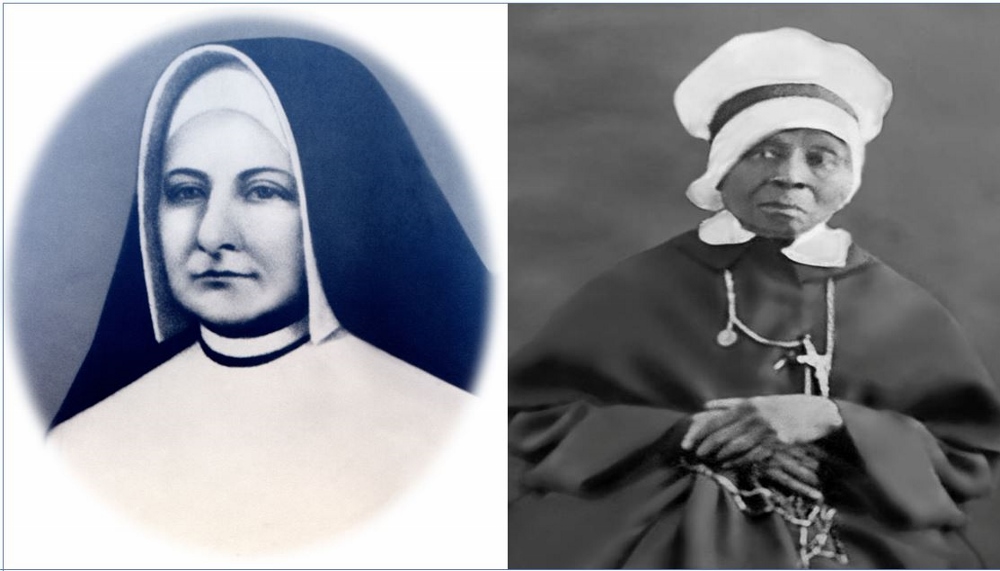