Women in theology share trials and triumphs at panel event 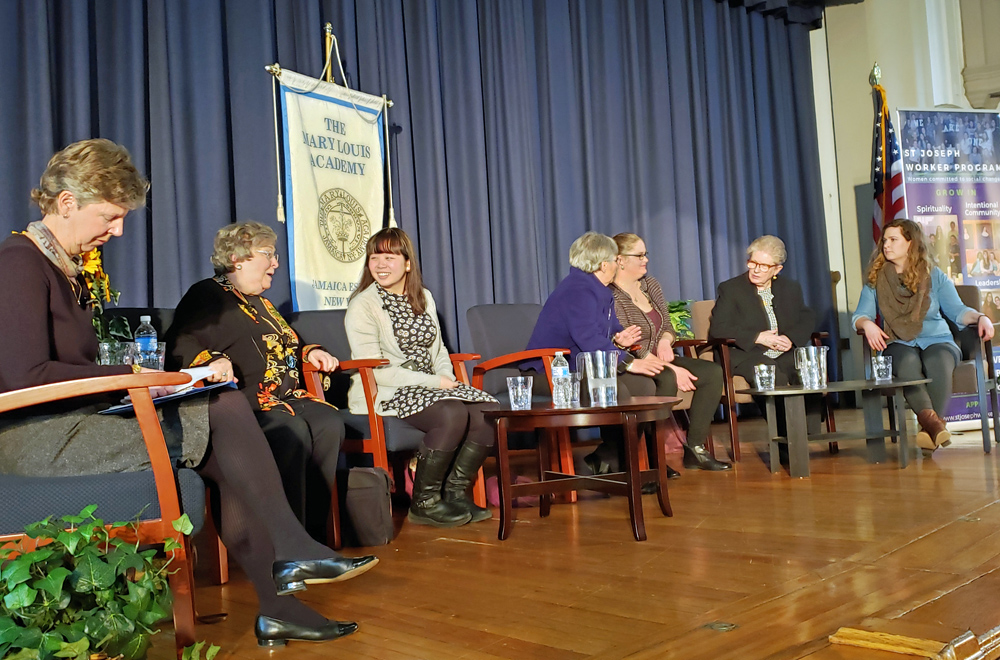 New York, N.Y. — Seven years ago, Sr. Annmarie Sanders interviewed theologian Sr. Sandra Schneiders, one of the first women to earn a doctorate of sacred theology from the Pontifical Gregorian University in Rome.

Schneiders, now a professor emeritus at the Jesuit School of Theology at the Graduate Theological Union in Berkeley, California, and a member of the Sisters, Servants of the Immaculate Heart of Mary, told Sanders, the director of communications for the Leadership Conference of Women Religious, or LCWR, and an IHM sister, that she was the only woman taking examinations in classes with 200 men. The men, Schneiders said, simply assumed the woman would not pass the exams.

"When I would come out first in the class," Schneiders told Sanders, the men "were stunned. It was like, 'Fido is not only walking on his hind legs, he's singing opera.' We women theologians were freaks of nature."

Schneiders' anecdote about the early 1970s still resonates, particularly in the Catholic world, say veteran theologians and young seminary students who gathered with Sanders at a public event March 10 at the Mary Louis Academy in the New York City borough of Queens to discuss accomplishments and ongoing challenges for female theologians and biblical scholars. 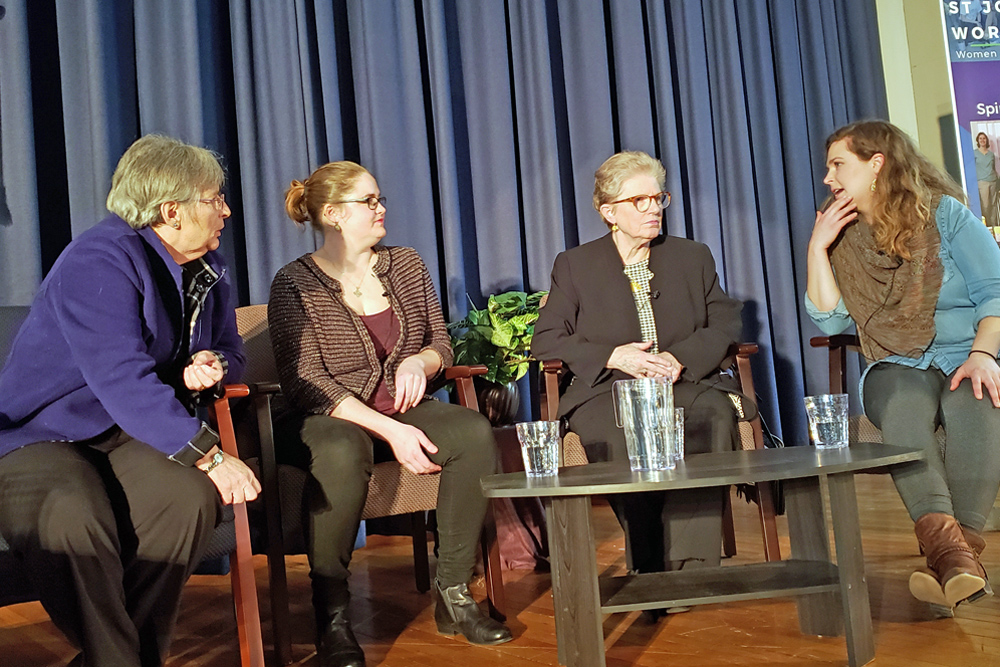 Among those participating at the March 10 event were, from left: Sisters of St. Joseph of Brentwood Sr. S. Maria Pascuzzi; Allison Connelly, a student at Union Theological Seminary in New York City; Sr. Mary Boys, who teaches at Union; and Logan McLean, a Master of Divinity student at Yale Divinity School. (GSR photo / Chris Herlinger)

"There is still a kind of rigidity at work," said Sisters of St. Joseph of Brentwood Sr. Maria Pascuzzi, who is associate dean at the Immaculate Conception Seminary School of Theology at Seton Hall University in New Jersey and who received advanced degrees in biblical studies from the Pontifical Biblical Institute and the Pontifical Gregorian University.

"We're still looked at like Fidos," she said. "And if you still have to explain yourself, that's sad after 40 or 50 years."

Which is why women must continue their struggle for recognition, panelists said.

"It's important for women to be in these spaces," said Logan McLean, a Master of Divinity student at Yale Divinity School in New Haven, Connecticut, seeking ordination with the Evangelical Lutheran Church in America. Quoting Schneiders about the definition of the Trinity, McLean added, "God is not two men and a bird."

And why should women not be entitled to write and reflect on the glories of a 2,000-year tradition, the women asked during the event, which coincided with National Catholic Sisters Week.

"The Bible has some of the greatest stories in the world," Pascuzzi said. "It's a world I like to inhabit, and it's a lot like our world."

The forum allowed younger female seminary students like Connelly who cannot become Catholic priests to engage in a dialogue with their elders, all of them respected Catholic scholars who teach at both Catholic and non-Catholic institutions. Aside from Pascuzzi, they included Sisters of St. Joseph of Brentwood Sr. Elizabeth Johnson, a professor emeritus at Fordham University in New York City, and Holy Names of Jesus and Mary Sr. Mary Boys, who teaches at Union Theological Seminary, a nondenominational Protestant institution.

The presence of the two students on the panel caused a brief stir: An unidentified woman, angry that McLean, a Lutheran, and Connelly, who is openly gay, were part of a public panel at a Catholic institution, shouted, "This is blasphemy, this is blasphemy," before leaving the academy's auditorium.

The disruption didn't faze the women, and Connelly in a later interview with GSR said she received words of sympathy and support at a post-event reception from a number of women in the audience, many of whom were Catholic sisters.

That did not surprise her. "Sisters are some of the most radical, institutional, Catholic-affiliated people I know," she said. 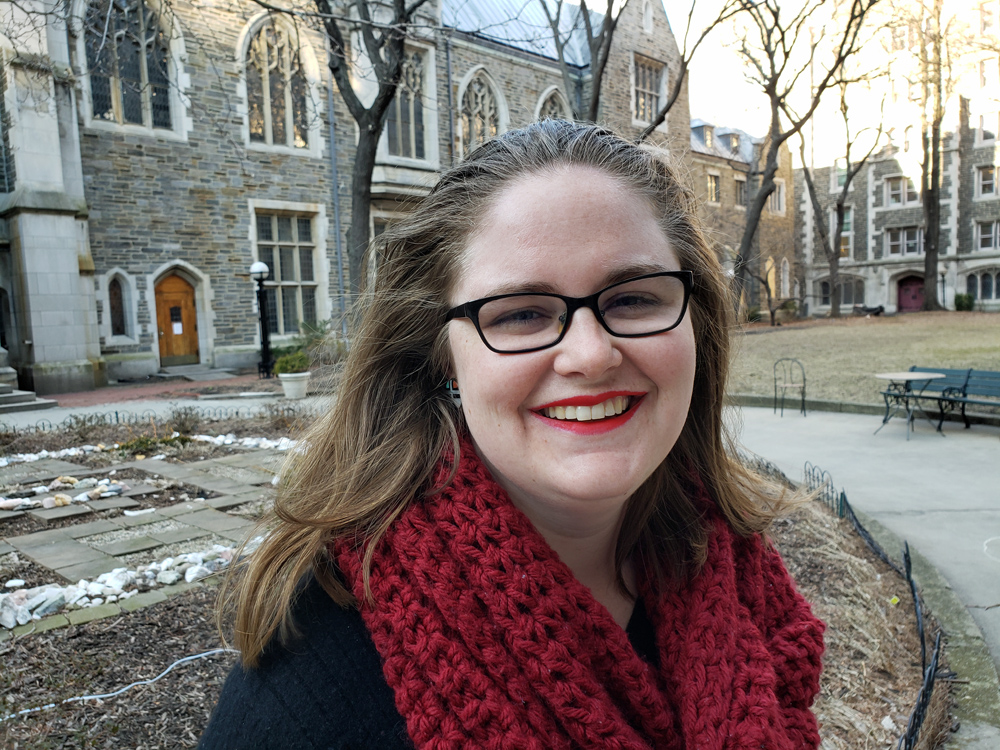 Allison Connelly, a first-year Master of Divinity student at Union Theological Seminary in New York City, in the campus' quadrangle. Connelly, 25, identifies as a queer woman and says her sexual and gender identity are integral to how she relates to God. (GSR photo / Chris Herlinger)

Based on moments of applause during the two-hour forum, those in the audience enjoyed the theme of different generations of female scholars making their mark on theology and biblical studies.

A consensus emerged among panelists that the field of theology is expanding and, at least in Catholic circles, it is likely to be continued by laity, not by clergy.

That, Boys said, parallels "a hunger" for Catholics in parishes to hear and wrestle with biblical and theological messages that have real resonance and meaning, "something [relevant] in their lives," she said. Sunday services, she said, are "so often a disappointment."

Pascuzzi added that the "questions that matter in the pews often question the status quo."

At the same time, Johnson stressed it is important that all those studying theology — laity and future clergy alike — continue to draw "from a rich, 2,000-year tradition" because it is important that people within the church appreciate tradition and doctrine and know to how to critique it intelligently.

"Be grateful that the work of theology is being carried on by a younger generation," Johnson said.

And be thankful Catholic women are engaged in the work of theology, said Stephanie Puen, another panelist and a doctoral student at Fordham who plans to return to the Philippines to teach theology after graduation.

"There's a lot more hope [in the Philippine church] when women are engaged," she said.

That engagement is crucial, the women said.

Connelly, who said it was a "real honor" to be in a public dialogue with Boys, Johnson and Pascuzzi, said one difference between her experience as a graduate student and those of the older women is the emphasis her education places on reading the work of female scholars and theologians. That was something almost unheard of during the education of Johnson and the older women.

Asked who influenced them during their theological studies, the older women mentioned such figures as German Jesuit theologian Karl Rahner and American biblical scholar Raymond Brown, who taught at Union Theological Seminary. By contrast, the younger women all singled out Johnson's work as an important influence in their studies.

Both at the public event and in the interview with GSR, Connelly, 25, said she identifies as a queer woman and said her sexual and gender identity are integral to how she relates to God. In calling herself an aspiring queer theologian, she told GSR that many people focus only on the designation of "queer" and not of "theologian."

"It's hard for some people to get to the theologian part," she said, adding that the intersection of theology and disability might be the subject of possible doctoral work.

Connelly said she believes she can hold loyalties to the Catholic Church and the United Church of Christ, the denomination into which she hopes to be ordained.

"They're both very important to me," she said.

The event at Mary Louis Academy was co-sponsored by the Office of the Vicar for Religious, Diocese of Brooklyn; the Office of Young Adult Ministry of the Sisters of St. Joseph of Brentwood; and the St. Joseph Worker Program.