Skip to main content
This story appears in the Landfills and Sustainable Development Goal 12: Responsible Consumption and Production feature series.

Her gloved hands deep in buckets of fruit pieces, vegetable peels and other food dreck, Sr. Ana Martinez de Luco flashes a smile as she mixes what will become Sure We Can's own brand of compost.

She then tosses clear plastic bags bulging with cans into piles that tower above her head. She hops on a forklift to move wooden pallets, clearing a new spot for the vegetable garden sprouting in an industrial site in Brooklyn. And as she weaves her way around bins, bags and crates, she greets each of the more than a dozen people — often known as "canners" — who are there to count, sort and redeem what they've collected from the endless stream of cans and bottles that New Yorkers discard.

As the only nonprofit redemption center in New York City, Sure We Can is an economic lifeline for more than 400 canners. They can cash in what they've gathered — in small amounts or bulk — for the state-mandated 5 cents per piece, or they can earn a bit more by counting and sorting, which helps Sure We Can reduce its costs.

The organization, co-founded in 2007 by Martinez de Luco and Eugene Gadsden, has become a community. Canners serve on its board of directors, and intertwined with Sure We Can's mission of promoting environmental sustainability is helping its clients feel supported and respected.

With contagious enthusiasm, Martinez de Luco describes big plans for Sure We Can.

"Here is where the garden will go," she said, pointing to a concrete slab. A classroom will take shape where the garden is now for field trips, classes and theater groups in which students learn about environmental responsibility and sustainability. A rainwater collection system provides water for the squash, tomatoes and other plants. The composting system, used on Sure We Can's own garden the last four years, will soon package fertilizer for sale.

Martinez de Luco is on a mission — and on a deadline. On July 31, Sure We Can kicks off a campaign to raise $3 million in 18 months to buy its current location in Brooklyn, the organization's fifth home in 10 years, which it has been renting since 2010.

Martinez de Luco credits the start of Sure We Can to her partnership with co-founder Gadsden, the "king of canners" who taught her the fine points of can-collecting more than a decade ago.

Needing to get her feet on the ground

In 2004, she was working in New York at UNANIMA, a nongovernmental coalition of 20 congregations of Catholic sisters that aims to educate United Nations policymakers on issues concerning women and children living in poverty; immigrants and refugees; and the environment. She felt a call to serve the poor more directly.

"I found meaning in doing [U.N. work], but my personality — my gift is just to work with people and to share life with people, especially people who are in need," she said. "To go in the streets at the same time I was going to the U.N. helped me keep my feet on the ground."

She had grown up in a small village in the Basque area of Spain, entered religious life at age 19 as a Carmelite Sister of Charity and had spent much of her life working in social services in the Philippines. (She became part of the Sisters for Christian Community in 2014.)

She volunteered with an organization serving the homeless and began canning as a way to earn a bit of money and, more importantly, the trust of those she wanted to help.

"The fact that I started picking up cans helped me to enter faster the community of people in the street," she said. "I was no longer a strange figure but showed them that I was doing what they were doing, so they thought I must be in great need."

A mutual friend introduced her to Gadsden, who had taught dozens to can efficiently. He worked with Martinez de Luco for months before learning she was a sister.

"I've believed in God all my life, and maybe it's a good thing that I ran into a sister — a good thing and a God-thing," Gadsden said.

In 2005, a cash-in center closed, leaving canners in Manhattan without an easy way to redeem what they collected. Retailers would take some cans and bottles, but it wasn't practical for canners to visit multiple sites.

Martinez de Luco and Gadsden talked of the need for a new large-scale redemption center. They approached various companies and organizations with no success. After one particularly disappointing meeting, she said Gadsden reassured her, "When one door is closed, another door is opened."

Her work at the U.N. for UNIMA and another nongovernmental organization, Partnership for Global Justice, helped open the door to assist those on the street. After Martinez de Luco told the sisters there about the issue with the redemption center, one arranged a meeting with a friend who was a Wall Street financier. He put Martinez de Luco in contact with an attorney to draw up incorporation papers in 2007.

They recruited board members. At first, Martinez de Luco was reluctant to join the board, worrying that it would separate her from the canning community. But when she and Gadsden realized they needed to have canners on the board so that their needs and views were represented, they joined also. Sure We Can's board now has canner representatives as part of its structure, one from each of the primary language-speaking communities — Spanish, Chinese and English — of people who form its clientele.

Sure We Can first opened in a public storage area in Manhattan in 2008. But the site was close to the upscale shops and wealthy residences of Fifth Avenue, and neighbors blamed Sure We Can for attracting homeless people to the area. Then began a series of moves until 2009, when it found its current spot in Brooklyn, nestled near a school and alongside other industrial operations.

"Our roots are deep. It would be hard to move," she added, looking around at the site, with its system of sorting bins and bags, a trailer that serves as an office, and a bicycle that provides the pedal-power to sift the compost.

Brightly colored murals decorate wagons and walls. The site owners are a family that has experienced hardship and has worked with Sure We Can but now want to sell the site, Martinez de Luco said. Sure We Can's lease expires at the end of December 2017.

"Sometimes I am dreaming of all that has to be done," Martinez de Luco said.

The grassroots #60MillionCans fundraising drive that kicks off July 31 is to convince individuals, buildings, schools and businesses to collect and contribute empty cans and bottles — or donate the equivalent in money — along with foundation and corporate donations to help Sure We Can buy the site.

This year, Sure We Can will handle more than 10 million pieces. The nonprofit works on a margin basis: Collectors get a minimum fee for unsorted cans and bottles and more per tray of sorted material. The companies that pick up the bottles and cans pay a few cents more for sorted and bagged cans and bottles. The nonprofit employs 10 workers on a full-time or part-time basis.

Martinez de Luco credits Sure We Can's team — staffers such as Rene del Carmen, "who can fix anything," and volunteers like Noel Colaneri, who serves on the board and had the initial idea for the fundraising drive — for the organization's success and community spirit.

It was that welcoming atmosphere that struck Pierre Simmons when the musician first visited Sure We Can more than two years ago to redeem cans and bottles he collected to supplement his income.

"There was an air about it that was very personal," he said. "People were willing to help me, to show me the ropes and how to sort stuff out right."

He became a regular client, then presented a speech for an Earth Day celebration that Sure We Can was involved with and joined the board as a canner representative. He said he didn't know of Martinez de Luco's background as a sister initially, but after meeting her, he said he realized the organization's "giving and spiritual side came from her."

The spirit of Sure We Can will remain as Besada takes over leadership, Simmons said.

"She's been getting a lot of mentoring from Ana," he said. "And we will still see Ana around — she's the heart of this thing."

Besada knows that she is filling big shoes. "I'm taking her job," she said. "Ana can't be replaced."

A native of Argentina, Besada knew of similar cooperatives, organizations of cartoneros or cardboard collectors there. She began volunteering with Sure We Can in 2013 with a friend, making wallets out of plastic bags while earning a master's degree in sustainable development at Columbia University.

Initially, she planned to focus her career on corporate sustainability but began to recognize Sure We Can's potential.

"I realized I was spending more time talking with Ana about the issues here," she said.

She prepared a vision plan for the organization and began helping with other projects as a volunteer. She joined the board, presented an updated proposal for fundraising and redesigned the website. She then became president of the board and took on more responsibility. When Martinez de Luco expressed a desire to step down, the board appointed Besada to take over as executive director.

Besada sees opportunities to expand Sure We Can's operations once it succeeds in the #60MillionCan drive to secure its site. Like supermarkets and other redemption centers, Sure We Can gets 8.5 cents per can or bottle from distributors, which will only pick up their brands of containers. Hence, the need — and incentive — to have canners sort material. The additional 3.5 cents and additional grants cover operating costs.

"I can bring in more of the business side to make it work on its own, to make it economically sustainable and formalize the compost and other programs so they don't have to rely on grants," Besada said.

The transition has been purposefully slow, Besada said. "Everybody knows me. I've been doing all the different jobs to get to know the people. That is very important. This is a community, and it takes time."

Martinez de Luco is looking forward to her break but more so to coming back to Sure We Can to spend more time with people. Her heart goes out particularly to the elderly who sustain themselves by redeeming bottles and cans — the average age of canners at Sure We Can is 65. She knows the canners' families, whose husbands are sick, how their children are doing in school.

"In coming back, I would just return to what I like most and is the easiest thing for me to do: being Ana, which is the vision that brought me to this, just to accompany people on the streets, at the stations, in the parks," she said. "People who feel sick in many ways, sometimes they need someone to encourage them to go to the hospital and accompany them. Sometimes it is just to listen." 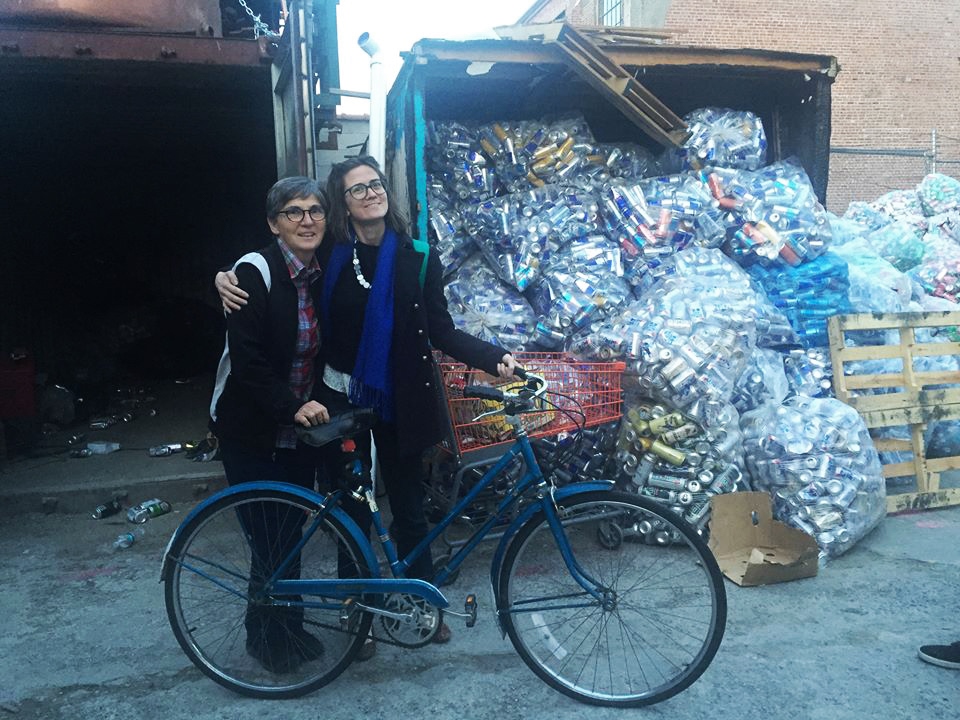 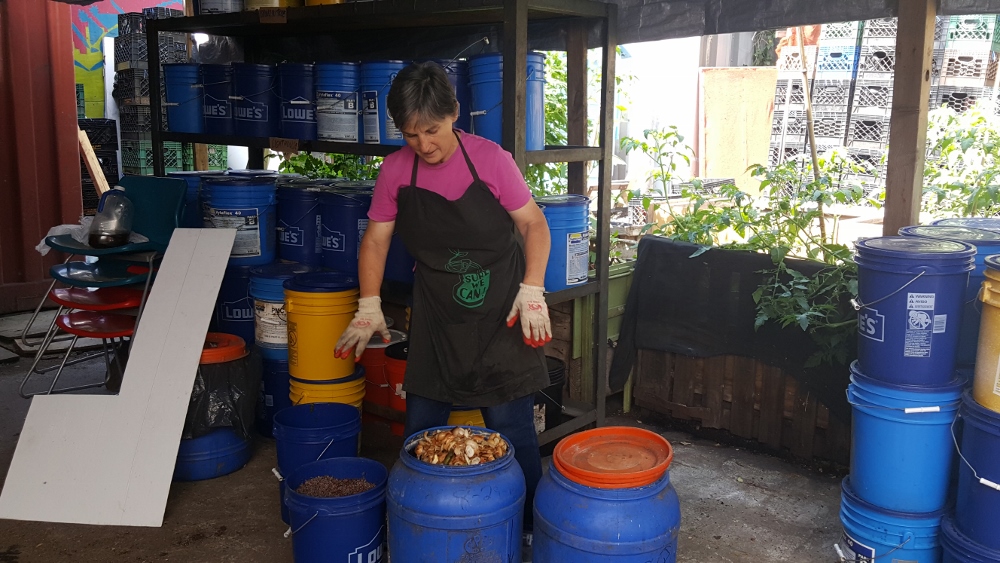 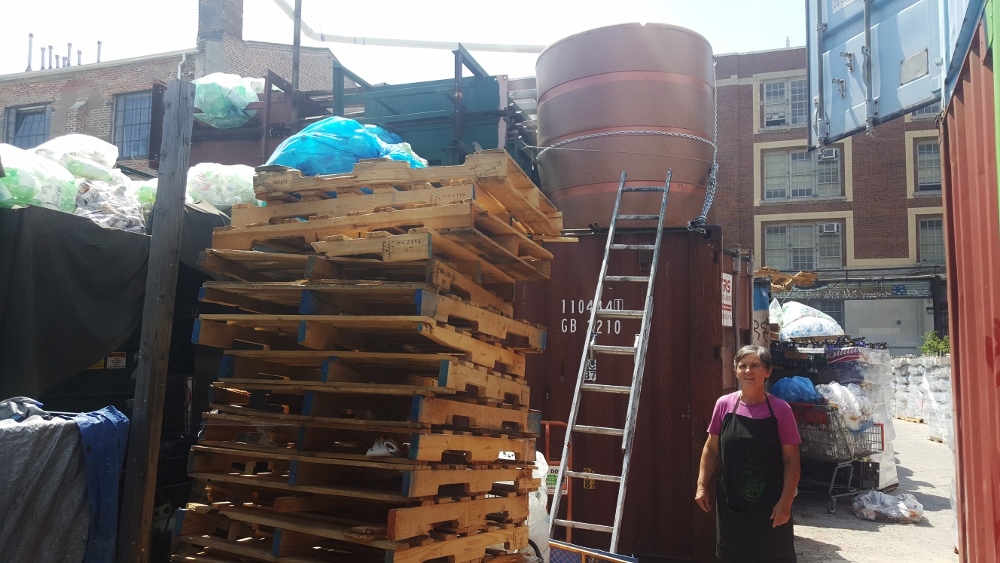 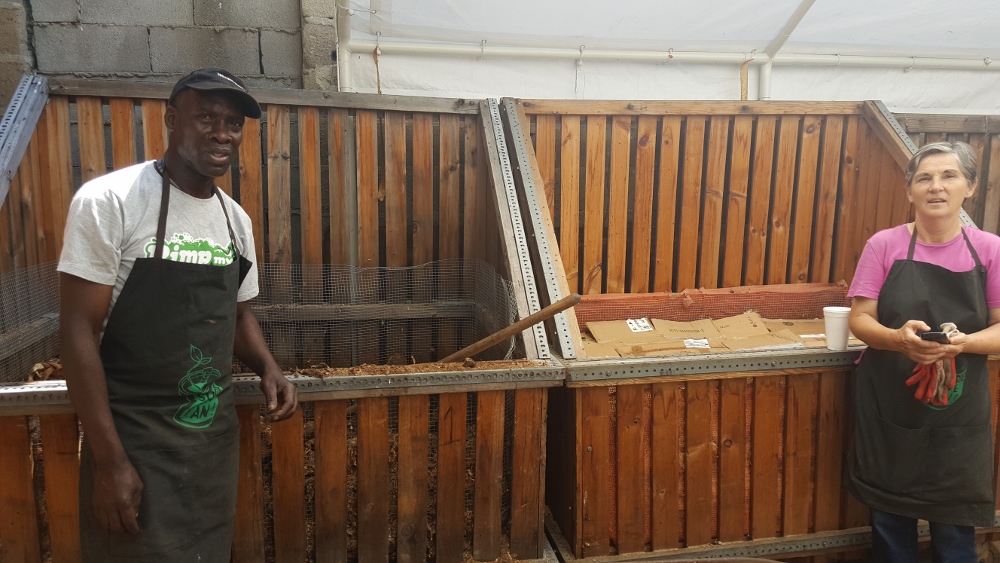 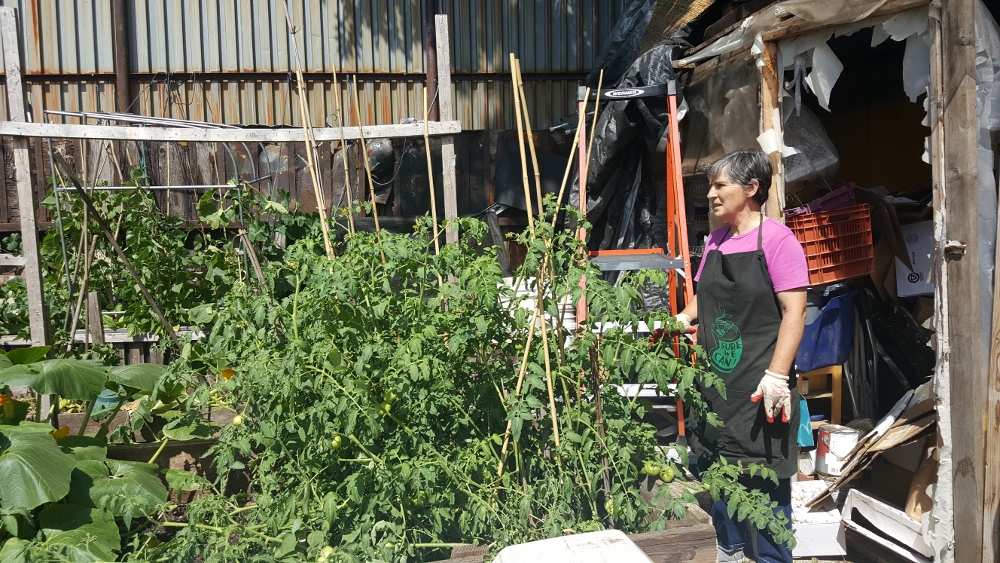 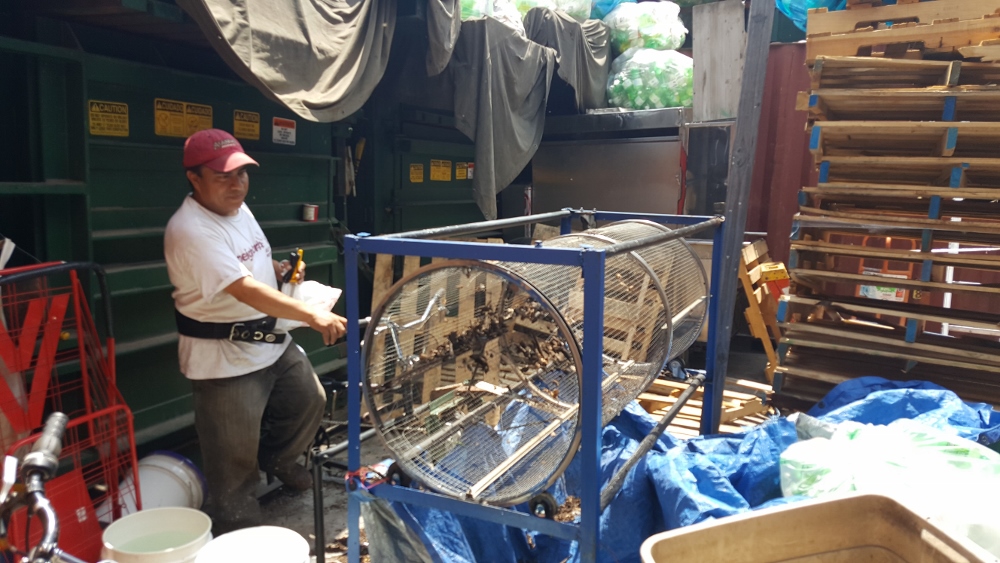 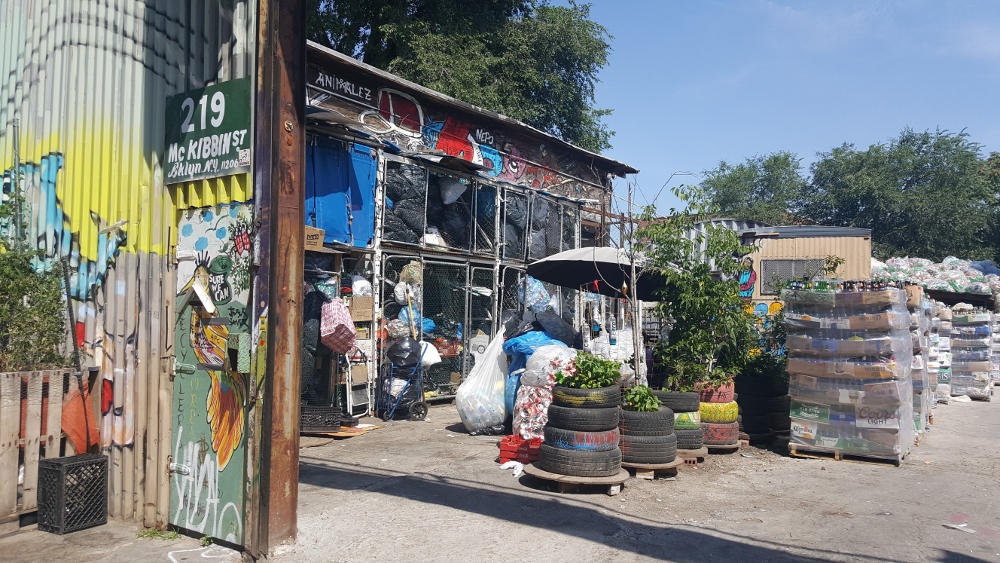