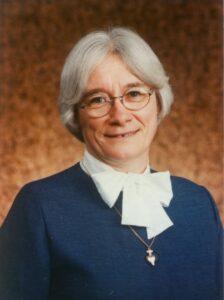 Sr. Shirley Kolmer grew up on a farm in Southern Illinois and left as a teenager to join the Adorers of the Blood of Christ congregation convent in Ruma. As a religious, she also taught at St. Louis University, where she had won a Fulbright scholarship to educate young Liberian women. She briefly returned to Ruma to serve as provincial leader before returning to Liberia. She was murdered less than a year later, at age 61, on Oct. 23, 1992, outside of the sisters’ residence in Gardnersville, Liberia, along with Srs. Agnes Mueller and Kathleen McGuire as part of warlord Charles Taylor's attack on Monrovia, Liberia's capital.