Submitted by Michael O'Loughlin, Marketing and Communications Director, Milwaukee, Wisconsin  You can find a death notice or obituary here. 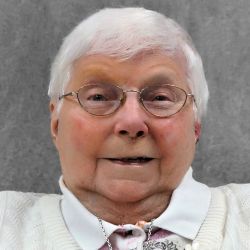 School Sister of St. Francis Josephine Seier who lived her religious vocation as a homemaker and caretaker died on May 1, 2020 at Our Lady of the Angels, in Greenfield, Wisconsin. Sister was 94 years old.

Sister Josephine is survived by a sister, Betty Schmitz of Albion, Nebraska; nieces, nephews and cousins; and the School Sisters of St. Francis community with whom she shared her life for 77 years.

In the Diocese of Lincoln, Nebraska, Sister served at Catholic Social Services in Lincoln (1969-1971).
In the Archdiocese of Milwaukee, Sister served as a homemaker at St. Joseph Convent in Waupun (1952-1958), and in Milwaukee she served in personal services at Maryhill Retirement Center (1995) and at Sacred Heart (1995-1996), served as a receptionist at LaFarge Lifelong Learning Institute (1996-2001), and cared for the elderly at Interfaith Older Adult Programs (2001-2004). She also ministered at St. Joseph Convent in Campbellsport (2004-2012).

In the Diocese of Orange, California, Sister served in parish ministry at St. Timothy Parish in Laguna Niguel (1991).

In the Diocese of Rockford, Illinois, Sister cared for the elderly at Maria Linden Retirement Center (1994-1995).

In the Archdiocese of Santa Fe, New Mexico, Sister served as a homemaker at St. Vincent Hospital in Santa Fe (1972-1973).

In the Diocese of Sioux Falls, South Dakota, Sister served as a homemaker at St. Agatha Convent in Howard, South Dakota (1943-1944).

In the Archdiocese of St. Paul/Minneapolis, she served as homemaker at St. Wenceslaus Convent in New Prague, Minnesota (1971-1972).

In her retirement, Sister served in the ministry of prayer and presence at Our Lady of the Angels Convent in Greenfield, Wisconsin from 2012 until the time of her death.

A Funeral Liturgy was held on May 6, 2020 at St. Joseph Chapel, Milwaukee. Interment was at Mount Olivet Cemetery in Milwaukee.