National Catholic Reporter's website is hosting a comments page for your discussion about the apostolic visitation report and what it means for the church and future of women religious.

Keep up with all of GSR's coverage of this issue on this series page, which lists all the related stories together (you can also click the Apostolic Visitation button at the top of any article, next to the date.)

The final report of a controversial and unprecedented six-year Vatican investigation of tens of thousands of U.S. Catholic sisters takes a roundly positive, even laudatory, tone towards their life and work but also includes several couched but barbed criticisms of them.

[Read the report here. You can watch the archived press conference here, too.]

Using some form of the word "gratitude" eight times over its 12 pages, the report also acknowledges the suspicion many sisters had over the launching of the investigation and says the Vatican is seeking "respectful and fruitful dialogue" with those who refused to collaborate in the process.

The Vatican's congregation for religious life, which wrote the report, states at one point: "We express the hope that together we may welcome this present moment as an opportunity to transform uncertainty and hesitancy into collaborative trust, so that the Lord may lead us forward in the mission he has entrusted to us on behalf of the people we serve."

The Vatican investigation, known formally as an apostolic visitation, was launched by the religious congregation in 2008 with the approval of Pope Benedict XVI. Likely the largest such investigation in church history, it involved inquiry into some 341 female religious institutes in the U.S. that include some 50,000 women.

Both U.S. women religious and lay people have been keenly awaiting release of the final visitation report after several years with little information about the state of the investigation, one of two separate inquiries of U.S. women religious launched by different Vatican offices in recent years.

The Vatican released the final visitation report Tuesday morning at a press conference with the prefect of the religious congregation, Cardinal João Bráz de Aviz, and its secretary, Archbishop José Rodríguez Carballo.

Dividing the results of the investigation into 11 topic areas, the report first bluntly acknowledges the decline in numbers of Catholic sisters over the past 50 years but says that "the very large numbers of religious in the 1960s was a relatively short-term phenomenon that was not typical of the experience of religious life through most of the nation’s history."

The report then speaks at length regarding the visitation's findings about the charism and identity of the women's communities and their promotion and formation of new vocations.

In the first area, the report roundly praises the work of women religious in living out the charisms of their founders. "Sisters today generously and creatively place their charism at the service of the needs of the Church and the world," it states.

The report also acknowledges that many women's communities are developing programs for lay people in order to carry on their charisms in an age of fewer vocations.

"This Congregation praises these creative ways of sharing the charismatic gifts given by the Holy Spirit to the Church and asks that the essential difference between the vowed religious and the dedicated lay persons who maintain a special relationship with the institute be respected and celebrated," it states.

In the second area, the report again expresses gratitude to the women for their work in promoting new vocations to religious life but also obliquely criticizes U.S. women's communities who have chosen not to wear religious habits following the reforms of the Second Vatican Council.

"Vocation and formation personnel interviewed noted that candidates often desire the experience of living in formative communities and many wish to be externally recognizable as consecrated women," states the report.

"This is a particular challenge in institutes whose current lifestyle does not emphasize these aspects of religious life," it continues.

The report also makes similar oblique, but sharp, critiques of the women in other areas, especially regarding the prayer life of their communities.

In a section titled "Praying with the Church," the report states that a review of the constitutions and other decrees of the women's communities "generally revealed that institutes have written guidelines for the reception of the sacraments and sound spiritual practices."

But the report continues: "This Congregation asks the members of each institute to evaluate their actual practice of liturgical and common prayer. We ask them to discern what measures need to be taken to further foster the sisters’ intimate relationship with Christ and a healthy communal spirituality based on the Church’s sacramental life and sacred Scripture."

In the next section, "Called to a Life Centered on Christ," the report issues a warning.

"Caution is to be taken not to displace Christ from the center of creation and of our faith," it states. "This Dicastery calls upon all religious institutes to carefully review their spiritual practices and ministry to assure that these are in harmony with Catholic teaching about God, creation, the Incarnation and the Redemption."

The visitation is one of two investigations of U.S. women religious launched by different Vatican offices in recent years. The other investigation is a doctrinal assessment of an umbrella group of U.S. sisters known as the Leadership Conference of Women Religious (LCWR) and is being led by the Vatican's Congregation for the Doctrine of the Faith.

Tuesday's report does not concern the investigation of the LCWR.

The visitation report is signed by Braz de Aviz and Rodríguez and is dated Sept. 8, the Catholic feast day of the Nativity of the Blessed Virgin Mary.

Millea, superior general of the Apostles of the Sacred Heart of Jesus, said during the conference that she "immediately felt overwhelmed" when she was asked to lead the visitation, but did so "keenly aware of my own limitations."

She also said that congregational leaders have told her the process "yielded surprising positive results" such as "honest confrontation with the transformative power of the Word of God" and "earnest delving into Church documents about consecrated life."

Holland, vice president of the Monroe, Mich., Sisters, Servants of the Immaculate Heart of Mary, stated clearly that she and other U.S. women religious were upset by the original announcement of the visitation.

"The expressed purpose [of the visitation], 'to look into the quality of life of religious women in the United States,' was troubling," she said. "Some congregations reported that their elder sisters felt that their whole lives had been judged and found wanting."

Yet, said the LCWR leader, the visitation has resulted in an "affirmative and realistic report."

"The report we are receiving today reflects our reality – in its commonality and diversity," she said. "Our achievements have been recognized with gratitude, and the nature of our challenges reviewed."

Saying that she was also speaking (in addition to journalists) to women religious watching the press conference by live-feed, Holland said "it occurred to me that as the report is read, many may recognize expressions in the document which could have been copied from their Institutes’ Chapter documents."

"There is an encouraging and realistic tone in this report," she continued. "Challenges are understood, but it is not a document of blame, or of simplistic solutions. One can read the text and feel appreciated and trusted to carry on."

The religious congregation, known formally as the Congregation for Institutes of Consecrated Life and Societies of Apostolic Life, launched the apostolic visitation in 2008 at the command of Cardinal Franc Rodé.

Rodé, who was the head of the congregation but has since retired, initially said its aim would be to study the community, prayer and apostolic life of women's orders.

But almost a year into the study, Rodé told Vatican Radio the investigation was in response to concerns, including "by an important representative of the U.S. church," regarding "some irregularities or omissions in American religious life."

"Most of all, you could say, it involves a certain secular mentality that has spread in these religious families and, perhaps, also a certain 'feminist' spirit," Rodé said then.

Tuesday's report does not does not acknowledge those concerns of Rodé, instead saying that the visitation was started by the congregation "because of our awareness that apostolic religious life in the United States is experiencing challenging times."

"Although we knew that any initiative of this magnitude would have its imperfections, we wished to gain deeper knowledge of the contributions of the women religious to the Church and society as well as those difficulties which threaten the quality of their religious life and, in some cases, the very existence of the institutes," the report states.

Explaining the process of the visitation itself – which included a questionnaire of religious superiors and on-site visits to some 90 communities nationwide – the report says the investigation "sought to elicit from the leaders and members of the institutes a sincere and transparent depiction of their lived reality."

In a later section on collaboration on the church's evangelical mission, the report notes that many U.S. women religious have worked in varied areas of life – from education, to healthcare, to pastoral ministry, to social justice work.

The report states that the congregation "wishes to express the profound gratitude of the Apostolic See and the Church in the United States for the dedicated and selfless service of women religious in all the essential areas of the life of the Church and society."

In a section on ecclesial communion, the report states: "A number of sisters conveyed to the Apostolic Visitator a desire for greater recognition and support of the contribution of women religious to the Church on the part of its pastors."

"They noted the ongoing need for honest dialogue with bishops and clergy as a means of clarifying their role in the Church and strengthening their witness and effectiveness as women faithful to the Church’s teaching and mission," it states. "Some spoke of their perception of not having enough input into pastoral decisions which affect them or about which they have considerable experience and expertise."

"This Congregation is committed to collaborate in the realization of Pope Francis’ resolve that 'the feminine genius' find expression in the various settings where important decisions are made, both in the Church and in social structures," the report states.

Share your comments on this special page for the apostolic visitation at National Catholic Reporter here. 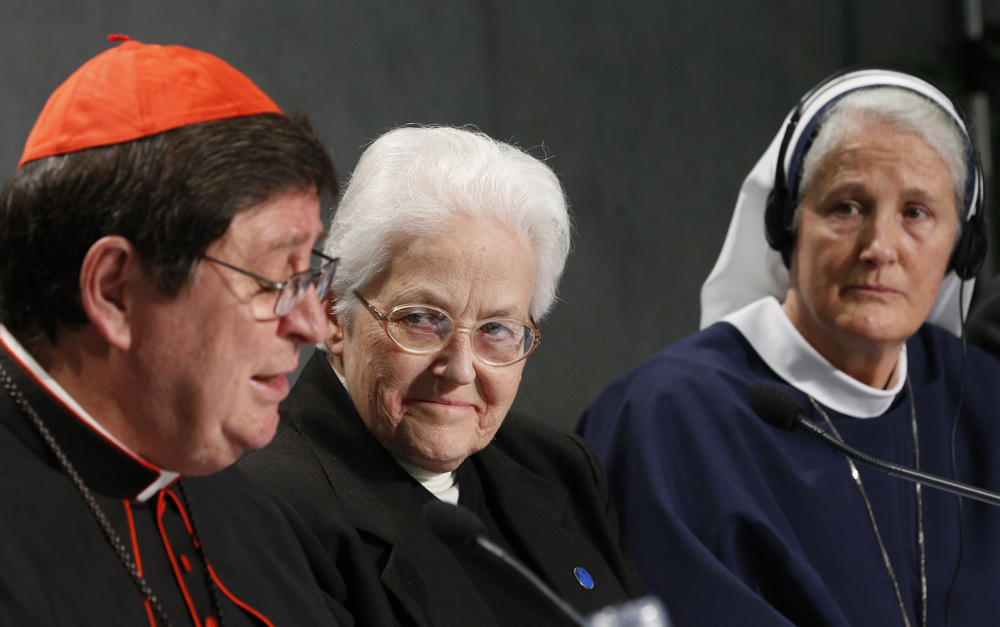 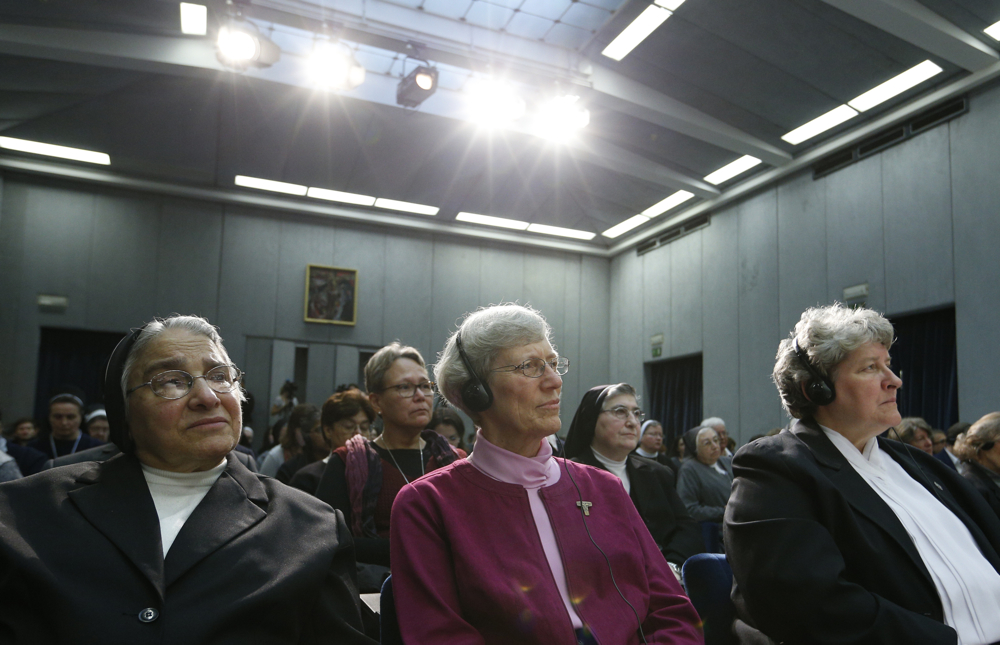 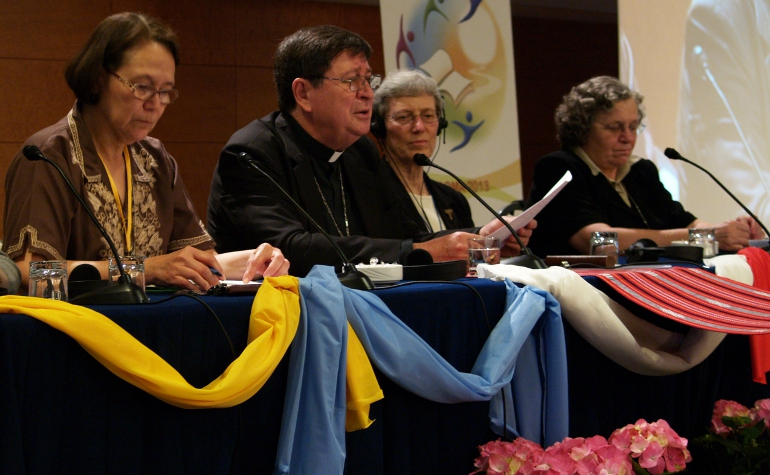