by Kirsten Rotz
This article appears in the Notes from the Field feature series. View the full series. 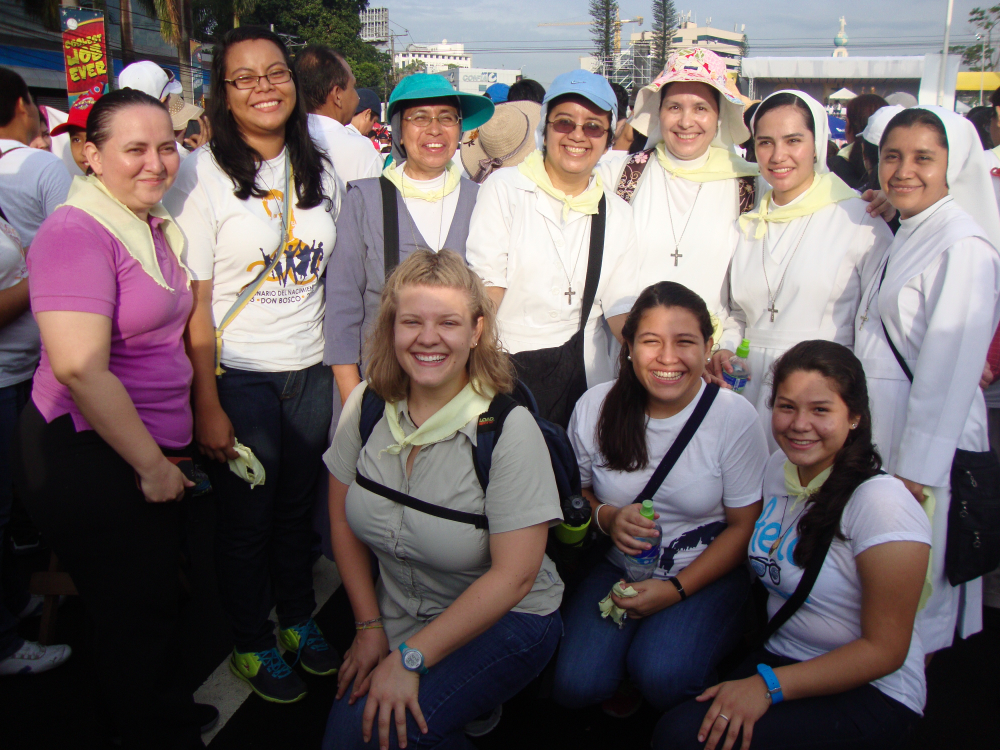 San Pedro Sula, Honduras — From Global Sisters Report: Notes from the Field is our summer blogging project. Working with the Catholic Volunteer Network, we’ve enlisted four young women working in ministries of Catholic sisters around the world – Honduras, Thailand, Ethiopia and the United States – to blog about their experiences.

To give life to the poor, one must give from his own life, indeed give even his own life. The greatest sign of faith in a God of life is the witness of a person willing to surrender his own life. ‘There is no greater love than this: to lay down one’s life for one’s friends’ (Jn 15:13).

-Oscar Romero at a speech at Belgium’s University of Louvain

Saturday morning, May 23, dawned bright and shiny. It was as if the torrential downpours, thunder and lightning from the night before were scouring the city for its big day. Hundreds of thousands of people journeyed from near and far to participate in a celebration of life, death and social justice.

Five members of my community – Sor Paty, Sor Gladis, Fátima, Rocío and myself – traveled to San Salvador, El Salvador, for the beatification of Monseñor Oscar Romero. We filled our minibus with various other sisters and volunteers from other nearby Salesian communities. I was the only non-Salvadorian.

We joined the group from the Salesian parish Don Rúa at 5 a.m. to walk to the Savior of the World Plaza, or the area that would host the beatification Mass of Romero. As we walked the five kilometers, our group that had accumulated to almost 150 people said the rosary and sang praise and worship songs, unified with yellow bandanas around our necks. The sun warmed our backs as we marched on, singing, turning the corner onto the main city street that attendees would pack themselves into, watching the Mass on one of the many flat-bed televisions parked along the 10 city blocks.

Our early departure allowed us to arrive early enough in the plaza to be able to nearly see what was happening. It wasn’t possible to actually see much of the Mass, but we would be able to follow what was going on on the two big screens flanking the altar. 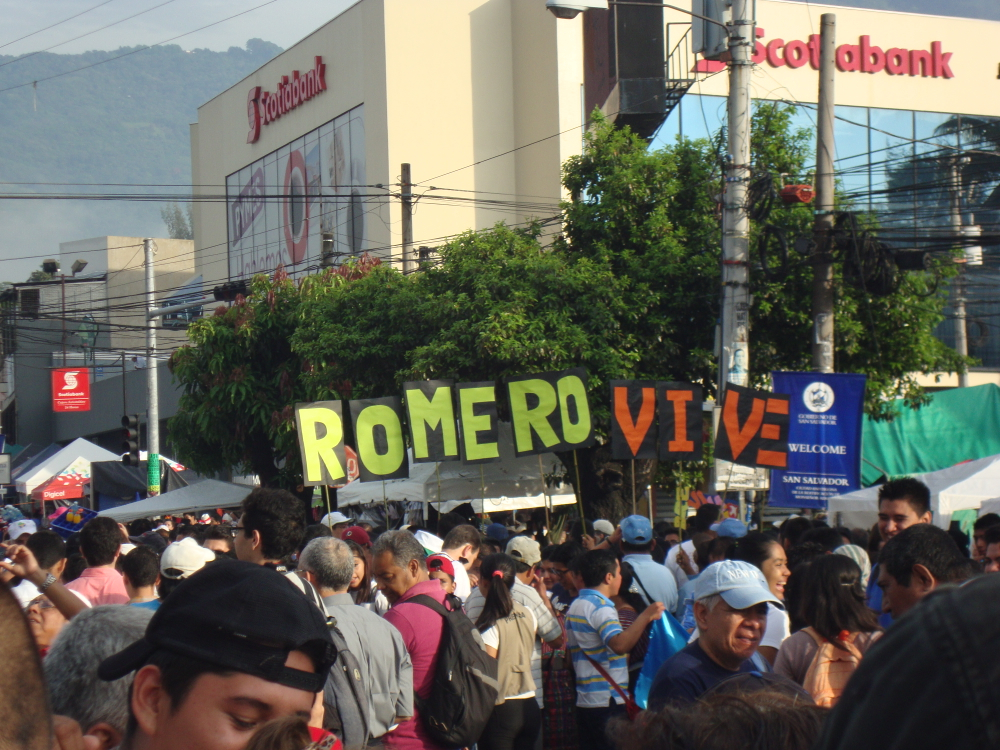 With four hours until the start of the Mass, the other volunteers decided to do a bit of “touring.” We wanted to take in all the sights and sounds possible. After they had promised not to lose me, la gringüita or “their little white girl,” Sor Paty let go of my backpack strap that she’d hanging on to and sent us off into the crowds.

We snaked along, greeting priests, brothers, sisters, deacons and lay people of all kinds. Along the edges of the crowds, there were currents of people, checking out the food and souvenir vendors who had set up shop on the sidewalks. As we walked, chatted and people-watched, we realized that the crowds were becoming more and more packed. I started considering how many lives this man touched in his short lifetime.

In the week leading up to the beatification, I started reading Oscar Romero: Love Must Win Out by Kevin Clarke. I learned that Romero truly struggled to become the martyr that we remember. He fought against mental instabilities, politics within the church and his placement of service. It wasn’t until nearly three years before his death that he was shaken awake by the brutal killing of a dear friend and fellow priest into the warrior of truth and social justice that we remember and read about.

As we worked our way back to the sisters through the crowds that seemed to have tripled, I pushed my sunglasses on top of my head, batted my bright blue eyes and asked, “Excuse me, could we please pass through?” Despite the inconvenience, most were happy to lean to one side and give us a hand as we climbed through the walls of people.

We returned to our place with the sisters, only to realize that our previously excellent view was now blocked by a sea of umbrellas, repelling the increasingly powerful rays of the sun. That is, until the individual groups of people became one great voice:

Take down your umbrella! Bear the sun with grace so that we can all be witnesses to this event with our ears and our eyes.

To everyone’s amazement, it actually worked. To be frank, Central America is a culture of people who dislike the sun. If they anticipate the potential of being in a place without enough shade, they’ll bring their own. 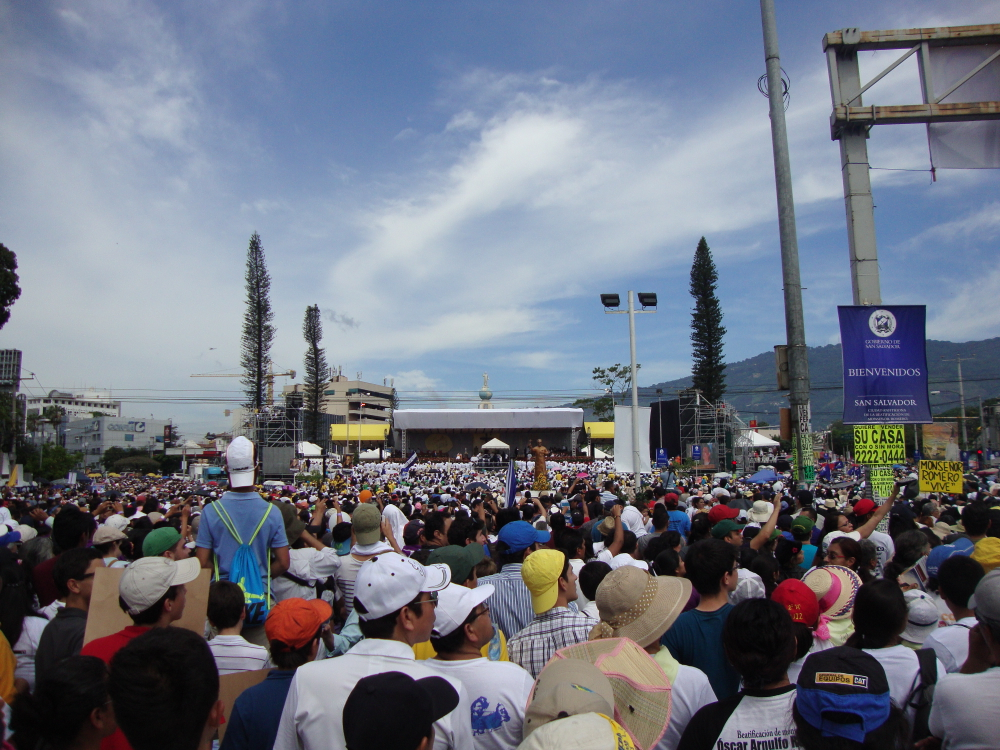 The view right after the call to put down the umbrellas was heard by all those in front of us. (Kirsten Rotz)

The moment all the umbrellas went down I was bowled over with a nearly inexplicable sensation that is a combination of wonderment, admiration and astonishment. To see and be acutely aware of the half a million people gathered, nearly shoulder-to-shoulder in solidarity to celebrate such a special Mass, tears came to my eyes as I realized how blessed I am.

I had the opportunity to be present at a very historic beatification. However, the celebration is over now. The martyrdom and beatification of Monseñor Romero offers each of us a new opportunity. We are called to go into the world and be agents of change. We don’t get to go about our daily lives with blinders on. Rather, we should be fighting to remove the blinders that we impose on ourselves and that are imposed on us. Romero saw that the status quo wasn’t going to work for him or the people he served, so he did something about it, knowing that he would be persecuted for preaching the gospel of the poor.

You have the opportunity to bless others.  How will you do it?

-Oscar Romero in a speech at Belgium’s University of Louvain

[Kirsten Rotz is participating in an internship with Global Sisters Report while volunteering in Honduras. She is a VIDES volunteer from Idaho who is serving with the Daughters of Mary Help of Christians (Salesian Sisters) in San Pedro Sula, Honduras. In addition to teaching English and PE in their school, she helps care for 30 girls who live with them during the week.]

The full circle of donations

From the inside looking out

Ascending to new heights in Honduras