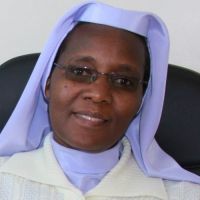 Adelaide Ndilu is a member of the Sisters of the Immaculate Heart of Mary in Kenya. After careers as teacher, administrator, and secretary, she studied mass communication. She now produces stories on church and justice topics for Radio Waumini, a Nairobi Catholic radio station.

Last year, Pope Francis issued a decree revising the rules for the traditional foot-washing ritual on Holy Thursday, saying the rite should no longer be limited to men and boys but also include women and girls. A rash of headlines was received with mixed reactions by the Catholic community across the globe. While some individual priests in Kenya long ago adapted the ritual of foot washing to women, others adamantly cling to tradition.

I come from a culture where witchcraft still reigns supreme. Witch doctors are highly consulted because, like in the rest of Africa, bad omens, such as accidents, diseases, poverty and death, don't just happen. Somebody is believed to have cast a spell on the victim and, therefore, witch doctors come in handy to unravel the hidden mystery.

Sr. Judith, 41, was one of four sisters killed in Yemen in March. Her first and last mission was at a nursing home in Yemen, where she worked with three sisters and other staff, mostly from Ethiopia.

Sr. Irene Stefani the first to be beatified in Kenya

Kenyans, hard pressed to define terms such as servant of God, canonization and sainthood, were full of wonder as they witnessed the first beatification in their country on May 23 in a Mass that attracted more than 100,000 people to the Dedan Kimathi University campus in Nyeri. Sr. Irene Stefani, an Italian nun known for walking long distances to minister to the sick, measured her journeys by how many rosaries she said on her way.