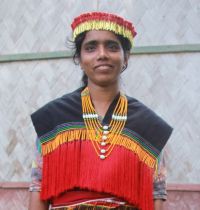 Janet Tellis is a member of the Missionary Sisters Servants of the Holy Spirit who has been working in northeastern India since 2008. A native of Udupi district of Karnataka, southern India, Tellis received her Ph.D. from Gauhati University of Assam state on March 30, 2015 with a focus on the Reang people, one of the 75 tribes facing extinction in India.

A cherished dream came true for me when I was appointed to work in India’s northeastern region after my final vows with the Missionary Sisters Servants of the Holy Spirit in 2005. Cultures have always fascinated me, and northeastern India, I was told, was a melting pot of races and cultures. I had expressed my desire to study anthropology while in the novitiate. My superiors must have kept that in mind while deciding postings for the newly professed members.