Sr. Linnet Antony is a trained musician in the Carnatic system. She is also a music teacher and a member of the Society of Kristu Dasis (Handmaids of Christ), an indigenous congregation founded in 1977 by Archbishop Emeritus Jacob Thoomkuzhy.

Antony has bachelor's and master's degrees in Carnatic music from the Chetana Sangeet Natya Academy and Music College, a center for training and research in performing arts in Thrissur, the cultural capital of the southern Indian state of Kerala. She joined the faculty at the institute in 2015 after she finished her studies.

Antony says she believes music nourishes the soul and leads humans to peace and tranquility. Music, she says, has the power to help people reach higher levels of self-awareness and experience God.

Antony: The Carnatic is part of India's classical music systems. It is popular in the southern Indian states of Andhra Pradesh Karnataka, Kerala and Tamil Nadu. The other system, Hindustani, is popular in northern India. Rooted in ancient Hindu traditions, the Carnatic music is based on different tunes and rhythms.

Learning Carnatic music helps one understand the scientific aspect of music and its various possibilities.

What made you learn music?

Our founder [Thoomkuzhy] and senior leaders of the congregation wanted one of the members to learn classical music. After a selection process, they chose me for it. I believe it was God's plan to make me learn music and become a singer and a music teacher.

Did you have interest in Carnatic music when you were young?

I was not keen on learning music systematically and scientifically in my childhood, although I enjoyed singing and listening to music. Music teachers in my school suggested that I learn music, but I didn't heed them. My two brothers were trained in music, and listening to them sing helped me learn some basic lessons in Carnatic music. This helped me when I finally made up my mind to take up music seriously at my congregation's request.

Could you tell us about your arangettam, your debut stage performance?

My arangettam [also known as arengetram] in 2011 was a three-hour concert. It was held at the auditorium of Chetana Sangeet Natya Academy, where I studied music. Present were our founder, my superior general and invitees. I wished my father were present, but he had passed away three years earlier. My mother also couldn't make it, as she was indisposed. One of my brothers and other family members were present, and that made me happy.

During the arangettam, I felt the divine presence of God in me. The occasion made me experience and realize that with God's blessings and grace, one can fulfill any difficult task in this life.

In how many concerts have you sung so far?

I have sung in 12 concerts. I have also sung in concerts organized by Christian TV channels, such as Shalom TV and Goodness TV in Kerala.

Do you have gurus who mentor you?

Yes, I have five gurus, including Fr. Paul Poovathinkal [of the Carmelite of Mary Immaculate congregation], founder and director of the Chetana Academy in Thrissur.

Are there more Catholic nuns who sing Carnatic music in India?

There are some who are trained in Carnatic music, but I have met only a couple of them who sing in concerts.

Are Christians taking interest in learning Carnatic music, which has roots in Hinduism?

There are many Christians who learn it. But many don't complete the course or, more importantly, don't want to pursue it as a profession because of the potential lack of financial security.

Have you composed music?

I have composed three songs, though music composition has not been a priority for me.

It's mainly due to lack of time. Teaching music takes most of my time because I am more focused on it now.

How does music help you in your faith and mission?

Music helps me come closer to God and feel and experience my creator's presence in my life. From my singing experiences, I can say that when I sing with devotion and with tune and rhythm, I am leading others also to God. Many who have heard my singing have told me this.

What made you become a religious woman?

Becoming a sister was my desire from childhood. My family background was happy and peaceful. My father was a prayerful person. He and my mother influenced my decision to become a sister. I believed that by joining a congregation, I could fulfill my desire to help the poor and protect the orphans. I am very particular that I should not disappoint anyone who comes to me for help. I took my first vows in 2001.

What did you do after your first profession?

The congregation assigned me to do parish work for the next three years. I enjoyed it because I was comfortable in visiting houses as well as sick people at home and in hospitals, teaching catechism and organizing parish-related works.

In 2004, I began to attend music classes. In 2008, I completed a four-year senior certificate in music. In the same year, I started classes for my bachelor's degree in music at the Chetana Music College. During that time, I also helped the elderly at an old-age home in Thrissur.

I had my arangettam after I completed my bachelor's degree. I began a master's in music in 2013. As soon as I completed the two-year course, I got the job as a music teacher at the college where I studied.

Even though I'm a trained Carnatic musician and a Carnatic music teacher, I prefer singing Christian devotional songs. I feel God makes me a tool to experience his love and care for others.

Could you tell us about your life before becoming a sister?

I was born and brought up in Kannur [in the northern part of Kerala]. My parish comes under the Syro-Malabar Archdiocese of Tellicherry. I am the eldest of three children. We were active in parish work. The three of us sang in the choir. We also took part in different music competitions and won prizes.

Family and individual prayers were an important part of our life that kept me closer to God. I wanted to become a nun after 10th grade. But my father insisted that I complete a two-year college course, which I did. After the course, I joined the congregation.

Where do you get your inspiration and motivation?

Two people have inspired and motivated me. One was my father, who instilled in me values and the beauty of prayer life. The other person was Mother Teresa of Kolkata. She is my role model.

Does your congregation support you as a musician?

What are your future plans as a musician?

I would like to compose Christian bhajans [devotional songs] for common people. I also want to put music to the verses of the Psalms in the Old Testament. 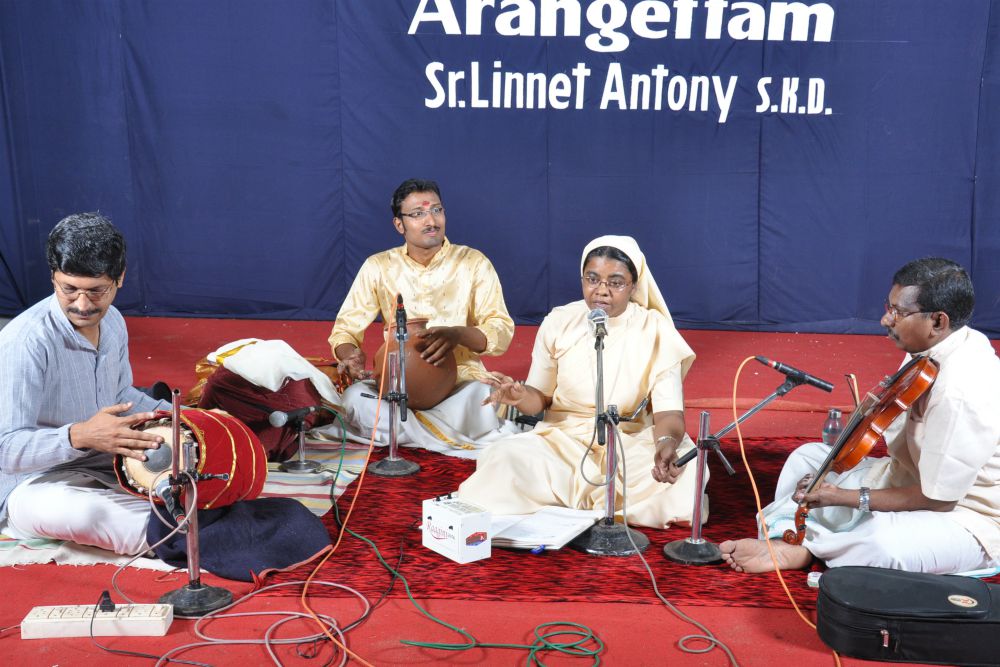 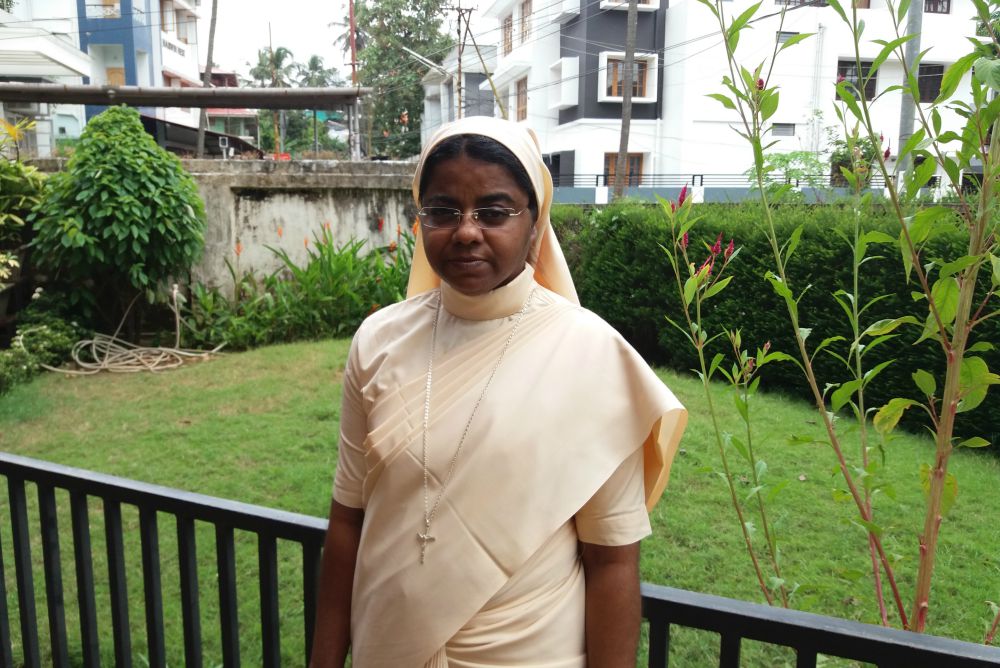 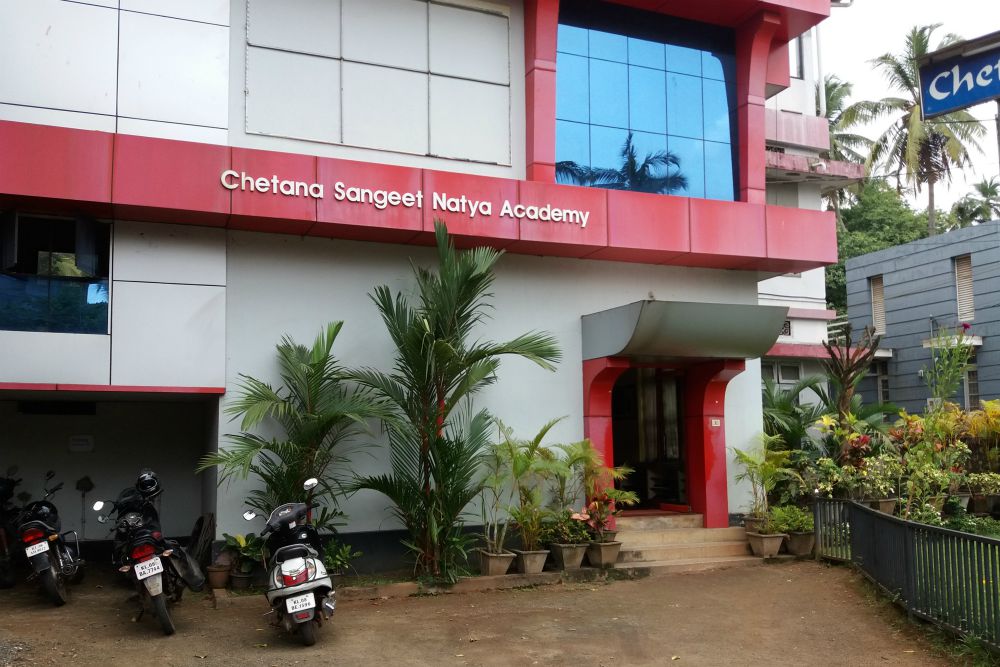