by Thomas C. Fox
This article appears in the Francis in Korea feature series. View the full series. 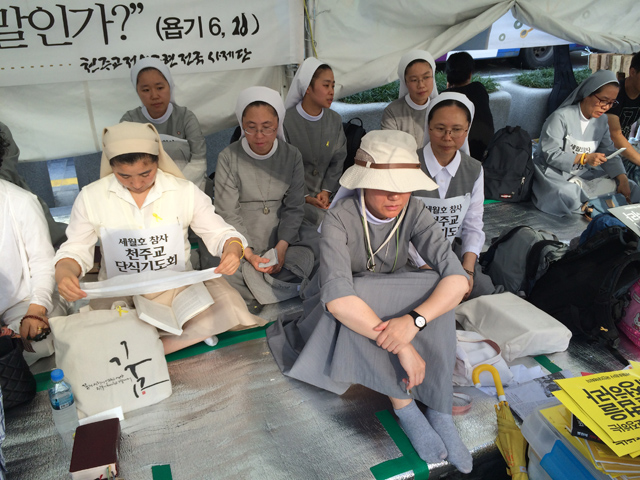 Women religious sit Tuesday with families of those who died in the April 16 sinking of a ferry to show support for an independent investigation of the disaster. The families have been protesting in the Seoul, South Korea, plaza where Pope Francis is to beatify 124 martyrs for 30 days. (NCR Photo/Thomas C. Fox)

Seoul, South Korea — When Pope Francis arrives here Thursday, he will encounter a vibrant but divided Korean church. It is a church that has grown substantially in numbers in recent decades, but one with significant internal divisions.

At the center of this division is how Korean Catholics should engage society and how Catholics should respond to the needs of the poor and the marginalized, especially those displaced by the rapid social and economic change that has occurred here in the past two decades.

The division between these groups has surfaced in recent months as planning for the papal trip has gone forward.