Tales from the garden: Sisters share stories of going vegetarian 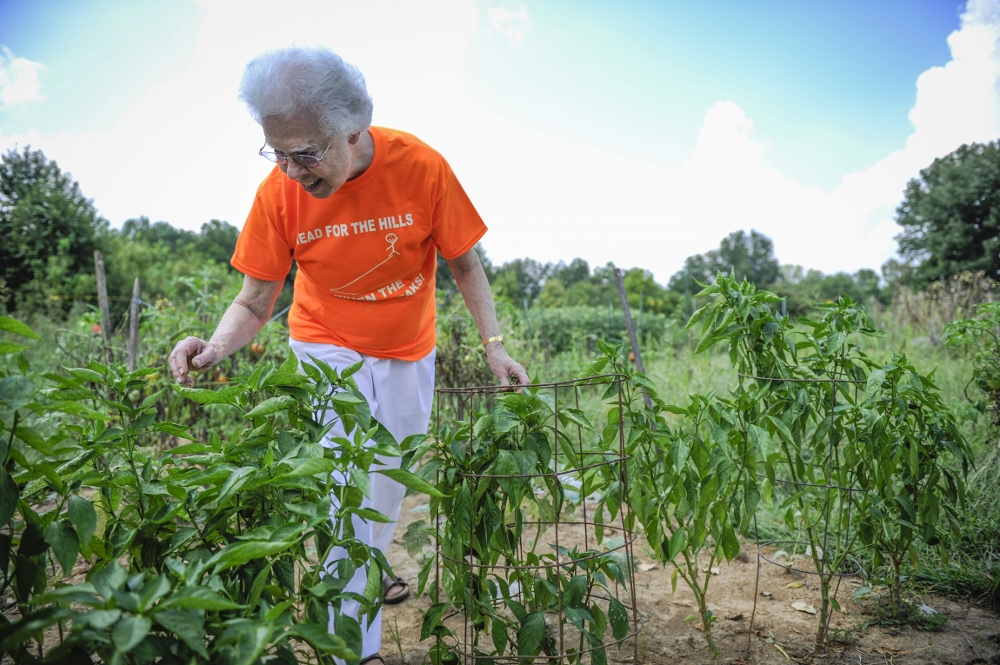 Sr. Rosemary Kirwin checks on her portion of the community garden on the property of the Sisters of Charity of Nazareth, Ky., Aug. 30, 2013. The congregation is one of the religious communities opposing the Bluegrass Pipeline. (CNS photo / Patrick Murphy-Racey)

Last month, I looked at the documentary “Cowspiracy: The Sustainability Secret.” Among its many disheartening statistics on the agriculture industry, the film also proposed a possible way out of the mess: eating lower on the food chain, for the sake of the animals, the planet and our health.

In other words, going vegan, or at least vegetarian.

According to a 2012 Gallup poll, 5 percent of American adults view themselves as vegetarian; 2 percent are vegan, eating no animal products at all. Making such a switch, or even limiting your meat consumption, can be a dramatic and difficult life adjustment.

Sr. Terry Mackenzie can attest to the struggle.

Now a seasoned vegetarian veteran, she gave up beef during the mid-1970s after learning about farms in other countries having to grow grain to feed U.S. cattle.

“It was very hard but I did it over three years,” said Mackenzie, who oversees the Ecospirituality Resources blog. The most difficult part, she told NCR, “was not eating beef in community without others feeling judged.” Making things a bit easier, her Society of Holy Child Jesus community in Chicago offers vegetarian options at its provincial meetings, and the eco-spirituality group never includes meat in their meals.

Mackenzie isn’t alone in her pursuit of a less meat-centric diet. So are other members of Sisters of Earth, an informal network of religious and lay women who are responding to ecological issues through healing and restoration work: from digging gardens and offsetting their carbon footprints, to revising their dietary choices.

“On weekends when we have retreats from Friday until Sunday we may have one meal with meat,” she said.

Since her 2011 arrival at the center – a ministry of the Congregation of the Humility of Mary – Storms has made it a goal for the sisters to eat and buy local and to grow much of their own food. They also raise all of their own organic vegetables from heirloom seeds, operate a greenhouse, and are in the process of setting up solar panels. Two years ago, the sisters published their own cookbook, Spirit of the Prairie; Catering to the Soul.

Storms became dedicated to espousing healthy food choices after her cancer diagnosis in 2001. In a January 2014 reflection at the center’s “A Nun’s Pocket” blog, Storms said that “[Food] tells a lot about your values. It’s a spiritual act because it connects you back to your soul.”

At another Midwestern congregation, the Carondelet St. Joseph Sisters Motherhouse in St. Louis, they serve meatless meals once a week and offer a daily vegetarian option. In addition, they have switched to cloth napkins, taken up composting and even grow their own fresh herbs, said Diana Oleskevich, justice coordinator.

What motivates Notre Dame School Sr. Paulette Zimmerman, also of St. Louis, to remain vegetarian after more than a decade is a desire to avoid complicity with the harm to animals that often occurs in factory farms. While she appreciates those who buy from small farmers who raise animals in a humane way, “At this point,” she said, “I’m trying to just not eat meat.”

For St. Joseph Sr. Susan Wilcox, director of the campus ministry office at St. Joseph College in New York, what kick-started her 15-year journey from “aspiring” to “active” vegetarian was the 2011 documentary “Vegucated.”

“I think the interesting thing in a non-supportive environment is the moral element of seeing the horrific factory farming images and the impacts (of raising beef) has on the climate that keeps me resolved,” she said.

Darvesha MacDonald, a supporter of the Sisters of Earth, empathizes with Wilcox and others with similar stories. The long-time Buddhist – a vegetarian for 30 years and a vegan for the past decade – recalls her own discomfort in seeing what occurs in factory farms, particularly films on dairy farming.

“I had to tie myself to a chair to force myself to watch some of the footage that is available, but that is what really stopped me from eating dairy,” said the Silver City, New Mexico, environmental activist and Dances of Universal Peace retreat leader.

While she doesn’t believe people must continuously watch such films, she advised that they “make the ‘unflinching gaze,’ as the Buddhists call it, at least long enough to know the terrible suffering they are supporting by purchasing dairy products.”

To help her stay true to her vegetarian ways, MacDonald has adopted an east-Indian cooking style – with vegetables sautéed in spicy oil – “so the smell of cooking fat does not tempt me at all. My meals are as satisfying as they can be.”

Zimmerman has found “there is no shortage of great recipes out there” for eating vegetarian. Since her initial plunge, MacKenzie, the Chicago-area sister, has gone another step by substituting vegetarian chicken for the real thing.

Occasionally, she will purchase organic beef from local farms, “but after so many years of not eating meat, even knowing it’s organic isn’t enough to make me eager to eat it.”

“Fortunately, I am happy eating simply,” she said.

[Sharon Abercrombie has covered the environment, spirituality, women’s issues, animal rights and social justice for many newspapers. She was assistant editor for EarthLight Magazine, the interfaith journal of eco-spirituality. She is a graduate of the Institute in Culture and Creation Spirituality at Holy Names University in Oakland, California.]

Why St. Hildegard's spirituality of 'viriditas' is extraordinary

Showing up for Mother Earth when so much seems hopeless