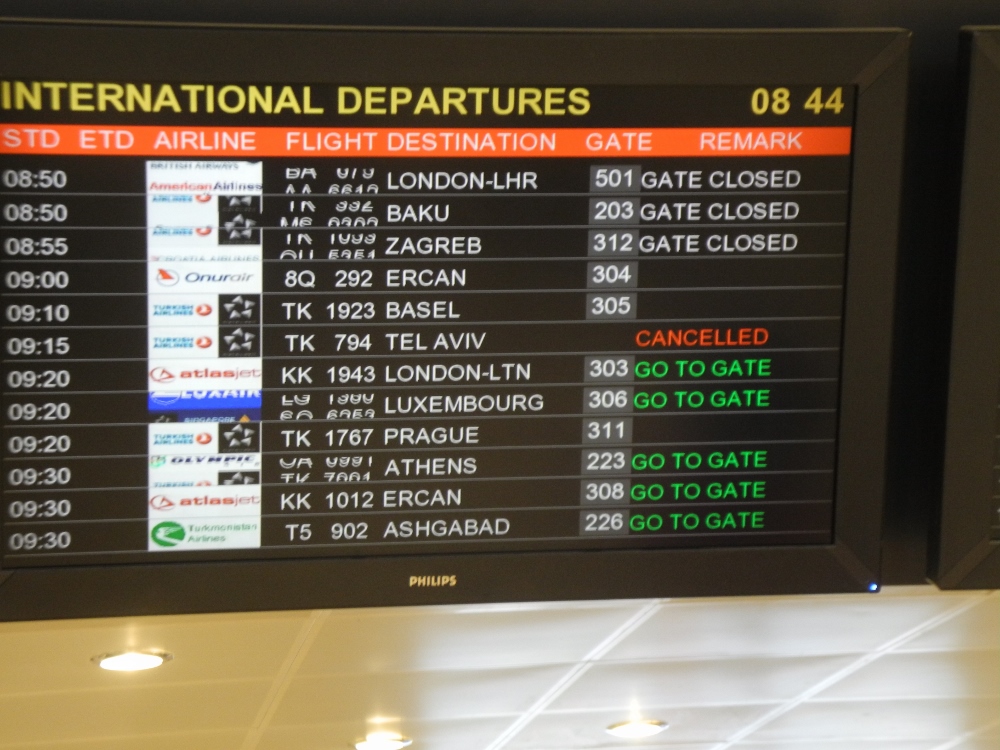 Tel Aviv, Israel — Call it a tour of the world's conflict hotspots.

When a Global Sisters Report journalist tries to get from Nigeria after writing about Boko Haram to her home in Israel – which is currently embroiled in a bitter war with Hamas – and Turkish Airlines has grounded all flights to Tel Aviv, what's the best way for her to get home? Fly through Ukraine, of course. After all, if there is one airline that might refuse to let missiles at the airport be deterrent, it should be Ukraine International Airlines, which is dealing with a threatening situation after separatists downed Malaysian flight MH17 last week.

My journey started on Tuesday. I was fresh off of a week in Nigeria, my first reporting trip for GSR. It was my first experience staying with and learning from sisters. My head was spinning from all of the new information piled on top of the crowded and colorful chaos of my first experience in Africa.

I got to the airport in Lagos after a two-hour crawl through traffic (the drive without traffic takes 15 minutes), and after more than a dozen security checkpoints, I made it to the check-in counter. This included military officials accusing me of smuggling antiquities out of the country – because the sisters had presented me with a beautiful wood carving.

Just five minutes before boarding my flight, a Turkish Airlines employee came up to inform me that all flights to Tel Aviv were canceled because, in his words, “The airport was bombed.”

Israel is a country surrounded by nations that are either at worst openly hostile or at best unfriendly. For people who live in Israel, the airport represents an important link to the outside world. Bombing the airport, or even closing it for a period of time, is more than just closing a building: It's isolating the country.

So when I heard the airport was shut down, I was floored. “Were people hurt? Is everyone ok?” He had no information.

Luckily another Israeli on the same flight cleared up the confusion: On Tuesday a rocket had landed in the town of Yehud, a suburb of Tel Aviv about one mile from the airport. American companies Delta and United were the first to cancel, hours ahead of a 24-hour Federal Aviation Administration ban on American flights to Israel.

I decided to continue on to Istanbul, stubbornly hoping that in the seven hours it took to fly to Istanbul from Lagos, things would clear up. But when I finally got off the plane, every other flight was green, but Tel Aviv was red: canceled.

Eventually I got sorted with a hotel room in Istanbul and the promise of a flight the next day. But when I showed up at the airport 24 hours later, no progress. Despite the fact that the FAA had lifted the flight ban and most companies had resumed flights to Israel, Turkish Airlines insisted the airport was closed to everyone. It was not. Turkish Airlines had no idea when their flights would resume and refused to pay for another night in a hotel.

And I wasn't alone: approximately 2,500 Israelis were stranded in Turkey this week. There were rumors that the Ministry of Foreign Affairs would organize charter flights from the Israeli company El Al to bring us home, but Israeli planes have not been allowed to land in Turkey since 2010, when relations between Israel and Turkey soured following the Mavi Marmara Gaza flotilla incident.

Plus, the Israelis I spoke to at the airport reasoned, the flights from El Al would be incredibly expensive since they had a captive audience. I checked at one of those last-minute flight counters at the airport that I associate as being only for criminals precipitously fleeing the country. There was one flight headed to Tel Aviv: Ukraine International Airlines, with a five-hour stopover in Odessa.

Ukraine did have a flight ban in the northeastern part of the country, near where Malaysian Airlines MH17 was shot down, but this flight, to the southern tip, was a go. One minute before the gate closed, praying it was the right decision, I threw my credit card down on the counter and was the last person on board.

After landing in Odessa, going there seemed to be the right choice. Turkish Airlines announced they had canceled their flights for the entire upcoming week, and Turkey still refused to allow Israeli planes to land.

When our UIA plane touched down on Israeli soil, the entire plane erupted in a huge cheer. After more than 85 hours of traveling, I collapsed in my bed at home in Tel Aviv at 2:30 a.m. on Friday, grateful the saga was over at last. The story ended well for the rest of the Israelis too: In the end, the Foreign Ministry absorbed the cost of their El Al charter flight, and almost everyone was back by Friday afternoon, in time for the Jewish Sabbath.

I am so grateful to have been in Nigeria, so inspired by the sisters’ hard work and the amazing things they are doing in that country, and I am honored to be able to share their stories with the world through Global Sisters Report.

Even with such a long journey home, I'd do it all over in a heartbeat.

Just next time, I'll bring my ruby red slippers. That way when it's time to leave, all I have to do is click my heels three times and whisper, “There's no place like home.”

Behold the place: Sisters teach Catholicism from Jewish perspective in heart of Jerusalem