Cycling with the sisters to Niagara Falls

• Learn more about why they did it: Cycling With Sisters to promote social justice work for 100 miles

• Benedictine Sr. Linda Romey writes about preparations for the Cycling With Sisters ride in her column "Are religious women needed?" 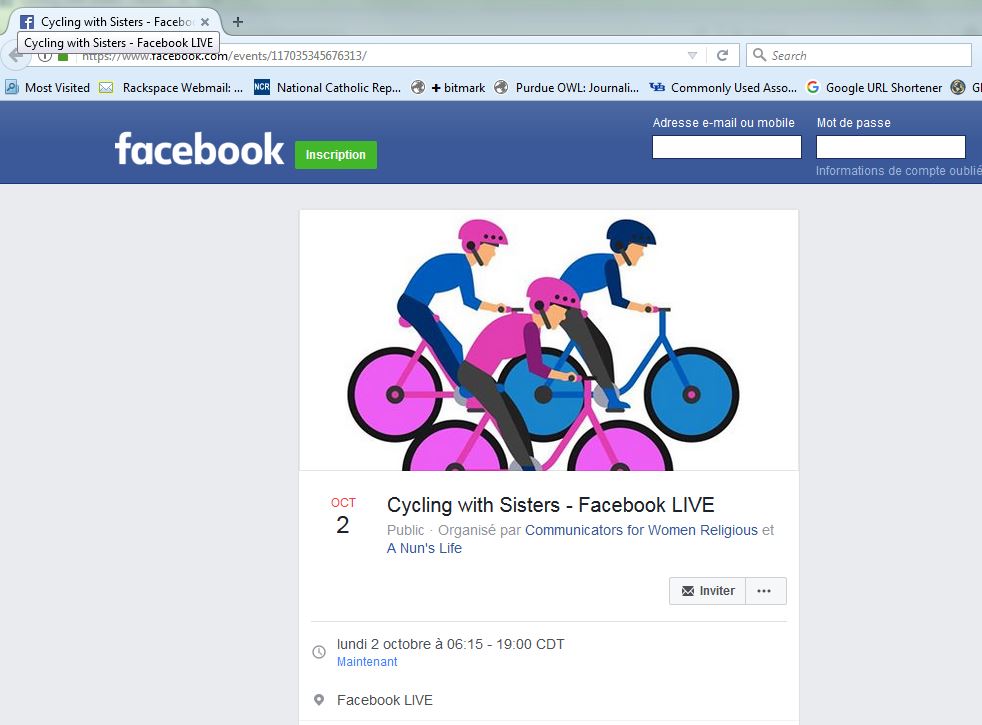 Up to 20 people, including at least five sisters, biked 100 miles Oct. 2 from just east of Erie, Pennsylvania, to Niagara Falls, Ontario, for the Communicators for Women Religious annual conference Oct. 3-6 there.

The ride, Cycling With Sisters, was meant to draw attention to the social justice work of women religious. Each of the five stops along the route focused on a different aspect of social justice in areas of concern for sisters across the United States: human trafficking, poverty, nonviolence, the environment, and immigration.

The one-day, 100-mile ride — what cycling enthusiasts call a "century" — followed a scenic route along the shore of Lake Erie through Buffalo, New York, where they crossed the border into Canada then continued along the shore of the Niagara River to the falls.

Immaculate Heart of Mary Sr. Maxine Kollasch, co-founder of A Nun's Life Ministry, was with the group to livestream the ride to a live Facebook event and cycled part of the route. Global Sisters Report live-blogged the event with periodic updates throughout the day.

The Cycling With Sisters team has finished their one-day, 100-mile quest to ride bicycles from Erie, Pennsylvania, to Niagara Falls, Ontario.

The group rolled into the Table Rock Welcome Center about 6:30 p.m. EDT, about 11-and-a-half hours after they began. Along the way, they traced the southern shore of Lake Erie, crossed the Peace Bridge at Buffalo, New York, into Canada, then followed the Niagara River north to their destination.

On Oct. 3, they will attend the Communicators for Women Religious annual conference, which runs through Oct. 6.

The fifth stop on the ride was in Buffalo, where the group reflected on and prayed for immigrants and immigration reform, saying a prayer by Benedictine Sr. Joan Chittister.

The group then crossed into Canada and rode the final 20 miles to Niagara Falls, where they were greeted by Communicators for Women Religious board members and friends.

Kollasch said their arrival caused a commotion, drawing tourists from the falls to see what was happening and spreading the sisters' message of social justice even further.

"It was a very prayerful ride," Kollasch said. "Some of the riders said that getting off the bike and praying really centered us, gave us that energy to keep going. It was like riding with the world."

Kollasch said the ride proved exercise and spirituality can go together.

"People may not put 'prayerful' and 'biking' together often, but they really go together well," she said.

The ride was organized by Stephanie Hall, director of communications and public relations for the Sisters of St. Joseph of Northwestern Pennsylvania, and Sr. Linda Romey, a Benedictine Sister of Erie. Romey is her community's web developer/designer and does marketing for Monasteries of the Heart, Benetvision and the Erie Benedictines. Both Hall and Romey are on the Communicators for Women Religious board.

The riders were escorted and supported by a crew from Lake Country Bike in North East, Pennsylvania, where the ride started.

Kollasch said "word is circulating" about doing a similar ride for next year's conference.

"It was a great way to elevate the need for social justice in the world," she said.

The Cycling With Sisters crew has completed stops three and four and can see the end of the journey.

Stop No. 3 focused on nonviolence and an end to hatred and racism, and after the reflections and prayers, the group ate a quick lunch.

While it is true that on rides like these, cyclists burn hundreds and even thousands of calories and at least some of those need to be replaced during the day to keep energy up, they also cannot pedal a bike (or do any strenuous exercise, for that matter) with a stomach full of heavy food. So meals tend to be lighter, easy-to-digest, high-calorie food, such as sandwiches, cookies and bananas. Riders will also often carry sugar-rich snacks in a pocket in case they need a boost between stops.

Sr. Maxine Kollasch said that unlike many cycling groups, with this one, there are songs to keep you going.

"It starts to wear on a person, but that's when you start the group singing," she said. "People are just so geeked, and when you have that kind of spirit on a ride, it makes the miles fly by."

Kollasch is following the group to keep the social media account updated but will join the group and ride the last leg of the trip.

The fourth stop focused on the environment and concluded with "A Prayer for Our Earth" by Pope Francis, which includes the lines, "Bring healing to our lives, that we may protect the world and not prey on it, that we may sow beauty, not pollution."

The last stop will be in Buffalo, New York, just before the riders cross the Peace Bridge into Ontario, Canada, where they will complete the last 20 miles heading north along the west shore of the Niagara River to the Table Rock Welcome Center at Niagara Falls.

The Cycling With Sisters crew is still pedaling along, having made their second stop on the 100-mile journey.

The second stop focused on the fight against poverty, whether it is in the form of hunger, homelessness, lack of health care or unemployment. The group cited the work by the Congregation de Notre-Dame; the Sisters of Charity of Leavenworth, Kansas; the Sisters of the Presentation of the Blessed Virgin Mary; the Sisters of Mercy of the Americas; and the Sisters of St. Joseph of Northwestern Pennsylvania.

The prayer was not just to end poverty, but for understanding and true empathy, and was shared by the Sisters of the Presentation of the Blessed Virgin Mary, Dubuque, Iowa:

Teach me to understand, Lord.
Teach me what it is to be thirsty
hungry
fearful
lonely
sick
imprisoned.

The prayer fits perfectly with the ride's mantra, by Benedictine Sisters of Erie Sr. Mary Lou Kownacki: "Open wide my arms that the suffering of the world may come in."

The chilly temperatures at the start of the ride are likely forgotten now, as the temperature has risen to 62 degrees Fahrenheit, though many of the riders at the second stop were still sporting their matching, long-sleeved Communicators for Women Religious shirts in high-vis pink.

IMPORTANT NOTE: For those following the ride on social media, posts were supposed to be appearing on a Facebook live event page but instead have been appearing on the Communicators for Women Religious page. There you can find updates, photos and a few short videos.

Sr. Maxine Kollasch of the Sisters, Servants of the Immaculate Heart of Mary, co-founder of A Nun's Life Ministry, just checked in after the group's first stop.

She said the group was about 16 miles into the ride when it stopped to pray for an end to human trafficking. They spoke for a few minutes about the work by the Sisters of St. Joseph of Toronto; the Ursuline Sisters of Mount St. Joseph in Maple Mount, Kentucky; the Sisters of Charity of Seton Hill; and the Sisters of the Most Precious Blood of O'Fallon, Missouri.

The prayer was one shared by the Sisters of Charity of St. Elizabeth in Convent Station, New Jersey, which closes with:

Hasten the coming of the day when all people
and our precious Earth itself
will be treated, not as a commodity,
but as radiant images of your freedom, beauty and truth.
Amen.

Kollasch said everyone is bundled up against the chill, but the temperature is beginning to rise with the sun. The group was sent on its way with a prayer and a blessing from the Benedictine Sisters of Erie, which also hosted the group Sunday night.

"We've got a heck of a good support crew, and everybody's in high spirits," Kollasch said, noting there have not yet been any problems to report. "So far so good. All the prayers are working."

A short video of the group milling about in the dark just before the ride is available on Twitter.

The Facebook Live event began at 6:15 a.m., but we haven't had an update from the ride yet. However, we can tell you a few things already: The temperature in Erie, Pennsylvania, is currently 49 degrees Fahrenheit with winds from the south-southeast at 7 mph.

They'll be riding northeast, which means they'll have a slight cross-wind, but more importantly, there will be a wind chill. Forty-nine degrees may not sound very chilly, but add another 10 to 15 mph from the speed of the bike, and that 7 mph wind is now up to a 22 mph wind, which would make the temperature feel like 42 degrees.

Experienced riders say those heading out will want longer riding pants rather than the customary shorts, either a long-sleeved jersey or a short-sleeved jersey with removable arm warmers, and a headband or hat to cover their ears.

And the chill won't last long: By noon, the forecast says the temperature will be 68 degrees, heading for a high of 73 degrees. It should be sunny or mostly sunny all day.

Check back with Global Sisters Report as the day progresses for more dispatch from Cycling With Sisters, and read more about the bike ride.

Cycling with the sisters to Niagara Falls