by Dawn Araujo-Hawkins
This article appears in the Iraq feature series. View the full series. 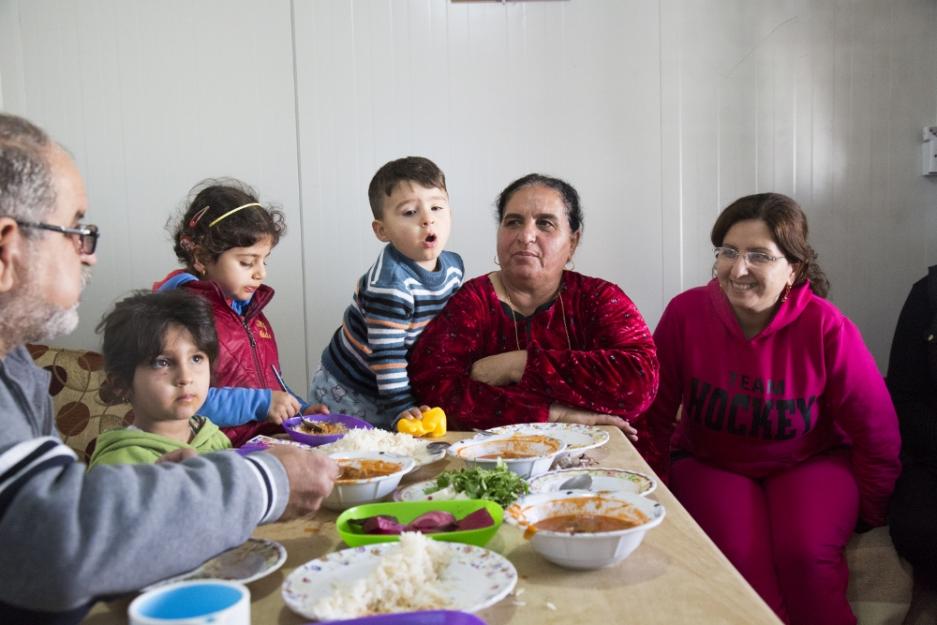 Habiba Daud, second from right, and her family have lunch Dec. 16, 2015, in their trailer at Ashti 2, a camp for internally displaced people in Irbil. The family is from a predominantly Christian town in northern Iraq that was overun by the Islamic State group in August 2014. (CNS photo / Oscar Durand)

Nearly two years ago, the Dominican Sisters of St. Catherine of Siena, fleeing the so-called Islamic State group, left their hometown of Mosul and relocated to Iraqi Kurdistan. Global Sisters Report has been following the sisters ever since in an attempt to keep you, our readers, up-to-date on this important aspect of the ISIS story.

I’ve written a number of updates (you can read the latest here), and GSR has also featured columns from three Dominican sisters who visited the makeshift camps where the Iraqi sisters currently minister. Last Thursday, Sr. Maria Hanna — the Iraqi sister’s prioress — penned a 2015 year-end recap, which seems appropriate to highlight here:

With the New Year greetings, I extend my gratitude for your continuous support and prayers. Also, I would like to share with you our highlights from 2015.

Thanks to the blessed efforts of people who are accompanying us, we have had an eventful year. In addition to accompanying the Internally Displaced Persons (IDPs) at the camps, sisters were able to prepare 400 children for First Communion in ten groups in different cities and towns in the region of Kurdistan.

We are grateful to the Lord that our efforts to open a primary school were fruitful. Eventually, we managed to get all the licenses needed from the Iraqi and Kurdish governments. Bishop Wada (the Chaldean Bishop of Erbil) offered us a building that Catholic organizations built on property belonging to the Archdiocese of Erbil, and the Pontifical Mission furnished it thankfully. There are about 460 pupils — girls and boys — and all are IDPs. Seven of our Dominican sisters are working at the school, with other teachers and administrators, also IDPs. Studying at our school is free. The salaries of teachers and staff (about $18,000 a month) have been granted by the Pontifical Mission for this year. People are thankful and happy for this project, as the condition of other schools is really miserable. Because of the large number of IDPs, some schools have three shifts a day, each shift for different groups, and the number of pupils in a class could number more than 80.

In both projects, school and kindergarten, sisters have been noticing much improvement in children’s behavior. They are more willing to listen to their teachers and it is easier for teachers to discipline the children. The schools are equipped with [a] playground and a sport field, which gave the children a suitable environment to play and direct their energy.

Everybody is physically and psychologically exhausted. It does not seem that there is any solution. People risk their lives. Immigration is increasing in all directions. Just before the end of the year, families of 167 persons were placed in Slovakia (at once) as part of immigration program [sic], and there are more to go in the coming month. That, of course, shook the confidence of people about the future of Christianity in Iraq. Add to that, there are other families who are leaving the country to the neighboring [countries] like Lebanon, Jordan and Turkey. In a matter of three months the number of children in our school lowered down from 520 to 460; also about 15 children from the kindergarten left with their families and more are planning to leave.

Although we are sad to see people leave, people who are living in prefabricated houses are facing [a] tremendously hard time, [e]specially now in winter as these houses (caravans} are not healthy at all — they are not made to comprise large families, neither are they equipped to such harsh weather. They are extremely cold in winter, extremely hot in summer.

The recent news about the policy in the Middle East is not encouraging at all, [neither] is there anything promising. Everything is unknown and uncertain. Therefore, it is not surprising to see people leave. We pray that the doors of divine mercy may open for our brothers and sister that they may find people who could welcome them. As for us, we remain with the remnant here, to support the people intellectually and spiritually through educational projects and liturgical meetings.

Within the community, we are thankful for all those [who] helped us purchase a house, which provided a better environment for our young sisters in [the] formation program. We have started preparing for our general chapter that is planned to be held in July 2016.

We ask your prayers that God may enlighten us and grant us His wisdom to discern in our reality despite all the difficulties and pressure we are living.

Editor's note: An earlier version of this article stated that all three Dominican sisters traveling from the United States to Iraq were Adrian Dominicans. However, one of the sisters is a Dominican from Springfield, Illinois, and the article has been edited to reflect this fact.