In the middle of makeshift refugee camps, the Dominican Sisters of St. Catherine of Siena are trying to make life work.

They get up every morning for prayer, and then they spend the rest of the day visiting the thousands of Iraqi refugees living in the abandoned malls and unfinished construction sites of Erbil, the capital of Iraqi Kurdistan. The sisters would like to open schools for the children, but for now they’re making do with a Montessori kindergarten that’s run out of an apartment.

As the sisters move about the camps, people clamor to touch them. After all, they have become the visible church for deeply spiritual people who have lost everything – at least that’s how Jersey City-based Dominican Sr. Arlene Flaherty sees it. Flaherty visited the camps last month as part of a three-woman delegation of U.S. Dominicans, evidence of a transnational relationship forged almost two decades ago in the aftermath during the Gulf War.

The Iraqi sisters have endured a lot. The first Iraqi nationals joined the community in 1877, and theirs is the first congregation of Catholic women religious in modern Iraq. They’ve stayed committed to their homeland throughout its embattled history, refusing to leave Iraq during the Gulf War in 1990 and again during the U.S.-led invasion of Iraq. Even when a missile hit and damaged their motherhouse in 2003, they stayed. The sisters intended to outlast ISIS, too, but like tens of thousands of others, they were ultimately forced to flee north to Iraqi Kurdistan.

ISIS came seemingly from nowhere, but of course that wasn’t really the case. Everyone comes from somewhere, and the Islamist terrorist group suddenly dominating last summer’s headlines – we would later learn – had sprung from the ravaged, sectarian soil of post-invasion Iraq.

Highly organized, well-armed and well-funded, ISIS introduced itself to most of the world in June 2014 via a series of high-profile attacks – first violently seizing control of Mosul, Iraq’s second-largest city, and then capturing nearby Qaraqosh, where many of Mosul’s refugees had fled. Christians, who were plentiful in both cities, were told to leave, convert or die, and gruesome tales of Christians being raped and beheaded began to populate the Internet.

Although they got most of the international attention, Christians weren’t the only targets. Religious and ethnic minorities of all kinds were singled out as ISIS – also known as ISIL, Daesh or the Islamic State – blazed a bloody path to international notoriety. What they wanted, the militants said, was to establish their version of an Islamic state – a caliphate – in Iraq, which would tolerate no Christians, no Yazidis and no Shiite Muslims, save those women and girls forcibly converted and sold as sex slaves.

By the end of 2014 ISIS would have its self-proclaimed caliphate, and it would control what the Wall Street Journal estimated was a Belgium-sized chunk of Iraq and Syria. Meanwhile, Iraq’s historically Christian regions have been depleted and some defense experts have admitted they aren’t sure how to handle ISIS’s particular brand of terror.

The Christian refugees aren’t safe in northern Iraq. Just during the nine days the U.S. delegation was there, Flaherty said ISIS made two attempts to move into Erbil. But even if ISIS weren’t close by, the living conditions in the camps are threat enough. Refugees who don’t live in the malls or construction sites live in cramped, uninsulated aluminum boxes. Access to water is spotty, and heat for the chilly northern nights is rare.

“The situation in Kurdistan is temporary with a capital ‘T’ and unsafe with a capital ‘U,’” said Sr. Dusty Farnan, a Dominican sister from Adrian, Michigan, who was part of the delegation with Flaherty. “The overall feeling is one of severe depression and profound loss. One of the sisters said, ‘When I look at the people, it’s not the same faces anymore.’ So it’s profound, profound sadness.”

Flaherty concurs, stating that in her 30 years of working with refugees, the conditions in Erbil are the worst she’s ever seen.

“I’ve seen some things in my life, believe me,” she said in a Skype conversation while she was still in the region. “I’ve lived in the Caribbean, I was in Haiti, I have been and Syria and Damascus looking at other refugee situations, and I have never seen anything like this. I am blown away.”

Flaherty says she doesn’t cry easily, but she was moved to tears in Erbil – not just because of what she witnessed in the camps, but also because of what she sees as her country’s past and present collusion in creating the political atmosphere that created the current situation. ISIS may have finally driven the Christians out of their homes, she said, but 2014 wasn’t the start of their suffering.

The 2003 invasion decimated Iraqi infrastructure and services, many of which have not been adequately repaired. Even the Iraqi Dominicans, who used to run schools, hospitals and orphanages in and around Mosul, were forced to close most of their institutions when the Iraq War began. Furthermore, when Saddam Hussein’s regime was toppled, it created a power vacuum that was left largely unchecked, launching a civil war and allowing for al-Qaida – the group where ISIS has its genesis – to gain a foothold in Iraq for the first time.

“It’s been a series of losses for the Iraqi people – and for the Christian people in Iraq – since the war began,” Flaherty said. “The disruption of life there, the chaos in the region, the upending of this society – we have a relationship to that, so do we not have a responsibility here?”

That sense of relationship to and responsibility for Iraq runs deep in the U.S. Dominicans. They met their Iraqi sisters for the first time in 1999 – back when there was a United Nations-imposed travel ban on Iraq.

“Only sisters and brothers, you know, can take these risks,” Farnan said of that first trip, “and these things are not without consequences. But it seems to me, the biggest consequence was the solidary of knowing that you’re sister and brother with your family in Iraq.”

That same year, Dominicans in the U.S. and Canada launched the Iraq Coordinating Committee, a joint-effort of the Dominican Leadership Conference and the North American Promoters of Justice, Peace and Care of Creation. The committee advocated for peace and humanitarian aid as economic sanctions slowly crushed the Iraqi people and as war forced the Iraqi sisters to close almost all of the schools and hospitals they had run since 1877.

The committee disbanded in 2008, when President George W. Bush signed an agreement setting an end-date for U.S. troop presence in Iraq, but it was reinstated this summer as Iraqi sisters began sending updates to sisters in the U.S. about ISIS.

“In June, I was on a retreat, and I started getting these texts that they had to leave,” said Farnan, who chaired the Iraq Coordinating Committee from 2002 to 2008. “They didn't know for how long – and in June it was only for three days, and then they returned.”

But as the months progressed and the situation worsened, the resurrected Iraq Coordinating Committee decided to send a delegation to Erbil in January to visit the sisters and the other refugees. They were hearing a lot in the U.S., Farnan said, but they weren’t seeing anything. So three sisters went: Farnan, Flaherty and Marcelline Koch, who is currently the North American co-promoter of justice and peace for Dominican Sisters International.

They spent nine days in Iraqi Kurdistan and Jordan, helping the Iraqi sisters with their ministries and gathering information for their peace advocacy work back at home. They were in Erbil when a gunman allegedly claiming sympathies with ISIS took hostages in a kosher market in Paris. The attack didn’t go unnoticed in Erbil.

“The sisters were saying it’s so insane how extensive the reach of this organization is and how its m.o. in the world is to terrorize,” Flaherty said. “They are able to go from one community to another and say, ‘We can terrorize you. We can scare the hell out of you if we want to.’ And sometimes, just that strategy – that threat alone – is even psychologically much more powerful than the presence of somebody with a gun in front of you.”

But the Iraqi sisters are carrying on, Flaherty said, doing whatever they can to provide spiritual and physical comfort for the other refugees, though it’s difficult given the conditions.

“These are women who are committed to helping to shape their culture and their community, helping to contribute to Iraq by educating Iraqi children,” she said. “They don't just educate Catholic children, they educate Muslims and Christians. And they've done that throughout their whole lives, and they're some of the best educators in this country. Now they're in a situation where they have the skill, the experience, the licensing, everything that they need – and for the first time in their lives, they can't give it. And they see the need.”

Recently, Flaherty said, the U.S. consulate in Iraq told the sisters they would need to raise funds through private donors if they wanted to get anything done in the refugee camps. The Iraqi government hasn’t provided support for the refugees, the Kurdish government either can’t or won’t and the United States has yet to grant them actual refugee status.

It’s a desperate and oppressive situation, Farnan said, but it isn’t without a glimmer of hope.

“I’ve never seen such incredibly deep faith,” she said of the refugees. “I think they have some kind of DNA cell that just says, ‘When all else fails, my faith will be there.’”

They pack hundreds-deep into the malls every Sunday for Mass, singing without hymnals because they know every word by heart. Farnan said that even in their makeshift homes, they display religious pictures and icons.

“There’s no way of separating them from their faith,” she said, “and that is what gives them some hope.” 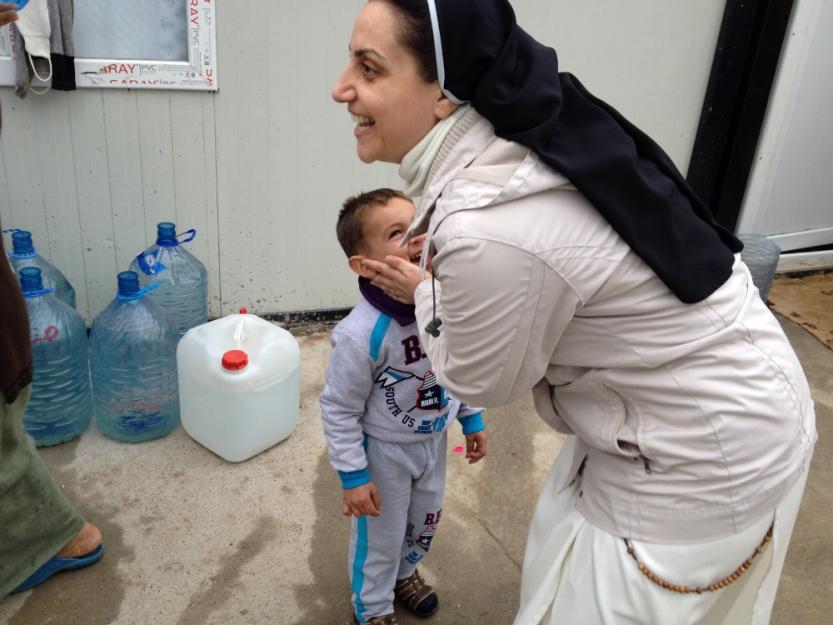 Dominican Sr. Ban hugs one of her students. (Courtesy of Dominican sisters) 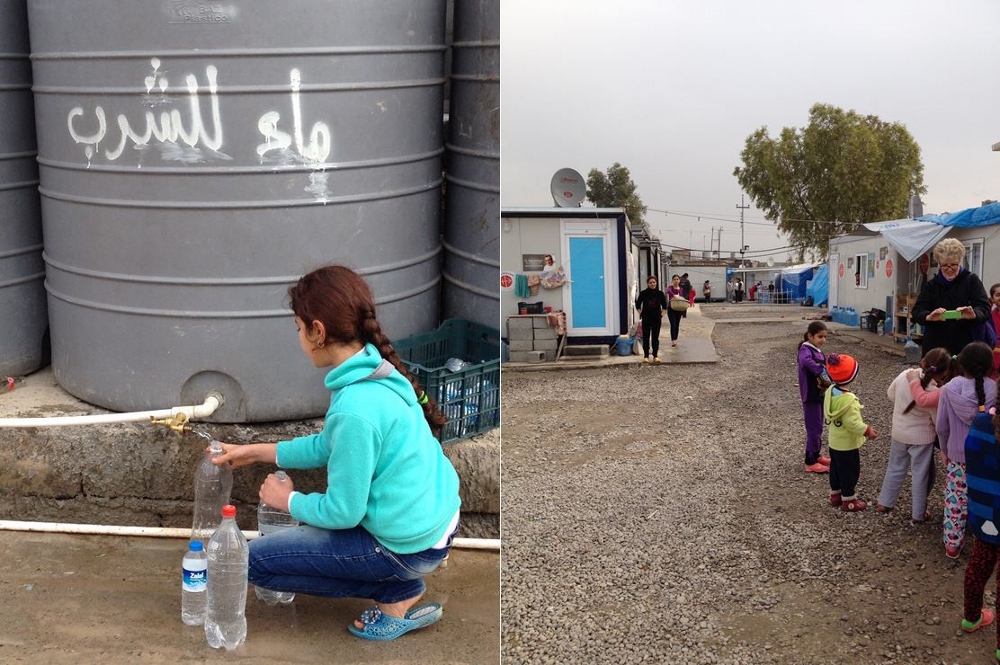 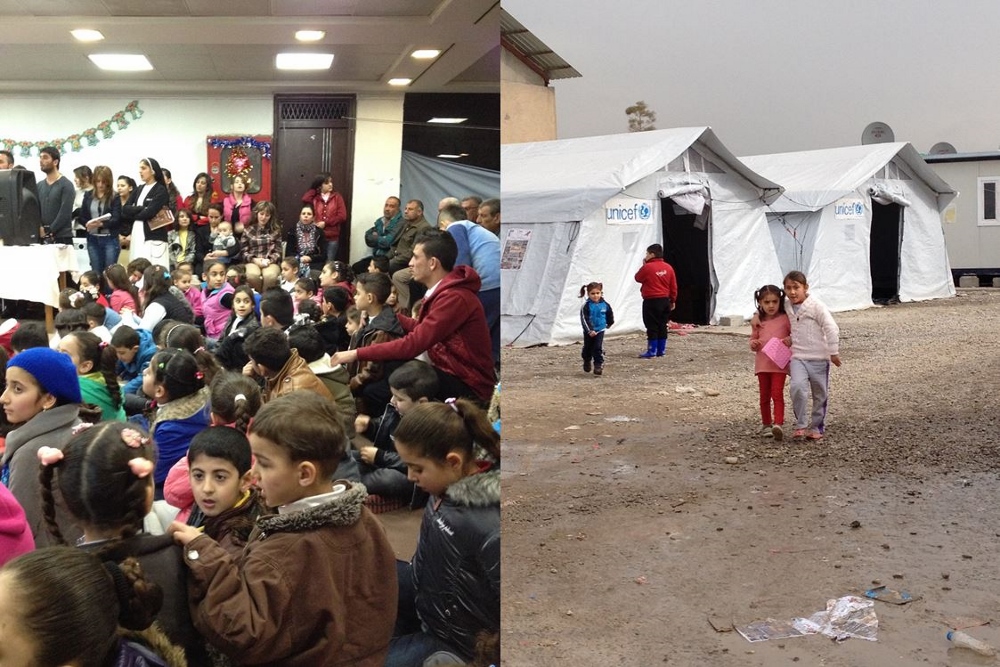 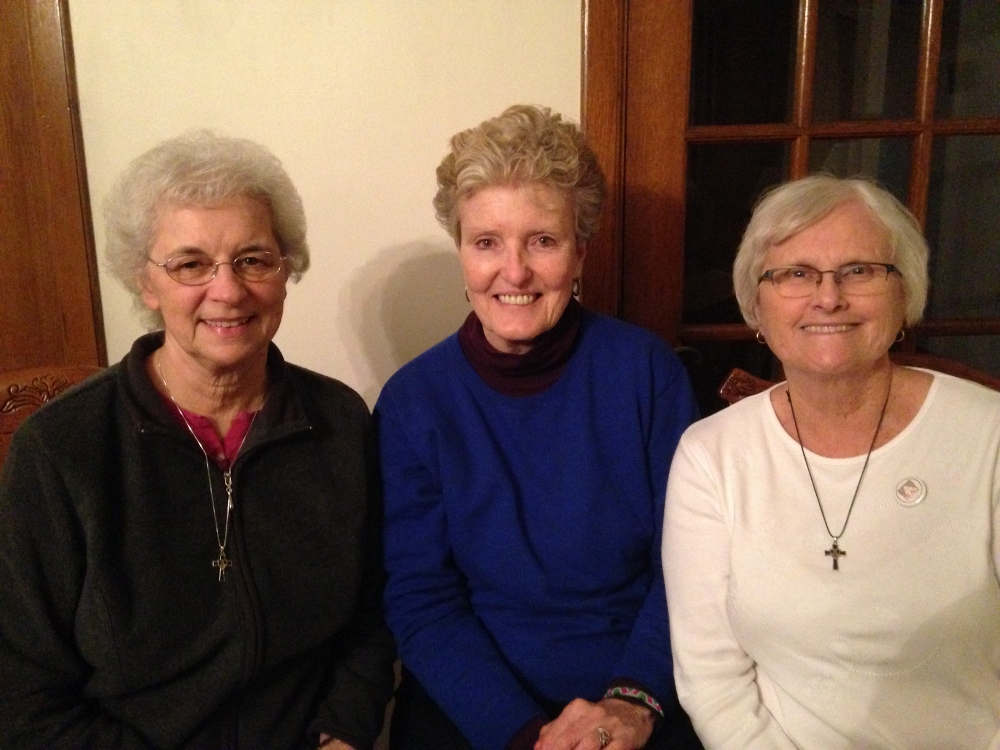 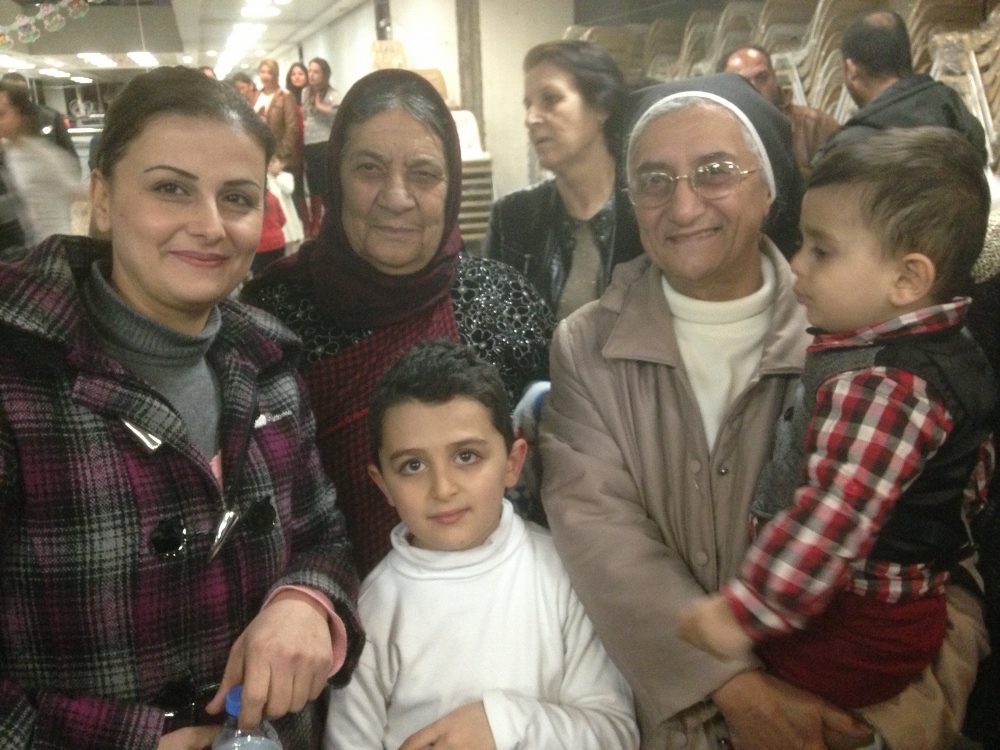 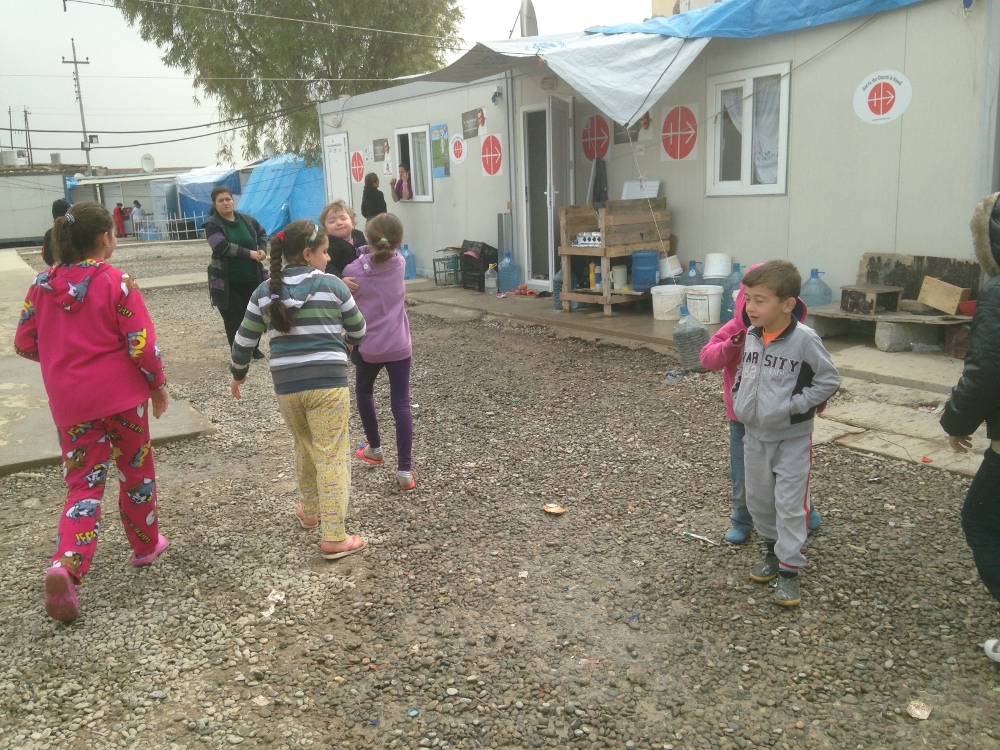 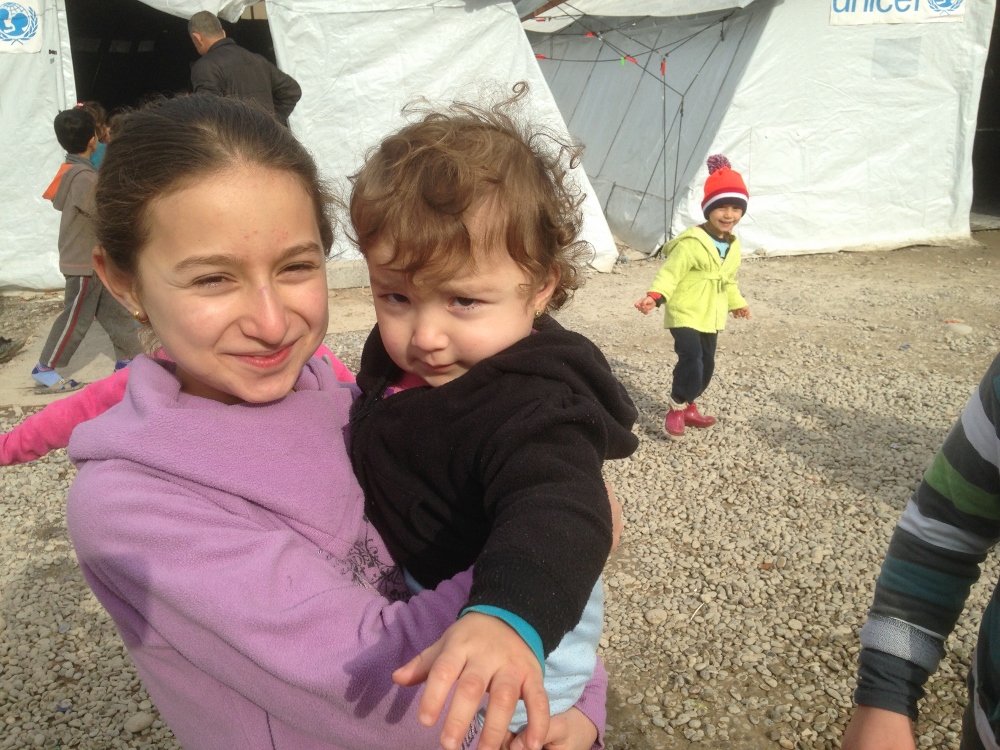 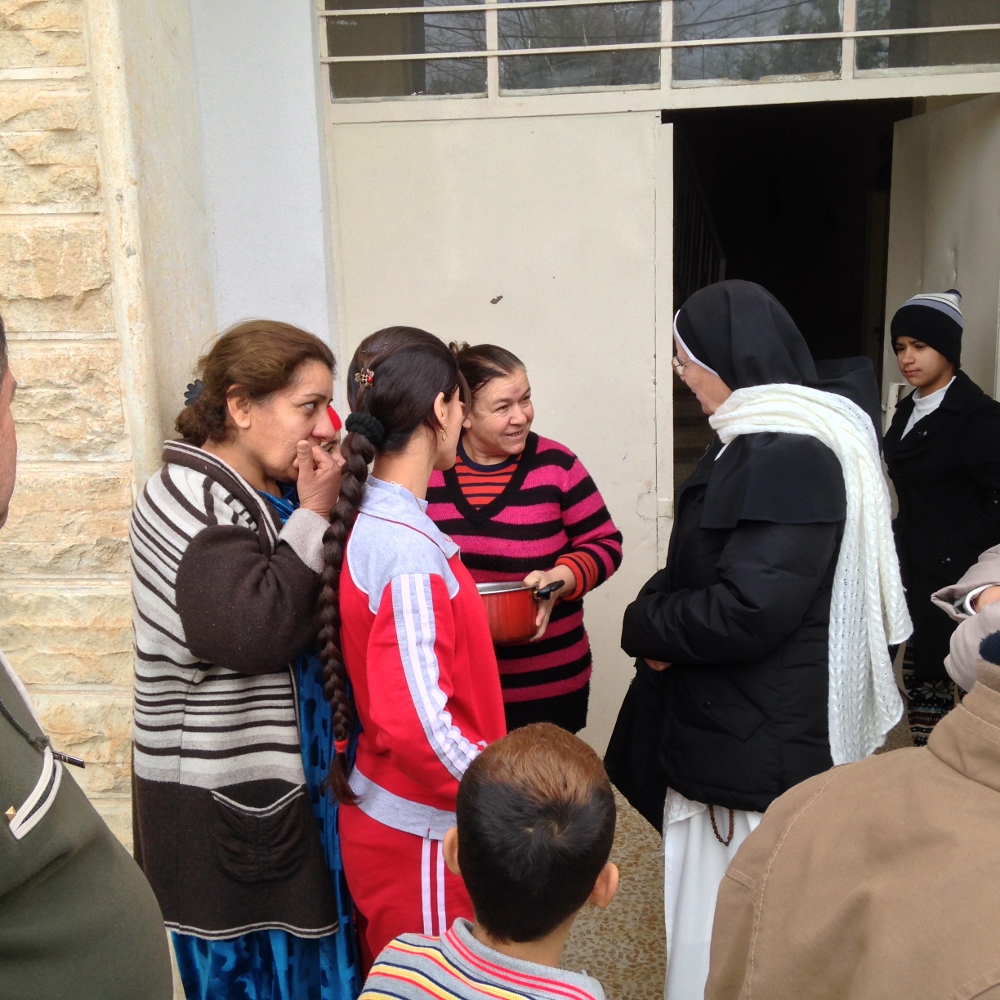 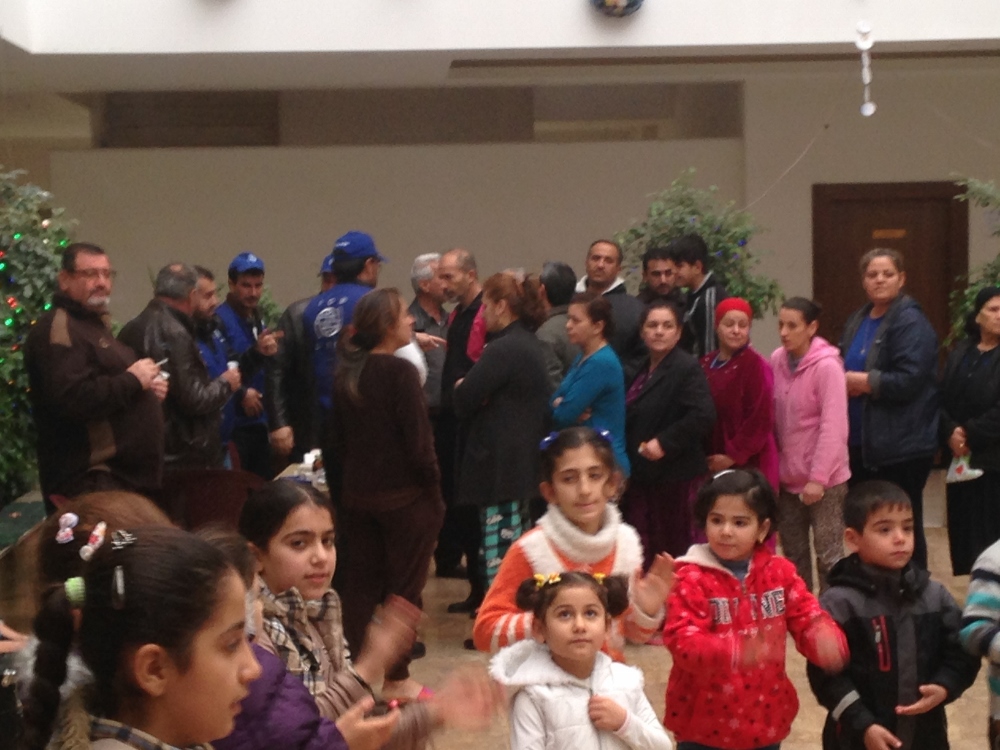