One thing I love about my work at Global Sisters Report is meeting sisters who live and minister on the margins. Their invisibility, vulnerability and marginality struck me forcefully on a recent visit to Fiji to visit friends.

I was so fortunate to meet sisters, priests, brothers and lay ministers who live and work with small communities on tiny islands and atolls in the middle of the Pacific Ocean. They frequently work without electricity or technology and many other advantages most of us take for granted. They are definitely on the margins, and their stories dramatically shifted my consciousness about how I perceive the world.

My ignorance was even more apparent when I saw maps outlining the borders of these sea countries, far beyond the small images of land that usually identify them. The combined countries of Oceania is a region of 3.3 million square miles, just a little smaller than the 3.8 square miles of the United States (includes Alaska). What is it like to live and work in a country of water?

Vulnerability is a constant. Travel from one village or town can require only a very short walk on land since some of the islands or atolls are only a couple of miles wide or, in some places, the width of a room in a house. Alternatively, it could entail getting into a motorboat to fly and bounce across the waves to villages on other islands. Although getting into a motorboat is something most of us land-dwellers would do for recreation, islanders take this method of transportation for granted as ordinary travel.

Even though ordinary, traveling by motor boat can be precarious, as I learned from a priest from the country of Kiribati.

Last Christmas Eve, he and two companions set off to celebrate midnight Mass in another island village. Strong winds put them off course, and they lost direction, leaving them adrift for 21 days. Having no compass or access to cellphones or radios, they could not send distress signals. The gas tank eventually emptied, and they had neither food nor water, except what they collected from rain.

Terrified even thinking about being so vulnerable, I was puzzled that they would go out into the sea without a compass or means of communication. The priest told me they rely on inherited skills of scanning the heavens, stars, sun, moon, waves and currents to navigate these vast expanses. However, this time, the environment was against them, and the three floated in circles until they finally washed up on an island, not their intended destination. The people living there rescued them and contacted their families to let them know they were safe.

The vagaries of the sea are not the only vulnerabilities people face. Increasingly unpredictable climate changes, poor economies and border insecurity are part of daily life. It is normal for the small islands to experience strong winds blowing off the ocean, but today, because of climate change, hurricanes and cyclones are stronger and more frequent than ever before. Local family housing is often fragile, so storms are devastating.

While visiting a church in Fiji that was almost totally destroyed by a strong hurricane, I also found that nearly every house or school in the area had new roofs, replacing those blown away in the latest hurricane. These replacements do not come quickly, and they are an economic liability for the families and the government. Communication systems are also difficult to maintain because of climate-related storms.

The ocean is rising at a great pace, and many people, particularly those living on the smallest islands, are anxious about the impact this has on access to fresh water as well as the threat of having their homes submerged. They live with the fear of how and when they will need to relocate.

Kiribati has already bought land in Fiji for such relocation. A number of its people have even migrated to Iowa and other places in the United States. Kiribati has a population of about 100,000 scattered on 21 of the 33 islands and atolls. Having to leave their country involves many losses, including identity, heritage and cultures that have survived for centuries.

Unfortunately, there are limited employment opportunities on the islands for either women or men. Fishing has historically been the primary preferred employment, but markets have decreased as the ocean is overfished, and rising sea levels have destroyed some species of marketable fish. A majority of families still survive on subsistence fishing or farming or on money sent to them by family members who have migrated to other countries.

Tourism provides some opportunities, particularly in European or American hotels and resorts. Although these are opportunities, wages are not high, and everyday commodities can be very expensive, as many goods need to be imported. Even local goods can be expensive. Two Indian families have developed very large and lucrative clothing companies in Fiji, and although their luxury goods are prominent in larger city malls and in international airports, the average Fijian would not shop there.

Facing vulnerability is an everyday venture, but the islanders do so with a vital life of faith. Religious practice is quite strong in most island communities, and services are lively with music and dance.

Sr. Denise MacMahon of the Missionary Sisters of the Society of Mary from New Zealand is one of the leaders, along with two laywomen, Temelesi and Mere, in a Fiji-wide interfaith meditation program that includes adults and children. Forty schools in the country commit students to a few minutes of meditation each morning before classes begin. MacMahon is also the recently appointed secretary for the Conference of Women and Men Religious of Oceania.

Australian Sr. Clare Condon is the superior of the Good Samaritan Sisters, founded in Australia and extended to many Pacific Island missions. She was just back from officiating at the final profession of vows of a Kiribati woman. Catholicism is very strong in the region, brought by French missionaries in the early 1800s. Kiribati's first missionaries were lay men from Samoa. In 1990, the bishop of Kiribati strengthened this lay church when he started a pastoral institute that is lay-run.

Sr. Nanise Degei is Fijian and superior of the Sisters of Our Lady of Nazareth, the first indigenous order of women religious in the South Pacific, south of the equator. Her sisters are scattered in mission on many of the islands of Oceania, and they have schools and engage in pastoral work. Degei is also the current chairperson of the regional conference for religious.

Vulnerability also includes border insecurity, according to these three sisters. They spoke of concern of the lack of adequate police security for Oceania that leaves their youth vulnerable to traffickers.

Although remote, these islands are not exempt from this global phenomenon. Keeping borders patrolled is virtually impossible, since even Fiji, one of the larger islands, has only one patrol boat. It is not hard to imagine the expanse of porous boundaries available to traffickers trolling the Pacific.

All three sisters' congregations provide schools and youth programs to educate students about the potential dangers of trafficking. They focus on girls' education because in the past, for cultural reasons, girls did not go to school. Now, parents realize that educating their girls is an advantage. Unlike boys, who achieve higher education and tend to emigrate, girls who attend university tend to stay in their countries and care for their parents. Girls also tend to become active civic leaders and use their skills to find employment.

According to the sisters, although often invisible to the rest of the world, Oceania culture offers the world many gifts: music, dance, art and a deep understanding of familial relationships and sense of genealogy. I got a taste of this when I visited a young seminarian who was in a care center suffering injuries from a serious car accident. When asked about his parents, he spoke excitedly and at length about each one. Very proud of familial roots, he described the lineage of each and the threads of relationships in their families.

Invisibility can even lead to expendability when islands are seen only as small in size, in population, and poor. Even tourists who visit them for exotic vacations may not realize the precariousness of local daily life caused by global factors. As I traveled about, I found myself wondering if the tourists enjoying all the beauty ever leave the gorgeous resorts to learn about the people whose homes are next door or seek to understand how these small islands fit into global concerns. Thanks to missionary friends, I had my eyes opened.

It was frightening for me to read an article in the Fiji airline magazine on the way home about the use of the islands by the United States as a proving ground for nuclear testing from 1945 to 1965. At that time, our leaders thought that because the islands were small in size and population, only a few thousand people might suffer from radiation and thus could be sacrificed for a greater good. The truth is that today, many people from the area are still suffering the consequences of this testing.

I am left with these questions: Are we now similarly rationalizing the current situation of the impact of climate change that threatens to sink many of these islands into oblivion? What will it take to wake us up to recognizing that the future of our well-being is in fact dependent on theirs? 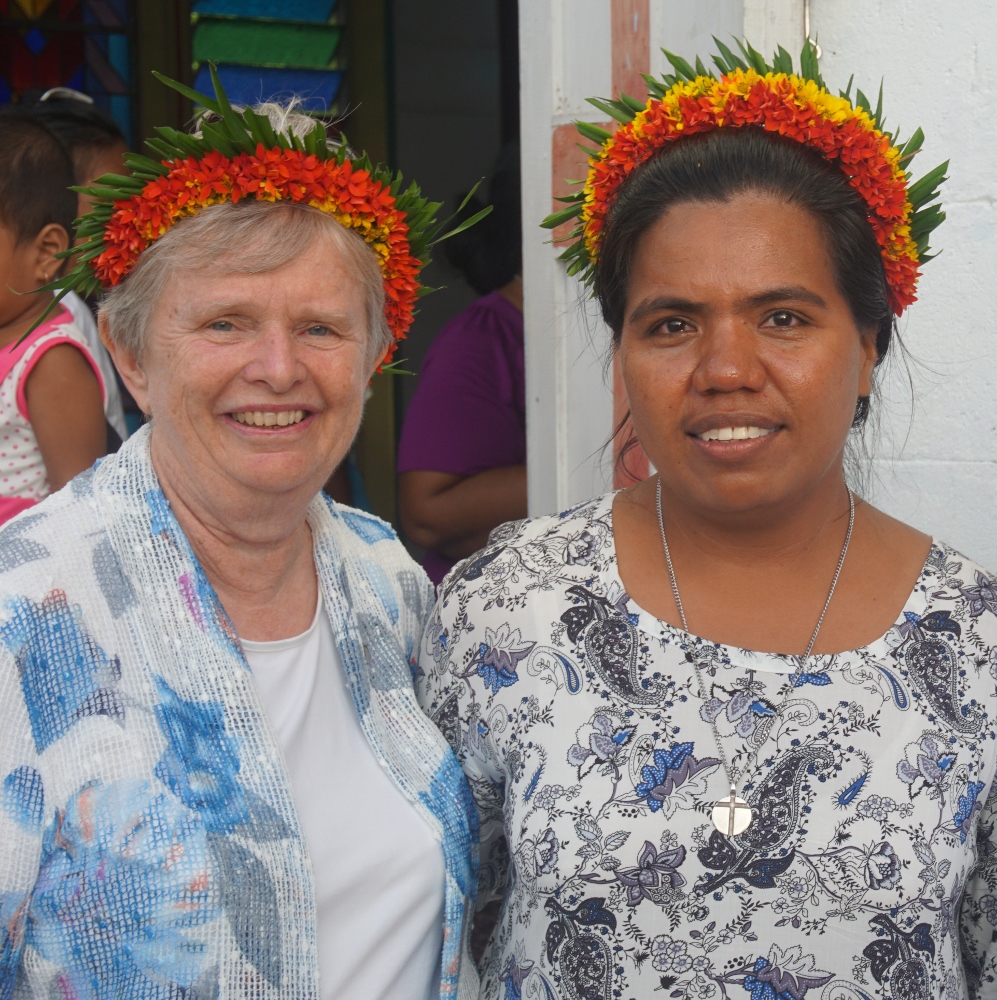 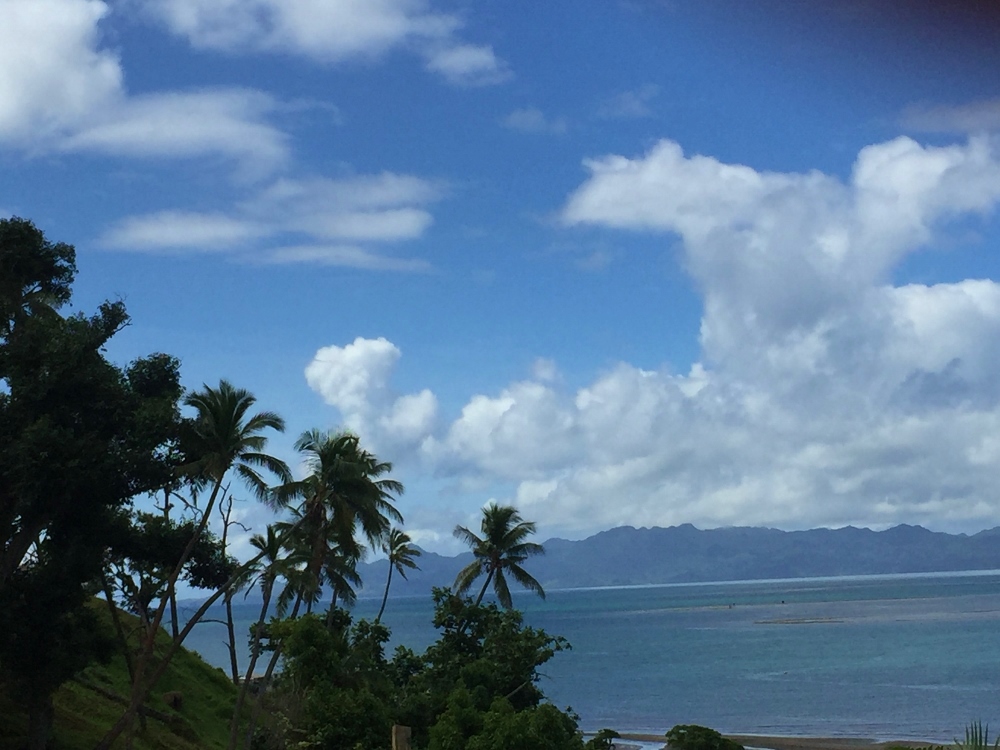 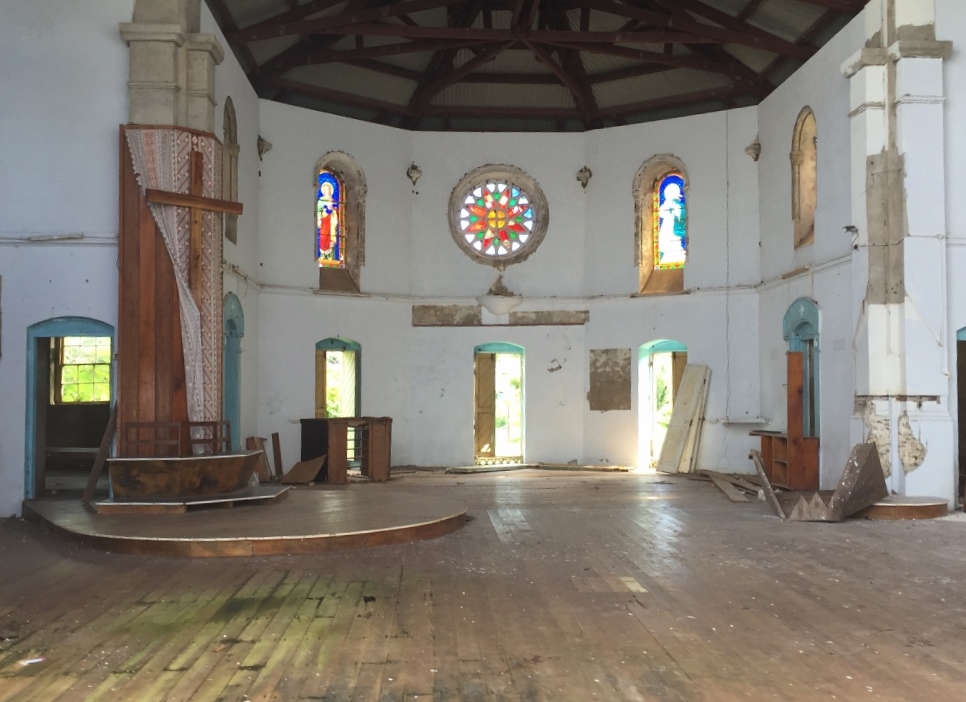 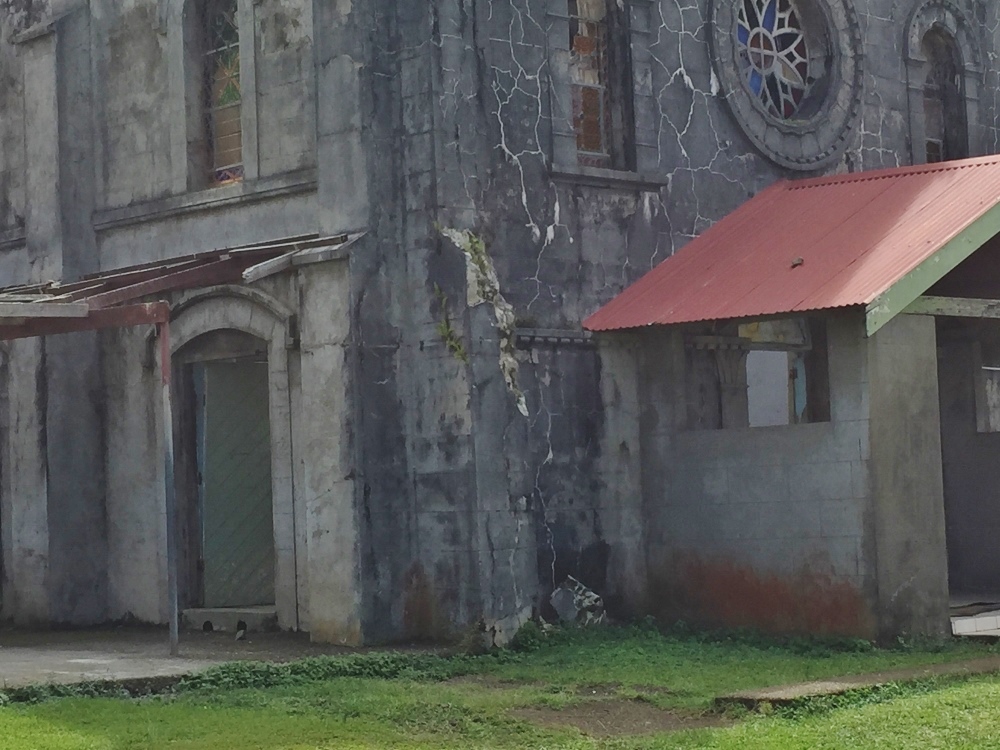 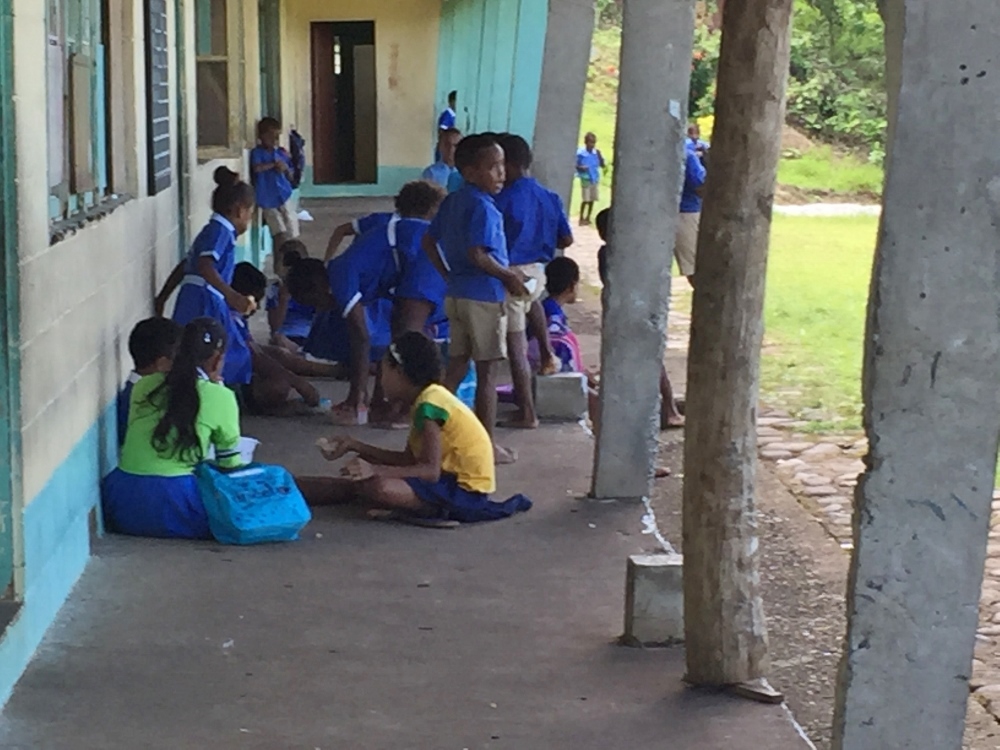 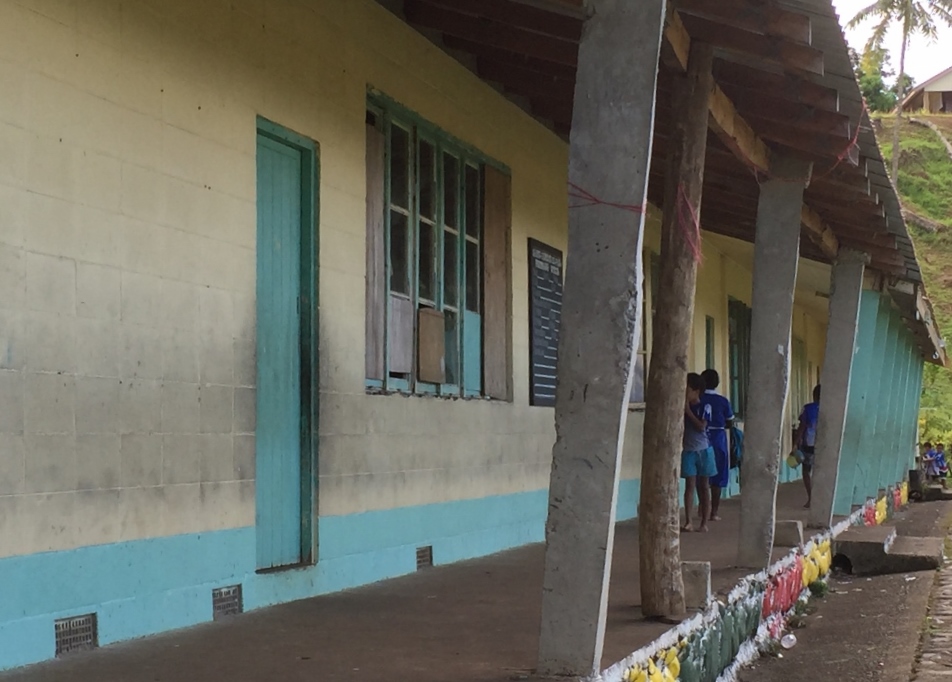