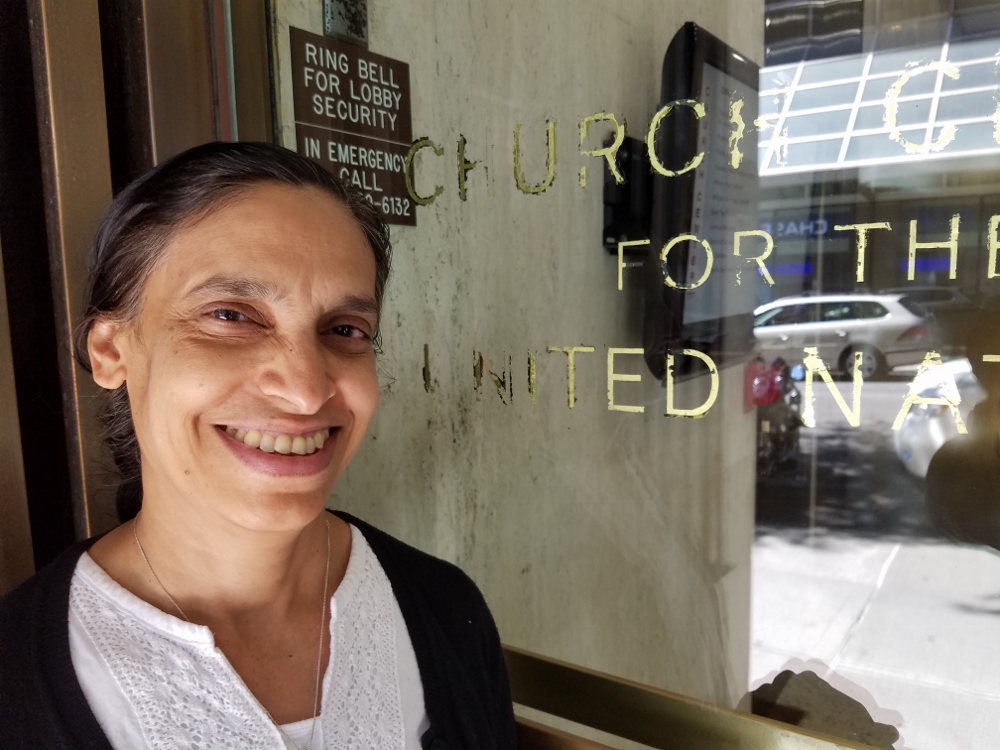 If there is anything a reporter who covers Catholic sisters and the United Nations quickly learns, it is that women religious at the U.N. are deeply committed to the world body's work, mission and agenda.

The sisters genuinely feel that the United Nations offers hope to a broken world — a place that, even with all of its attendant frustrations and imperfections, meaningful dialogue can occur. Countries can meet on (somewhat!) equal terms at the U.N., and agendas of peace, economic justice and environmental protection are taken seriously, they say.

"Not only the Catholic Religious at the U.N. but the entire interfaith community at the U.N. continue to uphold humanitarian values because the U.N. promotes the culture of peace," Sr. Celine Paramunda, the U.N. representative of the Medical Mission Sisters, told me recently. "The U.N. is and must be the central dynamic organization having its core message, 'We the peoples,' can live together in a culture of peace."

The U.N.'s goals are also, at the end of the day, the sisters' goals: The U.N.'s efforts to promote policies that promote protection of both humanity and the planet align with the charism of religious congregations represented at the U.N., said Sr. Justine Gitanjali Senapati, the Congregations of St. Joseph's representative at the U.N. These include efforts to improve living conditions for millions, "those who remain at the furthest behind in the faces of poverty, hunger, illiteracy and ravages of war," she said.

Earlier this month, Paramunda, Senapati and other sisters who represent their congregations at the U.N. participated in two weeks of meetings about how the global body and its member states can implement the U.N.'s ambitious Sustainable Development Goals, known as SDGs — efforts for reducing poverty and facing other global challenges.

But they did so a bit worried.

Their concern? That the recent referendum — known as Brexit — in which voters in the United Kingdom opted to exit the European Union  is another sign of increased nationalism in the world. And that, the sisters argue, could undermine the work of international bodies like the United Nations.

"Personally, I was shaken up by the news of Brexit," said Senapati. While noting the UK's important — some would say outsize — place at the U.N., Senapati believes the Brexit vote was a milestone because it shows up a troubling trend: "the tension of personal, or national, advantage," she said, "versus the greater common interest of the world."

Such worries were noted immediately after the voters in the UK cast their ballots on June 23. The New York Times, for example, said  the referendum results symbolize "the cracks in [the] postwar foundation" that, among other things, created the United Nations. The vote also undermined "the postwar consensus that alliances among nations are essential in maintaining stability and in diluting the nationalism that once plunged Europe into bloody conflict — even as nationalism is surging again."

Of course, nationalism is not just on the rise in Europe. Donald Trump's presidential candidacy is grounded in robust nationalism. And one of Trump's prominent supporters, former Alaska Gov. and one-time Republican vice presidential candidate Sarah Palin, said in the wake of the Brexit vote that the U.S. should consider a similar exit from the United Nations. "America can learn an encouraging lesson from this," Palin said in a Facebook post. "It is time to dissolve political bands that connect us to agendas not in our best interest. May U.N. shackles be next on the chopping block." 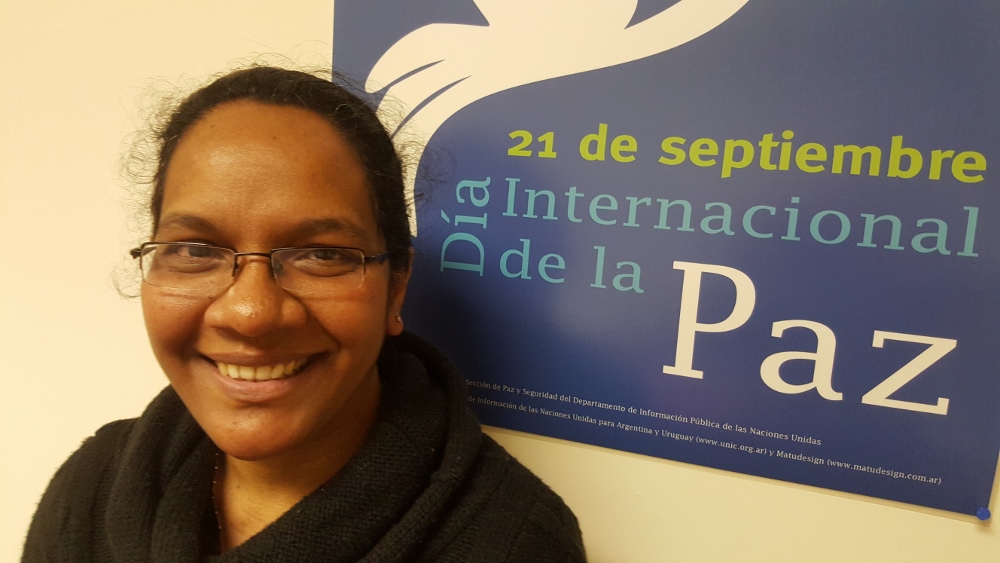 It is no exaggeration to say that sentiments like this deeply worry Senapati and the sisters at the U.N. They believe this, of all times, is not the moment to undermine the United Nations, given global concerns about climate change, eradicating poverty and problems like migration and human trafficking.

While the Brexit vote does not have — yet — direct implications for the U.N., Senapati notes that the UK's planned leave-taking of the EU affects one of the five permanent members of the U.N. Security Council, the body which has the task of "maintaining international peace and security."

"It works as an engine to the entire international system or head of world's biggest organization and international mechanisms to maintain human rights," she said. As a result, it "has a great impact now within the U.N. body." The Brexit vote, Senapati said, has not only created confusion within the UK itself but "stands as a stumbling block for entire U.N. member states and to the European Union."

The sisters are not alone in their concern. Susan Martin, an international migration scholar who teaches at Georgetown University, said in an email after the Brexit vote that, "To the extent that other countries move towards greater nationalism and unilateralism, the trend would be very worrying for solving global problems."

She added: "The UK has been a major supporter of humanitarian and development assistance worldwide. I don't see their exit from the EU as necessarily causing a retreat from those commitments. The UK had a strong influence, though, over the EU's engagement with the world, and that's been lost."

Martin raises a good point. Could the withdrawal of the UK possibly affect funding for EU-supported humanitarian work — the kind of anti-poverty initiatives supported by sisters and their many Catholic networks? Paramunda believes it is too early to predict anything on that score. "I do not want to be pessimistic," she said.

But Paramunda added that what she finds especially troubling about Brexit is that it suggested that people are angry at global and multi-lateral institutions that, in fact, are working to solve humanitarian and social problems. Through the SDGs, the United Nations, for example, is working on a "transformative agenda of 'leaving no one behind'" in the area of social and economic development as well as environmental protection.

Certainly those supporting Brexit would not disagree with that. And Paramunda herself acknowledges that the vote was an understandable, if frustrating, reaction to economic and social realities in Great Britain and elsewhere in the world.

"There are many people being left behind within the EU," she said. "If the politicians take it as a sign of what is going on, and reflected on that and took some action, then that is good," she said, arguing that the global economic elite "are enriching themselves and ignoring the needs and concerns of ordinary people."

Like other sisters who work at the U.N., Paramunda acknowledges the many frustrations and problems associated with the United Nations, but said it remains an important forum where the voices of the poor are heard and acknowledged and where poor countries have a certain standing equal to rich nations.

That is a repeated theme with the sisters, who acknowledge, of course, that countries like Great Britain and the United States have more than their share of power at the United Nations. Still, the U.N. is a kind of global town forum — and the sisters admire that about it.

"It's the only place where Sudan and Sweden can come, sit down next to each other and meet each other," Paramunda said soon after the Brexit vote when I interviewed her at the Church Center for the United Nations, located across the street from the U.N.'s main headquarters. "It is also the center where the common good of the entire global community is respected."

As she sat in a dining area in the basement of the U.N.'s headquarters, Sr. Elsa Muttathu, the U.N. representative of the International Presentation Association, made a related but similar point, noting that not only is the U.N. a place where small countries and powerful countries can be in dialogue. It is also a place where non-governmental groups like religious congregations of women and men can have the ear of governments. 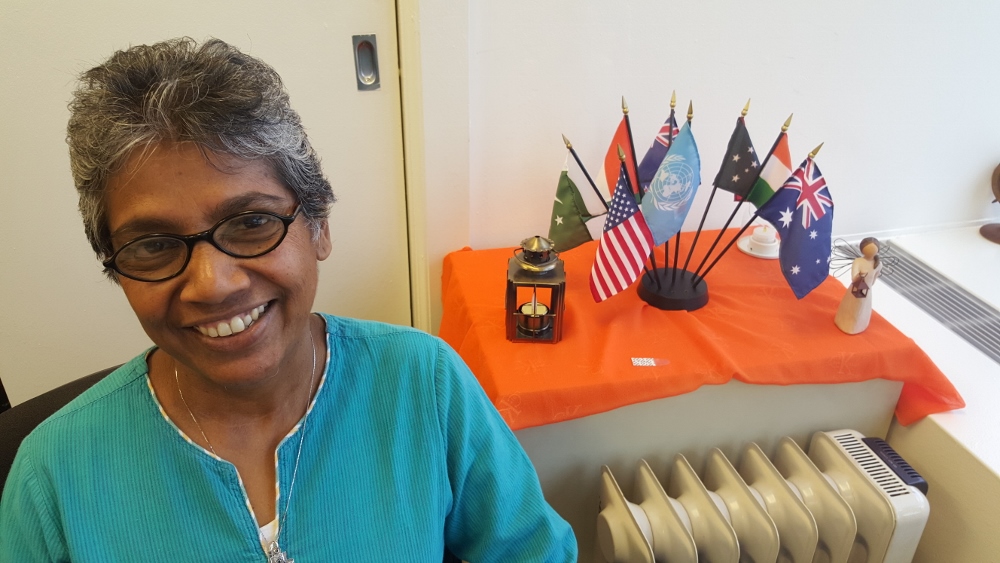 And in having such access, she said, the stories of people at the grassroots — those who are living in poverty and with the problems caused by climate change, for example — can be heard. And sisters, with the work they are doing in the world, are among those best equipped to convey those stories. "There is still a space where the civil society can bring up the issue of the grassroots," Muttathu said. "This is the only place where governments can be held accountable to people through an international system."

Muttathu, like the other sisters who work at the U.N., knows that one of the global body's challenges is that there are member blocs that can, and often do, align with the world of "the haves and the have-nots." Among the goals of the SDGs is to "end poverty, protect the planet, and ensure prosperity for all" with specific targets to be reached over the next 15 years.

Votes like Brexit and comments like Palin's, Muttathu said, put a chill on the efforts to promote the SDGs.

"We have to act to put these policies, the SDGs, in place," she said. "If we don't do that, short-sightedness might lead to further deterioration of the planet. If we aren't reading the signs and making appropriate changes, then I am not sure we can enact the transformative agenda. The turn we take at the moment will decide where we go, where we take our world. We feel it intensely here, the struggle between power blocs, those who really want transformation and those who want to maintain power and control."

Keeping the pressure on is a key part of what the sisters do at the United Nations. And they do so, Paramunda argued, from an understanding that a globalized and interconnected world is a fact of life now, and that it is simply not practical or even possible for countries to erect walls and "act as separate countries. The whole world is inter-connected now and this interconnectedness must be fostered not feared."

Votes like Brexit may be shots across the bow on behalf of growing nationalism. But they ignore the interconnectedness of not only nations, but of problems that need shared solutions, Paramundasaid. "As a global society, we need to do more to invest in peace."

Q & A with Sr. Maureen Gallagher, setting up financial independence paths for women in Mexico

Sisters registering as many people as they can to vote