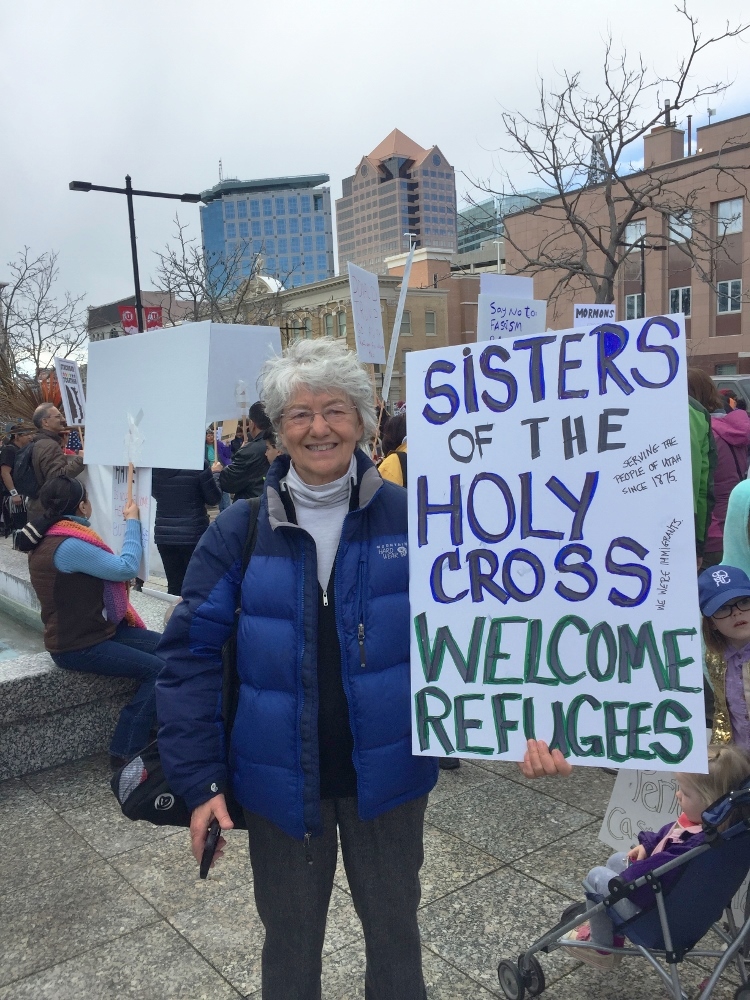 Holy Cross Sr. Mary Ann Pajakowski at the Feb. 4 March for Refugees in Salt Lake City, helping to assure refugees and immigrants that they are welcome in Utah. (Courtesy of the Sisters of the Holy Cross)

One thing that is certain about the presidency of Donald Trump: It has caused millions of people to find a new voice in protest. And among them are women religious.

Let's be clear: Sisters have always had a voice — and a powerful one — and they've never been afraid to use it. Global Sisters Report has documented many times, in many ways, that sisters have used their voice to shape policy, stand up for those on the margins and even to get large corporations to change their ways.

But sisters have not often used the media to broadcast that voice. They certainly don't mind when reporters show up for an event or call with questions, but it's not a widespread practice to send out a press release alerting the media they have something to say.

Trump's policy of banning refugees from Muslim-majority countries, however, changed that. In the days after the president's executive order was announced Jan. 27, the Leadership Conference of Women Religious, the Adrian Dominicans, and the Sisters of Mercy all issued forceful statements denouncing the policy.

Now, the Sisters of the Holy Cross in Notre Dame, Indiana, are not only speaking out, they're taking action in a way that enables and encourages others, as well. Through the "19:33 Offering," the sisters will donate $1,933 to each of six organizations that serve immigrants and refugees, and they are encouraging others to donate $1.93, $19.33, $193.30, or any other amount.

The "19:33" comes from Leviticus 19:33: "When foreigners live with you in your land, do not mistreat them. You shall treat the foreigner who lives with you no differently than the citizens born among you; you shall love them as yourself; for you too were once foreigners in the land of Egypt. I, the Lord, am your God."

And Sr. Sharlet Ann Wagner, a member of the leadership team, points out in the press release that 1933 was the year the Nazis seized power in Germany and began to strip Jews of their rights.

"As Christians, people who are, by definition, followers of Christ, we are called to action on behalf of the most vulnerable among us," Sr. M. Veronique Wiedower, president of the congregation, said in the press release. "As people of God, we must speak out in support of our millions of Muslim sisters and brothers, and all who are targets of persecution because of their religion. Finally, as Sisters of the Holy Cross, our core value of compassion 'compels us to stand with and embrace others in their suffering.'"

Though the sisters are technically only inviting donations from their own individual sisters, their associates and a nearby church, they wouldn't turn away donations from others, and — more strikingly — are welcoming others to borrow the 19:33 Offering concept for use in their own parishes, campuses, workplaces and communities.

The donations the Holy Cross sisters collect will go to six organizations that either provide direct service to immigrants and refugees or pursue legal challenges to unjust laws and policies: