Learning a language with the Good Shepherd sisters

by Katie Delaney
This article appears in the Notes from the Field feature series. View the full series. 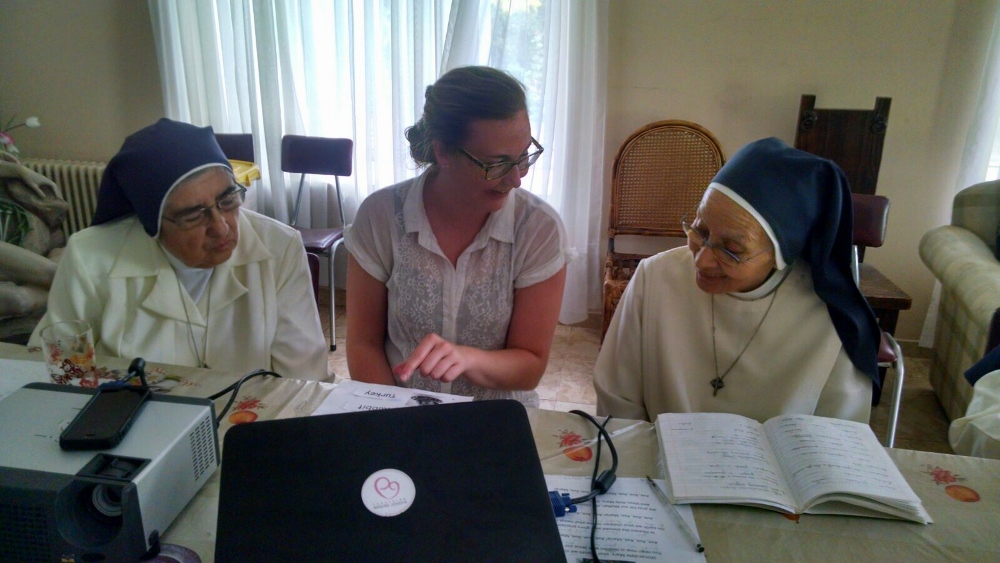 Santiago, Chile — Notes from the Field includes reports from young people volunteering in ministries of Catholic sisters. A partnership with Catholic Volunteer Network, the project began in the summer of 2015. This is our fifth round of bloggers: Katie Delaney is a Good Shepherd Volunteer with the Fundación Madre Josefa (Mother Joseph Foundation) in Santiago, Chile, and Lauren Magee is a Good Shepherd Volunteer at Hands of Hope, an income generating project that provides dignified employment for villagers living with HIV/AIDS in Nong Khai, Thailand.

In early February, one of my fellow Good Shepherd Volunteers, Liana, and I received an unexpected request from one of our supervisors: "The contemplative sisters who live behind you want to learn English. Can you set up a time to meet?"

While we don't live directly with the Sisters of the Good Shepherd here in Chile, our house does share a large property with the sisters, with two of their communities adjacent to ours. Before this request came in, we had only met the sisters from one community, which was of retired apostolic sisters. We'd come to learn that this meant they were active in ministry outside their community to further the congregation's mission.

We started the 15-minute walk over to the community of contemplatives, curious what might be prompting their avid interest in English.

Upon arriving, we learned that Sister Lily, the congregational counselor to the contemplative sisters based in France, was coming to visit in April, and she only knew French and English. Having heard that the Good Shepherd Volunteers were teaching English classes as a part of our service, the sisters asked for our help to learn as much English as they could to make Sister Lily's visit more comfortable. About six of the 11 sisters in the community were interested in class, and we arranged to come twice a week for an hour and a half. Our first class would be in one week. 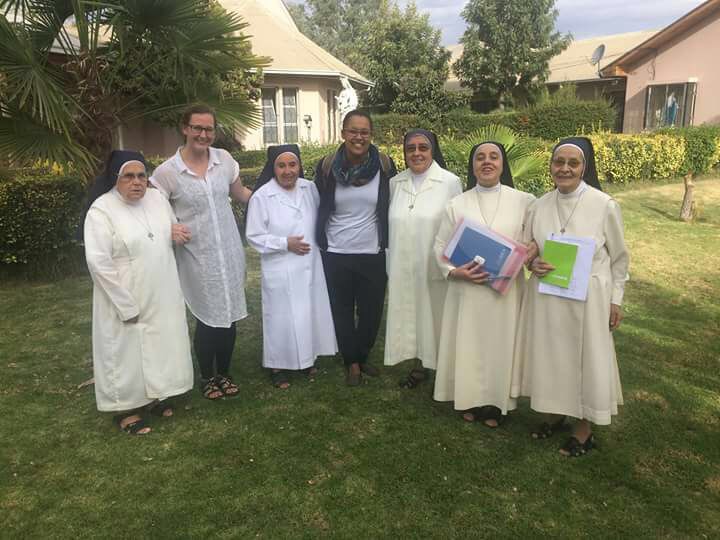 Leaving for our first meeting, I couldn't help but wonder: How was a class with contemplative sisters going to go? From a content perspective, I knew we would be fine. At that point, Liana and I had already led English classes for adults and children, and we were preparing for our next round to begin. With Liana's four years of teaching experience in the United States, she took the lead on creating our lesson plans while I helped facilitate.

The question arose because I had never met or worked with any contemplative religious. All I knew was that as contemplatives, the sisters essentially were cloistered to live a life dedicated to prayer, only leaving their community for necessary errands or doctor's appointments. I wasn't sure what to expect in terms of the sisters' participation and our dynamic as facilitators.

It only took a few minutes into our first class to discover that the sisters would become some of our most dedicated, lively and goofy students. They welcomed us with energy, enthusiasm and a delicious snack, a practice that continued over the course of our classes, much to our delight.

Every class, they were willing to ask questions and try new games and words in English. Even if they mispronounced something and had to try five times over, they did so with grace. After seven months of Spanish immersion in Chile, with moments of frustration and discouragement that I'd experienced as I learned a new language, the sisters' humor and zest for learning was refreshing. As educators, we know we're not supposed to have "favorites," but among all of our classes, our time with these sisters quickly became some of our most treasured. 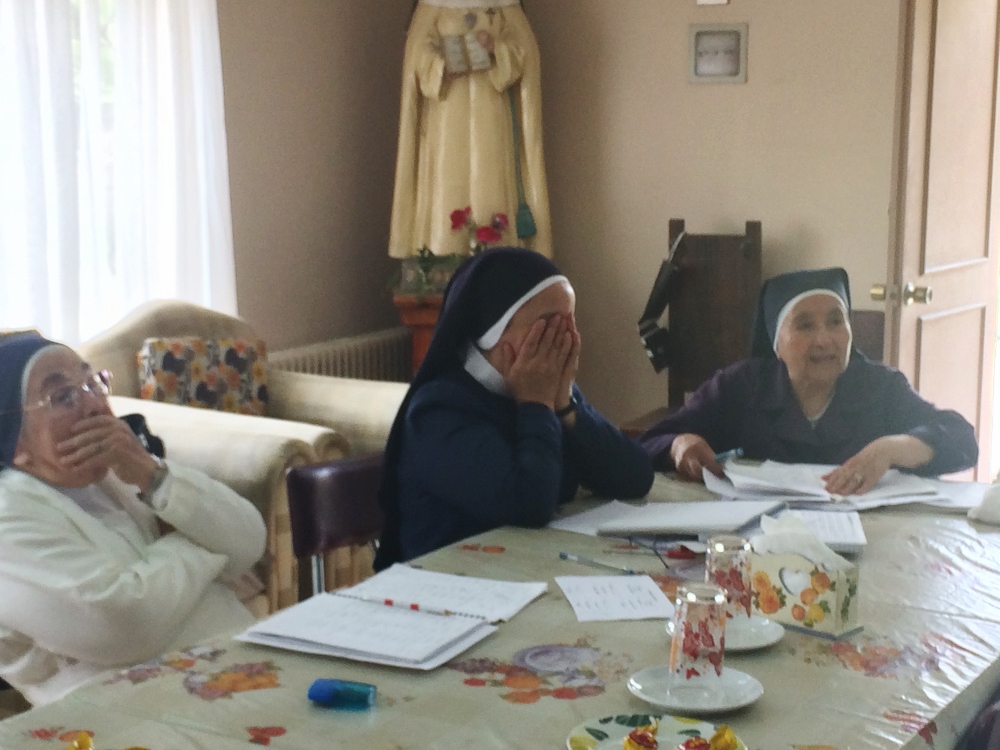 The sisters also welcomed guests and visitors, as long as they "stood in" as Sister Lily so they could practice what they learned with a new face. Kimberly Williams, the previous executive director of the Good Shepherd Volunteers, came to a class in early March, followed by Reggie, Liana's brother, during his visit to Chile one week later.

Building relationships with the sisters was important to Liana and me coming into the program because when we lived with the De La Salle Christian Brothers in our time as Lasallian Volunteers, we learned so much about the Lasallian charism uniquely from the brothers. We hoped to gain similar insights into the mission of the Good Shepherd. In this way, it meant even more to share this aspect of our Good Shepherd Volunteer experience, which brought us so much light and love, with others.

It wasn't long until the sisters had the opportunity to practice their English skills when it mattered most. With the arrival of Holy Week also came Sister Lily!

The sisters had asked that Liana and I visit on her first day to review the schedule of her visit and assist with any potential translation challenges. Upon arriving, we saw our diligent students practicing what they had learned: "I am excellent!" and "Thank you!"

Sister Lily took notice, too, saying how impressed she was to hear the sisters practicing English over lunch and how she couldn't wait to tell her community back in France.

While we taught the sisters basic day-to-day conversation, we didn't have enough time to delve in-depth for their official meetings. So Liana and I had the privilege of serving as translators for Sister Lily's meetings with the community and the provincial over the following week.

We honestly didn't feel much more confident in our own translation abilities, but when put to the test, we were surprised by how much we did know. Even though our Spanish wasn't perfect, it was fulfilling to see our service contribute in some way and to acknowledge how far we had come in our own language-learning.

We also gained an inside look into the life of the contemplatives, who support their apostolic sisters through daily prayers and community work, such as selling some goods from their garden to contribute to the sisters' various ministries. I gained a whole new appreciation for the contemplatives' unique commitment to the congregation's mission. 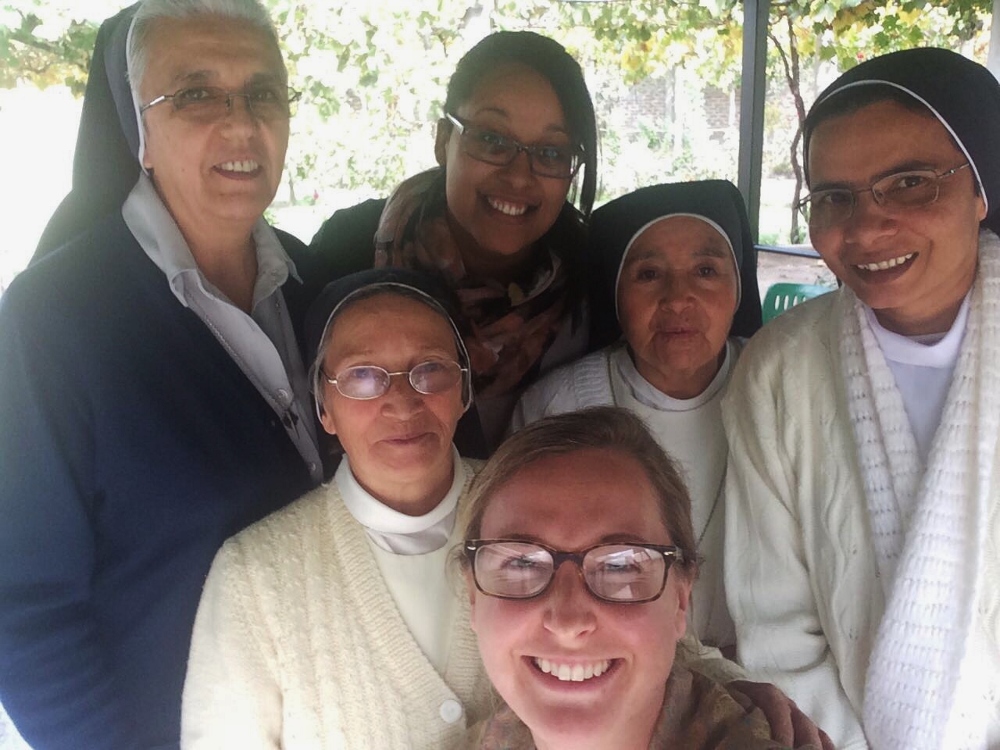 Although Sister Lily returned to France after one week, the contemplative sisters, Liana and I all agreed that we want our English classes to continue for the rest of our service year, which runs through July.

At the end of one of our visits, the director of the contemplatives' community, Sister Suzana, told me, "Tú no sabe lo que significa eso para nosotros" — "You don't know what this means to us."

I responded, "Es el mismo para nosotros" — "It is the same for us."

[Katie Delaney is a Good Shepherd Volunteer in Santiago, Chile.]

Learning a language with the Good Shepherd sisters