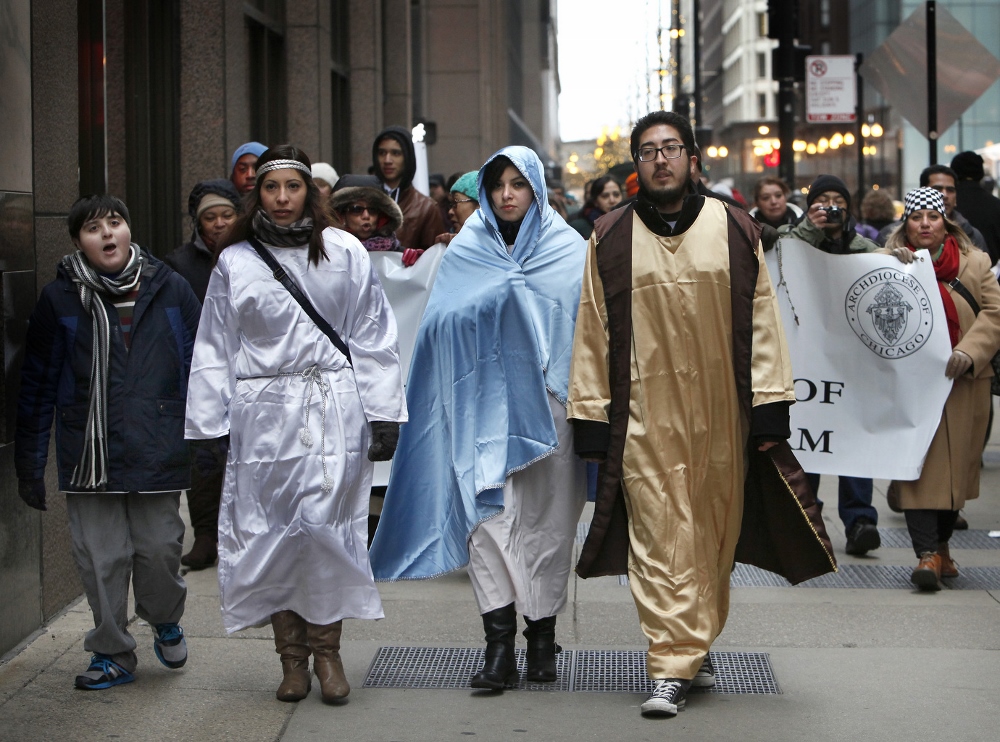 Ivette Contreras, dressed as an angel, and Yazmin Diaz and Xavier Diaz, from St. Gall Parish in Chicago, portray Mary and Joseph during a Christmastime "posada" through the streets of Chicago Dec. 19. Catholic advocates for immigrants held the traditional re-enactment of Mary and Joseph's search for shelter as a time to pray for those about to be deported and to advocate for reforms in the U.S. immigration system. (CNS photo/Karen Callaway, Catholic New World)

Global Sisters Report has been following this issue. Click on the Migration tag next to the date to read articles from Sr. Janet Gildea and others.

There have been numerous reports about the issues of detaining families who fled violence in Honduras, Guatemala and El Salvador to seek asylum in the United States, from how they’re often deported before they get the hearing American law says they are entitled to, to how they’re being held in what critics say is essentially a prison.

“The case is brought on behalf of mothers and children who have fled extreme violence, death threats, rape and persecution in Central America and come to our country for safety,” the case states. “Each has been found by an immigration officer or judge to have a credible fear of persecution. Yet, instead of releasing these families as they await their asylum hearings, which the Department of Homeland Security has typically done, the agency now categorically detains and denies them release on bond or other conditions.”

The ACLU says the detentions are unconstitutional, cruel and unnecessary.

“The government is punishing some of the most vulnerable among us – women and children who have legitimate asylum claims. America has now become a country that locks up families who have done nothing more than come here to ask for refuge,” the group says.

But the federal government is pressing ahead with the aggressive detention and deportation strategy, which is aimed at deterring the flood of would-be refugees coming to the border: Officials recently announced plans to create the nation’s largest family detention facility.

Located in Dilley, Texas, on the site of a former oil field workers’ camp, the facility eventually will be able to house 2,400 people.

Royce Bernstein Murray, director of policy for the National Immigrant Justice Center, said the idea that detention will stem the tide of immigrants doesn’t make sense, as people fleeing violence are not going to reconsider their options when choosing between death in their home country and finding safety in the United States.

“If people are fleeing violence, they don't have the luxury of saying, ‘I’m going to end up in detention? Then, no, I’m not coming.’”

There is also the issue of unaccompanied children appearing at the border – minors who were sent on their own to the United States in hopes of avoiding death from gangs and criminals.

Now, the group has found that only about one third of the nearly 64,000 children with cases pending in immigration court as of Oct. 31 have an attorney.

TRAC also examined the outcome of cases since the surge of unaccompanied minors began in 2012. In those 20,000 cases, it found that when the child had an attorney, 73 percent of them were allowed to stay in the United States. But when they did not, only 15 percent were allowed to stay.

For those who are stuck in detention, many efforts have been made to give them hope, including the Lutheran Immigration and Refugee Service, which recently created a gift registry in an attempt to make sure that each of the 300 children in the Karnes County Detention Center and the new center in Dilley got a gift for Christmas.

“These little ones face medical issues, restricted movement and depression as a result of detention,” LIRS’ Linda Hartke wrote. “We only need 300 gifts to create happy memories for these children amidst the trauma of spending Christmas in a detention center.”

A recent check of the registry showed that every gift had been purchased.

This successful campaign follows an earlier one where LIRS attempted to have supporters write 1,700 cards so every family in detention over the holidays would get a message of hope. Supporters responded to that campaign with 9,000 cards.

In a village of tents, refugees make a life as they wait on US asylum