Editor’s note: GSR staff writer Soli Salgado is at the U.S.-Mexico border for the SOA Watch Border Convergence. GSR will continue to have coverage of the gathering and the sisters there in the coming days.

Inside a one-room soup kitchen in Nogales on October 8, about 20 young women religious labeled their nametags, adding a sticker to indicate their language preferences.

Charity Sr. Tracy Kemme and Franciscan Sister of Perpetual Adoration Julia Walsh led the room in prayer, joined remotely by sisters across the country who were offering the same prayers and starting the same conversations in solidarity regarding effective immigration reform. The reverence in this room, covered in social justice murals, was unmoved by the noisy traffic just outside the open door.

Though the Encuentro de Hermanas at the Kino Border Initiative Soup Kitchen was intended for Giving Voice members (women religious younger than 50), those who heard the prayers from the street decided to join, doubling the size of the room. This second group of people, who had participated in the SOA Watch Border Convergence earlier that day, included elderly sisters, associates, and a few men, with a self-proclaimed “Mister of Mercy.”

SOA Watch is an organization that for 27 years has protested the School of Americas (now the Western Hemisphere Institute for Security Cooperation) at its site in Fort Benning, Georgia, though this year, they took the rally to the border in Nogales. The military institute trains Latin American soldiers in what SOA Watch says is techniques of violent warfare. WHINSEC says it offers courses similar to other U.S. military institutes, including cadet leadership, medical assistance and intelligence analysis.

“The gathering with other sisters is really to hear the stories of those working directly on the border,” said Sister for Christian Community Alison McCrary of New Orleans, who also coordinates SOA Watch’s legal collective.

“It’s for sisters to share their ministries, to pray together around this issue of immigration, for an immigration policy that provides compassion and dignity to all our sisters and brothers in other countries,” she told GSR. “We must educate ourselves on the root causes of immigration ... and [join] with others who share the same values.”

One thing was clear as the microphone was passed around for introductions: Everyone felt personally called and moved to be at the border that day. Some felt they were there on behalf of the rest of their community, while others who participate in the SOA Watch protests every year were especially delighted at the attention the group was bringing to the border this time.

As the microphone continued around the room, more reasons for being at the border came to light. People in the room felt concern about the United States’ immigration policies. They came in response to the pope’s call to care for migrants. One person said we’re called to live like there are no borders. Another said the issue of brutality and violence at the border demands we stand up in outcry. The rhetoric of this election cycle inspired others to join in solidarity with demeaned immigrants.

Once you know what it’s like for those in detention, another sister said, you have the responsibility to act. Another woman religious had traveled from Guatemala and said she wanted to see what was going on at the border to understand the reality firsthand.

For Guadalupe Missionary Sr. Lupita Malvais, the gathering was particularly personal. She came to the United States as an undocumented immigrant from Mexico. Her brother — a citizen — and her congregation helped her get her papers.

“I can understand how the people feel who come here with hope to have a better life,” Malvais told GSR. “I know what it is to go to places where they cannot give you what you need because you don’t have papers. Now I can do something. I can vote for better policies in order to have the right politicians who can do something, that they don’t think just of money but of how to help people.”

“This [gathering] gives me a lot of hope because I think we can do something on both sides of the border. We sometimes think we work alone, but we don’t. We need to unify our forces in order to do something to help these people,” she said.

The roughly 40 people in the room broke into smaller groups of five to reflect on what they carried in their hearts that day at the border, the brainstorms manifesting on poster boards at each table with phrases such as “Capitalism is the elephant in the room” and “What is the concept of the border?”

One sister from El Paso, Texas, commented on the two boys sitting in the corner of the room and painting crosses, unrelated to the sisters’ gathering. They earlier asked her what their chances were of successfully crossing into the United States from the El Paso entry, and she said it broke her heart to know that as young teenagers without children and without family members in the United States to receive them, they had virtually no chance.

A few conversations noted the importance of inspiring priests to join the debate: “If you’re not going to have pastors involved, you won’t be able to change the minds and hearts of the general public,” one sister said.

After groups mixed and regathered, and after the room walked around in silence to read what was written on every poster, the Encuentro de Hermanas ended in bilingual prayer and song.

More from the border convergence - At US-Mexico border, SOA Watch focuses on the same message through a new lens
The hope rock 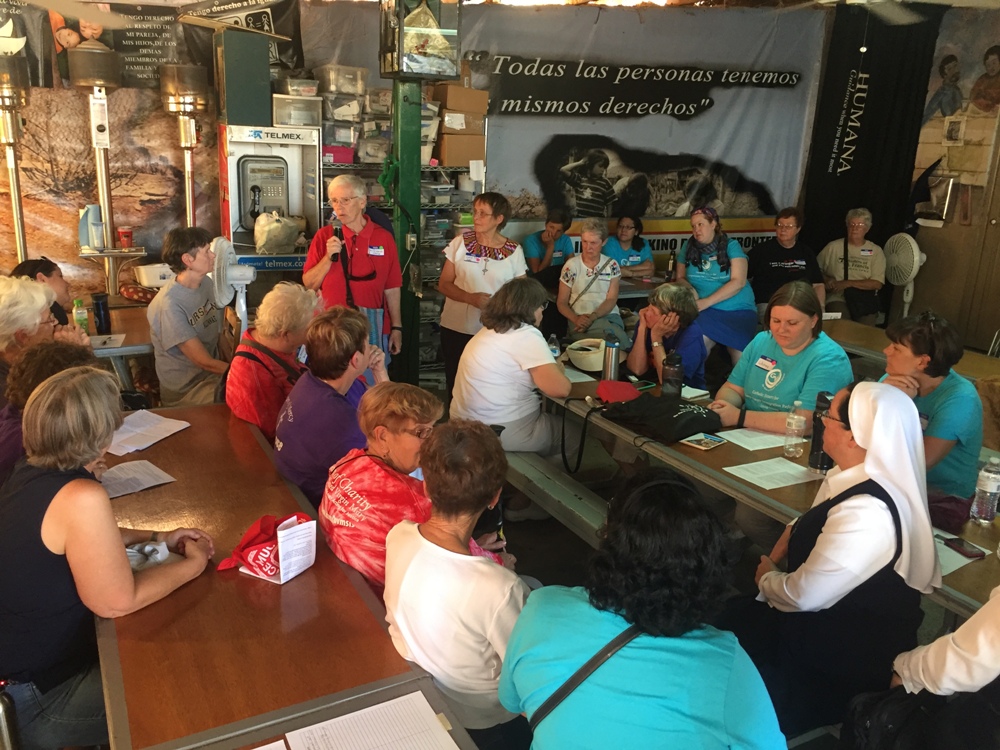 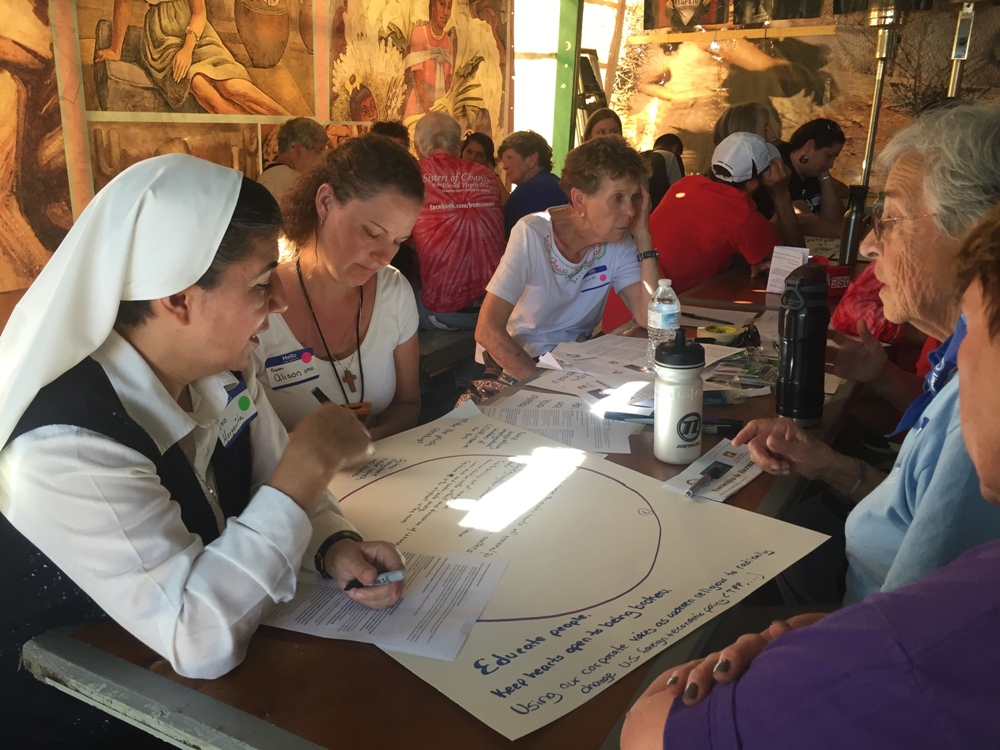