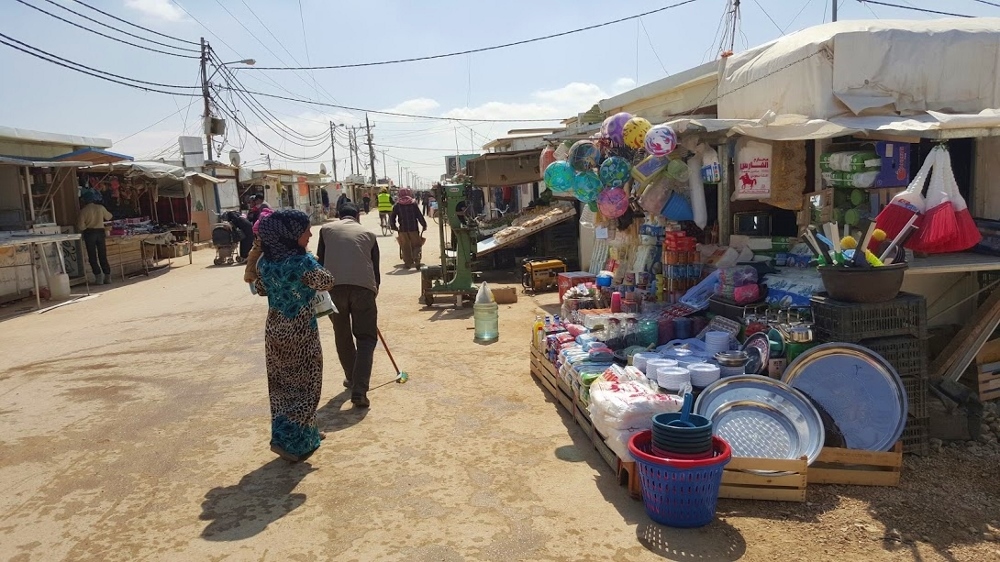 At a refugee camp in Jordan, this is what 2016 looked like.

On a hill that provided an expansive, vista-like view of the Zaatari refugee camp, sat the home of Abu Yousf and his wife, Manar. The couple arrived in Jordan four years ago, escaping the bloody, costly and violent furies of Syria's civil war. "At least there is peace here," Yousf told me. "We don't hear those sounds of bombing attacks."

In an interview early in the year, Manar showed off the family residence with quiet pride — a living area built from cinder blocks, with a television, adjoining kitchen and bathroom for them and their three children, then 5, 3 and almost 2 years old.

Though safe from the horrors of war, life is not easy. Cold winter (biting winds) and hot summer (temperatures of 100 degrees Fahrenheit or more) mark day-to-day life. So, too, does sporadic, less-than-reliable electricity.

"My first hope is to go back to Syria," Manar said, "and my second hope is for my children's future. I don't want my son to have an unstable life like right now."

But how long Manar and her family will have to live in exile in the constant uncertainty of a refugee camp with 80,000 other residents — Zaatari is now Jordan's fourth-largest city — is anyone's guess.

As we enter 2017, it is worth considering the experiences of the millions like Manar and her family who have been displaced in recent years. It is also worth pondering how the many international migration crises that marked 2016 (and several years before that) will evolve into new problems and new challenges this year.

The flow of those fleeing war and conflict, particularly in Syria, continued apace in 2016 — with the photograph of young Omran Daqneesh of Aleppo, the "boy in the ambulance," his face caked in dust and blood, being one of the year's most indelible images.

The number of those "on the move" in 2016 is still being calculated. But in its accounting of the year, the Migration Policy Institute, an independent Washington-based think tank that analyzes migration trends and issues, noted that refugee numbers in 2015 climbed to 21 million. That number in all likelihood will be "even higher in 2016," it said. (The institute named "Dawn of New Migration Reality Brings Focus on Borders, Returns, and Integration" as the top issue for 2016.)

The Syria situation is particularly difficult to bear. I was in Aleppo in 2008 with a delegation of journalists writing for Catholic publications. The focus of our visit was the plight of Iraqi refugees living in what was then a stable Syria. With its deep-rooted history and magnificent architecture, Aleppo was a strikingly arresting and beautiful place. To see it torn apart, with its warm and generous residents fleeing its scarred ruins, is a source of grief, tears and lamentation.

Reflection is especially appropriate this week, designated the United States Conference of Catholic Bishops' annual National Migration Week (Jan. 8-14). It is an opportunity, as USCCB points out, for the church "to reflect on the circumstances confronting migrants, including immigrants, refugees, children, and victims and survivors of human trafficking."

How are those who work with migrants and advocate for fair national and international migrant policies feeling about the New Year?

Sisters of Mercy Sr. Maryanne Loughry, associate director of Jesuit Refugee Service Australia and a research professor at Boston College's School of Social Work and Center for Human Rights and International Justice, told me earlier this week she sees more continuities than big changes in the coming year.

"Migration is a global issue that is not going away," said Loughry, who is also a research associate at the University of Oxford's Refugee Studies Center. 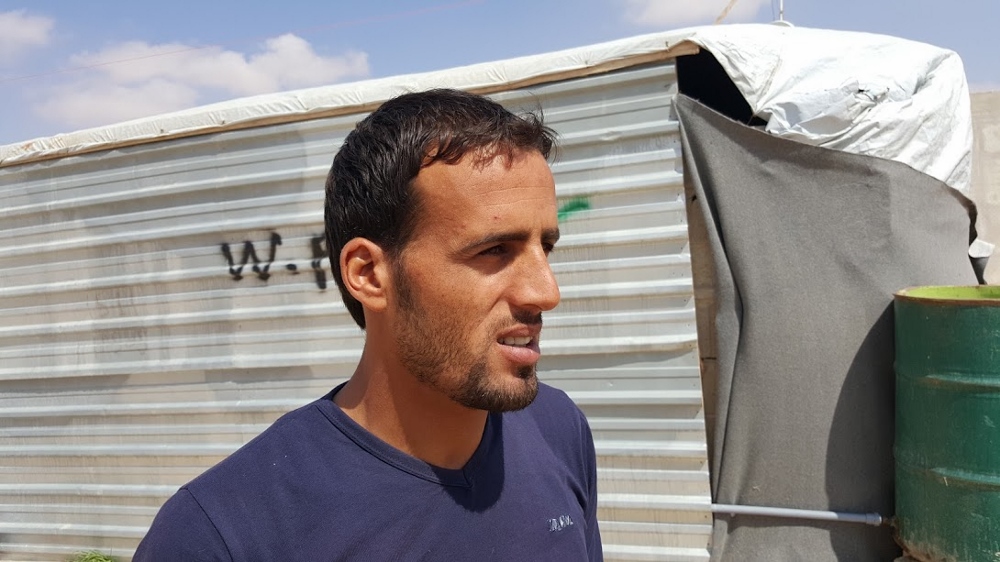 Abu Yousf has lived in a refugee camp for the past four years with his family. (GSR photo / Chris Herlinger)

The situation in Syria and the Middle East has shown us that nation-states don't have the mechanisms in place to respond to major migration crises and to protect those who are fleeing conflict and internal violence, she said.

"What people [who are fleeing] need is protection, and states don't have adequate resources in this area," said Loughry, who just returned from 10 days at the U.S.-Mexico border. A basic contradiction in the world today, she told me, is that globalization has made it easy to share capital and ideas but that "people still cannot cross borders with ease." The fear of terrorism has resulted in a kind of militarized response to border protection, and is harming those trying to flee poverty or wars and conflict. This is true in the Americas as well as in the Middle East and Europe.

While hailing the spiritual leadership of Pope Francis on the migration question and seeing hope for António Guterres, the new U.N. secretary-general who formerly headed the U.N.'s refugee agency, Loughry said the signs for solutions to migration problems in 2017 are not promising.

Though there is now a cease fire in place in Syria, the political situation that led to the conflict there has not been resolved, and the tensions caused by widespread migration to neighboring countries like Lebanon and Jordan have not eased.

When I visited Lebanon in March I met with Jesuit Fr. Tony Calleja, who oversees Jesuit Refugee Service's work in Lebanon. When I asked him at the end of the year how things looked for the region in 2017, he said no one can make any easy predictions. People in the region are "just hoping the ceasefire brokered recently holds," he told me in an email. 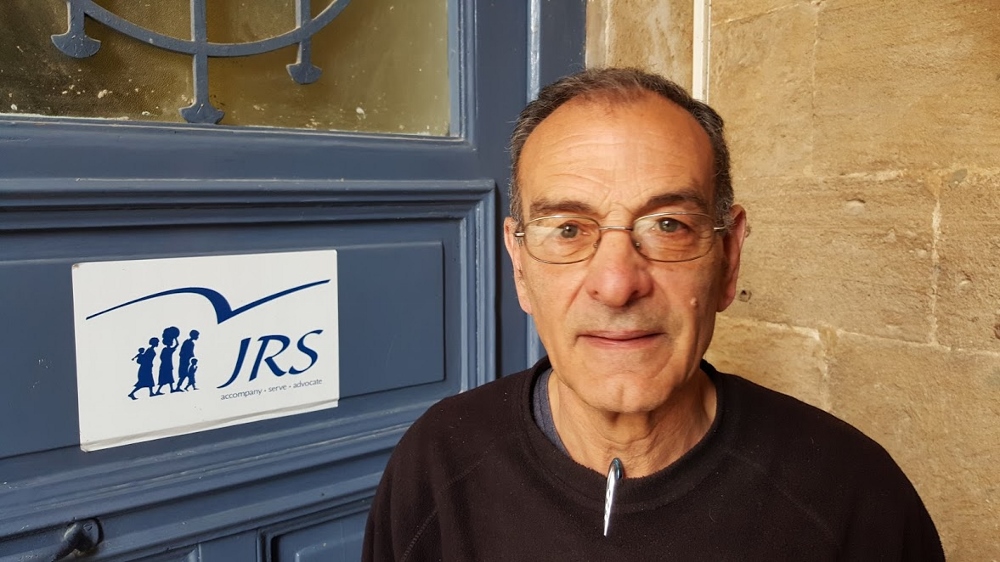 But Calleja added: "I don't see any of the 4 million-plus Syrian refugees going anywhere soon. This might create a situation where forced displacement which creates millions of refugees mutates into de facto emigration. People might start settling in on a more permanent basis or moving on to countries where they might have a future."

"For the rest, nothing much has changed," he said. "People are still struggling, coping or rather surviving as best as they can."

At the U.S.-Mexico border, uncertainty and pessimism are greeting the incoming Trump administration and its possible policies toward migrants.

"We just don't know what this is going to look like," Loughry said following the 10 days in late December and early January she and Boston College students spent in Arizona along the border, talking to border officials, migrant attorneys, migrants and humanitarian workers. "I would underline the feeling of uncertainty," she said.

Uncertainty is not holding back those who work at the United Nations. There is a feeling of substantial work to be done, as the year is expected to be one of "keeping our heads down and our noses to the grindstone," said Teresa Blumenstein, the executive assistant of UNANIMA, a U.N.-based coalition of Catholic religious congregations focused on concerns of women and children. 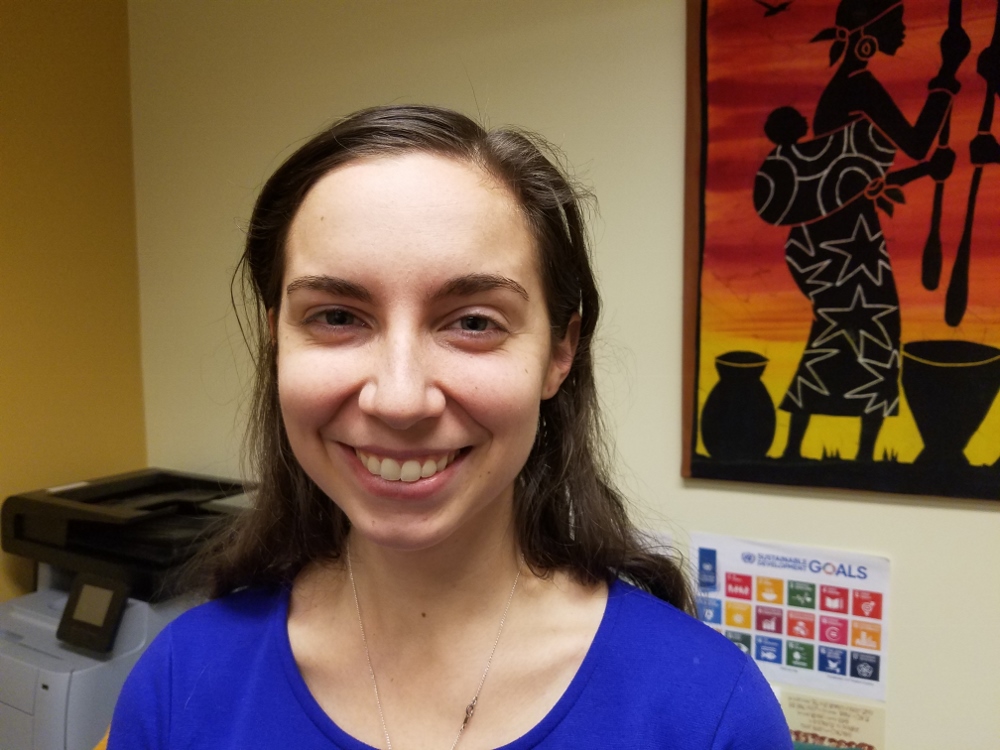 United Nations member states and non-governmental groups, like sisters' congregations, are working on developing international compacts on migrant and refugee rights, said Blumenstein, who is also executive committee member-at-large on the NGO Committee on Migration at the U.N.

Last year's U.N. summit on migration produced "The New York Declaration," which lays the ground work for the compacts the UN will work on this year, said Blumenstein. The commitments of the declaration include protecting the human rights of all refugees and migrants, including women and girls, regardless of their legal status. One other first-of-its-kind commitment would be ensuring that all refugee and migrant children are in school within a few months of their arrivals.

"This is huge, it's a priority issue," Blumenstein said of migration in general. Like Loughry, Blumenstein notes the worry and concern those who advocate for migrants have about the incoming Trump administration.

Of particular worry to Blumenstein is what the new administration might — or might not — do in the area of climate change. She and others are concerned that the administration might withdraw support or undermine the Paris Agreement, the 2015 international agreement on reducing greenhouse gases supported by the Obama administration.

Climate change is likely to become a critical part of part of the migration story in coming years, Blumenstein says, noting that experts believe raising sea waters near Bangladesh could displace 30 million people within a century. Elsewhere, the Kiribati islands in the South Pacific recently purchased land on one of the islands of Fiji for possible migration of its residents. "This is really unchartered territory," she said of climate migration, raising questions of refugees' "no return," and of issues of state sovereignty. "There is real reason for a sense of urgency." 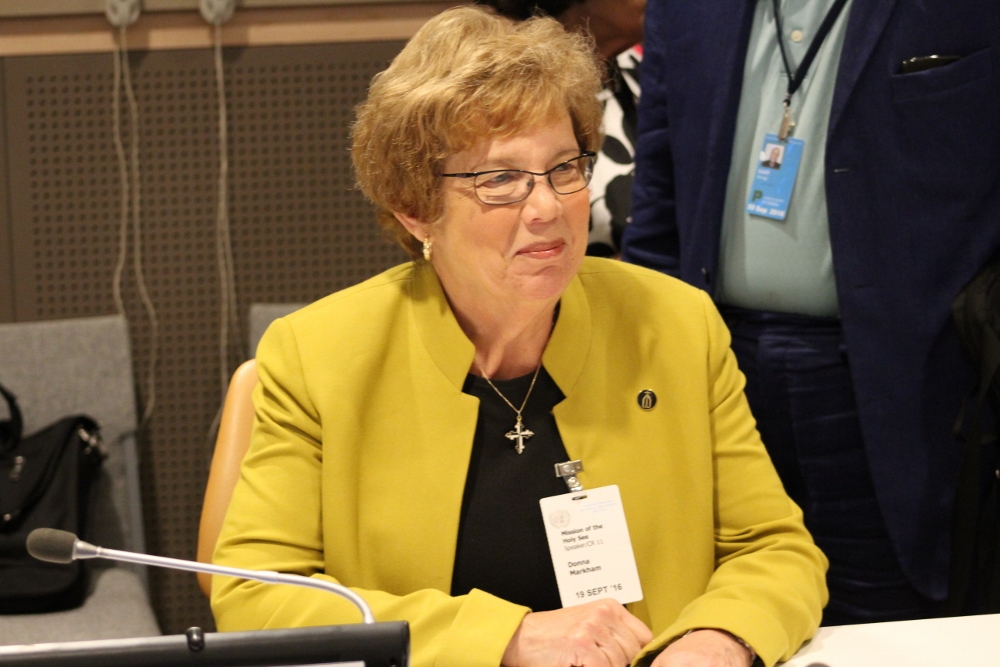 That sense of urgency also applies to biblical teaching and church tradition. Protecting migrants and refugees has a clear mandate, Blumenstein told me. "There is only one side to be on — the side of the migrants."

Dominican Sr. Donna J. Markham, the president and CEO of Catholic Charities USA, agreed. In an end-of-year email message she told me that, "Caring for the migrant and the refugee is inherent in the Gospel mandate to welcome the stranger and attend to our sisters and brothers in need, regardless of where they are from or what their religion may be."

Markham added that she realizes this is not always a popular position these days.

"Catholic Charities has been engaged in this sacred ministry for over 100 years and is committed to continuing this work regardless of any criticism that may be leveled against us."

Markham's message took me back to an interview in Lebanon. In a quiet greeting room of her congregation's mother house in Beirut, Sr. Nabiha Afif, secretary general of the Congregation of the Sisters of the Holy Hearts of Jesus and Mary, took in the sweep of history — the sorrow of Lebanon's war-dominated past and present — and acknowledged she is not overly optimistic by what she sees right now. 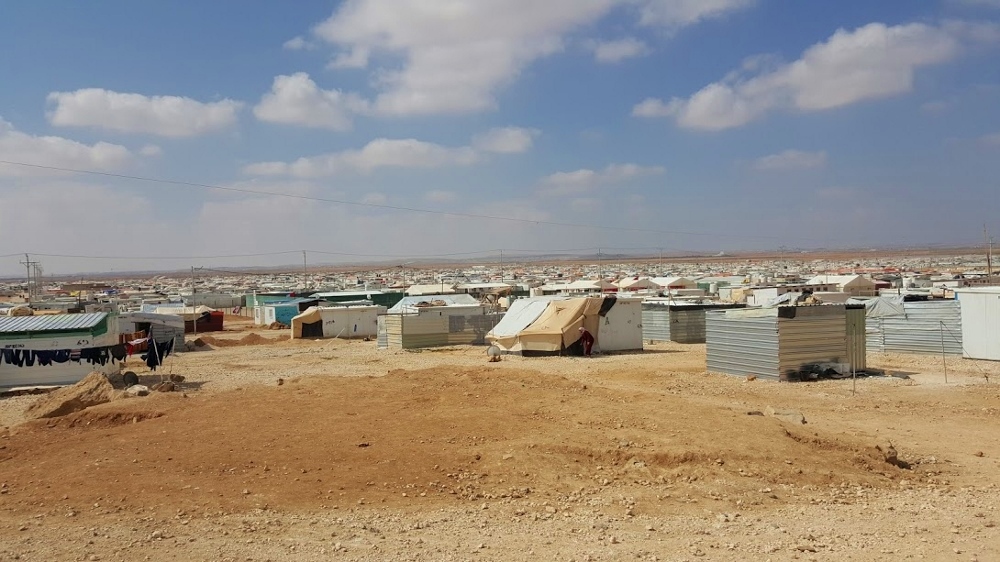 "The problems are very acute," she said. And yet, Afif, a social worker by training, was adamant about the Gospel mandate to assist migrants, regardless of religious or national identity.

"We are working with the human being," she said, "and that's the important thing."

Affirming common humanity. That's the needed focus for those working with refugees and on migration issues — and indeed for all of us in 2017 and beyond.

Migration | The state of the refugee in 2017

Advocating for porters in Ghana