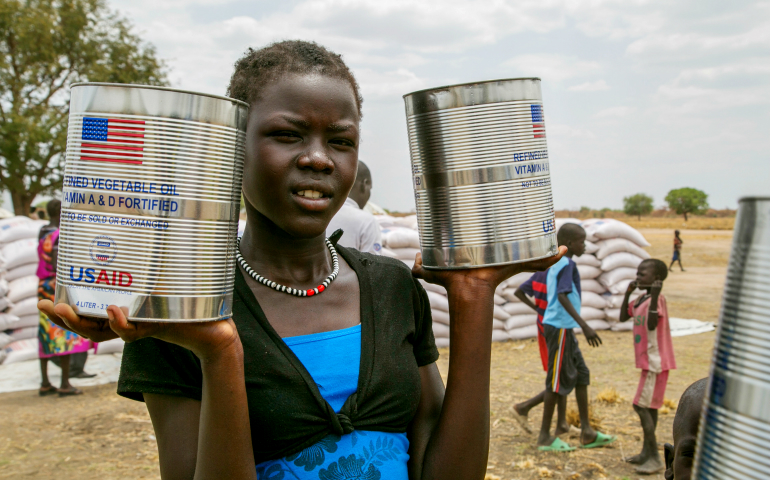 New York, N.Y. — The Trump administration is under fire on a number of fronts for policies and proposals Catholic humanitarian groups say harm the world's most vulnerable people.

In its budget proposal released March 11, the administration said it is seeking a 24 percent reduction to anti-poverty programs, as well as in funding for disaster and migration assistance. Even aid for programs focused on fighting HIV/AIDS, tuberculosis and malaria are on the chopping block.

"U.S. foreign assistance is a moral and practical imperative. Poverty not only causes unnecessary suffering, but also breeds instability. Aid empowers local leadership, builds local capacity and supports a community on its journey to self-reliance," O'Keefe said in testimony March 12 before the House Appropriations Subcommittee on State, Foreign Operations, and Related Programs.

One very specific instance of concern for CRS is the Trump administration's decision to terminate all humanitarian assistance to those living in the Palestinian Territories, including the Gaza Strip.

"Of the 1.9 million people in Gaza, 53 percent live in poverty and more than half — approximately 1.24 million — need international food assistance to survive," O'Keefe said. "The cessation of U.S. assistance has increased hopelessness and unnecessarily risks more regional instability."

Another challenge is in the Horn of Africa, where a drought and resulting crop failures have officials worried about the potential for increased hunger, even famine, in Ethiopia, Kenya, Somalia and South Sudan.

"We're very concerned by the deteriorating conditions in the region where we are seeing families — whose lives rely on the land — unable to cope," said Matt Davis, CRS' regional director for East Africa.

One feature of the proposed budget cuts is consolidating different foreign aid programs into a single humanitarian assistance fund, with funding that would amount to an overall drop from current levels, The Washington Post reported. The Trump administration is also proposing cuts to U.S. government-funded global health programs, from the current level of $8.7 billion to $6.3 billion, The Post reported.

The Post quoted the head of USAID, the U.S. government's main humanitarian arm, as saying the cuts have to be seen in the context of other countries doing more in providing foreign assistance.

"The U.S. will continue its role as the world leader in humanitarian assistance, but we'll also call on others to do their part, and we'll work relentlessly to assure that assistance is delivered as effectively and as efficiently as possible," said Mark Green, administrator of USAID.

Foreign aid is always a tricky topic, especially in this moment of "America First" politics. We Americans tend to think of our country as generous to a fault — perhaps too much so.

But the reality is far more complicated. As the Council on Foreign Relations notes, it is true that the United States is "by far the largest single foreign donor. It outspends the next largest, Germany, by more than $10 billion a year; the United Kingdom, Japan, and France follow."

However, the council points out that, as a percentage of a country's gross domestic product, U.S. foreign assistance lags behind the rest of the world.

"U.S. aid spending ranks near the bottom of all developed countries," the council said. "It accounts for 0.18 percent of GDP, twenty-second out of twenty-eight countries measured by the Organization for Economic Cooperation and Development (OECD). Sweden, Luxembourg, Norway, Denmark, the Netherlands, and the United Kingdom all spend 0.7 percent or more of GDP on foreign aid, which is the target set by the United Nations." 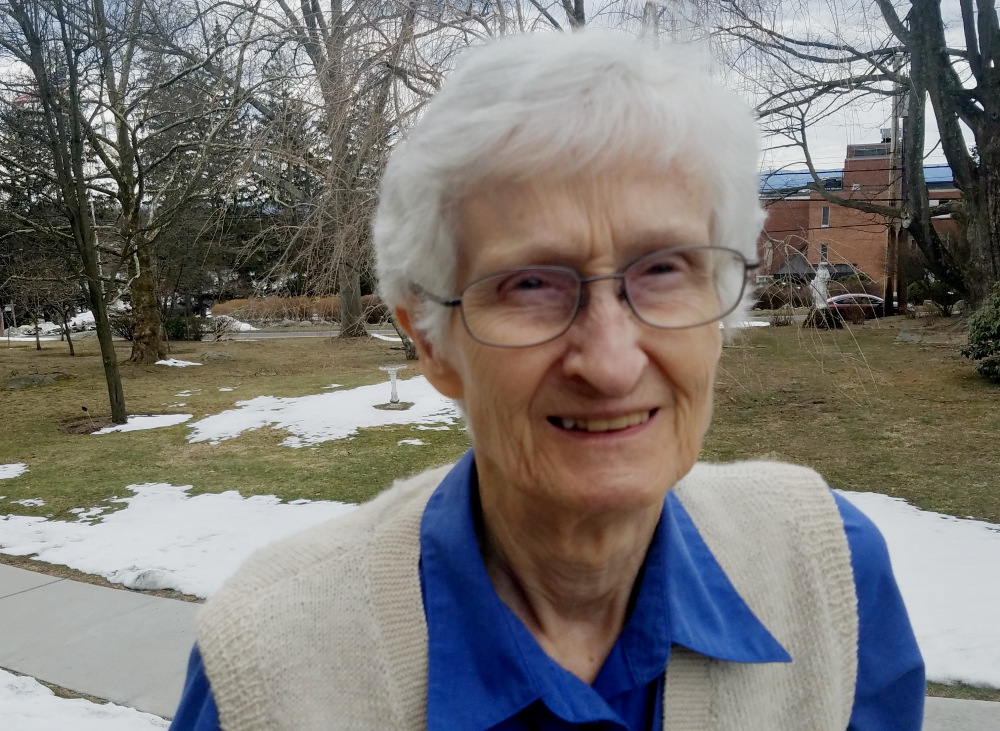 Maryknoll Sr. Jean Fallon: "We need to look as a nation to our obligations and reach out to help people — especially since we are a rich nation. The U.S. government is obliged to help people in desperate situations. They need help." (GSR photo / Chris Herlinger)

Maryknoll Sr. Jean Fallon, a longtime peace activist who worked as a missionary in post-war Japan, from 1951 to 2001, told me that CRS' worries about potential cuts in U.S. foreign aid "should raise a warning red flag for us all."

"The United States has become too insular and I'm worried about that," said Fallon, who is also former associate of the Maryknoll Office for Global Concerns at the United Nations. "The U.S. has developed "an island mentality that only sees 'us.' "

The potential for foreign aid cuts, Fallon said, "certainly darkens our future. At this moment in our history, we need to look as a nation to our obligations and reach out to help people — especially since we are a rich nation. The U.S. government is obliged to help people in desperate situations. They need help."

The example Fallon follows, both as a onetime missionary and as a U.S. citizen, is the ministry of Jesus. "As missioners, we felt that — the need of reaching out to people."

She added, "It's the understanding of an obligation of caring for others as you would care for yourselves."

Those sentiments are echoed in the CRS statements.

"We are concerned the administration's budget could abandon millions of families around the world just when they need help the most," CRS' Davis said. "Helping the poor is a moral imperative, and a wise investment in global stability."

'We must look beyond our borders'

CRS and another prominent Catholic entity, the U.S. Conference of Catholic Bishops' Committee on Migration, issued a joint statement last week that backs up an earlier statement by bishops who live and work along the Texas-Mexico border. The Catholic groups are opposing a new Trump administration policy requiring asylum seekers to stay in Mexico while awaiting "protection in the United States."

The March 13 statement by Bishop Joe Vásquez, of Austin, Texas, and Sean Callahan, CRS' CEO and president, urges the U.S. government to reverse the policy, which they say "needlessly increases the suffering of the most vulnerable and violates international protocols. We steadfastly affirm a person's right to seek asylum and find recent efforts to curtail and deter that right deeply troubling."

They add: "We must look beyond our borders; families are escaping extreme violence and poverty at home and are fleeing for their lives. Our staff and partners in Central America witness the suffering there and fight against it.

"Our government must adopt policies and provide more funding that address root causes of migration and promote human dignity and sustainable livelihoods. Like the Texas-Mexico Border Bishops, we recommit to Pope Francis's call to welcome, protect, promote, and integrate our immigrant brothers and sisters in Christ."

Women religious find a place of honor on Mother's Day