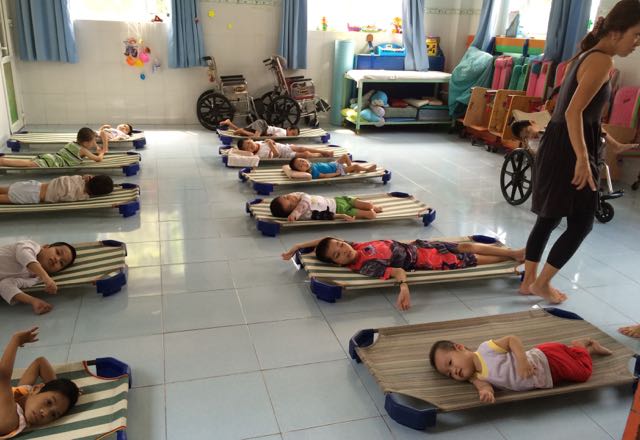 Ho Chi Minh City, Vietnam — Most of the 65 youngsters at Thien Phuoc, a center for children with severe disabilities on the outskirts of this sprawling city, can neither walk, talk nor feed themselves. Most communicate by thrusting their arms and legs as they vocalize sounds to express themselves to draw attention.

Each was born with a severe physical or mental handicap – or both. Nearly all were orphaned early on. Parents who can barely provide for themselves and their families often find it impossible to raise a child with a severe disability. It’s not uncommon to drop such an infant off at an orphanage and disappear. In other cases, parents seek whatever help they can find in a country with highly inadequate social services.

The children at Thien Phuoc, translated meaning “heavenly fortune,” are, indeed, fortunate. They have somehow made it to the center and will receive care for the duration of their lives.

Initiated by a Vietnamese Catholic priest in 2001, it is run by a Vietnamese Catholic sister, Lover of the Holy Cross Sister Kim Chi, (she asked that her family name not be used). Kim Chi leads a staff of 15 full-time workers. She also coordinates scores of volunteers, both foreign and local, who come to the center on a regular basis to help out. Much individual attention is required, and it takes considerable planning and attention to details to pull it off, says Kim Chi who has worked at the center now for 10 years. 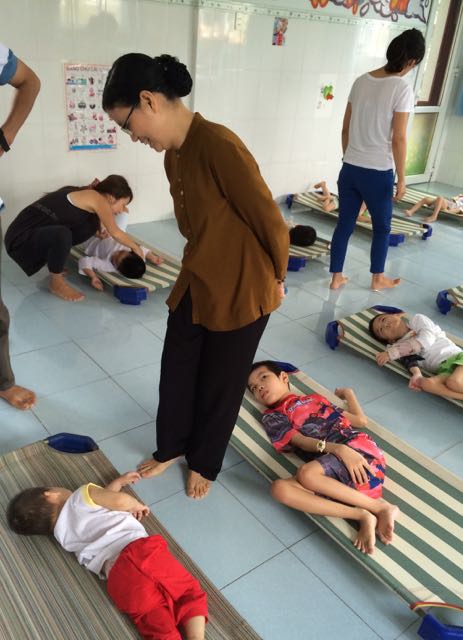 Sr. Kim Chi with one of the resting children. (Tom Fox)

Thien Phuoc is located on a narrow street off a main artery filled with heavy traffic moving in and out of the city. It’s well off the main road, and the atmosphere inside is quiet and calm.

One room has exercise equipment along the walls; another room is padded so the children can move within it without injuring themselves; yet another is open and provides a breezy environment for naps and sleeping at night. A kitchen keeps the meals coming. A medical office allows volunteer physicians and nurses to check the children who are frequently taken to local hospitals for more serious care. Sr. Kim Chi says a lot of her time involves visiting the children at the hospitals.

The center also has small dental room. A Teddy bear sits in a dentist chair when it’s not in use. It serves to lessen anxieties a visitor is told.

Files at Thien Phuoc list the names of each child and their individual disabilities: Some include epilepsy, cerebral palsy and Down's syndrome. But there’s more, since the causes of some of the more severe birth defects cannot always be known. 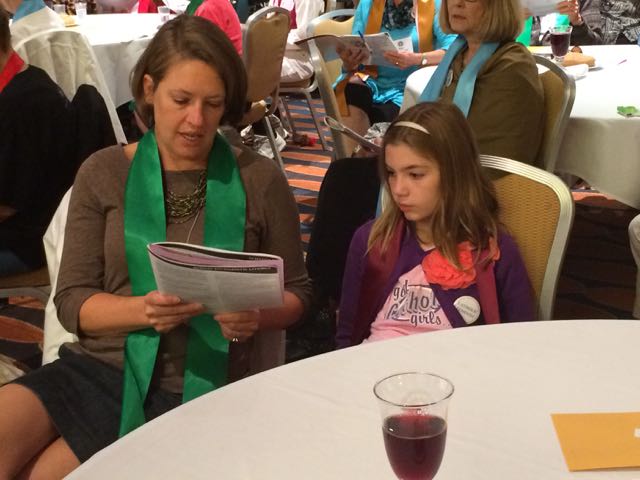 The children, many of whom cannot leave their canvas mats by themselves, require daily massage and stretching in order to maintain muscle mass. (Tom Fox)

Kim Chi tells a visitor that poor maternal health and education cause some of the birth defects she sees. She also mentions endemic poverty.

What she is less willing to speak about is the highly charged issue of chemical toxins in the environment. It’s an explosive subject and, frankly, providing adequate care is what this Catholic sister is all about.

But others discuss causes to this day and link birth defects to a U.S. military program during the Vietnam War. From 1961 to 1971, American forces sprayed nearly 20 million gallons of the chemical defoliant, Agent Orange, over Vietnam, Laos and parts of Cambodia. Some areas around Ho Chi Minh City were heavily defoliated.

Vietnam's Red Cross has stated that as many as 3 million Vietnamese have been affected by Agent Orange, including at least 150,000 children who are said to have been born with birth defects related to the chemical.

The exact or even approximate number of such birth defects cannot be known. Records are simply inadequate, and connecting the chemical with birth defects moves from science to politics in both Hanoi and Washington. 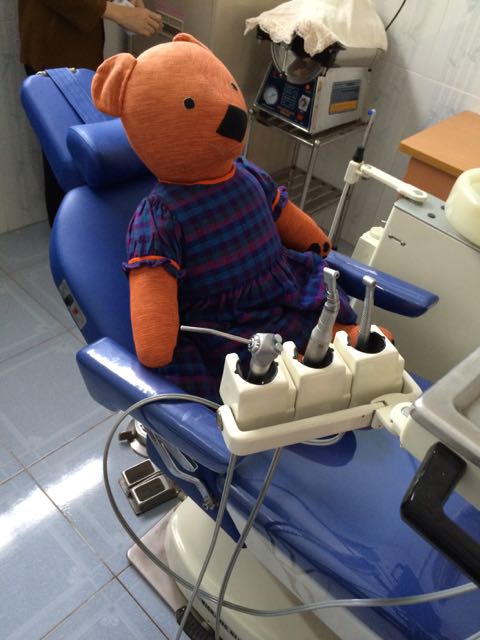 Much work has been done detailing the connections. Clearly many thousands of children have been born with Agent Orange-related conditions, but knowing whether any given child is such a victim is more difficult to establish.

Pressed by a visitor’s question, Sr. Kim Chi does not want to get drawn into the debate. Instead, she simply says that many of the children at the center come from areas that were once heavily defoliated by U.S. planes. She leaves it at that.

I asked Sr. Kim Chi where she finds her energy.

This is a woman motivated by gratitude. 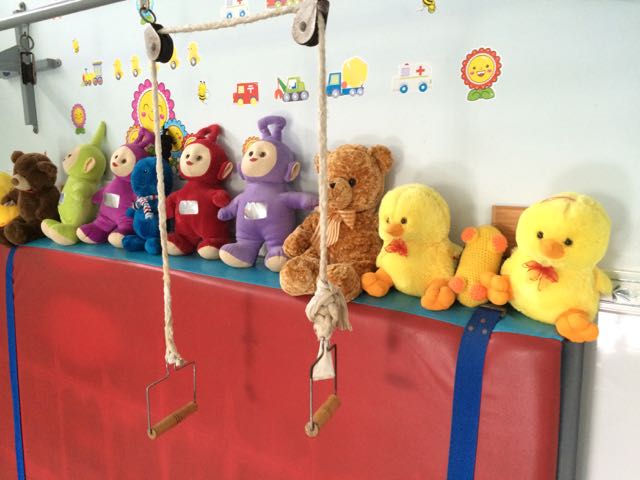 Thien Phuoc was relatively quite at 10 in the morning. The children had been up for hours, had eaten breakfast and had had their morning exercises and were now taking naps. Only a few were asleep, though. Almost all were resting on cots on the floor.

Sr. Kim Chi says it costs $3,000 a month to run Thien Phuoc. Money comes to the center mostly from donations by nonprofit organizations and some private donors. But that’s just to pay the staff and electric bills.  Kim Chi gathers donated food to feed the children.

Most volunteers come once a week for several hours at a time. They work with the children, providing forms of physiotherapy. The children, many of whom cannot leave their canvas mats by themselves, require daily massage and stretching in order to maintain muscle mass. Volunteers also read stories or play games. Sometimes simple touch acts as a form of therapy.

“We encourage volunteers and visitors to come and meet with the children, and learn about how one lives with a disability,” Kim Chi said. “We organize as many stimulating activities as we can.”

Lovers of the Holy Cross date back more than 300 years in Vietnam. Caring for the needy has always been one of the community's central charisms. 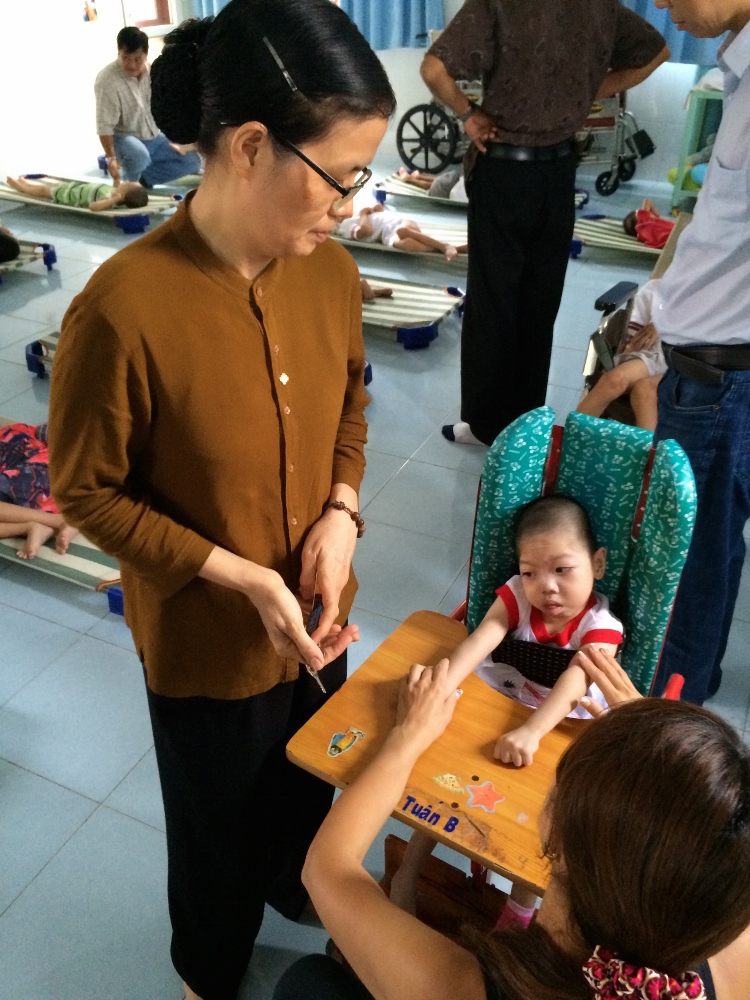 [Tom Fox is director of Global Sisters Report. He can be reached at tfox@NCRonline.org.]