Christmas and New Year holidays always inspire stories and memories, and among those my family shares are of a family friend, the late Sr. Mary Lucy Downey, a member of the Sisters of Charity of Leavenworth, and a hero to those championing the cause of affordable housing in my hometown of Denver, Colorado.

Downey has been on my mind a lot in the three years I have been on the staff of Global Sisters Report. She was the first sister I ever knew, and I have been gratified to find that Downey's memory is kept alive by sisters I have met not only in Colorado and in Kansas City (the home of GSR and National Catholic Reporter) but even at the United Nations, where one or two sisters I have met knew of her work.

Downey was a trailblazer, most notably during her 22-year career with Denver's Archdiocesan Housing. For 16 years she served as the agency's executive director.

The archdiocesan agency — now an affiliate of Catholic Charities — provides affordable housing to those in need, including, it says, "those who struggle with homelessness, seniors, those who are disabled, families, and workforce households." The agency owns and manages more than 1,700 housing units in Colorado and in neighboring Wyoming.

Downey knew and worked with my late father, David Herlinger, whose career as director of agencies charged with funding affordable housing in Colorado coincided with Downey's work. Downey and my father worked together on housing projects when he was director of an agency called Colorado Housing, Inc. Dad, a parochial school student in 1940s Pittsburgh, greatly respected Downey for her work. But he also liked her because of their shared "Catholic connection" and the fact that, to him, she seemed so different from the "stern sisters" he had known growing up.

Downey was in many ways emblematic of the sisters who discovered and embraced new freedom and responsibilities following Vatican II.

"She was ahead of her time," said Sr. Mary Lyons, 75, who first knew Downey as a teacher at Immaculate Heart of Mary School in Kansas City, Missouri, when she was a student. Lyons later worked with Downey in Denver, where she still lives.

The idea of a "housing ministry" began in the early 1970s with growing associations between groups like Archdiocesan Housing and the U.S. Department of Housing and Urban Development, or HUD, which funded housing projects like the ones the Denver Archdiocese built.

Downey's commitment "to be sure that people had a decent place to live" was unflagging, Lyons told me recently. "She was fearless."

I was probably 10 or 11 when I first met Sister Lucy — everyone called her Lucy or Sister Lucy — and through work associations with my father, she became a family friend who occasionally babysat my brother Matt, sister Becky and me.

Downey would sometimes take us to her apartment — she lived with two other sisters, I think — and we would pepper her with questions about her rosaries, family photos and the framed portrait of Mother Xavier Ross, her congregation's foundress. The apartment was small, cozy and quiet — I can still remember how still it felt.

I have other warm memories of Downey. She was unfailingly kind and caring, especially to children; she spoke with a soft voice that made people listen to what she said; she had an infectious laugh; she was always impeccably dressed; and that she had what seemed like infinite patience. Downey took it in stride when Matt got sick in her car — a VW Beetle, as I recall — after she, God bless her, indulged him in too much candy and soda during back-to-back matinee viewings of "Willy Wonka and the Chocolate Factory."

I had just turned 32 when Sister Lucy died, unexpectedly, of a heart attack, at age 60, in December 1992. I remember that hundreds — fellow sisters, bishops, maintenance men, mothers with small children — turned out for her funeral service at the Cathedral Basilica of the Immaculate Conception in downtown Denver.

I didn't know much about Sister Lucy's life other than the basics: Born in 1932, she came from modest beginnings – she was a miner's daughter – who had grown up in an Irish-American enclave in Butte, Montana. I later came to know that she worked as a teacher at Catholic schools in Kansas, Missouri, Montana and Colorado, after professing her first vows in 1954.

Members of her congregation who live in Leavenworth and knew her from the earliest days of her ministry have equally warm memories of their late friend and colleague.

"She never met a stranger," said Sr. Susan Pryor, 88, who knew Downey during the Kansas City days as a teacher. "I still miss her."

Pryor recalls "good times" laced with humor, like the trip Downey and Pryor took to Europe in the summer of 1978. Downey, who "didn't like to be left out of anything," tried to learn how to drive a stick-shift. It didn't take, as Pryor recalls. "I told her, 'You just navigate and keep us on track.' "

Sr. Paula Marie Tweet, 81, grew up in Butte and knew Downey as the principal at Immaculate Heart of Mary in Kansas City when Tweet was a teacher. Tweet thinks Downey's empathy with the poor may have stemmed from her own family experiences — Downey's father died at a young age, leaving her mother to raise six children.

When Tweet visited Downey in Denver, the two sisters would take in garage sales, and Downey always sought out things for those living in the housing units. "Dishes, chairs — things they might be able to use," Tweet said. "I have very fond memories of that. Lucy was always thinking of others."

Sr. Anita Sullivan, 86, who grew up with Downey in Butte, said "there was always something very special about Lucy," and that she and others in the congregation followed Downey's career with great interest. "I was darn proud of her," Sullivan said.

But in one sense, maybe Downey's career was not a surprise, given her roots in a mining town. "With all of that charm, you still had to have some toughness," Sullivan told me. "She was raised in a tough community. You lived through strikes. We all grew up a little tough."

That inner toughness proved helpful. Downey had no model for her work in "housing ministry."

"There was no precedence for what she was doing — no guide," Sullivan said.

But Downey's administrative acumen as a school administrator caught the eye of the Archdiocese of Denver. The match proved smart. Auxiliary Bishop George Evans, Downey's boss for a number of years, "would have done anything for that woman," Lyons said.

A December 1988 article in the Denver Catholic Register, a diocesan newspaper now called the Denver Catholic, quoted Downey as saying that she loved teaching but also welcomed a new challenge. "I asked Bishop Evans, 'What do I do?' He said, 'I don't know. We haven't done it before. But I want you to witness to the Church's concern for the poor.' And that's the only job description I ever had."

Under Downey's leadership, buildings not only went up, but programs expanded. This included an "adult day care" program providing meals and social activities for senior citizens living with younger family members who needed a place for elderly family members to stay during work hours. "It allowed families to stay together rather than putting seniors in nursing homes," Lyons said.

"She was a good, good woman who, by the way, worked for a stipend," Lyons said, noting that Downey at the end headed what was, in effect, a "multimillion-dollar corporation."

Now Archdiocesan Housing, which marked its 50th anniversary in 2018, serves about 3,145 residents in 29 properties.

After winning HUD funding for a housing project, Downey told Sullivan, "Can you believe this kid from Butte, Montana, just got $2 million from the government?" Sullivan recalled. "She had gotten into the big leagues."

Even so, Downey kept things grounded and centered. Working at Archdiocesan Housing "felt like a family" under Downey, and "firings were rare," said Lyons, who held a number of managerial positions with the agency and retired last August after 36 years.

Lyons resided with Downey for the last seven years of Downey's life. "I lived with my boss. That's not easy, but when we got home, we didn't talk shop. We did our chores."

The night before Downey died in her sleep, Lyons said, they hosted members of Downey's family visiting Denver for a pre-Christmas turkey dinner. Downey was still recovering from an automobile accident earlier in the year. But that night, Lyons said, Downey "looked like a million bucks."

Though Downey's legacy lives on, Lyons told me Downey's work in Denver is best seen in the larger context and history of the Sisters of Charity of Leavenworth who "came in covered wagons" and founded institutions still going strong in Denver, including St. Joseph Hospital.

In the end, many sisters have made their mark on Denver, and Downey would be proud that her work was part of a collective effort.

Still, though she might blush at the praise, I hope Downey wouldn't mind to hear what her friend and former colleague told me as she walked me to the door of her Denver residence last week.

"You know, there are maybe one or two people you meet in life who really know how to bring out the best in people," Lyons said. "Lucy was one of those people." 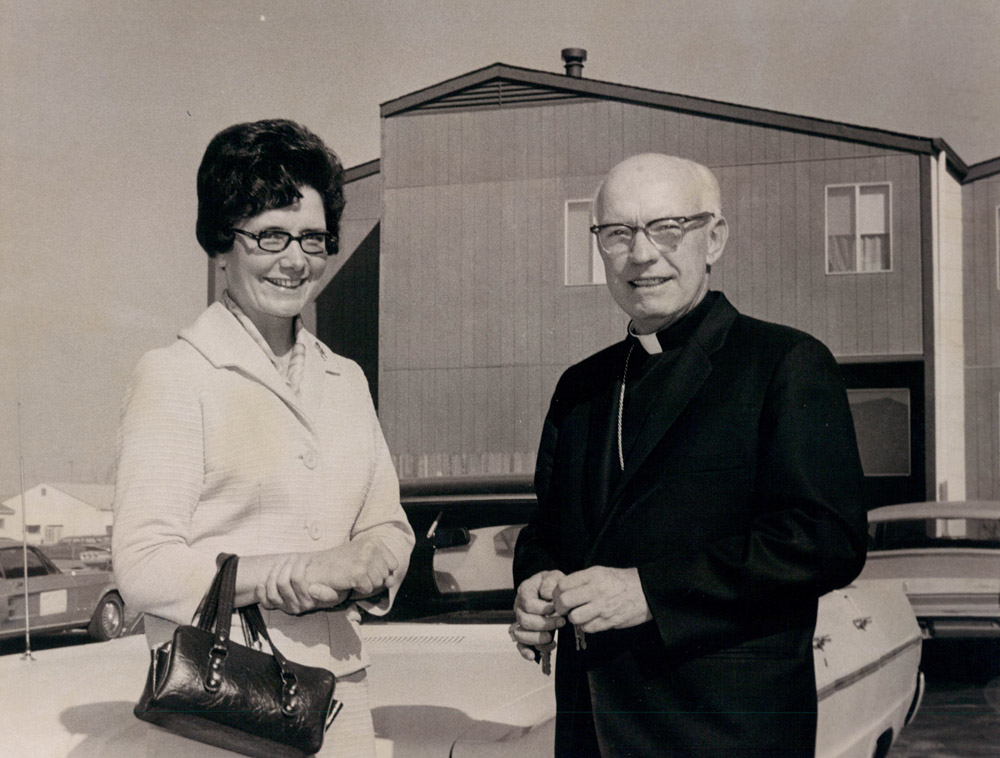 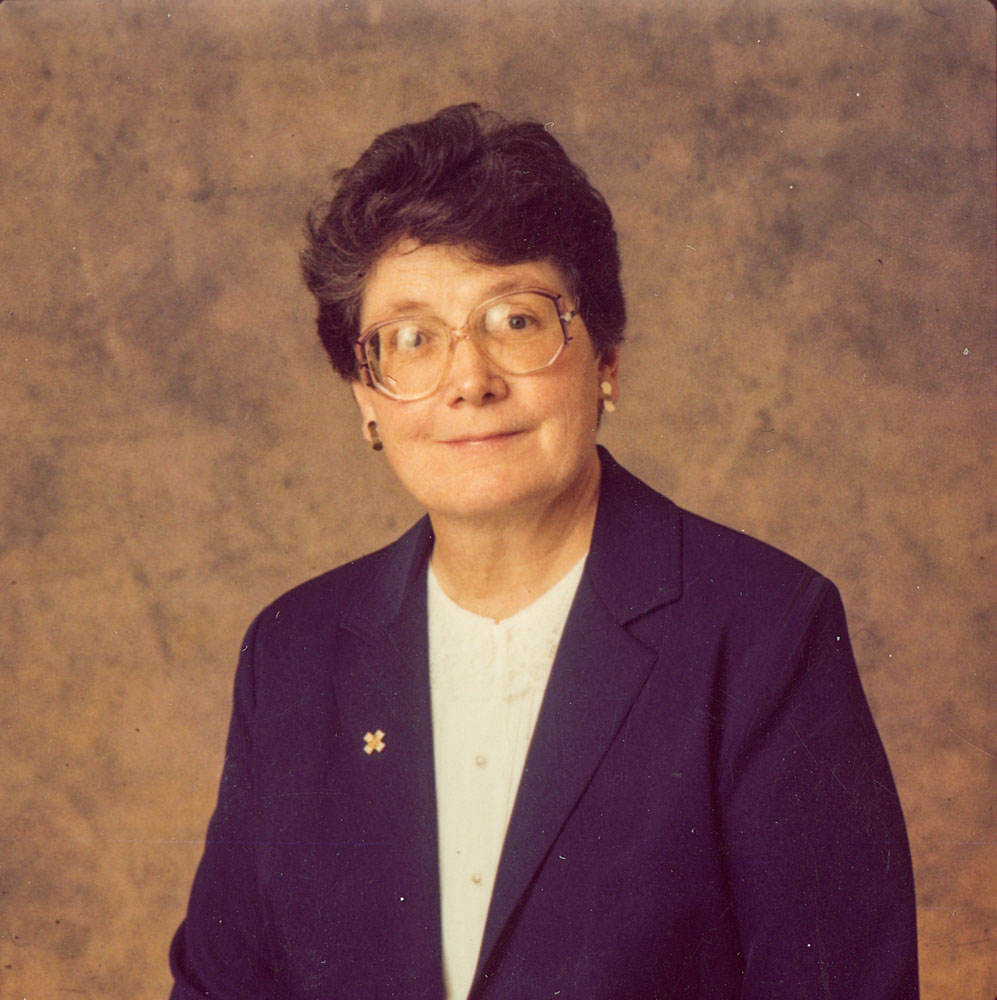 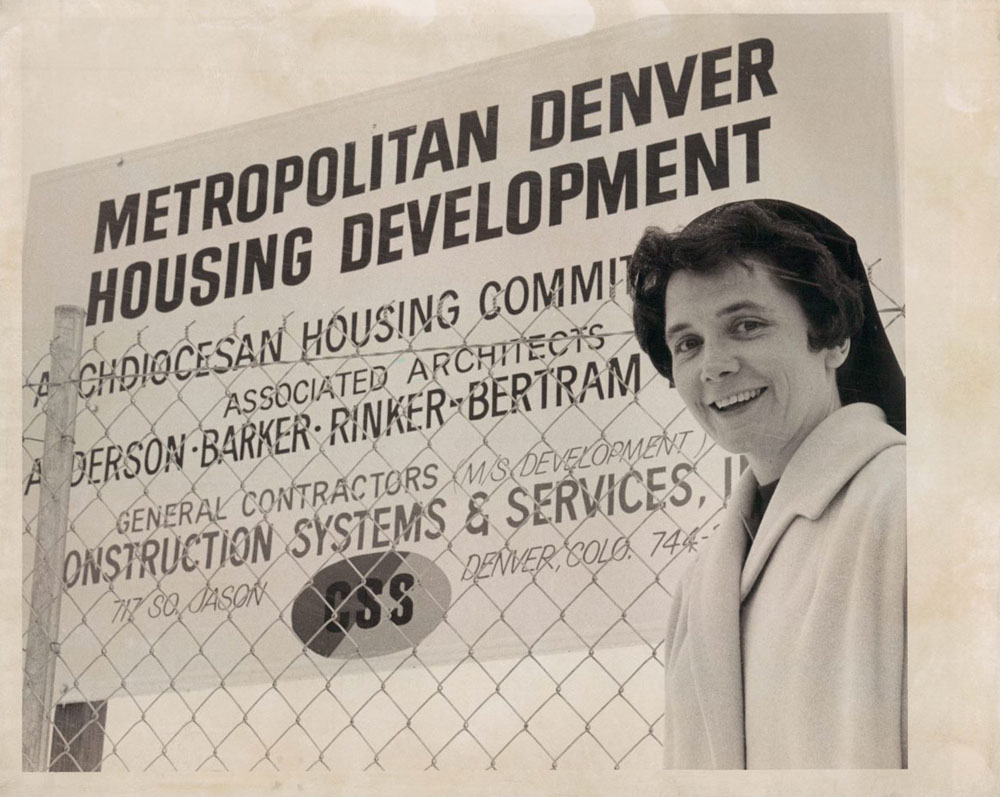 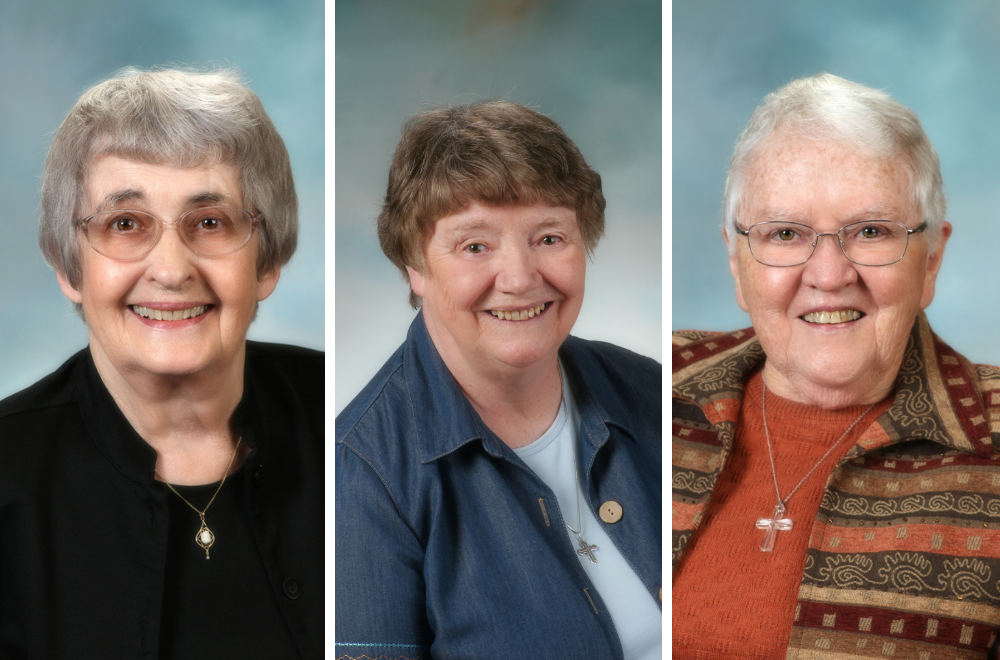 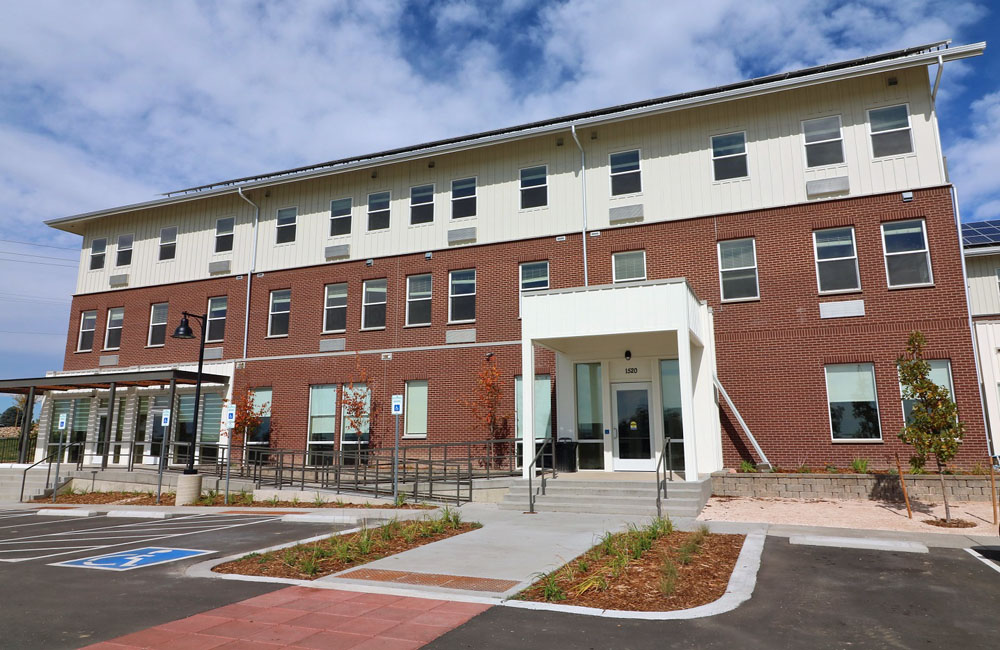 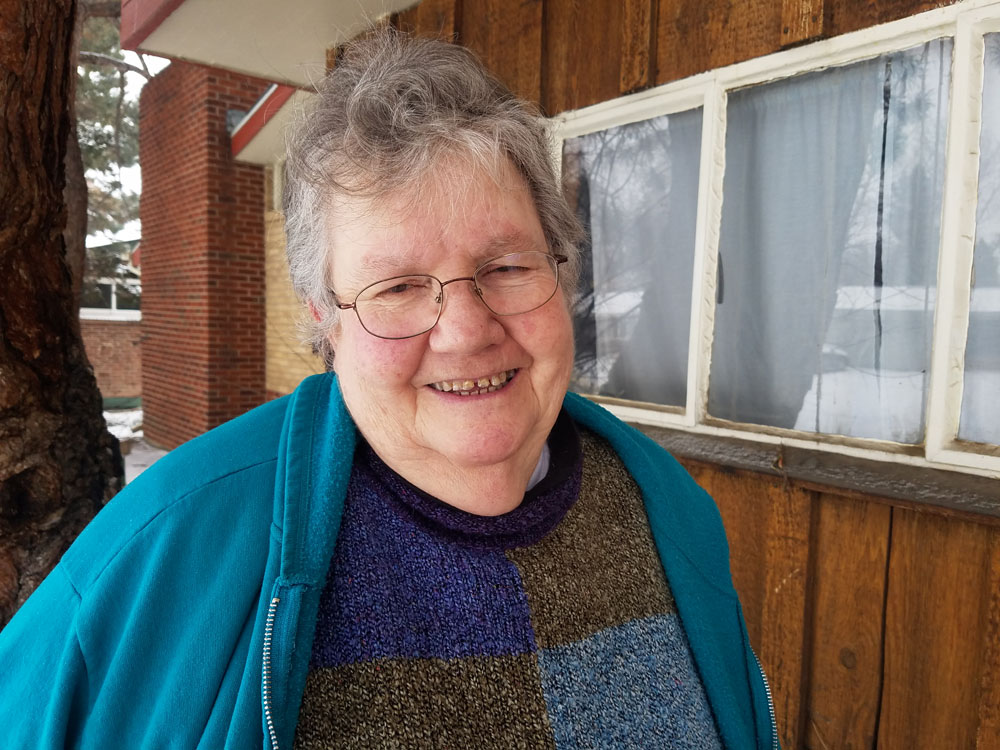 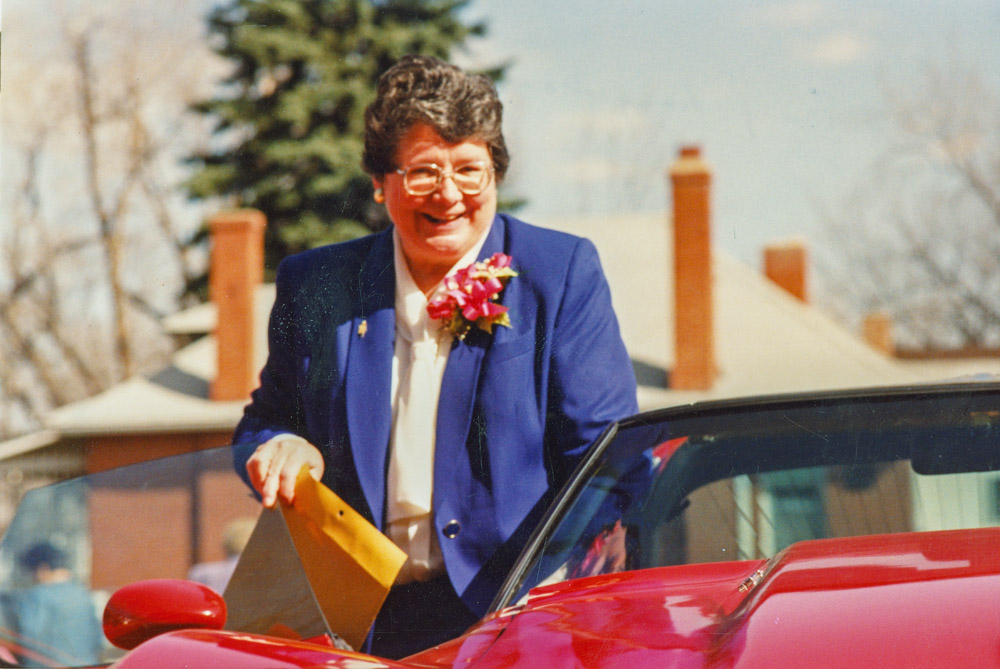