by Tracy Abeln
Ministry
This article appears in the Iraq feature series. View the full series. 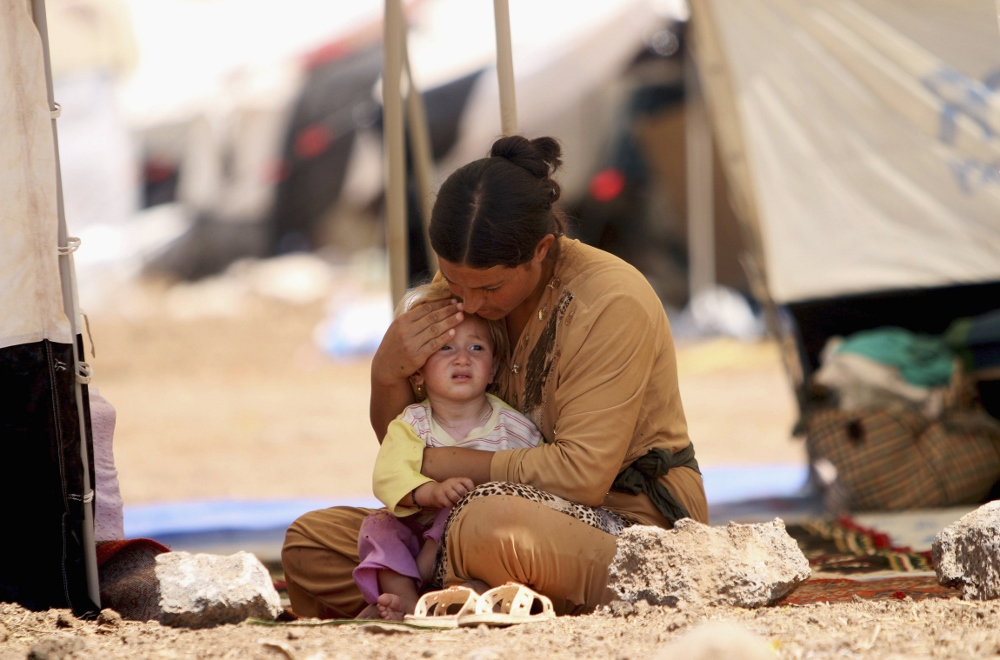 A woman who fled the violence in the Iraqi town of Sinjar sits with a child inside a tent at a camp in Syria's northern town of Qamishli Aug. 17. Returning from a visit to the Kurdish region of Iraq, Syriac Catholic Patriarch Ignace Joseph III Younan cal led the Islamic State invasion "pure and simple religious cleansing and attempted genocide." (CNS photo/Rodi Said, Reuters)

Editor’s note: The Dominican Order reports that many people have contacted them, asking how they might send help to the suffering people of Iraq. “Help can be sent through the Province of France which will ensure that it is used to help communities still in Iraq as well as Iraqi families who are already refugees elsewhere. Contributions should be identified as ‘For Iraq.’” Please click here for the bank information for the Province Dominicaine de France.

It is difficult to read of others’ difficulties, but bearing witness to the suffering of those in war-torn regions, be it South Sudan, the Ukraine, Gaza, Somalia, or the Iraq-Syria region, is the duty of journalists. In the earliest pages of National Catholic Reporter, for example, there are accounts of the horrors of daily life for the people of Vietnam during the 1960s and ‘70s. When I read them, I am struck with how unique those details seem; the history books don’t cover such day to day activities, the ground-level consequences of political policy. When I read those articles today, the parallels with what is happening today are too obvious – but I am glad these stories were preserved.

Global Sisters Report shares plenty of good news – stories of sisters acting out the Gospel, bringing education, relief and empowerment to children, the elderly and the poor; and sisters sharing deep reflections on the state of religious life, the Catholic church, God.

But we feel obligated to present the other side, too.

We hear from the people with Solidarity with South Sudan and bring you their words when we can. We likewise have been getting letters from U.S.-based Dominicans, who receive reports from their counterparts in Iraq. The last missive posted on their website is from August 23.

This plea from Fr. Bruno Cadoré, OP, calls on world leaders for action.

Here is what the Dominican Sisters of Saint Catherine of Siena-Iraq sent to Charles W. Dahm, O.P. in Chicago, dated August 30:

We entered the fourth week of displacement. Yet, there is nothing promising at all. The Iraqi government has not done anything to regain the Christian towns back from the IS [Islamic State]. Likewise, the Kurdish government, apart from allowing us to enter their province, has not offered any aid, financial or material, leaving us in the streets, and making the church take full responsibility of us all. Thanks to the Church of Iraq in Kurdistan, who opened their halls and centers to provide shelters. Yet, the number of refugees was so large that the Kurdish government had to face the stark reality and open their schools to provide additional shelter for refugees.

We hear a lot about world governments and organizations sending financial aid to Iraq, but the refugee gets the least – we do not know or understand why. People lost almost everything; they cannot even afford to buy milk or formula for their children. What saddens us most is that, only one month ago, these people were the most educated in the country and among those most likely to build a life for themselves and their family, and now they do not have enough money in their pockets to survive the day. Christians became accustomed to investing their money in businesses, shops, fields, buildings, etc. to build their communities. Leaving their towns meant leaving everything they had been working for all their lives.

Yet, amidst losing everything, accepting their lost dignity, is the most difficult loss they may experience. Some have found shelter in tents, others in schools, still others in church halls and gardens. They wait to be fed, or given food to cook; elderly are not being taken care of properly; children are living in unhealthy conditions; families have lost their privacy; women are exposed in these places; men have no jobs in a culture where a man is expected to support his families. Refusing to live without dignity, more and more people think of immigrating. Whoever owns a car or gold, sells them to buy a plane ticket out of the country. Needless to say, the buyers in Kurdistan are taking advantage and do not take into consideration the devastation these refugees face.

Christians in Iraq are known for their faithfulness and peaceful way of living among others. They do not believe in violence or in war as a way to solve problems. Now, they feel that they are victims because other religions and political parties are dividing the country on the account of the innocent.

Of course, none of us is a political analyst, but it is obvious that Kurdistan is the only beneficiary: economically, militarily, and provincially, while they were obliged to protect the Nineveh Plain. The Peshmerga pulled out of the plain of Nineveh in no time, without a clear reason, and without warning the civilians; we knew we were living in a war zone, when we trusted that at the very least, in a time of danger, they will warn us but, did not – so how can we trust them now (government and people)?

We still wonder why the world cannot petition the U.N. to take serious action toward the IS, and save the people from their misery, knowing that the IS is the most dangerous group in the world. Is the world deaf and blind? People are almost convinced that the only way out of this crisis is to immigrate and leave the country, if it is even possible.

It is certain, many have reached their breaking point and despair is setting in. Maybe immigrating is the only way to stop living in such a catastrophic humanitarian crisis. People cannot endure this persecution, marginalization, contempt and rejection anymore. If there is any other way, besides immigration, please let us know. Otherwise, please help people get out of the country, by seeking asylum, according to the U.N. law.

If you can bear a little more, here is a recent email from Sr. Luma Khuder, OP, who writes about Sr. Marie Hanna’s  struggle to save her family and others two weeks ago:

In an earlier letter it was mentioned that one of our Dominican Sisters went to fetch her parents from the bank of Al-Khazir River. Receiving a call at 6 a.m. on Friday morning the 22nd from her elderly parents, she learned that they were forced out of Karakosh with her blood-sister. A car drove her with her nephew from Ankawa to the last checkpoint leaving Erbil. After that they had to walk for miles to arrive to the river bank; they were lucky that her sister still had a cell phone with her, unlike other people in the caravan. She had to cross two sand ramps that separate Kurdistan from Nineveh Plain. These ramps have been put in the past weeks for protection.

Eventually, she found her parents in very bad condition. Her sister was the rod that supported her parents. Upon seeing her parents she learned from her mother that there was a woman and her husband behind on the ground and the man was about to die. There were even three dogs waiting for them to die. Sr. Hanna gave them some water, and put them in construction carts that they found nearby. They pushed them all the way to Erbil checkpoint where there was a car waiting for them as Sr. Hanna had called a priest asking for water and help. It took her seven hours to go and bring her family back.

We are enormously proud of our sister, Hanna, and thank God for her courage. On the next day, when Sr. Hanna was able to tell her story, it was very sad to see her so overwhelmed because of the horror that she experienced. It was devastating for her that she could not help more people because it was already after 10 p.m. and it was too dark for anyone to go and search for people. She came back hoping that she will be able to go back the next day (Saturday) and help the rest.

On Saturday there was no sign of where the others were. However, people did not give up. A relative of one of those who were lost asked Muslim friends in the area to look for them, but they could not find them until Sunday morning the 24th. When they found them they took them to a house and fed them. They had been without food for two days and they were drinking water from the river while they were lost. The Muslim men who found them were able to connect with the families of these people and guide them to a village called Jamacor to find people. They arrived to Ankawa-Erbil safe on Sunday at 2 p.m. They lived two horror nights in the open. Dogs and wolves were watching them all night, and the youngest among them (65 years old a brother of one of our sisters) spent the night collecting stones and throwing them at these animals so they would go away.

Ministry | An update from Dominican sisters in Iraq