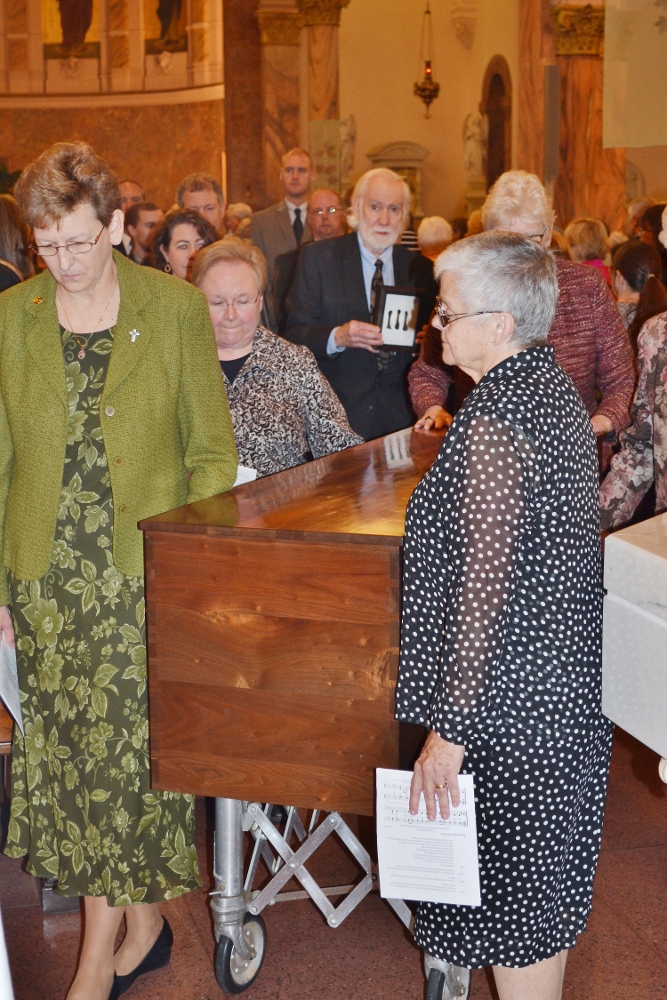 We take the bitter with the sweet this week, a stretch of days punctuated by a tragedy in Chicago that has left one order of women religious in mourning.

But first, of all the news this week, this unique story in western Indiana quickly caught my eye.

Last week, the Sisters of Providence of Saint Mary-of-the-Woods relocated the remains of their founder, St. Mother Theodore Guerin. Not surprisingly, the event was covered by several local media outlets and the Associated Press.

Guerin’s remains have been moved seven times among various locations at the motherhouse since her death in 1856. They were exhumed and examined, for instance, during the sainthood process in 2006 and moved a couple of times during church renovations.

This time, they were transferred from their current location in the Church of the Immaculate Conception to the chapel of a new shrine named for her that will open on Oct. 25.

The move took place after a morning mass at Immaculate Conception, with several members of the order wheeling Guerin’s casket from the church into the new shrine.

The event left the sisters, a congregation of nearly 350 women religious, buzzing with excitement for several days.

“I would describe the event as joyful,” Jason Moon, media relations manager for the order, told me. “There were hymns sung during Mass and the sisters offered song as people walked through the shrine to see where St. Mother Theodore Guerin will be. Other sisters rang bells.”

Guerin, who founded the order in 1840, was the eighth person from the United States to become a saint, the only one from Indiana. On the order’s website, Jan Craven, director of the new shrine, noted that the move coincided with Guerin’s feast day.

“The transfer of her remains is part of the journey of a saint . . . her final journey to her final resting place,” Craven said. “Yes, indeed she sleeps and watches over this house which she has built.”

Sr. Eileen Dede, SP, wrote to NCR earlier in the year from Indianapolis, Ind., to let us know about this, and she mentioned that a new statue of Mother Theodore, sculpted by Theresa Clark, is in the garden at the community’s national shrine in Washington, D.C. The Sisters of Providence celebrate Foundation Day Oct. 22, with Archbishop Joseph Tobin presiding.

If you are nearby, come to the grand celebration of the Shrine of St. Mother Theodore Guerin Oct. 25 at 1 p.m. Persons of all faith traditions are invited to visit the new space and to pray in the quiet chapel. “In addition, guests will have an opportunity to “Journey with a Saint” through new exhibits leading to the chapel. Light refreshments will be served and the day will conclude with a prayer service outdoors.”

The Huffington Post recently ran some of the pictures that Scotland-based photographer Craig Buchan took while documenting everyday life of the women of Poor Clare Monastery in the hamlet of Humbie, Scotland.

“I've always been drawn to individuals who seem to break the mold or challenge our preconceived notions of identity, the sisters of Humbie very much do so,” Buchan told the website in a statement.

“I was welcomed into their private world, and photographing in this environment for me was inspiring, to have the chance to capture the little moments that reveal themselves.

“I hope to give an insight of what life is like as a nun in this day and age and to show a lighter side too.”

An 11-car crash on Sunday afternoon in Oak Lawn, Ill., claimed the lives of Srs. Jean Stickney and Kab Kyoung Kim, members of the Little Company of Mary Sisters. Both died at the scene.

The Southtown Star edition of the Chicago Sun-Times and other media outlets wrote of the tragedy that shocked the community.

The women were “the real deal . . . full of compassion, full of love for people,” a Little Company of Mary Hospital official told the newspaper on Monday.

Stickney, 86, and Kim, 48, both worked at the hospital. News of the accident traveled quickly, but members of the order did not know they had lost two of their colleagues until later Sunday night.

Sr. Sharon Ann Walsh, provincial leader of the American province of the Little Company of Mary Sisters, was driving the car. She was hospitalized with injuries.

As the Hispanic population grows in western North Dakota, thanks to job opportunities in the oil fields there, so does the need for Spanish speakers to minister to these Catholic newcomers.

Coming to the rescue: A group of sisters from Mexico City and the Mexican states of Coahuila and Chiapas, reports the Associated Press.

They’re studying English now at the Mexican American Catholic College in San Antonio, Texas, and in a few weeks will move to Williston, N.D., to help with masses and teach weekly classes.

More news from up north

The Bismarck Tribune wrote a lengthy, interesting story called “The Business of Being a Nun” about Sr. Nancy Miller, prioress of Annunciation Monastery in Bismarck, N.D.

The story basically followed the money, explaining how the women divest themselves of all their personal assets to live in the community.

From computers for the younger sisters to assisted living expenses for the older members, Miller, who refers to herself as the monastery’s de facto CEO, oversees all the spending.

She said that living in a community and sharing resources are gifts unique to religious life. But it can be tricky at times, she admitted.

"It's a challenge as well as a blessing that you have people from their late ‘20s to 100 years living together,” she told the newspaper.

My favorite quote in the story came from Sr. Melissa Cote. Talking about giving up everything she owned, she said: “As long as I have enough for Diet Coke, I’m good.”

In recent weeks the left-leaning Benedictine has caught the attention of both NPR and The Olive Press, a Spanish daily news website. (Global Sisters Report wrote about her in March. Read the story here.)

NPR dubbed the feminist activist Spain’s most famous living nun. A doctor with a master’s degree from Harvard University, Forcades started a new political movement with a rather hefty agenda.

She’s busy campaigning for the Spanish government to leave the Eurozone, nationalize all banks and grant Catalonia, her home region, its independence.

The Vatican certainly knows of Forcades – she’s been reprimanded for her work supporting reproductive rights.

We’ll be watching for more news about her. She is very active on Twitter, if you can read Catalan (Spanish – or use a handy translation program online to get the gist; she posts interesting photos that don’t show up in American media very often, of demonstrations of thousands of people, for example.)