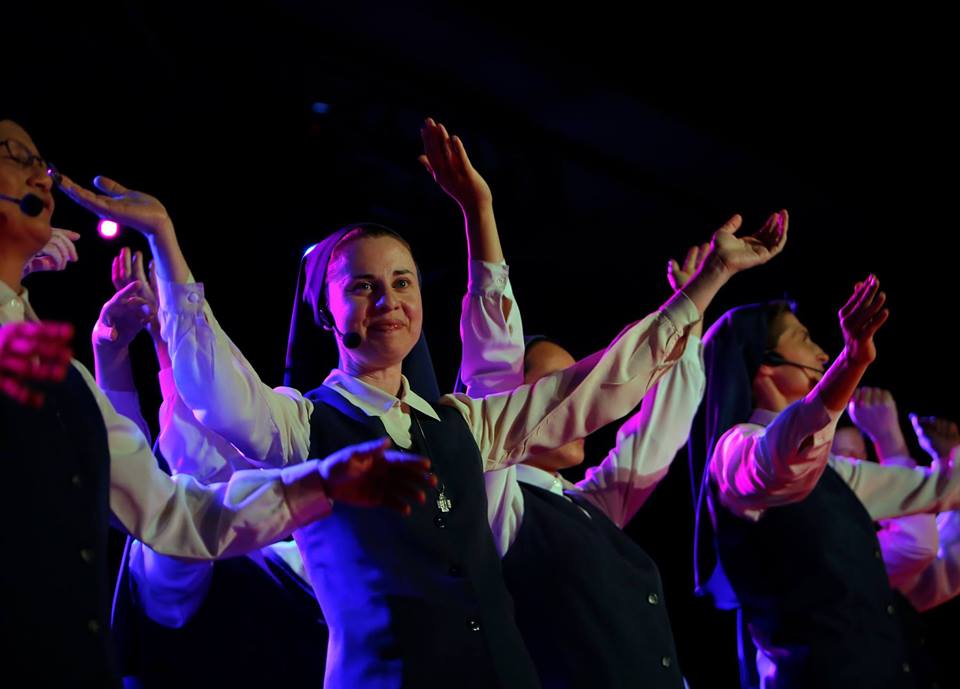 Promotional image for the Daughters of St. Paul of Staten Island's 20th holiday concert, hosted by Chazz Palminteri. (From their Facebook page)

If you haven’t yet placed your holiday order for “Heavenly Trash,” mixed by the skilled hands of a group of women religious in upstate New York, read on.

I never get invited to the good parties. And this report by Staten Island Live tells me that I missed a good one last week.

The Daughters of St. Paul reportedly “brought down the house” and drew their largest audience ever – more than 900 people – at their 20th anniversary concert, which ushers in the holiday season on Staten Island.

In the crowd that night: Oscar-nominated actor Chazz Palminteri, the event’s honorary chairman, and guest of honor Cardinal Timothy Dolan, the Archbishop of New York.

“Rockefeller Center has nothing on you,” Dolan told the sisters, who put on a show of Christmas classics, carols and dance numbers.

Palminteri recalled how he told the event’s organizers that he could chair the concert for just its first year.

“And here I am 20 years later,” the actor said. “I met the lovely sisters and I fell in love with them. You come away with a feeling of grace and I still get that when I am with them.”

Over the past two decades the Christmas concerts have raised more than $1.5 million for the order and its work.

They’re not backing down

The Little Sisters of the Poor had their day in federal court on Monday.

For more than a year now the order has been fighting the requirement in the Affordable Health Care Act that employers provide birth control coverage to its employees.

Lawyers for the order argued this week in a Denver courtroom that the government is trying “to force an order of Catholic nuns to violate their religious conscience or pay massive IRS penalties.”

The sisters can choose to opt out of covering birth control on their employee health plans for religious reasons. But they’re not happy that the opt-out form would allow a third-party administrator to provide that coverage on their health plan.

“What the government has done, and this is a strange thing to do, is said the only way we'll accept you saying, 'I object,' is if, on the same piece of paper, you modify your plan to give someone authority to give out the drugs on your plan,” attorney Mark Rienzi from the Becket Fund For Religious Liberty, told ABC 7 News in Denver.

HHS, which already tweaked the birth control requirement when groups such as the Little Sisters objected, said the rules "balance our commitment to helping ensure women have continued access to coverage for preventative services important to their health, with the administration's goal of respecting religious beliefs."

Rienzi said that he is prepared to take the case to the Supreme Court if the 10th Circuit Court of Appeals does not rule in the order’s favor.

The Wanganui Chronicle in New Zealand reports that drivers will soon see Dominican sisters helping students safely cross the street in front of the Catholic schools in Gonville.

Local residents recently complained to city officials about the busy street and the potential danger for children crossing it on their way to three nearby schools.

But there were not enough adults to work the crossing on school-day mornings. That’s when the Dominican Sisters of Wanganui, who help run the high school, volunteered their services for the younger children.

Mechele R. Dillard with TVRuckus.com has watched the new Lifetime reality TV series, “The Sisterhood: Becoming Nuns,” and has one question: Is anyone really speaking their mind while the cameras roll?

I have yet to see the program so her guess is better than mine.

As the young women settle in and personalities begin to, not surprisingly, clash, Dillard suggests that “it seems unlikely that the sisters would be quite as lenient on the ladies if they were not on camera for Lifetime.

“True, they are just in the ‘discernment’ phase, and are not really nuns-in-training, so a certain amount of leniency would be expected. Still, there is that sense that the nuns are always aware of being on camera and, therefore, always aware of what they are saying, and are holding their tongues as a result.”

Well, not all of them are holding back. Apparently in last week’s episode, Sr. Cyril was brutally honest with her assessment of the young women: “My first reaction, ‘Get a grip! It is not all about you!’”

She talked about how hard it is to relate to younger women entering the sisterhood these days.

“One has to wonder if more of the nuns don’t feel this way – and are just keeping it to themselves for the camera,” wrote Dillard, who called the show “interesting” and “worth watching – especially if you are into 20-something drama queens.”

Sr. Sarah Jordan, a member of the Franciscan Missionaries of the Divine Motherhood, recently became the first member of the order to reach 100 years of age, reports The Independent Irish News in Dublin.

For the auspicious occasion about 50 members of her family flew to Ireland from Australia, the United States and other places around the world to celebrate with her.

Jordan, who was born in Belfast in 1914, spent much of her life living in Africa and working in a leper colony.

“She knows exactly what is going on in the world,” said a colleague, Sr. Maria Kiely. “She’s happy to sit and pray every day for those who need it most.”

Added Kiely: “She’s worked her whole life for the glory of God, not many people can say that.”

Last week I noted that the staff at Christian news website Aleteia.org had assembled a list of their favorite ideas for gifts, available online, made by monks and women religious around the country.

The list was by no means all-inclusive, but I did receive an e-mail from the Cheryl Aughton, director of communications for the Sisters of St. Francis of the Neumann Communities.

She wanted me to know that senior members of the order operate Nun Better Chocolates and Custom Gift Baskets in Syracuse, N.Y. (Visit the website here.)

Aughton wanted me to note one particular offering, the “Heavenly Trash.”

The name is a tongue-in-cheek misnomer for a mixture of Chex cereals, Cheerios, pretzels and mixed nuts smothered in white chocolate. The treat is one of Nun Better’s most popular offerings. They take orders by phone: 315-701-0920.

Call, because nothing says “Merry Christmas” like a bag of “heavenly trash.”