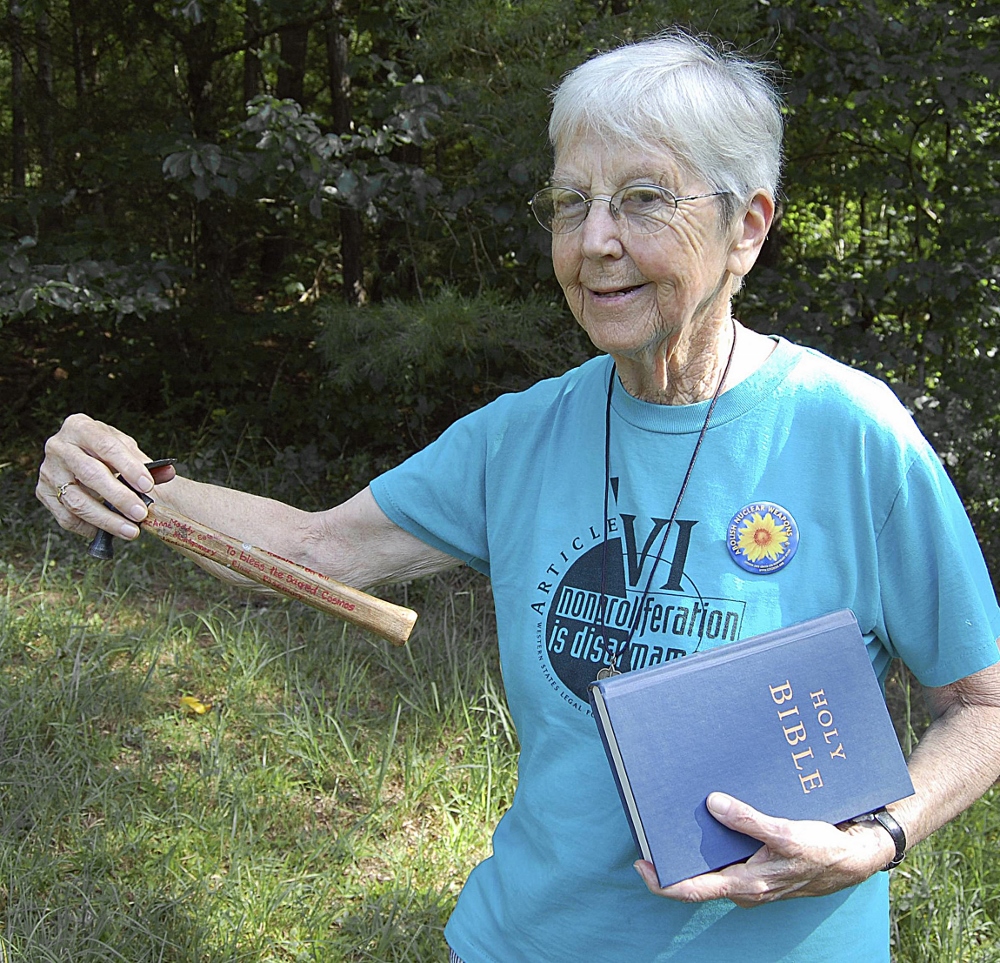 Sr. Megan Rice, a member of the Society of the Holy Child Jesus, is pictured in an undated photo. She was sentenced last February to 35 months in prison on each of two counts, one count of depredation of property and one count of sabotage for her protest at a Tennessee nuclear facility. (CNS photo/Transform Now Plowshares handout via Reuters)

Every now and then the mainstream media gives more than just a passing glance at women religious. This is one of those weeks.

Kudos to The Houston Chronicle this week for getting ahead of the curve on the yearlong “Wake Up the World!” celebration of consecrated life by examining the history, and future, of women religious in Texas.

She was in her mid-20s, in a relationship and studying for a criminal justice degree, with an eye on becoming an FBI agent, when she started feeling that something was missing from her life.

After much prayer she filled that void by joining the Carmelite Missionary Sisters of St. Therese.

In this story she advises others feeling the tug toward religious life to “take some time and be alone and silent. Pray and ask God what he desires.”

“Kids and even we adults are so involved in so many things. We're always busy and have no time for silence. When I visit my family, they've got the radio and TV going, the kids are all playing with their games. There's no God time. Society's so used to go, go, go. It's forgotten there's a God out there. . . . Give yourself some time to be alone in the presence of God.”

Read the rest of Turner’s story about how Houston-based orders are dealing with dwindling membership numbers here.

The New York Daily News – known for its sensational and sometimes-inflammatory headlines – recently used its tabloid power for good by visiting Sr. Megan Rice in jail.

The 84-year-old anti-nuclear activist is incarcerated at Metropolitan Detention Center in Brooklyn for breaking into a nuclear facility in Knoxville, Tennessee, to expose security issues there.

The Daily News reports that Rice now spends her days in a beige uniform living in a gymnasium-sized room with 111 other inmates, conditions the tabloid described as a “hellhole.”

Reporter Linda Stasi, who spent months getting clearance for her prison visit, had sister revisit the night when she and a band of other activists broke into the power plant, splashing a vial of human blood on one wall and spray-painting Bible quotes on others.

“And this is the United States of America, where ‘Real Housewife’ and federal prisoner Teresa Giudice lives in luxury at the federal prison in Danbury, Connecticut, compared to the inhumane conditions Sister Megan and her cellmates are enduring in New York City,” Stasi writes.

Read the rest of her report here.

Rice is scheduled to be released from jail in November.

The Hartford Courant filed a lengthy expose this week on the curious case of Mother Mary Peter, who for decades has run the Our Lady of Mount Caritas Benedictine Monastery in Ashford, Connecticut.

Church officials charge that the monastery is the private home of Dorothy Jordan, who simply calls herself Mother Peter.

The dispute between the 81-year-old Mother Peter and the diocese has brewed for several years but took on a serious note two months ago when the local bishop sent a letter to churches in the diocese warning against “faithful Catholics” being “drawn in and harmed by their experiences.”

Read the rest of the story here.

The drowning death last week of a popular school principal in Cork, Ireland has left the community reeling.

BigNewsNetwork.com reported that 53-year-old Sr. Jean Browne’s body was pulled from the River Lee. She was the principal of the all-girls Ursuline Secondary School and superior of the Ursuline convent in the town.

Her disappearance launched a huge search by local authorities, who deemed her death a “tragic incident.”

“To hear of the death of someone in their 50s is tragic, she was definitely too young to die and it is all the more tragic in these circumstances, and given that she was a member of a religious order,” Cork County Mayor Alan Coleman told the media.

“And she would be one of the younger members of a religious order. It's very difficult for the members of her order, for her family, it's very disconcerting and really a difficult time for everybody and I'm sure there is a certain darkness over Blackrock with this news.”

A headline you don’t see every day

When I ran across this headline – “Former Beauty Queen Trades her Crown for the Life of a Nun” – on SanAngeloLive.com I expected to also see a picture of a nun wearing a sash over her habit.

I was wrong. Whew.

The Texas news site caught up with Sr. Mary Theodore Therese at Our Lady of Grace Carmelite Monastery in Christoval, Texas, who, it turns out, won the title of Miss Black America in 1973.

“I’m looking at myself in those pictures saying, who is she?” she said as she looked at old photos of herself.

I love the story she told of one of the pageant judges asking her: “What is so great about being a black woman?”

She told the judge that she would be just as great if she were any other race.

“I’m just me,” was her winning answer.

Click here to find out what else this sister – who won her pageant title as Arniece Russell – did before she entered the cloistered order. Hint: She’s really good with money.

Quote of the week

In an interview with RadioTimes.com based in London, the British actress said that playing a nun hasn’t been all that easy.

“I do love playing a nun. You’d think it would be easy, but it’s one of my more difficult roles,” she said.

“It’s so far from anything I can imagine – that dedication, tolerance and faith – which is very different to ‘religion.’ I like it when I have a chance early in the day’s filming to be in the chapel. It must be marvelous to have the contemplative psalms and plainsong chanting as part of one’s life. It puts you in such a good mood.”