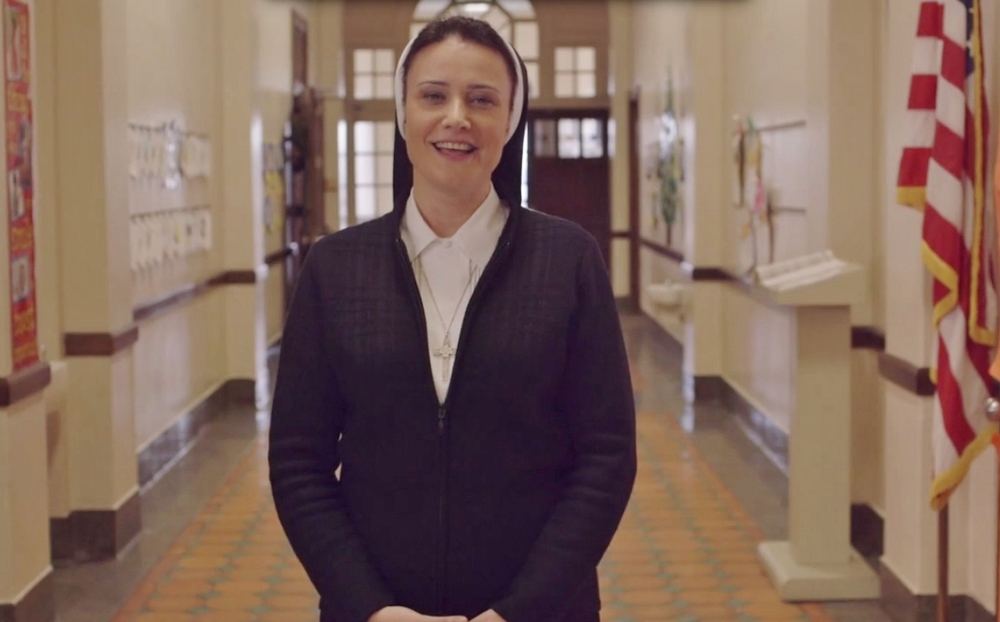 Sr. Daniela Bronka is the new principal of St. Bernard School in Mt. Lebanon, Penn., and surprised some of her students by being young. (Screenshot from welcome video on school's website, stbschool.net)

What does the Super Bowl have to do with women religious? Guaranteed there will be more than a few sisters among fans gathered around TVs on Sunday. But one in particular will be enjoying the game all the way to the bank.

If I were traveling to Phoenix to write about Sunday’s Super Bowl – I wish – I wouldn’t be staying at the Holiday Inn.

I’d be renting a room at the Our Lady of Guadalupe Monastery in West Phoenix, where Sr. Linda Campbell has come up with an ingenious plan to make a little money from this week’s football festivities in town.

It’s the story that American newspapers and TV stations, such as KREM TV in Spokane, Washington, couldn’t resist this week.

When Campbell found out that local home owners were renting rooms to people coming to town for the big game, Campbell, an Arizona Cardinals fan, decided to follow suit.

The game plan: Rent out each of the convent’s eight guest rooms for $300 a night.

The money will go towards the sisters’ work, including a community garden and running a thrift shop.

Campbell says she’s rooting for the Seattle Seahawks to beat the New England Patriots, but “at this point I'm just praying for a really good game."

A call for equality

NPR’s Here and Now midday news show recently interviewed Sr. Joan Chittister, a member of the Benedictine Sisters in Erie, Pennsylvania, and author of the upcoming book, Between the Dark and the Daylight: Embracing the Contradictions of Life.

Chittister, a well-known lecturer on human rights, women’s and peace and justice issues, has also written about those topics for the National Catholic Reporter.

In the NPR interview she argued for the need of more general equality in the Catholic church. A couple of her thoughts:

“I would not deny that in every dimension of the church there is great respect for the sisters, but, since Vatican II sisters have grown up too, just like women everywhere and they’re basically highly educated and very committed people. So, when they began to function with confidence as full adults, that threatened an old church. The image of women religious by churchmen themselves was the eternal silent servant. So, now you have a body of intelligent, educated, adult women and you’re facing a new climate in the church with a pope who is apparently not afraid of difficult topics.”

“This anti-female attitude – they don’t want to call it that, they’ll never call it that. ‘We respect you, we love you. Look at how we put you on a pedestal,’ meaning as long as you’re on a pedestal, you yourself can’t move any place. This is very, very ingrained in churches in general and in the Catholic church certainly. Now this pope has said ‘feminism is about allowing every member of the human race to become a fully functioning human adult.’ He has made those statements and he has talked about the fact that until we really look at the feminist issue, he says we have to work harder to develop a profound theology of the woman. Only by making this step will it be possible to better reflect on their function within the church.”

Read or listen to her interview here.

Fourth-grader Damien Szuch was expecting an elderly woman as his new principal when students  learned that a women religious would lead St. Bernard School in Mt. Lebanon, Pennsylvania, for the first time in years.

Then he met Polish-born Sr. Daniela Bronka, who “turned out to be really young. Like 20,” Damien told the Pittsburgh Post-Gazette.

And to celebrate National Catholic Schools Week this week she included a lip-synching concert for the students among the activities.

“I’m trying to build a positive relationship with the students and show them that a nun in the office doesn’t have to be scary or dramatic,” she told the newspaper.

“They think you have to be gloomy-faced and so serious. If you touch the lives of these children, maybe one of them will join the priest or sisterhood.”

With the number of women religious serving as principals or teachers decreasing in the Catholic Diocese of Pittsburgh, Bronka was a sought-after educator.

“We were on the edge of our seats during her interview because we were so excited about the prospect of her coming here,” said the Rev. David Bonnar, pastor of St. Bernard Parish.

Read the rest of the newspaper’s glowing profile of Bronka here.

Media outlets around the world carried the news this week of the historic find inside the crypt of the Trinitarian convent in Madrid, Spain, where archeologists and anthropologists have been searching for the remains of the country’s greatest writer, Miguel de Cervantes.

Malay Mail Online, an independent online newspaper in Malaysi, and others enthusiastically reported that experts found the remains of a coffin with Cervantes’ initials on it.

That brings them one step closer to setting up an official burial site at the cloistered convent that Spanish officials hope would attract tourists and literary fans.

The Franciscan Sisters of Mary in Bridgeton, Missouri, lost one of their own on Jan. 21 – Sr. Mary Celine Gress.

In a statement reported by the St. Louis Post-Dispatch, the order referred to Sr. Gress as “the angel of a peaceful death.”

At the order’s retirement home she would sit for hours with her dying sisters, “holding their hands and stroking their heads, offering comfort and encouragement,” the order said.

Sr. Gress, a registered nurse, was a nun for more than 80 years. She died of heart disease four days after her 102nd birthday.

One more for the foodies

Don’t hate me, but I can’t pass up sweet news like this item from Delawareonline.com.

The Oblate Sisters of St. Francis de Sales in Childs, Maryland, are having their annual cream puff fundraiser on Feb. 6.

The sisters and volunteers make the cream puffs every year around Valentine’s Day. Last year they made a record-setting 5,200 pastries in a 12-hour period.

I’m not even going to try to figure out the calorie count on that.

Alas, the sisters don’t ship the creamy goodies. But for anyone who lives in the area, go to mountaviat.org for more information.