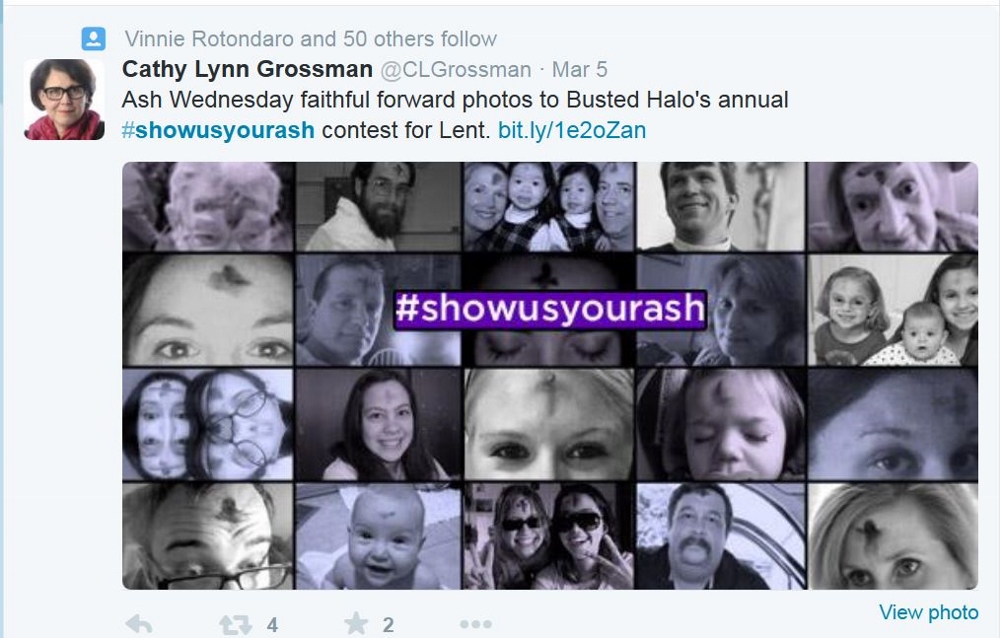 A retweet of Busted Halo's "show us your ash" social media campaign.

Here’s a heads-up for next year: Apparently posting a selfie photo with ashes on your forehead is a “thing” now among Catholics, including some women religious and priests. I’ll have to remember to mark that on my calendar. (People who follow @NCRonline on Twitter already know that; National Catholic Reporter started #MyAshes last Lent.)

This nonsense has to stop

I enjoy a good laugh as much as the next person. But I don’t see the funny in stunts like this.

A group of women dressed up as nuns and stood outside a theater in County Cork, Ireland last week to protest the new movie, “Fifty Shades of Grey,” reports The Daily Edge in Dublin.

One of them was a pregnant woman.

So many things wrong with that, but here are the two that set me off: Not only is this disrespectful of women religious, but it demeans genuine concerns some people have that the movie about a sado-masochistic relationship promotes violence against women.

(Not only that, but did the folks at ChristianToday.com think those were real nuns? Their report sort of reads like it.)

The fake nuns stood outside a theater in Drinagh holding cardboard signs that read “Careful Now” and “Down with this sort of thing.”

Their “spokeswoman” told The Daily Edge that the protest had “stopped a few lads and mortified them about going in.”

This news story, on the other hand, makes me laugh, though apparently not everyone thinks it’s funny.

Mashable reports this week on the trend of Catholics – mostly priests but reportedly some women religious, too – marking Ash Wednesday by posting photos of themselves with ashes on their foreheads to Twitter and Instagram.

I say that whenever social media can be used to spread a positive message, go for it.

“If people find it meaningful to trumpet their inevitable death on social media, I'm not opposed. Just strikes me as odd.”

There are a lot of links to other commentary on the Twitter feeds linked above. What do you think?

New look for a new age

Since Global Sisters Report is about facilitating connections among women religious around the world – and to the wider world – we’re happy to share the efforts of a community looking toward the future. The Journal News in White Plains, N.Y. reported on how the Dominican Sisters of Hope have revamped, retooled and relaunched their website.

“There’s a new generation out there that lives in the social media world: They want Twitter and Facebook and exciting websites that they can connect to,” Sr. Lorelle Elcock, prioress of the order based in Ossining, N.Y., told the newspaper.

“We want to reach the next generation in the way they’re used to communicating.”

The new ophope.org is loaded with colorful photos and graphics and stories about the sisters’ activities around the world.

The order’s old website “was quite boring,” said Sr. Catherine Walsh. “This one is very interactive. Our goal is to get the word out about the work we do, especially to a younger audience so they can join us perhaps by volunteering or at least by knowing what we do.”

The Japan Times and other mainstream media outlets covered this news out of Vatican City.

Pope Francis announced last weekend that he will elevate four women religious to saints on May 17. They all lived in the 19th century and all founded Catholic orders. They are:

The Atlanta Black Star filed a report on Sr. Helen Prejean’s current efforts to stop the execution of a man on death row in Texas.

Rodney Reed is scheduled to be put to death in two weeks for the 1996 rape and murder of 19-year-old Stacey Stites.

His lawyers have not been able to convince the courts to retest DNA found at the scene with modern technology. A first cousin of the victim has come forward to say that she believes Reed is innocent of killing her relative. She has written to authorities requesting a retrial.

Prejean says she’s not surprised that officials have refused to further investigate the case in light of the new evidence.

“If you don’t equally value your citizens in life, you won’t value them in death,” she said, referencing the deaths last year of Michael Brown and Eric Garner, who were killed by police.

Food for the soul

This story defines brotherly love in more ways than one.

KZTV in Corpus Christi, Texas, filed a heartwarming story about Sr. Elizabeth Smith, a Sister of Charity of The Incarnate Word who has opened an organic soup kitchen in Kingsville.

Smith was motivated by the memory of her brother, who died of cancer. He benefited during his treatments from the organic, healthy diet he ate, Smith told the TV station.

She wants the same “nourishing food” for Kingsville’s needy.