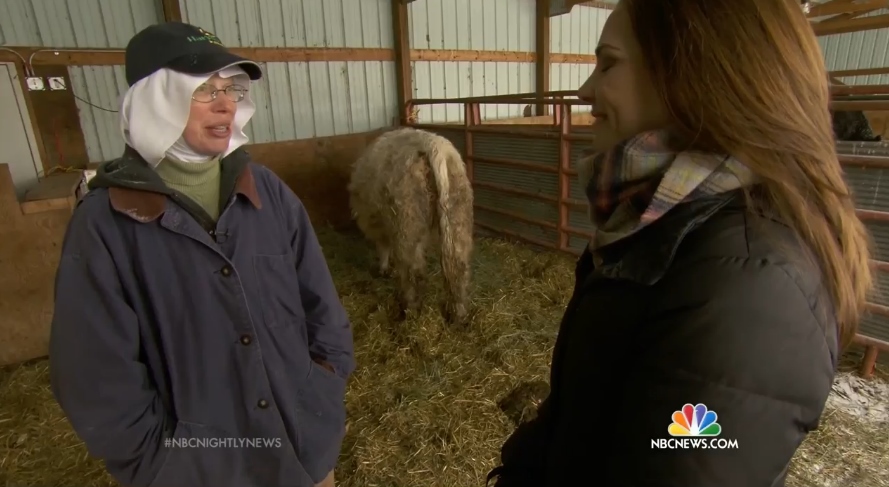 Women religious never cease to amaze me with the breadth of what they bring to this world. Just consider this group of sisters in Colorado.

Down on the farm

The Benedictine women religious of the Abbey of St. Walburga in Virginia Dale, Colorado, got a bit of national exposure this week when NBC Nightly News came calling.

The network ran a piece about how the women raise cattle on their 250-acre ranch.

NBC correspondent Erica Hill visited the self-sustaining farm, which last year produced more than 130,000 pounds of beef for dozens of local families. And even that wasn’t enough to meet the growing demand for the naturally produced meat.

Sr. Maria-Walburga Schortemeyer told Hill that “having an agrarian part of our life keeps us rooted to the earth.”

And, laughed Sr. Sister Maria-Michael Newe, “This farm teaches you [that] you have to pray because you are not in control of any of it.”

And in The New Yorker

Much has been written about anti-nuclear activist Sr. Megan Rice since she was incarcerated last year. I have mentioned a few of those recent articles in this column.

But none of those stories is as lengthy and in-depth as an article this week in The New Yorker that explores why Rice and two other people – Christian pacifist Gregory Boertje-Obed and Catholic layman Michael Walli – broke into the Y-12 National Security Complex in Oak Ridge, Tennessee, in July 2012.

The story puts their actions in the context of the Plowshares movement inspired by peace activist Dorothy Day and asks tough questions of protesters involved in anti-nuclear campaigns, including this: Is it moral to break into high-security nuclear sites? What if someone gets hurt?

The article by Eric Schlosser describes the actions of Rice and her colleagues that day as something out of an espionage novel.

They walked through the church parking lot to a nearby dirt path, followed the path through a stand of trees, reached a meadow, and turned left. Up ahead, in the darkness, they could see the silhouette of a steep hill called Pine Ridge. On the other side of the hill was Y-12. . . .

The three hoped to reach the uranium-storage facility before sunrise, having carefully planned the intrusion for more than a year. But they had no desire to steal anything or to make a bomb. They wanted to ‘heal’ and ‘transform’ the building with their own blood; to mark it as a symbol of evil, empire, and war; to protest against its role in maintaining America’s nuclear arsenal. . . . Carrying flashlights and backpacks, they headed toward the hill.”

This clearly isn’t why they do what they do. But a surprise honor for three members of the Immaculate Heart of Mary in Harlingen, Texas, is welcome nonetheless.

Action 4 News in Harlingen reports that Srs. Carolyn Kosub, Emily Jocson and Fatima Santiago were stunned to learn that they had won a 2014 Lumen Christi Award from Catholic Extension, a national fundraising group that supports mission dioceses across the United States.

The Catholic Extension website describes how the three nuns moved to Penitas, Texas, a poor area populated by Mexican immigrants, after it was hit by a tornado in 2003.

They set up the Proyecto Desarrollo Humano outreach center, then built a new parish, St. Anne, dedicated in 2013. The women donated all of their grant winnings to the church.

“I've learned a lot from our people,” said Kosub. “They are materially poor but rich in family values and faith and welcoming people. I feel much richer being a part of their community here.”

A story out of Chicago

Sr. Michelle Germanson’s nightmare lasted 18 months. That’s about how long it took the Chicago nun to prove that she didn’t owe hundreds of dollars in parking fines.

A story this week by NBC 5 in Chicago recounts how the president of Trinity High School in River Forest, Illinois, has driven a Toyota with the vanity plate “TRINITY” for going on 20 years.

In 2013 officials notified the Dominican Motherhouse in Sinsinawa, Wisconsin, that the car had hundreds of dollars in outstanding parking tickets from New York City.

Just one slight problem with that. “I haven’t been to New York, and certainly my car hasn’t been because I haven’t been,” Germanson told the TV station.

So she and her assistant – with help from a lawyer and other concerned friends – spent months trying to prove that the car in question wasn’t hers. It was actually a different color than hers, and its Wisconsin vanity plate was “TR1NITY” – which used a number instead of the first “i.”

Then Germanson saw a report in December by NBC 5’s investigative team about a man with a similar parking-ticket problem. The TV station helped her prove the snafu to the state of New York.

I’m a firm believer that we cannot be reminded enough about the importance of being kind to each other. And I’m very certain that Sr. Sandra Makowski would agree on that point.

Makowski recently published a book promoting random acts of kindness, according to a story last week in The Post and Courier in Charleston, South Carolina.

The Side of Kindness: Recovering the Lost Art of Being Kind offers 35 chapters of stories of kindness, but also advice on how we can exercise, so to speak, that charitable muscle.

“Why does it [kindness] seem to be on the endangered species list instead of what it means to be human?” Makowski said to the newspaper. “I don’t see it that much anymore.”

Makowski was influenced early in her life by the women religious who taught her in grade school in Binghamton, N.Y.

“I wanted to be happy like they were and I wanted to live with a group of people who seemed so happy together and were so kind,” she said. “Kindness and happiness, that’s what I wanted for myself.”

She and her twin sister, Carole Jean, joined the Sisters of St. Mary in Buffalo in 1965. In 1981 her sister was killed in a car accident. The loss was devastating and one that she still speaks of today.

In 2009 Bishop Robert Guglielmone appointed Makowski to the position of chancellor for the Diocese of Charleston in South Carolina, one of only a handful of women to hold that job in the country.

During her tenure she began to write columns for a weekly email she sent to employees. She always included kindness “advice,” such as being aware of tone of voice when speaking to someone and how important it is to say “good morning” to people.

The columns, all tied somehow to kindness, became the genesis of her book.

Read more about her life here.

The Associated Press reports that Sr. Ann Kessler’s book detailing 1,500 years of history of Benedictine women has been reissued.

Kessler, a member of the Sacred Heart Monastery in Yankton, South Dakota, first wrote Benedictine Men And Women Of Courage: Roots And History in 1996.

She told the AP that demand is still so high for the book that she has seen some copies selling for as much as $500 online. The original book sold for $30.

[Lisa Gutierrez is a reporter in the Kansas City area who scans the non-NCR news every week for interesting pieces about sisters. She can be reached at lisa11gutierrez@gmail.com.]