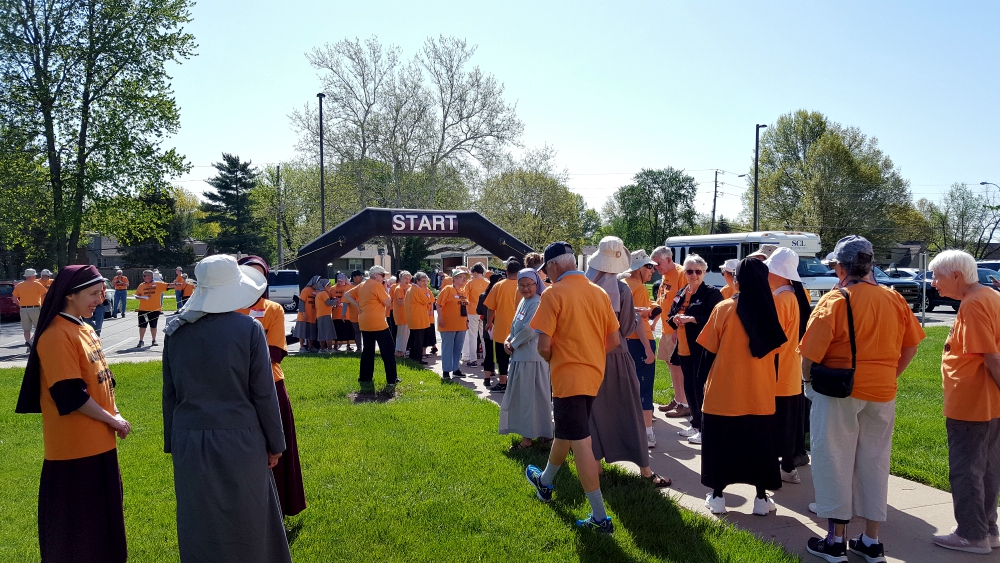 Most of us started at 10 a.m. sharp! These people meant business. Some strolled out to start a little later. (GSR photo / Michele Morek)

Kansas City, Missouri — Most people in the United States and the rest of the world would not think of Kansas City when listing the top 10 melting-pot cities where international sisters might be concentrated.

Kansas City has more than 2 million people in a metropolitan area that straddles two states: Missouri and Kansas, right in the middle of the country. It's in the part of the United States affectionately referred to as "the heartland" or dismissively called "flyover country" — the part you have to fly over to get from New York to California.

So it might be a little surprising for a visitor to attend the annual Kansas City Blisters for Sisters, a day to celebrate sisters and maybe raise a little money for the Serra Club, an organization of Catholic laypeople dedicated to promoting vocations to the priesthood and religious life.

This event — held May 5 and co-sponsored by the Serra Clubs of Kansas City, Missouri; Kansas City, Kansas; and Johnson County, Kansas — has been celebrated for more than 10 years. There is a walk/run of 1 or 2 miles (depending on one's age and energy level), a Mass, and a celebratory meal with lots of prizes. Besides the sisters, the Serra Club members and their families participate: This year, there were 174 sisters and probably more than 100 Serra Club members and their families or supporters.

Registration gave us time to mingle, greet old friends or make new ones, and be fitted for the required orange Blisters for Sisters T-shirts. Of course, since I work for Global Sisters Report, I was running around asking all the sisters where they were from! 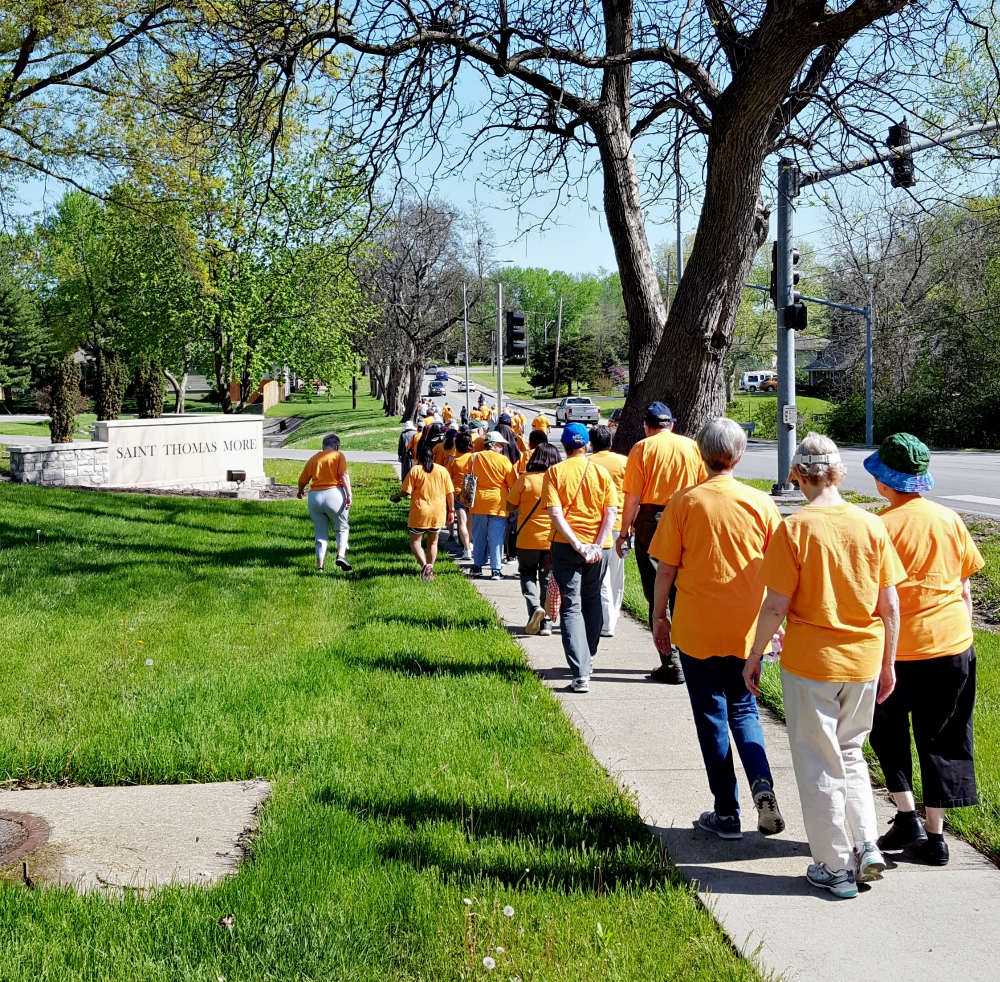 The group soon straggled into smaller units, depending on walking speed. Then the real athletes split off onto the 2-mile trail. Serra Club members provided water along the way. (GSR photo / Michele Morek) 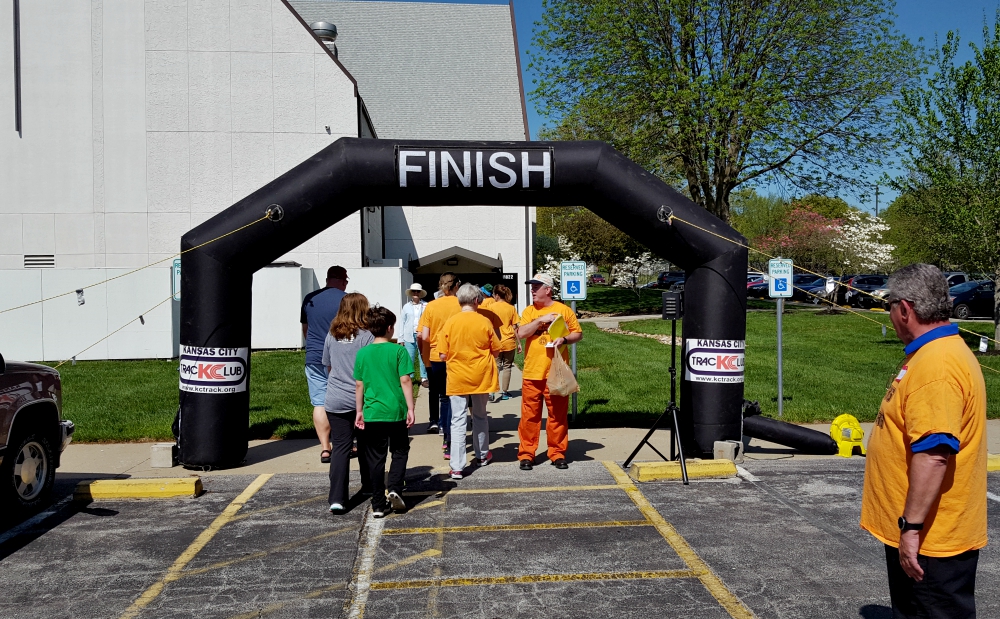 The "Speedy Sister" finished in minutes; the "strollers" took almost an hour. But the alert Serra Club organizers watched for the last arrivals to cross the finish line. (GSR photo / Michele Morek)

I was surprised at the global nature of our group. From the 174 sisters in attendance, I encountered sisters from Argentina, Canada, Brazil, France, India, Italy, Kenya, Mexico, Nigeria, the Philippines, South Korea, Tanzania and Vietnam.

The group was a microcosm of religious life today. There were the orders I was familiar with — the Benedictines (of Atchison, Kansas, and Clyde, Missouri); the Sisters of Charity of Leavenworth, Kansas; and the Ursulines, originally of Paola, Kansas.

And there were many others — Daughters of Charity; Dominicans; Franciscans of Independence and Savannah, Missouri; Little Sisters of the Poor; Little Sisters of the Lamb of God; Society of Our Lady of the Most Holy Trinity; and several new orders that seem to be springing up like mushrooms after a spring rain, with lots of fresh-faced, energetic young sisters.

I'm sure there were more. Confession: There I was, working for a news organization, and me without a pen or notebook. So I apologize if I missed any.

It was a perfect day for a walk after our long, cold winter, and we rejoiced in the chance to stretch our legs and visit along the way. I didn't know it was a race, but apparently it is a matter of tradition and pride for a wiry Sister of Charity to be first across the finish line! She said she had already run 6 miles that morning, so she was warmed up and ready to go.

As the stragglers crossed the finish line, we assembled for Mass, then a picnic lunch. The final event was a drawing for prizes. Besides the $50 bill each sister got when she registered, there were cash prizes, certificates for meals at local restaurants, and other Kansas City goodies.

Two sisters in my local Ursuline community won a bunch of free car washes, and they shared the spoils with me.

The Serra Club made us feel honored and appreciated, and we all got a renewed sense of the global nature of what it means to be a sister.

And I look forward to five free car washes.

Do you have a great story about the global sisterhood? We are always glad to have new sister writers for the columns of Global Sisters Report. Contact me to talk about writing something for us: mmorek@ncronline.org or 816-968-2232. 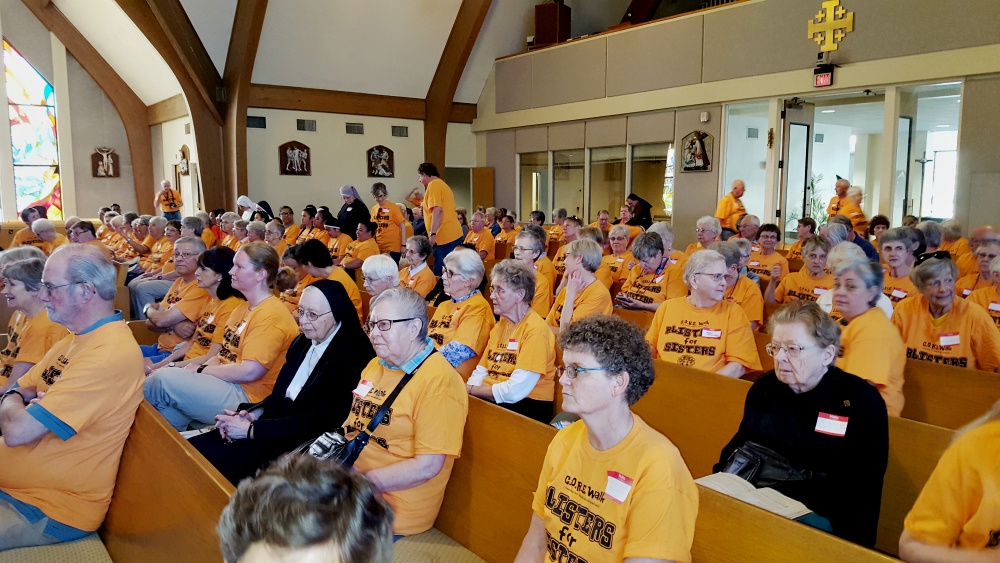 We were glad to get inside — it was getting hot! We were a sea of official orange "Blisters for Sisters" T-shirts. (GSR photo / Michele Morek) 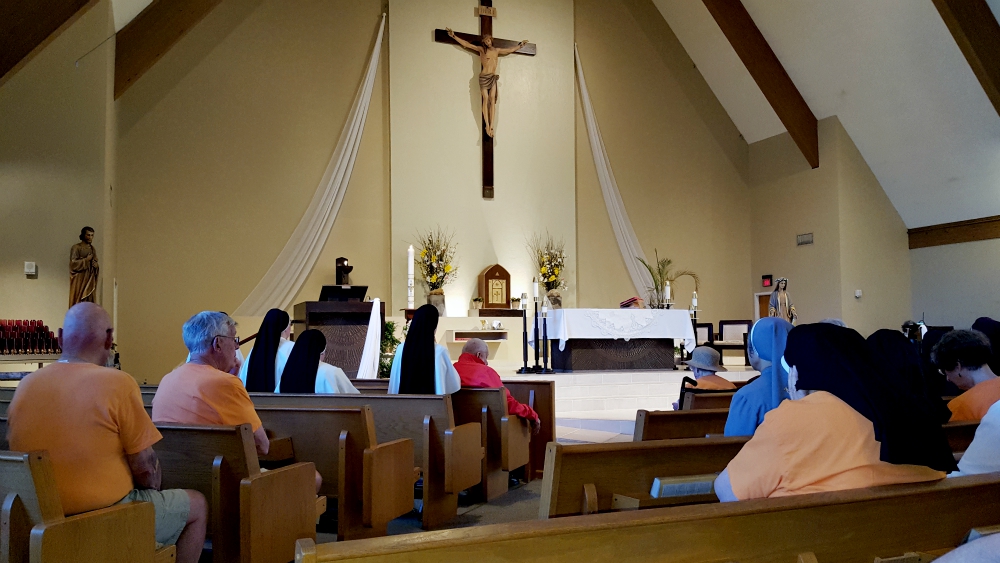 'Listen to the heart of our people,' Sr. Teresa Maya tells US bishops

A call within a call: reflecting and responding

Darkness may endure but grace gets us through