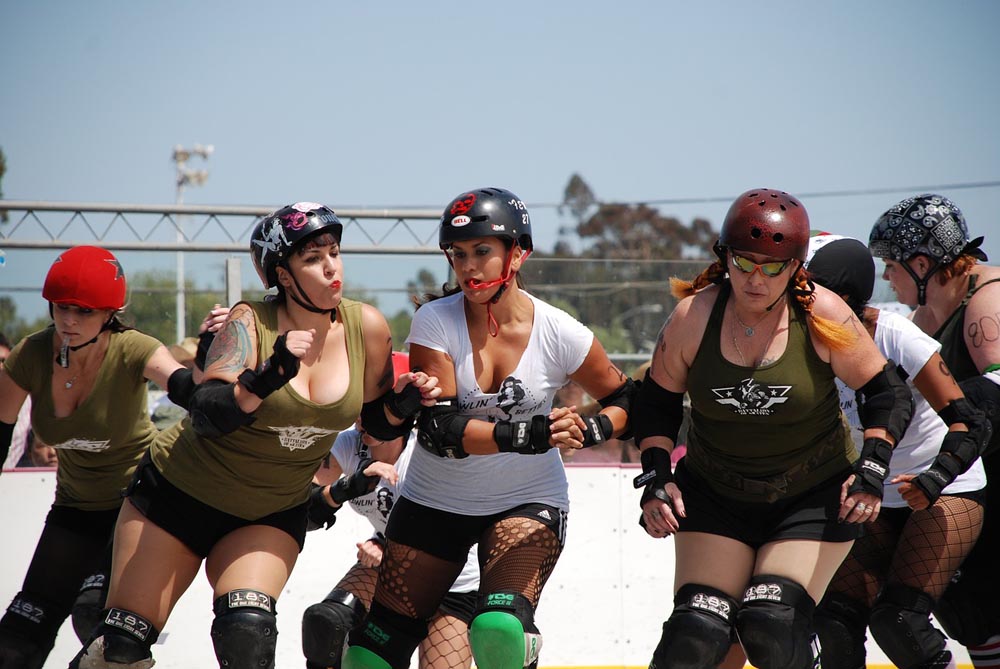 "Tell me you really didn't go to watch that. Tell me you didn't," implored a nun-friend. "It's just not right that you should set foot in such a place."

So started the conversation about attending a local Cincinnati Roller Girls match. They play at the old fieldhouse at the Catholic university where I work, so it was easy enough to get to the games. Besides, a faculty member I know skates for them, loves it, and I had promised her that I'd come since she personally invited me. "Roller Derby is very different these days from what you might remember," she offered expectantly.

What do I remember? Let's see … I remember the time being the early 1960s when the weekly Saturday afternoon show "Roller Games" aired on local TV. The main skating team always featured was the San Francisco Bay Bombers. At that point I had never been to San Francisco but I felt a familiarity with the city just because of this team. As a kid growing up in Toledo, Ohio, I loved roller skating. Those were the days of the clamp-on skates and we all sported the can't-live-without-skate key on a string around our necks. Our home featured a long, sloping concrete driveway that was a thrill to sail down with only one catch: there was a curb lip that you had to get over at the bottom, and jumping at the exact right time usually worked in order to land upright in the street below. It worked, that is, when one skate didn't choose that moment to fall off. We had interesting landings and perpetual scraped knees to show for our prowess.

I don't know much about the roller derby rules, but I recall that the sport was all about scoring points when certain skaters got ahead of persons on the other team and used a variety of techniques to accomplish that, with elbowing someone out of the way being very prevalent back then. Those players must have been made of synthetic to take all that abuse.

Before the game I happened to see one of our graduate students on campus and in our casual conversation I asked, "Do you know anything about roller derby?" He thought for a moment and said, "I think the Girl Scouts and Boy Scouts do that with little cars they race." Very helpful.

My nun-friend need not have been concerned. The skaters are impressive with their athleticism and level of fitness. They zoom around the track — the size of a basketball court — as fast as possible given the turns at each end. They're quick on their feet to leap out of the way of blockers and oftentimes go around on one leg in order to stay in-bounds. The purpose of roller derby is still the same as it always was: help your team's jammer break through the pack so that she can get around the track once and then scores points for passing skaters from the other team.

In my naivety and based on past knowledge, I was expecting a brawl-type atmosphere. That was so erroneous. Today's roller derby skaters do block and push and pull to accomplish each "jam," but it's done with integrity, good sportsmanship, and skill. Whoever lands out of bounds simply goes back to that point and re-enters the track. And when the jammer breaks through the pack and flies around the track by herself, well, that's just exciting, as is how fast the score adds up. After 60 minutes of playing time, the final score for this game was 287-70 (in favor of the faculty colleague's team).

The players' names are meant to be intimidating, as many use what they call their "derby name", like Bonnie Collide, Mama Crass, Nuk'em, and Cosmo Pain. Before the game I got to chat with a few players since the faculty member told them I was coming. They had a derby name all ready for me: "Bad Habit." We all had a good laugh with that one. Now if only I were a bit younger and could maneuver on shoe skates. …

Spirituality | On a roll

What would it mean to be seen, and see the world, with Easter eyes?

Wicked questions lead to reflection on mental health in service