A gathering of the leadership of the world’s international women religious orders began to wind down Tuesday at a conference center in Nemi, Italy, as some 70 sisters hashed out what they had heard, learned and discerned in the course of a week together.

They met under the auspices of the International Union of Superiors General (UISG), which dates back to Vatican II, and today claims some 1,980 congregation heads and leaders.

For these women, who came from the around the world, it was an opportunity to listen to each other’s stories, to share experiences, aspirations and common challenges. It was also an effort to give their organization renewed energy and direction.

Some of the most riveting stories came from sisters in the Middle East and Central Africa, where social and political unrest is a feature of daily life, where extremists, in the name of religious, are triggering violence, and where Western corporations, seeking minerals for consumer goods, undermine governments and incite violence by working with illegal smugglers.

During the week many women expressed feelings their voices have no place to be heard in the church and they decried a gender-based two-tier church structure. Some said that bishop after bishop speaks appreciatively of the women’s work, sometimes in the loftiest of languages, but then treats them condescendingly and as distinct unequals. Some women, for example, said bishops of indigenous congregations do not allow the sisters to participate in national or international meetings of sisters.

How to develop inclusiveness within the UISG and wider church was yet another theme that women agreed needs attention as they look to the future. They pondered how to get more countries involved in UISG work. For example, because of political conditions, China and Vietnam were not represented. Other Asian countries, including Indonesia, Burma, Laos, Cambodia and Thailand, were not represented.

Financing the future work of the UISG surfaced as another major concern. As shifts in numbers of women religious continue, with diminishment in the wealthier global north, and increases in the poorer global south, questions of how to fund the UISG are growing. (This meeting of the Council of Delegates, the heads of 39 constellations of international sisters congregations, which meets every 18 months, was financed by a grant from the Conrad N. Hilton Foundation.)

Religious and spiritual formation in growing congregations is another trigger issue for global south women religious communities, and for the UISG itself. If women are to have significant places on the councils of the church, they will also need to be well educated in Scripture and theology. Programs exist to help in this formation, but they are relatively few compared with the need at hand.

Weaved into these challenges is one that permeates all the others: better communication. The women have grown in awareness that modern digital communication opportunities afford them new chances to bind together as never before. But getting these technologies into the hands of poorer communities while keeping them abreast with the speed of change in communication techniques is a major concern.

The UISG lists its aims as follows:

The UISG meets in general assembly every three years in Rome.

[Tom Fox is National Catholic Reporter publisher and director of Global Sisters Report. He can be reached at tfox@ncronline.org and can be found on Twitter @NCRTomFox. Joyce Meyer contributed to this report.] 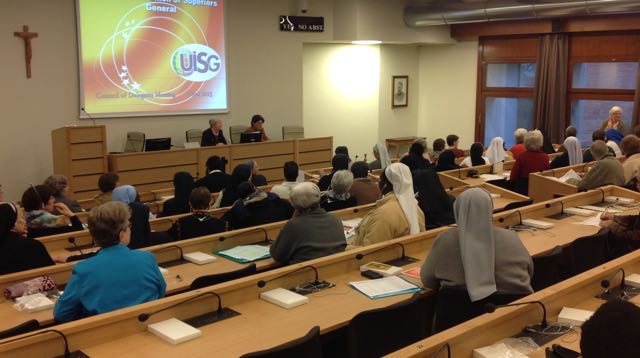