During a recent Global Sisters Report planning forum in Kansas City, Missouri, we stood in circle and tossed around a GSR stress ball while sharing a word or a phrase about what being part of this unique publication means to us. Words like "rewarding," "grateful" and "inspiring" came up.

I'd like to offer two more: "proud" and "humbled."

Those two words are particularly appropriate as GSR turns 5 years old on April 23. We want to thank our readers, writers and contributors, but we especially want to thank the Catholic sisters whose lives and dedication provide the inspiration for our mission: to be a "dynamic online community that reports on and gives voice to women religious around the world." We also are grateful for Conrad N. Hilton's appreciation of Catholic sisters and to the foundation that carries out his legacy for its financial backing of GSR.

What began as an effort by National Catholic Reporter to write more stories about Catholic women religious is now an award-winning publication that has had more than 1.8 million visitors since its launch and an average of 60,000 monthly readers. GSR articles are regularly picked up by Catholic News Service, Religion News Service and other media outlets and congregational websites.

Our five-year mark is a good place to explain how GSR got started, where we are and where we're going.

Since its start in 1964, National Catholic Reporter often wrote about Catholic sisters, particularly their efforts to live out the Second Vatican Council's call for renewal of religious life and their ministries to those on the margins.

The sisters "were doing some of the best work in the church," NCR Publisher Tom Fox said in a recent joint interview with Sr. Joyce Meyer, a Sister of the Presentation of the Blessed Virgin Mary of Aberdeen, South Dakota, and GSR's international liaison to sisters.

In 2008, NCR approached the Conrad N. Hilton Fund for Sisters, which provides small grants for sister-led projects around the world, for funding to increase its coverage of women religious. Meyer, then executive director of the fund, had traveled to dozens of countries to visit sisters' projects and oversaw compilation of a book, Seeds of Hope: Catholic Sisters in Action Around the World, about 28 of the most interesting ones. In 2009, the fund, along with the Conrad N. Hilton Foundation, which awards grants to larger projects, provided $75,000 to NCR to write more articles about women religious and publish some stories from the book.

Two years later, NCR received a $150,000 planning grant to explore creating a website to report on sisters and provide connections for sisters across congregations and continents. After a lot of research and some bumps, including rejection by the foundation of its initial proposal, NCR received a $2.3 million three-year grant in 2013 for the project. (The grant was renewed for three years in 2016.)

One early step was to meet with sisters in African countries.

"We wanted to have the sisters give us input," Meyer said. "We had our ideas, but what would they want on a website?"

Other meetings were held with sisters in the United States.

Choosing a name elicited a lot of discussion. Finally, "we came on to Global Sisters Report because it did two things: It was reporting about sisters and sisters reporting about themselves," Meyer said. "That was the dynamic that we wanted."

GSR's framework took shape around Catholic social teaching, spirituality and religious life. Sr. Jan Cebula, a Sister of St. Francis of Clinton, Iowa, joined in November 2013 to recruit sisters as columnists and sources for stories by journalists in the United States while Meyer drew on her international contacts.

"There was a desire to report not only about sisters, but to have their voice, and that's where the columns fit in," Cebula said.

It was heartening how many sisters returned calls to help shape the project, said Mary Lou Nolan, a former assistant managing editor for features of the Kansas City Star who became GSR's first editor in January 2014.

"The sisters didn't know what we were going to be, but they trusted the NCR backing," she said. "They were very helpful in trying to determine not just what they wanted, but really what the global sisterhood wanted and needed and what they wanted the rest of the world to know about."

Reporting on sisters posed some challenges. Sisters didn't like talking about themselves, GSR reporters recall, but loved discussing their ministries.

To school the secular journalists about the complexities about religious life, Cebula created a tutorial.

"Religious life is a culture," she said. "I tried to convey what that culture is and like and get across that it is not a club. It's not an organization that people might belong to. It's a life form."

On the afternoon of the launch day, Nolan remembers learning that readers from dozens of countries had visited the website.

"It was impressive to me that there were people across the world who were looking at our homepage," she said. "That cemented the global nature of what we were doing."

Migration, advocacy against human trafficking, and environmental issues were key topics, reflecting the ministries of sisters. It turned out that sisters loved reading about sisters — as did associates, oblates, lay volunteers and others.

"That was the big surprise, how much the women religious themselves appreciated it," said Cebula, who left GSR in September 2016 after she was elected to her congregation's leadership team.

GSR debuted as U.S. congregations were under scrutiny by the Vatican, which also subjected the Leadership Conference of Women Religious (LCWR) to a doctrinal assessment, sparking a backlash among Catholic laity. Both inquiries ended in agreeable solutions. GSR broke news, provided a forum for sisters and became a go-to source of information.

When I joined as editor in January 2016, the goal was to continue to raise our profile globally, garner more attention outside sisters' circles and tackle even more challenging reporting projects. To that aim, we've done series about sisters involved in mining issues, race reconciliation in the United States, and the global migration crisis in our Seeking Refuge series last year.

To add more voices of international sisters, we introduced a monthly feature called The Life in June 2017 in which sister panelists offer short reflections on questions about ministry and religious life. That feature is overseen by Ursuline Sr. Michele Morek, who joined in January 2017 as GSR's liaison to sisters in North America. The third panel will debut in June.

We've not shied away from controversy. We've covered issues of women religious being abused by clergy, calls for the church to provide places of authority for women and women religious, and abuse by sisters.

While proud of GSR's reporting and the forum it offers sisters, I'm also humbled. Though I am a cradle Catholic and have 10 years of experience teaching catechism to eighth-graders and confirmation students, I had a lot to learn about sisters — and still do.

I've met hundreds of sisters in the United States as well as in Thailand, Myanmar, Japan, Kenya, the Philippines and Hong Kong. I've witnessed the sacrifices many sisters make to serve others. It's just the life they've chosen, a call they've answered to live out the Gospel message to care for "the least of these."

And that ties to the future of GSR. Religious life is at an inflection point, and how it evolves isn't yet clear. We'll continue to write about the shift in religious life as congregations in the United States and Europe age while those in Africa, Asia and Latin America grow. Members from African and Asian countries are increasingly taking leadership roles in international congregations.

We'll continue to write about sisters' ministries, how they are being transferred in many cases to non-vowed leadership in the United States, and the role of oblates and associates as they outnumber sisters in more congregations. We'll continue to cover how sisters strive to improve the lives of others through their efforts in the United Nations, influence in corporate boardrooms and work in urban centers and tiny villages around the world.

And we'll continue to seek to improve how we do so. During a recent interview with leaders of LCWR and the International Union of Superiors General, we asked what we should be covering that we're not. The answer: Put more emphasis on the life, not just the ministries. Focus more on the "why" and the "how" of religious life and not so much on the "what," since the ministries are an expression of that life. Better reflect in our journalists' stories, not just the sisters' columns, that "the life" is a prayer life, a shared life and a vowed life. This is deeper than spirituality, it was noted, as many people are prompted to do good works as an expression of spirituality.

That observation sparked a lot of discussion among GSR editors, writers and liaisons to sisters on how we do that. It's another reason why I offer those two words — "proud" and "humbled" — as we embark on what we hope are many more years of coverage of Catholic sisters and providing a valued venue for their voices.

[Gail DeGeorge is editor of Global Sisters Report. Her email address is gdegeorge@ncronline.org. Follow her on Twitter @GailDeGeorge.] 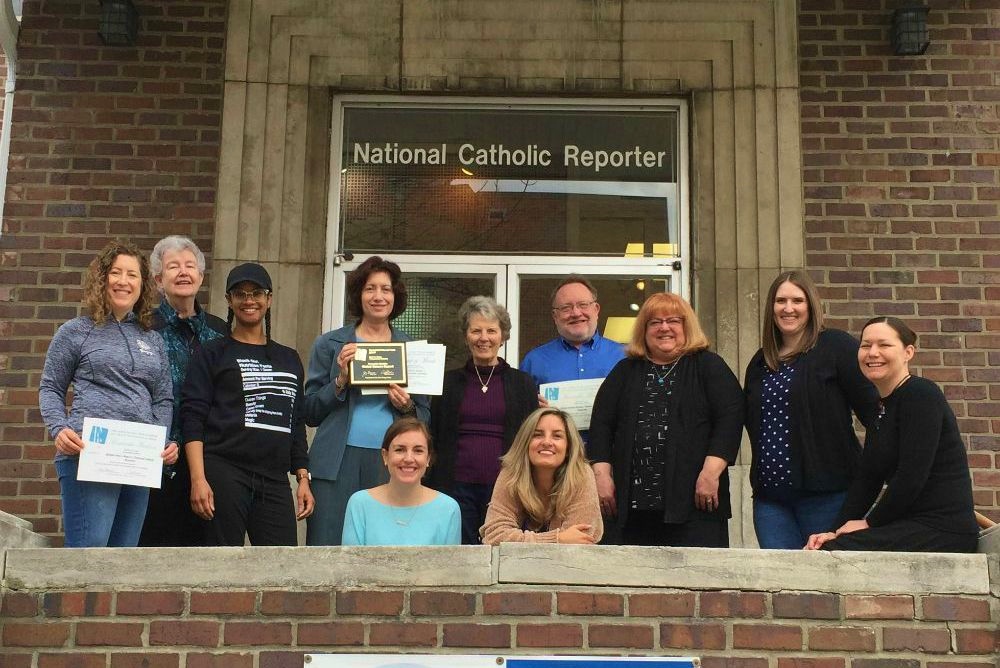 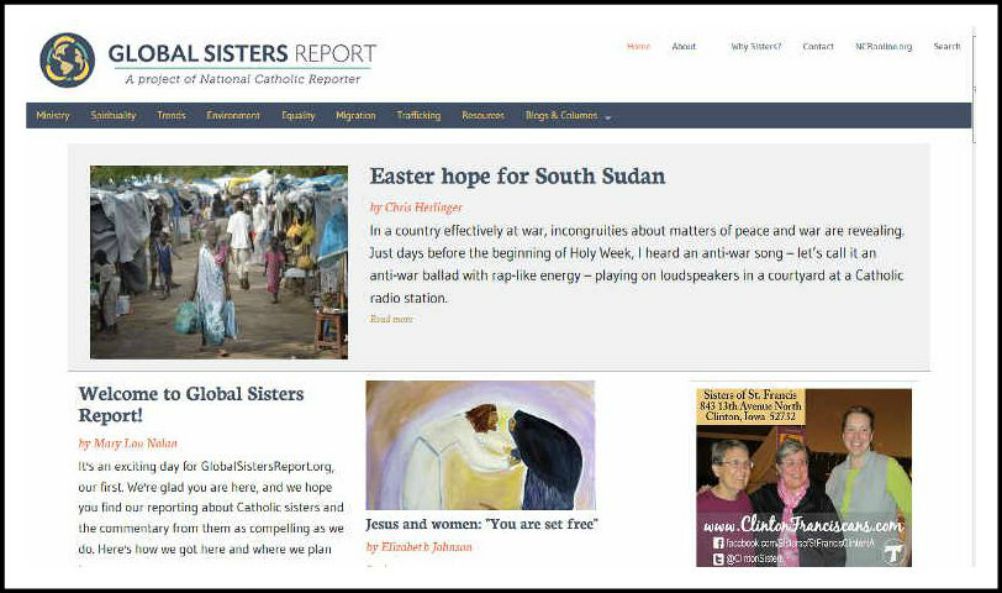 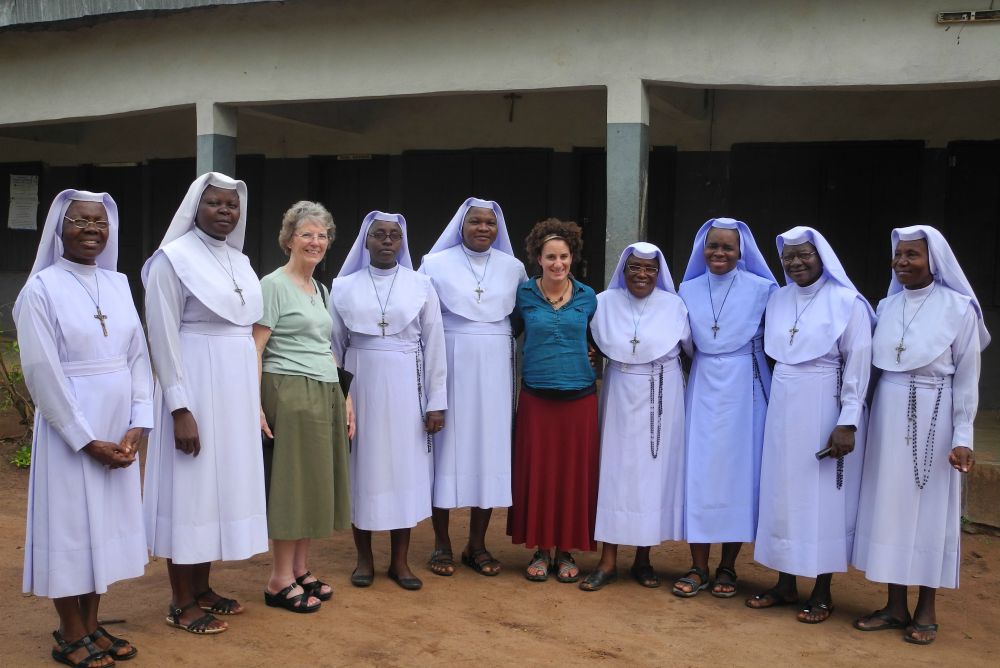 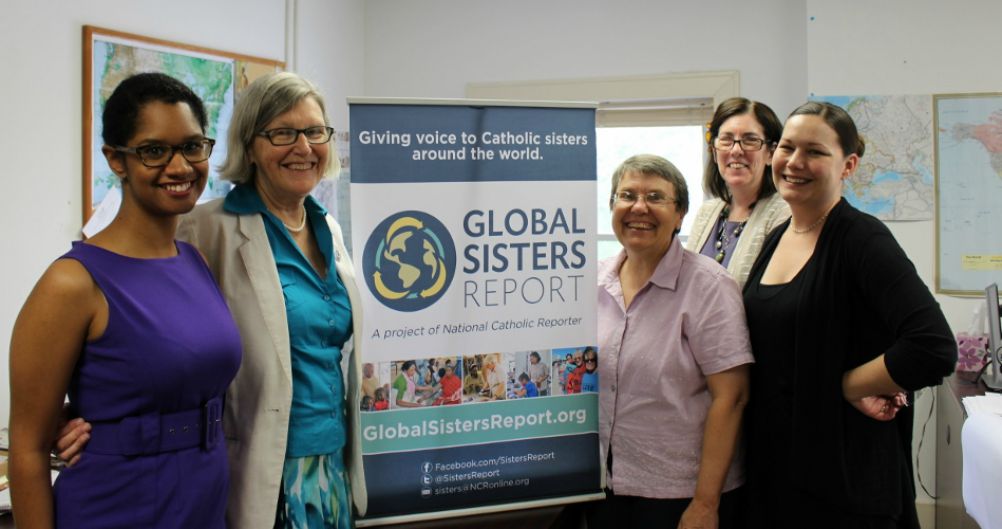 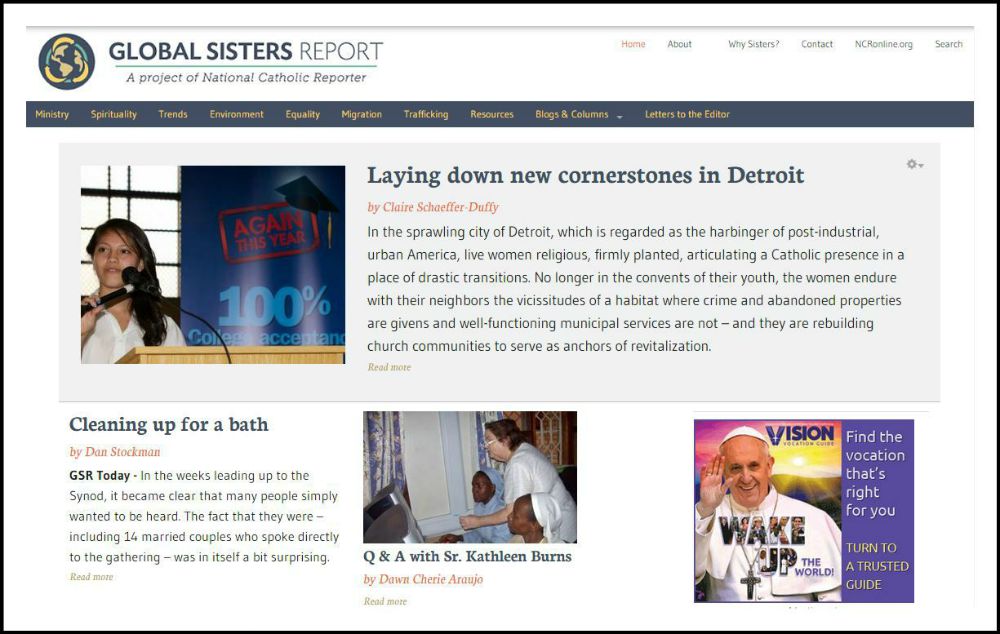