Notes from the Field includes reports from young people volunteering in ministries of Catholic sisters. A partnership with Catholic Volunteer Network, the project began in the summer of 2015. This is our seventh round of bloggers: Viviana Garcia-Blanco is a Dominican Volunteer at the United Nations and Geri Lanham is a volunteer with the Religious of Jesus and Mary in Gros Morne, Haiti.

Veterinary technician Songé Sengela stands 5-foot-nothing, but she is a force of knowledge.

She is certified by the Ministry of Agriculture to treat chickens, cats, dogs, donkeys, horses, goats, and cows. Songé gives interactive formation sessions for families who receive goats as part of the Caritas goat program in the Gros Morne parish. She tells them the vaccination and treatment services she offers as a veterinary technician, but she also teaches program beneficiaries to be engaged with their animals and knowledgeable of good preventative animal-care practices. Participants who follow her advice raise healthier animals that will sell for a better price at the Friday animal market in Gros Morne.

Goats are called the "bank of the peasants" because they act like a savings account that can help the family respond to a need when the goat is sold. Goats have a gestation period of five months, and they regularly have multiple births. Although goats require some expense — they need a lean-to to protect them from the elements and a regular source of food and water — they are considered a worthwhile investment.

Songé works at Grepen Agronomy Center, but she regularly holds mobile clinics in the neighborhood zones where families have received goats. These clinics are held for a small fee and are open to anyone in the community.

On the morning of April 28, Songé held a goat clinic in the zone of Fon Ibo. Students from Lekòl Jezi-Mari whose families have goats led their goats to the clinic on long tether ropes, just like someone would walk a dog on a leash in the United States.

As the goat owners began to assemble with their brown, gray, black, white, and speckled goats, Songé started the first consultation. She measured the size of the goat and asked the owner what the goat has been eating lately. Songé offered advice about goat diets and reminded clinic participants that rainy season has started, which means they will be able to give the goats more green leaves to eat. She helped them to identify foods like moringa, which provides a lot of nutrition for the goats and grows well in this region, so it is not cost-prohibitive.

Songé then prepared syringes with vitamins and vaccines. A few of the students began to get nervous and asked Songé to confirm that the needle was for the goats, and not for them. She replied that it was for the goat, but the students would have to be brave for the goats and help them to stay calm, just like their moms do when they have to get a shot at the doctor's office.

The first goat owner held tight to the tether rope and held the goat's head while Songé made the first injection. The goat flinched a little but did not try to buck. After the second shot, the goat began to bawl loud enough for the whole neighborhood to hear. When Songé finished giving the third shot, the goat was pulling on the tether rope so hard she almost knocked down her owner. Even though the shots are painful, the goat owners know they are important for the continued health and growth of their goats.

One of the clinic participants has a goat that is losing its fur in tufts, covering the ground with its white fur as a sort of tropical snow. Songé used this case as a teaching moment to show the goat owners why it is important to have a shelter for their goats and to keep them out of the mud, where microbes can enter the body and make the goat sick. Songé gave the sick goat a dose of antibiotics and worm medication and told the owner she would make a house call next week to check on the progress of the treatment.

Two of the goats at the clinic are pregnant, and I asked the owners what they plan to do with the kid goats. One woman said it will be perfect timing: She will use the money from selling the young goat to buy her two children new shoes and uniforms for school. The beginning of the school year is a difficult time for family finances, as each school has an entrance fee and requires a uniform and books. The sisters who brought the other pregnant goat said they will use the proceeds from the sale of the kid to buy some tin to replace part of their leaking roof.

All of the goat owners agreed that the goat is a benefit for their families, and they will continue to raise goats. One black goat in particular is very healthy, and Songé asked everyone to gather around and look at it. Then she asked the owner to explain how she takes care of the goat so the other goat owners could learn directly from one of their neighbors who is having success with this program. Songé supports these goat owners with her veterinary expertise, but she also gives them the capacity to think about problems they are facing and make informed decisions about goat health. 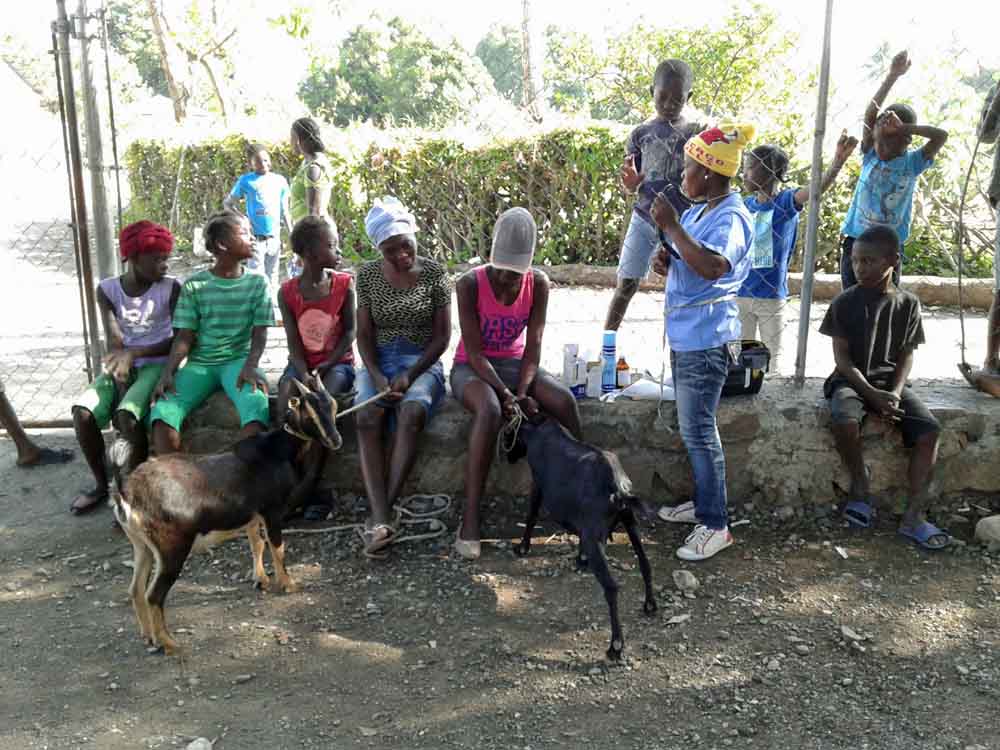 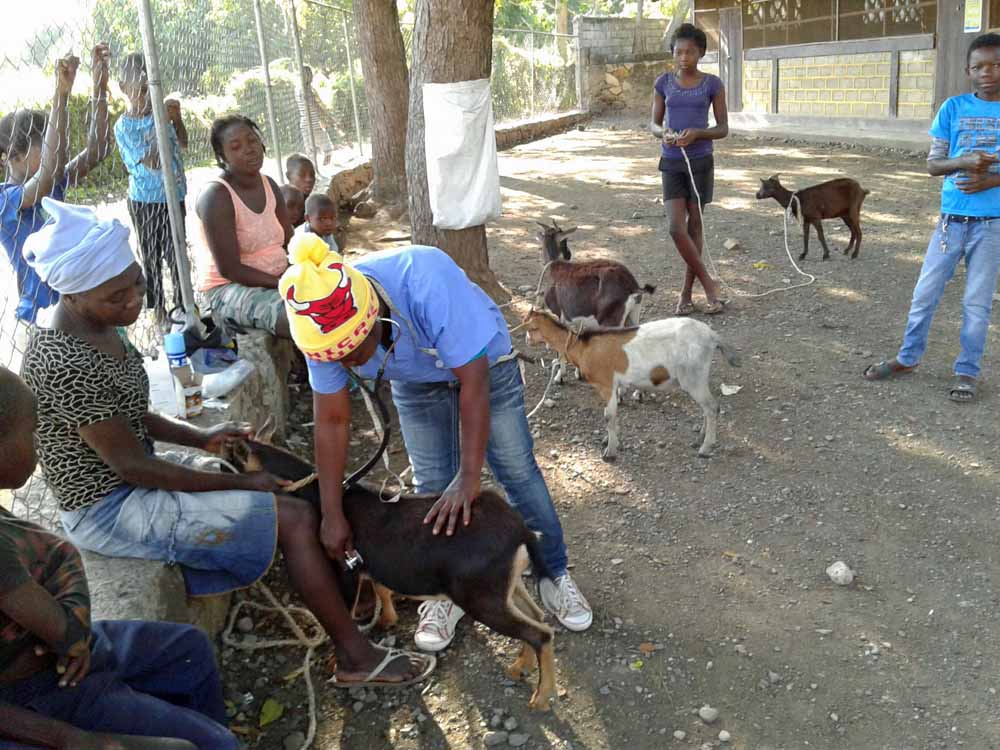 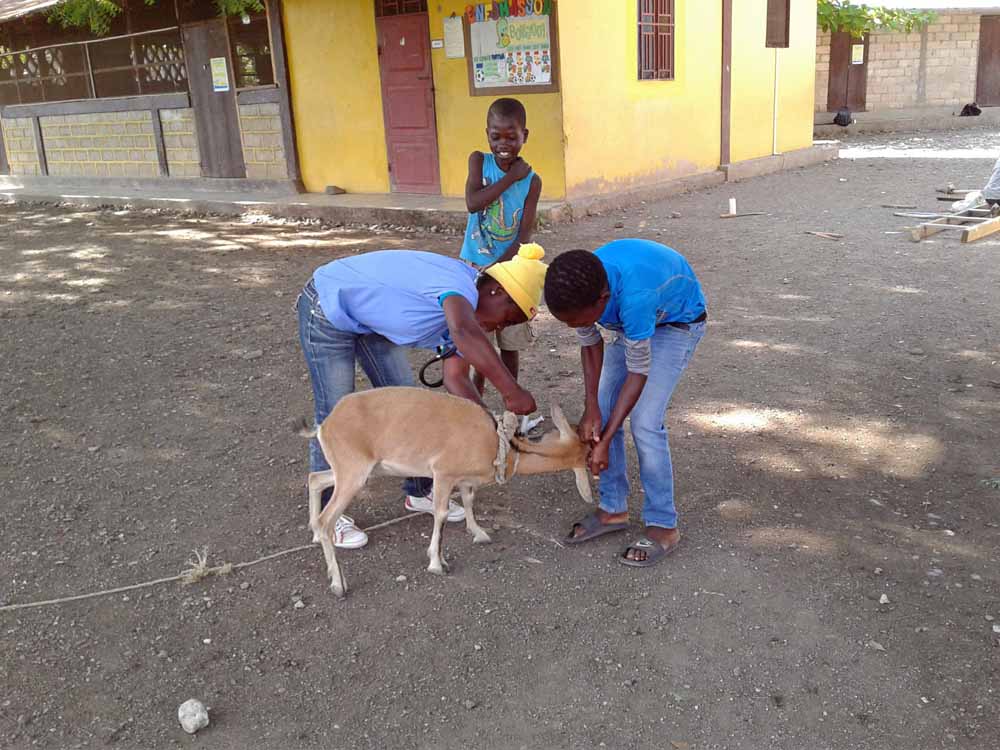