Sr. Elisabetta Flick, an Italian sister of the Religiosa delle Ausiliatrici del Purgatorio (Helpers of the Holy Souls), heads a ministry of the International Union of Superiors General, or UISG, to assist arrivals on the Italian island of Sicily.

"The project, based in Agrigento and Ramacca in Sicily, took shape after two women religious asked leaders at UISG how their communities, the Comboni Missionaries and the Missionary Sister Servants of the Holy Spirit, could respond to the crisis," GSR contributor Traci Badalucco wrote in her September 2016 report on the project. "The executive board at UISG also wanted to contribute, so the board decided to mark its 50th anniversary with the migrant project."

Now in its third year, the ministry is meant to accompany arrivals on an island that has received tens of thousands of migrants in recent years. Many are from Libya and other African countries who embarked on a treacherous journey on the Mediterranean Sea from their home countries and arrived in Sicily.

Complicating the situation now is a 2017 agreement between the governments of Italy and Libya to limit the flow of refugees to Italy. As part of the agreement, the Italian coast guard provides boats to Libya that are used to return migrants trying to get to Italy by sea.

This interview was conducted in May in Rome with translation assistance from Sacred Heart Sr. Florence de la Villeon, who heads the overall UISG migration ministry.

GSR: Give us some idea of the changes underway in Sicily and elsewhere in Italy.

Flick: The Italian government signed an agreement with Libya so that people on the seas are turned back to Libya. The effects on numbers are clear: 500 people arrived [in early May], about half of what the numbers were in September, when 1,000 people or even 2,000 were arriving in Sicily each week.

The Italian government is a right-wing government, and they've made clear that the focus is to prevent people from arriving and to return people to their home countries, even those who have settled in the country but who have not been recognized officially as refugees.

There is also talk of closing a big center for migrants in Cara di Mineo in Sicily, where more than 3,000 people are waiting to hear about their legal status.

Those who are not detained but are looking to settle face public hostility. Some villages are afraid to welcome them, thinking they will become criminals, that they will take jobs and that their presence in some ways will cost the public money. Sicily has a large unemployment rate now, so there is a fear of people from different countries.

The other dynamic is that many migrants don't want to stay in Italy but hope to pass through on their way to Germany, Norway, England, the northern European countries. Italy is often just seen as a corridor, a welcome space, before going elsewhere. But that is changing. Because of the Dublin Convention, an agreement by the EU, when migrants come into a country, they have to register and stay in their first country, and so increasing numbers of people are staying in Italy.

In your experience, what migration patterns have changed in recent years?

People have always come to Italy, but not like this crisis, not like these numbers. Thirty years ago, we had many arrivals from Somalia and Ethiopia. Today, many people come from other African countries, all headed to Italy, Sicily, Greece, Turkey.

What do the people coming have in common?

Smugglers are a huge business. Desperate people pay so much to the smugglers not only on the seas, but once they arrive. That is why the humanitarian groups like Caritas and Saint Egidio have worked with officials to create humanitarian corridors so that people with special needs — like families with children, the elderly — can enter legally [from displacement camps] and cut the need for the smugglers.

Since we reported first reported on the Sicily project, what changes have occurred?

It's a program that is changing day-by-day. But that's because, as I've said, the overall situation in Sicily has changed. Five sisters left the program, but five have arrived to take their places, so we still have a total of 10 sisters working, and in three communities rather than two. The sisters continue to do pastoral work in welcome centers, providing some legal counseling but mainly pastoral work. People want a pastoral presence, to pray and have someone listen to them.

Then we are still meeting people on the street. As a gift, we received two small vans, which we use to meet people, provide some very basic medical services, counseling, and also visit people in the hospitals to assist them during medical consultations. It's very small-scale work, and we have always known that.

Cardinal Francesco Montenegro [the president of the Commission for Migration of the Italian Episcopal Conference and a strong supporter of efforts to assist newcomers] says he recognized that our work is difficult — dealing with people who are hiding "in the bush."

I think in many ways, the work is more about accompaniment than anything else, but it's also becoming more important, in a way. People on the street are asking for accompaniment, to have a relationship with other people. To be recognized as a person, to be respected: Those are the important things.

I am guessing it's often challenging work.

The needs are great. The people from Africa only speak African languages, but they very much want to learn basic Italian — and they've been here three years. We are lucky that in having a large of Pakistani migrants, we do have one sister who speaks Urdu.

Do you feel the situation is changing in fundamental ways?

With the numbers declining, it's no longer an emergency. The problem is now integration, how to integrate people into society. But there are so many challenges involved with that — trying to find people work.

We have one Italian sister who rides a bicycle, as do many of the young people who have arrived. She has been helping them repair bicycles and would like to open a repair shop. She is acting as a bridge between the migrants and the Italian bicyclists in Sicily.

We are trying to work, to provide accompaniment, that others aren't doing. And in doing that, we're not afraid to work with others from different traditions. The Mormons, for example, have provided us with medicines and in the future will provide us with a shower, a washing machine.

How has the public in Italy responded to the overall situation?

The "ultra-right" is promoting an agenda that works on the fears of people. But that's not the whole story. You can find people [everywhere] with a big heart, and you also find people absolutely against the migrants — and you will find these different types of people in the same parish! The pope, the cardinals, many others are challenging our communities, saying that people need to live together. I think the bishops are speaking and doing a good job — maybe not all, but generally. The ones I know are very sensitive to this question.

Sisters tend to be very modest about their work. Is that true of the sisters working in Sicily?

Yes. The sisters, each one is doing little things. They will say, "I'm doing nothing!" They talk about being present in silence, of just going out on the street. I understand their frustration. The sisters in Sicily have traditionally been in the convent, so it's unusual there to see sisters in this new kind of ministry. But I see our sisters doing their work. And when you see sisters from four countries living together, interacting with people, you see this is a beautiful experiment and how beautiful this testimony is. People are calling them our sisters of the world. 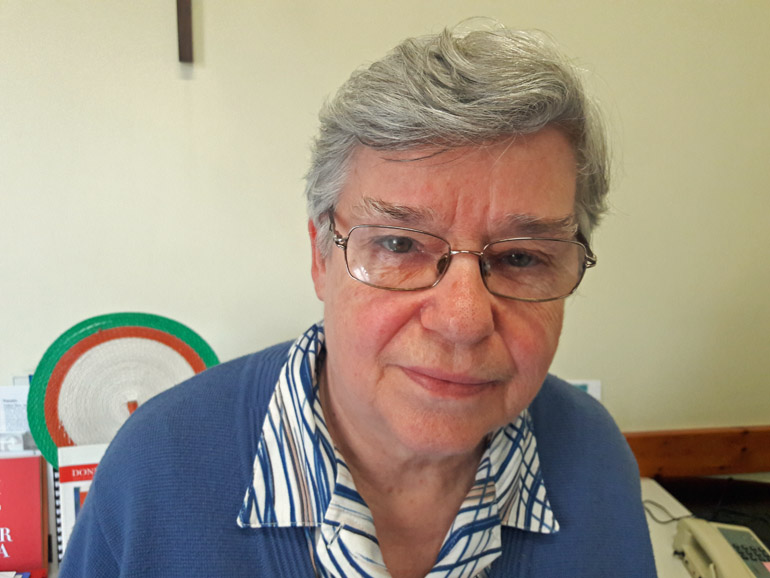 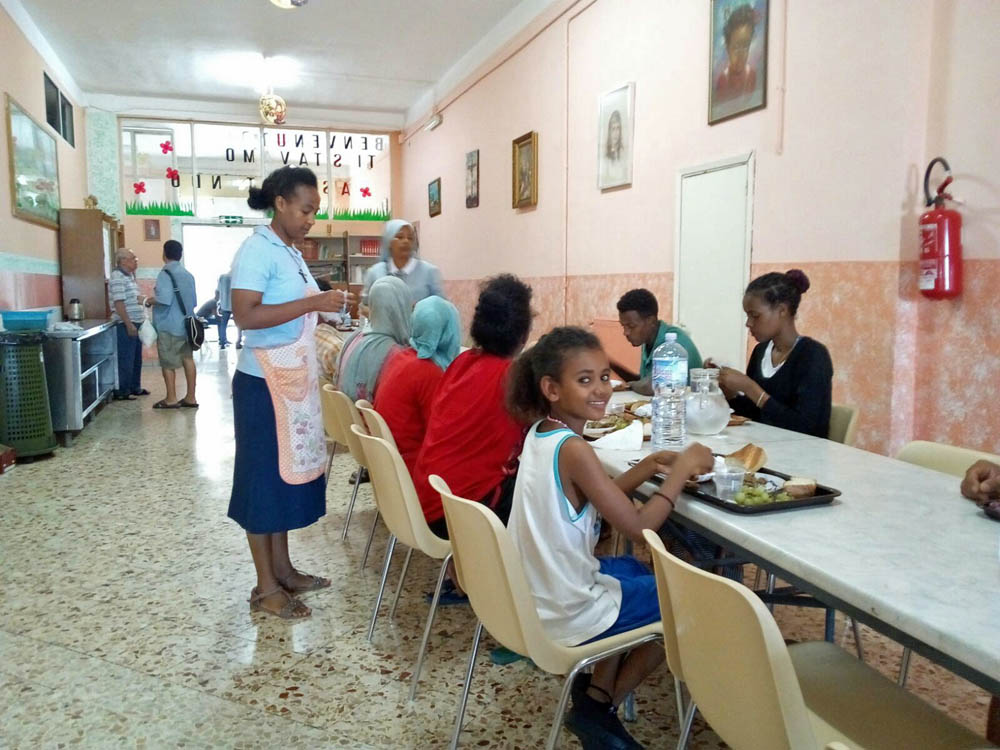 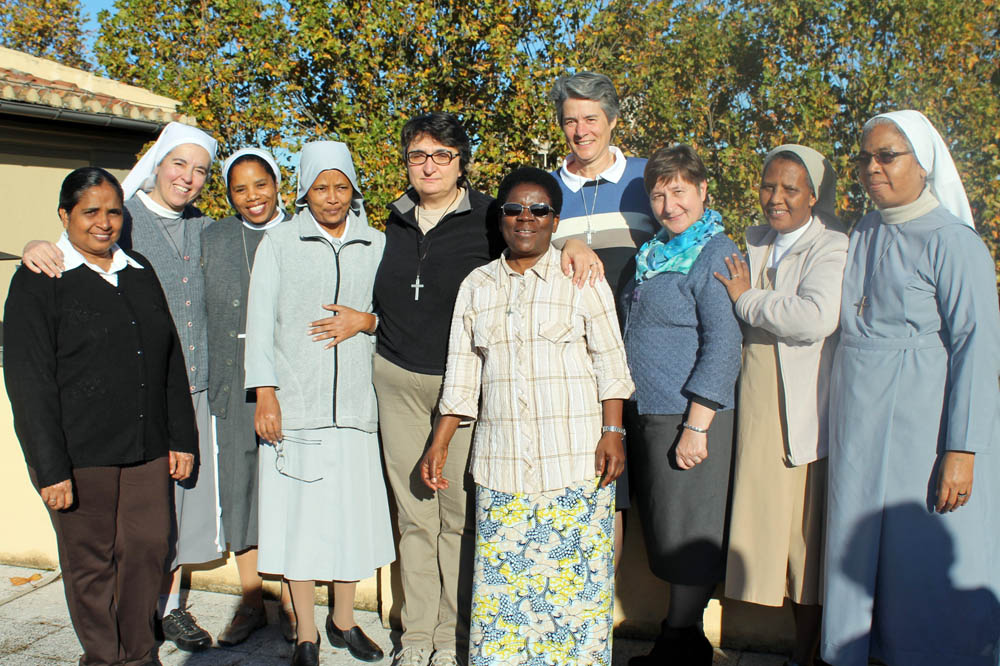