Q & A with Sr. Angela Reed, seeking to address the root causes of human trafficking 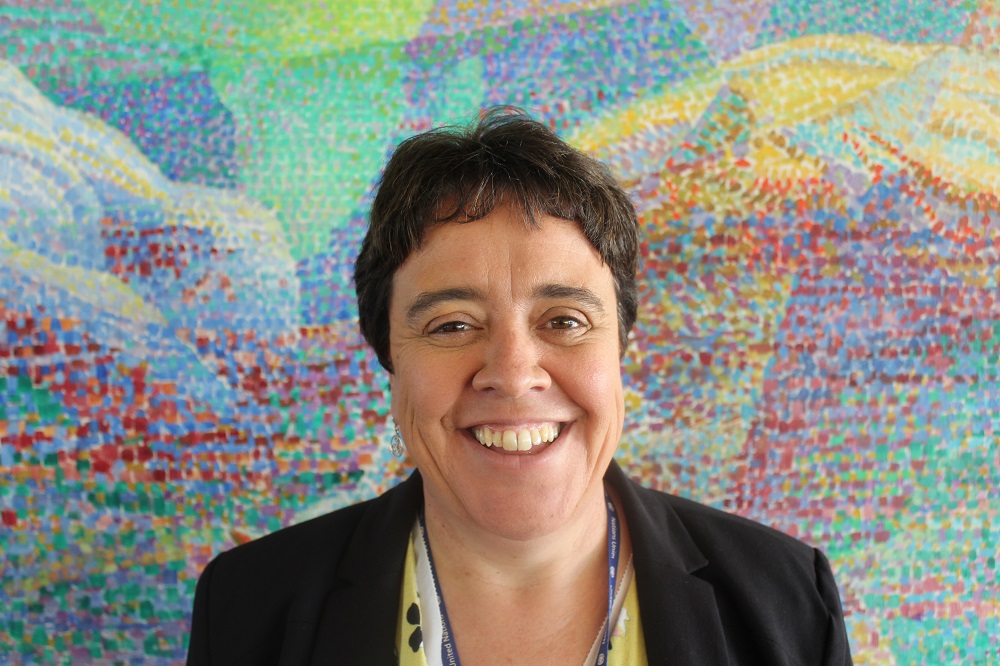 Reed holds a doctorate from RMIT University in Melbourne, Australia, where her research focused on trafficking and the experiences of Filipina women trafficked for sexual exploitation. Reed is a sought-after speaker on the issue, speaking in late 2016 at the University of Notre Dame, for example, and at a March 13 event sponsored by the Permanent Observer Mission of the Holy See during the U.N.'s Commission on the Status of Women.

While Reed says demand stemming from human trafficking must be addressed, she is a passionate believer that supply cannot be ignored.

"We need to challenge the dominant narrative [of] ... human trafficking as a random act of victimization to a more systematic process of cumulative marginalization leading to victimization," Reed said at the March 13 U.N. forum.

She advocates for trafficking survivors telling their stories at forums like the United Nations.

"Formerly trafficked women and girls challenge the view that being trafficked for sexual exploitation is a single, isolated event in their lives," she said. "Instead, they draw attention to human rights violations and systematic oppression" across their life trajectories.

A cornerstone of Reed's advocacy is that human trafficking must focus on prevention, utilizing a concept she developed called Optimal Life Course Conditions for girls, adolescents and young women. These conditions, if in place, could go a long way toward curtailing the trafficking of girls and young women, she says.

GSR: Explain what you mean by Optimal Life Course Conditions.

Reed: They stem from my research with 40 trafficked women in the Philippines and are based on what I've concluded from that research: If these conditions — like an adequate standard of living, quality education, safety, gender equality — were in place for many girls and young women, then the vulnerability to trafficking would be reduced significantly.

There are 14 OLCCs, and they are clustered in three stages. In childhood, they include adequate standard of living, quality education, safety and security. In adolescence, they include psychosexual health and development and long-term life skills. In young adulthood, they include decent work and economic empowerment, community cohesion and personal security.

One of the challenges in advocacy work against trafficking is the way the problem has often been framed in terms of criminal justice. There is an idea that if we catch the traffickers and punish them, trafficking will somehow end. But the women I know challenge this. Yes, absolutely, we have to deal with demand and the role of the traffickers. But we have to stop the supply, and that means making girls and young women less vulnerable to exploitation. Naming these life-course conditions is a step in that direction.

More widely, that means implementing all of the SDGs [the U.N.'s global goals for reducing poverty and improving social conditions], not just those, like Nos. 5 or 8, that deal specifically with gender. So if you provide opportunities for development and safe spaces and opportunities for all people, then you can reduce vulnerabilities, especially for girls and young women. Of course, I am not saying the SDGs are perfect. They are goals that nation-states and the global community should aspire to.

That seems like a harder way of explaining the challenges that trafficking poses.

I object to the notion that anyone can be trafficked as if everything can be reduced to girls and young women being plucked from the streets. Of course, you will find examples of that happening. But usually, it's not a random act. The larger dynamic is that trafficking tends to be at the far end of a continuum of violence and exploitation that already existed in many girls' lives. 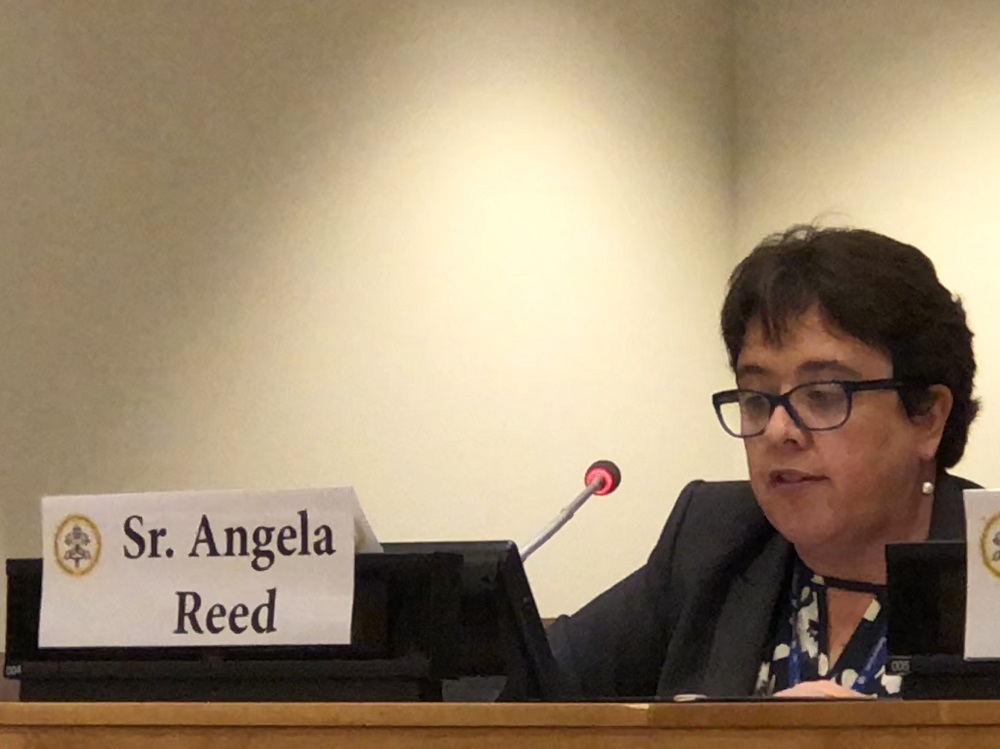 Sr. Angela Reed discusses human trafficking at a March 13 event sponsored by the Permanent Observer Mission of the Holy See during the U.N.'s Commission on the Status of Women. (Courtesy of Mercy Global at the United Nations)

Yes. They are responsible within their countries for the advancement of human rights and to improve conditions socially and economically so there are more opportunities for women and girls and they are not so marginalized.

But I realize that this rights-based approach is not a popular response to human trafficking. It means a lot of long-term investment: nation-states investing in education, in basic human services. I don't like to frame it in economic terms like that, but if you look at the costs of exploitation — recovery, prosecution of traffickers, policing — in the long-term, it's more expensive to deal with the aftermath of trafficking than prevention.

And it's not just framing it in terms of economics. Let's ask the women themselves what they think. They tell us where to put our emphasis: making sure that human rights are secure in the home, that a right to education is respected.

I was challenged by a Filipina woman who said, "There are many people who are living in poverty. But they're not trafficked." So the challenge for me was to look at the multiplicity, the interplay of factors that contributed to their being trafficked. The biggest factors are systems that continue to marginalize women and girls, as well as societies turning a blind eye to these injustices and forms of exploitation that make one vulnerable.

So you are saying narrowing it down to poverty is simplistic?

The causes are complex. It's the interplay of the political, social, economic and the environment. When there is meeting of vulnerabilities, that's when people can become vulnerable to trafficking. Look at the issue of water and sanitation. When women and girls have to walk miles to draw water, they can become vulnerable to attacks. And of course, when the girls are fetching water, they are not in school.

What other factors are involved in this legacy of violence against women?

The legacy of colonization and patriarchy has contributed to the way women have been treated. Patriarchy may be the most obvious: the power dynamics between the sexes. Colonialism is maybe harder to discern, but the Philippines offers a good example of that legacy. The country was exploited by outsiders from a Western patriarchal model, and the wisdom of those within the country was ignored. It was a violation, it was violence.

And that model continues in many parts of the world. Look at the extractive industries, look at mining towns in which industries fly in and fly out. This happens in Australia: Mining might bring prosperity to a town for like 10 years, but then the industry leaves and destruction is left. The earth is exploited, but so are women who become victims of sexual exploitation in that boom-or-bust environment.

This is a common dynamic in rural places. I've talked of supply and demand, and in my research in the Philippines, people mentioned the oversupply of young women. I thought at first that was crass. But actually, there is truth to it. In these rural places, there are so many young, undervalued, desperate women.

What sustains you spiritually?

I believe in the right of every person to flourish. I've had a relatively privileged life. Even with moments of challenges, I had a safe and secure family and childhood. Supports have been in place in my life. That should be available for everyone. I love the quote from Jeremiah [29:11] that God's plans for us are full of hope and not disaster or harm.

It's very important that women flourish and have choices in their lives, and that really stems from the idea that we are made in the image of God and that we have to affirm that, affirm human dignity. I have faith in God, who is overarching and loves us all.

Ministry | Q & A with Sr. Angela Reed, seeking to address the root causes of human trafficking

Q & A with Sr. Joan Mumaw, providing an update on South Sudan